“White Americans seem to think that if they just do sort of emotionally or drastic things that black people are going to say, ‘Oh my God, white people love us because they took down a statue of Stonewall Jackson.’” 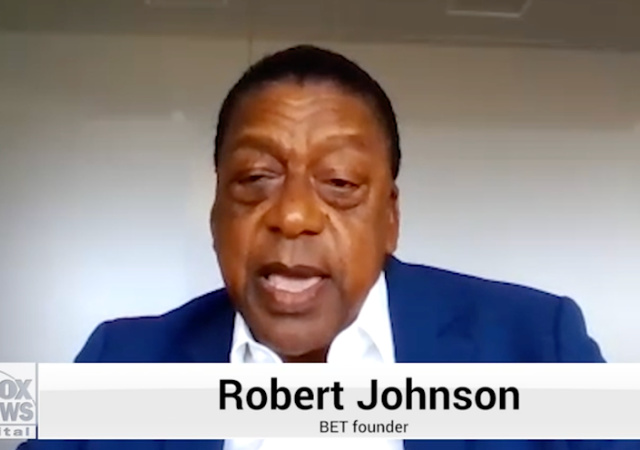 BET founder Robert Johnson rolled his eyes at people tearing down statues, even the Confederate ones, along with brands changing their marketing, canceling shows and movies, and firing professors (emphasis mine):

Johnson, who became the country’s first black billionaire in 2001, has made a $14 trillion pitch for reparations to descendants of slavery. But he said the movement to take down statues, cancel TV shows and fire professors does nothing to close the wealth gap that has persisted since slavery.

It’s “tantamount to rearranging the deck chairs on a racial Titanic,” Johnson told Fox News. “It absolutely means nothing.”

Johnson described these people as “borderline anarchists.” He pointed out that bringing down statues and those other actions will not put a dent in what really could help the black community (emphasis mine):

Johnson also criticized the celebrities who apologized for their race:

He also mocked white celebrities for what he described as apologizing for their race in emotional social media speeches.

“You know, that to me is the silliest expression of white privilege that exists in this country. The notion that a celebrity could get on a Twitter feed and say, ‘oh, my God, I am so sorry that I am white.’ I don’t find any black people getting on Twitter and saying, ‘Oh, I’m so sorry I’m black.’ And we got the worst problems. … My thing is: embrace being white and do the right thing.”

“White Americans seem to think that if they just do sort of emotionally or drastic things that black people are going to say, ‘Oh my God, white people love us because they took down a statue of Stonewall Jackson.’ Frankly, black people don’t give a damn,” Johnson added.

He stressed that “white Americans need to ask black Americans what they really want.”

Is Johnson wrong? No. Kemberlee blogged on Wednesday night that people in Wisconsin threw a statue of Hans Christian Heg into a lake.

Heg was anti-slavery. He fought slave catchers. He died of wounds he got from fighting for the Union in the Civil War.

The family of the woman who portrayed Aunt Jemima is ticked Quaker Oats is changing the brand.

Johnson has no problem criticizing people on the left. In July 2019 he told CNBC that the Democratic Party moved “too far to the left” and praised President Donald Trump:

“And for that reason, I don’t have a particular candidate (I’m supporting) in the party at this time,” he said. “I think at the end of the day, if a Democrat is going to beat Trump, then that person, he or she, will have to move to the center and you can’t wait too long to do that.”

“I give the president a lot of credit for moving the economy in a positive direction that’s benefiting a large amount of Americans,” he said. “I think the tax cuts clearly helped stimulate the economy. I think business people have more confidence in the way the economy is going.”

notamemberofanyorganizedpolicital in reply to Paul In Sweden. | June 25, 2020 at 3:12 pm

Is BET airing it?

This is the Swamp in high gear protecting someone who, until Friday, no one in the U.S. even cared about.

And now, firing a U.S. attorney is beyond the pale, an example of lawlessness, rampant authoritarianism and all the rest of the usual bromides.

Every time Trump opens his mouth is one of these ‘wow, just wow’ moments and it’s tiresome.

After a series of setbacks in the Supreme Court, where it’s clear Chief Justice John Roberts is compromised in a fundamental way, Trump and Barr going after Berman makes sense. It was Berman oversaw the raid on Jeffrey Epstein’s home and who is, apparently, still in control over what can be done with the materials gained.

You can see how forcefully this defense of Berman is turning into a circus, quickly, as they flip this into another round of ‘Impeach Trump’ for doing his job….

I self identify as black

I assume I would be eligible for the $350,000 a person he wants as “reparations?

The only discrepancy of wages sir, is when a white person does a job a black person is not qualified to do. Not that there may not be a black, Asian, or Indian capable, but maybe they just didn’t apply…

Second sir, there is so much money out there for higher education if you are black, unless your counselor or parents are dumb, blind, and deaf, you shouldn’t have any issue with affording college.

The problem is the breakup of the family secondary to welfare. No fathers for these boys and girls running wild . It takes a strong God fearing woman to raise a boy through teenage years without a husband, and that sir is just the truth.

Get rid of the ghetto music and culture, support black families and see how quick and far you all rise…

That’s what America needs—a billionaire lecturing us peons about the “wealth gap.” Un-huh.

…And, he made billions pandering to a skin color. My cable provider doesn’t carry “WET”

then decided to sell out to a big corporate conglomerate, he could have given shares to people and enabled their wealth

Black Americans deserve the same rights, consideration, and fair treatment as anyone else: No more and no less.

Black people are just a tool the Democrat communists are using to tear down Western Civilization. Once they are done they won’t give a hoot about Black lives.

You know the Ds never cared about Black Lives by their constant pushing of abortion – the #1 killer of black lives.

This is a really astonishing string of blatantly and explicitly racist statements.

Oh my, he paraphrased Rhett Butler in Gone With the Wind.

I don’t buy the reparations nonsense, but he’s right that all the shenanigans – rioting, looting, iconoclasm, and all-around destruction – doesn’t do a damn thing to help the black community or improve their situation one whit.

Anybody – black, white, green, purple, I don’t care – has to first want to change. Bitching and moaning about victim status just keeps you trapped in the prison of your own mind. Success is the best revenge, but it won’t happen as long as you point the finger at everyone else for your problems, and it sure as hell won’t happen as long as you’ve got a bad case of the “gimme-dats.”

that correct? Trillion not Billion??

He said Trillion with a “T”

With an estimated 42 million Blacks in America, $14 Billion would be less than $400 each

I refuse to pay for something that happened hundreds of years before I was born.

my ancestors were still in Europe at the time of the Civil War, On another front let’s sell of Yale first, that would be a good downpayment

Mine were still in Europe, too. Didn’t get here until the mid to late 1880s.

So he can shut the hell up…

Millions have died for their freedoms, yet the Blacks don’t seem to care there are more slaves today , estimated at over 40 million in Africa, ME, China and brought across our borders in the sex slave trade in America!

So until the race slave mongers are willing to stand up and fight that crap, Acknowledge that white America died at over 500,000, new estimates up to 600,000 for their freedoms, don’t cry to me…

I seek reparations for “No Irish need Apply” history of discrimination. A free beer would be fine.

Remember historians tell us there were more white slaves in this country then there ever were black.

That doesn’t seem plausible. Not if by “this country” you mean the USA. Who are these historians, and what is their factual basis? There were a lot of black slaves, over the years; where did all these white slaves come from, and how many of them could there have been?

Take half a loaf. He’s right about some things, wrong about others.

notamemberofanyorganizedpolicital in reply to Comanche Voter. | June 26, 2020 at 12:06 am

IOW he’s only half NUTZ.

In 2018, Johnson was praising Trump for his Opportunity Zones and Auto Portability plan that helped blacks gain wealth, and now he’s worried about the Dem party which has done nothing?

It doesn’t matter. No one can stop the Left’s holiness spiral; they all must signal to avoid being “cancelled”. Tragedy of the commons.

In the end , Black is thicker than anything in 99.9% of them

Just the truth, don’t be a hater

Johnson has no problem criticizing people on the left. In July 2019 he told CNBC that the Democratic Party moved “too far to the left” and praised President Donald Trump

On one hand, on the other hand, always and forever. #PrinciplesMatter

I’m going to add this one to my “Check the Box” Liberals list along with, Attended BLM protest with hand made sign – check, Talked to a black co-worker last week – check, Voted for Obama twice – check, Tore down a statue of Grant or agree with the vandals – check. See I’m not racist even though I live in a pearly white neighborhood and cross the street whenever a black person is walking towards me. That’s the definition of a Check the Box Liberal.