“You were zero help. #PrimaryWarren Seriously. Just send me the ActBlue link for Warren’s challenger.” 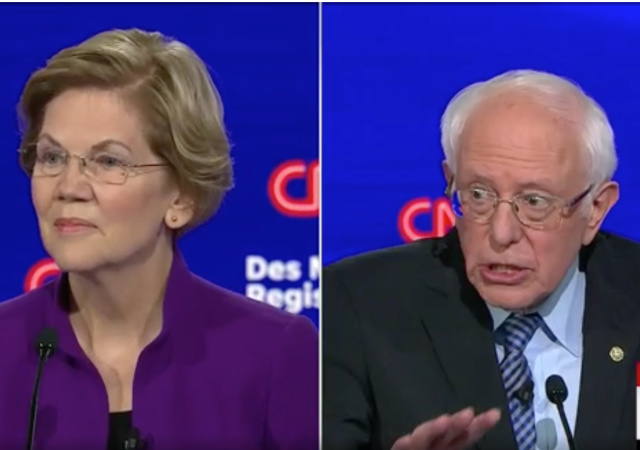 Sen. Bernie Sanders (I-VT) just dropped out of the 2020 presidential race. His former competitors quickly praised him on Twitter, but the Bernie Bros seethed at Sen. Elizabeth Warren (D-MA).

Thank you @BernieSanders, for fighting so relentlessly for America’s working families during this campaign. Your fight for progressive ideas moved the conversation and charted a path for candidates and activists that will change the course of our country and party.

Warren did not endorse anyone when she dropped out of the race. Bernie Bros never forget!

R u seriously fucking tweeting this?

YOU SHOULD HAVE ENDORSED HIM COWARD

Elizabeth Warren is tied as the most disliked Democratic Senator because she’s a ??? pic.twitter.com/MTpqd2f4AR

you will be remembered as the politician who stood between a progressive and the white house. take your hollow words and stick em where the sun don’t shine.

Seriously. Just send me the ActBlue link for Warren’s challenger.

Your endorsement could’ve saved his campaign. And America.

You literally destroyed his path to the nomination.

oh so now u got somethin to say

she’s obviously not a progressive, just run of the mill DNC politician, let’s see how her bet against the progressive movement pays off

Liz does the right thing, when it’s safest.

U didn’t endorse him ma’am. shut it

You were such a heartbreaking disappointment, Liz.

I can’t believe I fell for you.

sorry, you are a huge reason why he dropped out. you did not endorse him, you constantly tried to paint him as a problem & it got you nowhere but all of us never trusting you. hope you get that coveted Biden cabinet position! you were the biggest disappointment of this election

Yeah, after reading the comments from the Bernie Bros, that’s not really the kind of people I want in our government. I dislike Warren, but now I dislike Sanders more for associating and tolerating these people.

He didn’t just tolerate them, he encouraged them and led them.

I hate them all, but enjoy putting them in a jar, shaking it, and watching them fight. ?

I’m shocked you ever considered them people for our government.

Bernie quit because he had zero chance after his stupid Castro comments and heavy losses during “super Tuesday”. It was over then, as most candidates who were losers already saw.

He is looking to add delegates to have an influence on the party platform. He stayed in to get his payoff. It must be that the DNC is worried that Biden is tanking faster than the propagandists can cover for him, so they worked out their payoff to Bernie instead of letting him wither on the vine, and showing that even crazy Bernie is more mentally competent than Quid Pro Joe is.

Mos of the Bernie supporters I have met do not understand basic economics or what socialism really is. They are wishing upon a fading star.

Regardless, lets just hope they stay home on election day.

Or maybe some of them will vote for Trump.

bernie bros still don’t realize that bernie was only in the race to enrich himself? And documented liar liz Warren is only interested in one thing, which is enriching herself? Do they still not know the dnc is corrupt to the core? This is their “Fool me twice” moment. What comes next? “Fool me three times and I bern down a city?”

Exactly. Bernie took the payout in 2016, and then declined to go after Biden when he had the chance. He’s a coward, in addition to being a communist.

Sanders is not even a Democrat. He’s a Communist.
His supporters are a bunch of whiny hypocrites. They are trying to ride the wave on top of the Democratic Party infrastructure because they know they don’t stand a chance. The DNC is a corrupt cesspool, but Sanders and the whole Progressive movement are worse.

A bunch of whiny losers are all upset their favorite commie lost, again.

Bernie has collected quite a few zealots in his followings, just not enough to battle the National Socialist party.

I am now in the midst of deepest Schadenfreude: the disciples of Bolshie Boynie and Big Chief Pimple-on-her-Tongue having a go at each other!

Maybe Bolshie Boynie and his crew ought to try to get on the ballot as third-party, especially in more progressive states.

That’s a great idea. After all, Bernie was never really a Democrat, and his third-party candidacy would entice all his supporters to vote for him rather than Biden. Maybe Mike Bloomberg would be interested as well, and could run for VP on the ticket.

I struggle with which is worse; openly devout socialists who spout their stupid dogma like it is even vaguely sensible (not to mention compatible, with American values, FDR and every democrat elected since not withstanding), or the deluded democrats who still perceive themselves to be American statesmen (or women) who believe in “liberty” and “transparent government”, of, by, and for, yatta, yatta, yatta…