Sanders Endorses Biden: ‘We Have to Make Trump a One-Term President’

Sanders Endorses Biden: ‘We Have to Make Trump a One-Term President’ 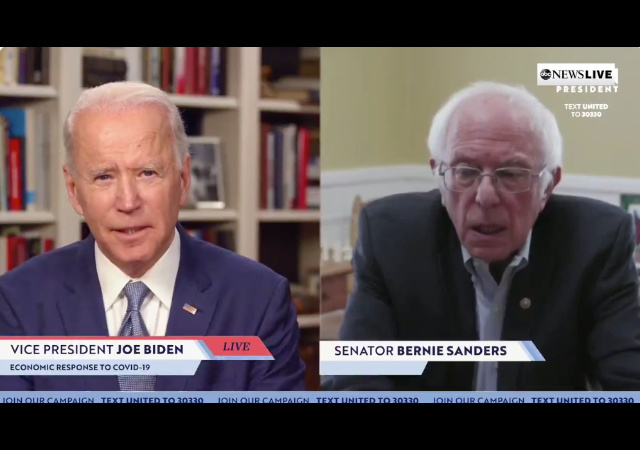 Sanders ended his campaign only five days ago.

The endorsement came during a live virtual event held by Biden about “the need for a full COVID-19 Economic Response.”

Biden told Sanders that his “endorsement means a great deal.”

He also said that he would need Sanders around “not just to win the campaign, but to govern.”

“If I am the nominee, which it looks like now you just made me, I’m going to need you—not just to win the campaign, but to govern.” https://t.co/VdNqFyl395 pic.twitter.com/nvrKsr7ve6

#BREAKING: Sen. Bernie Sanders endorses Joe Biden: “Today I am asking all Americans — I’m asking every Democrat, I’m asking every independent, I’m asking a lot of Republicans – to come together in this campaign to support your candidacy which I endorse.” pic.twitter.com/Ty1r9ligJx

BREAKING: Joe Biden to Bernie Sanders: “Your endorsement means a great deal…I’m going to need you—not just to win the campaign but to govern.” https://t.co/aE2u6rLZHD pic.twitter.com/05lnM3iYJP

The New York Post reported a few hours before the declaration that Biden began working with the Sanders campaign to avoid a fallout similar to 2016.

Biden’s actions might not work. We have detailed a few times that Sanders’ supporters will not settle for Biden.

Only 2 out of 5 Sanders supporters in Michigan confirmed they will support the Democratic nominee even if it is not Sanders.

To make it worse “four out of five voters said they would be dissatisfied with Biden as the standard-bearer for the Democratic platform.”

Sanders has sent some mixed messages. When he dropped out Sanders said he will stay on the ballot and continue to collect delegates as a way to keep the pressure on the Democratic Party to accept his radical ideas.

Biden did all he could to suck up to Sanders during the conversation. He lavished praise on the self-described socialist senator:

Joe Biden to Bernie Sanders: “You’ve been the most powerful voice for a fair and just America. It’s a voice like yours that refuses to allow us just to accept what is. You’ve refused to accept that we can’t change what’s wrong in our nation.” https://t.co/fSVgAdYi51 pic.twitter.com/bF6KSZdjBF

NEW: Joe Biden announces and he and Bernie Sanders agreed to establish 6 policy working groups on issues from immigration, to criminal justice reform: ”We're looking forward to turning that work into positive change for the country." https://t.co/fSVgAdYi51 pic.twitter.com/KV1BdMAJnN

Joe Biden thanks Bernie Sanders: “You put the interest of this nation and the need to beat Donald Trump above all else.”

“As you say, ‘not me, us.’ That’s your phrase, pal. And your supporters and I are going to make the same commitment.” https://t.co/fSVgAdYi51 pic.twitter.com/DEsknpWtMg

About that ain’t gotta happen

Mr. Sanders, I understand you need President Trump to be “one-term.”

However, I do not like you, nor anything you stand for.

Strange wording; indirect. Not “I am endorsing Joe Biden for president” but “your candidacy which I endorse” … like he’s recognizing the position more so than the person. Them’s weasel words.

DEM EXIT of all the Bernie Bros.

Has anyone here ever voted for someone based upon a third party endorsement?

I’ve scratched a few based on an endorsement.

Whatever their disagreements, Sanders and Biden(‘s handlers) agree on their common enemy: America.

Bahahahahhaha!!!! Is Sanders taping that from his new beach house???

The scariest part of this post is NOT Bernie endorsing Biden. It’s what Biden said to Bernie: “I’m going to need you—not just to win the campaign but to govern”. BUT TO GOVERN??????

Joe is planning on using Bernie’s crap socialist ideals to govern? That should make every independent and most sane democrats RUN to vote for Trump.

You don’t expect DEMentia Joe to actually govern, do you ?

The way Trump tore up Rubio, Jeb Bush, etc.
I’m curious just how Joe gets by a debate with Trump.

I can only imagine a “mercy rule” in the debates.

Remember how he shucked and jived in the VP debate against Ryan? That was shameful, but I don’t think he has the mental acuity to pull off such a stunt now. If he does debate Trump, look for Candy Crowley to come out of retirement and carry Gropey Joe through it.

Trump wouldn’t roll over like Mittens. He’d kick the shit outta Crowley and then proceed to dismember BiteMe.

In other words, Bernie falls in line as the Democrats go all in on cheating their way to the outcome they want in November. “By any means necessary”, because it’s about power and nothing else.

I’m guessing Bernie held on to his delegates as a bargaining chip. The Biden camp was able to offer Bernie enough to buy him off, hence the endorsement and Biden’s line about needing Bernie to govern.

Probably not VP, we were promised someone who identifies as a female minority.

Secretary of State? Ambassador to Russia? Maybe just promised support for his legislative [lack of] initiatives?

No question there was some wheeling and dealing going on though.

So Rachel Dolezal will resurface?

As if Biden’s campaign needed another nail in its coffin. Announcing his VP choice will be the sound of dirt hitting the lid.

The angry little Marxist prick who has never worked an honest day in his entire life endorses the angry, senile, old chester. You gotta love that Dim party, huh?

They are trying to keep the Bernie Bros on the reservation. With all the talk of that group not accepting Biden and possibly even – gasp – voting for President Trump, Bernie gets his payoff, endorses Biden – who might have already forgotten about it – Biden makes the claim of needing Bernie to help govern. Bernie won’t get any real role. It’s all for show, as it usually is with the National Socialists, designed to keep the Bernie Bro morons in line.
If the left lose a decent percentage of the Bernie Bros and minorities, like the blacks who have increased their support for Trump, even with massive fraud it will be tough for Dementia Joe to win.
It’s also why Soros is pushing for mail in voting. Never mind that over 16 million mail in votes were “lost”.

Being a principled communist, I’m sure Bernie didn’t ask for a thing from Biden or the DNC.

Today, I am asking all comrades….err um slip of the tongue, all Americans…yes, that’s it.

The bribe came through faster.

Sanders is a corrupt dirtbag.

Turn you volume down around mid way. This is one bernie sis who is going to really have a long, long, long cry. Surprised she hasn’t been made into a meme yet.

When I first started listening to Rush he used to mention the “dumbing down of America”. I didn’t always believe him but lately…..I like the ring in her nose. Trying to be nice.

Look for Bernie to acquire that fourth house (or twin engine turbo private plane) in the near future.

And to all you “Bernie Bros” out there (especially the ones who donated to that new house or plane):

They look like Statler and Waldorf from the Muppet Show.

They’re trying to make Trump a one term president? That’s racist. We learned that when Obama was president.