This only leaves Biden. 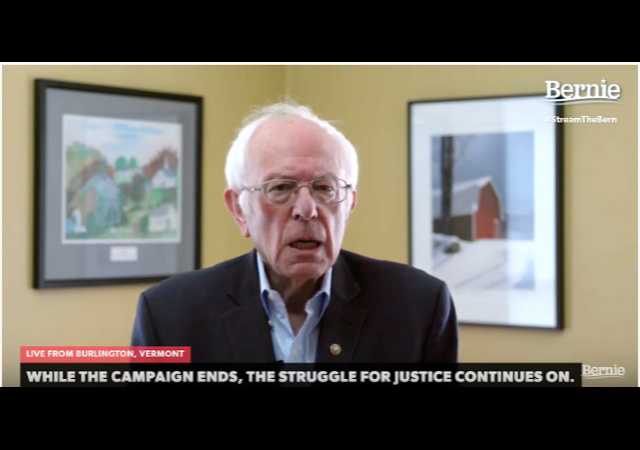 Sanders said he will stay on the ballot and continue to collect delegates as a way to keep the pressure on the Democratic Party to accept his radical ideas.

However, Sanders also congratulated former Vice President Joe Biden because he will become the Democrat nominee. He will support Biden so he can defeat President Donald Trump in November.

He said, “Together, standing united, we will go forward to beat Donald Trump.”

Sanders touted his connection with the youth, but he forgets that a lot of people change their ideology when they grow up. I used to like Sanders. Then I grew up and had to pay taxes.

Please join me at 11:45 a.m. ET for a special message to our supporters, live on our social media and https://t.co/vreIiWfeoS.

BREAKING: Sen. Bernie Sanders on Wednesday during an all staff conference call announced that he is suspending his campaign for president. pic.twitter.com/MzKS7Gabf1

In other words, the DNC check cleared?

chi towndemrevenuestream in reply to notamemberofanyorganizedpolicital. | April 8, 2020 at 10:48 pm

I SEE SOME OCEANFRONT PROPERTY IN BERNIES NEAR FUTURE

LOL. So how can they stealthily slide Cuomo in as the candidate now? Does the DNC have their own version of the 25th ammendment for POTUS candidates?

They can do it after the convention. I expect that, assuming they can keep Biden functioning that long, Biden will be nominated at the convention and they will keep him until shortly before the election and then look at the polls. If he’s tanking then they will pull a Lautenberg and replace him then. If he’s doing well they won’t risk it, and will go into the election with him; if he loses that’s the end of it, but if he wins they will replace him before the electors vote on Dec 14.

Legally it’s entirely up to the DNC; their electoral candidates are chosen for party loyalty, so one can expect that they will vote for the replacement.

Exactly. The Dem Central Committee has ruled and your scenario is about to play out. Now for the short list of substitutes. The VP slot is now a major issue. The visually clean way to replace Biden is have him suffer some issue and The already selected VP person elevate to primary candidate and then select replacement VP slot in your time frame. Final VP selection will be M. Obama. Elevated primary will be a governor. I think too early for Newsom. He is ready in 4 years as VP and 8 for presidential. I bet that path already set by Dem Politburo.

The replacement does not need to be the VP candidate. Biden’s promised to pick a woman for that, so I expect he will do so, but I do not expect her to become his replacement (unless she’s Michelle).

Or maybe, if he’s elected, they let him take office but have “the team” do the actual governing.

The people actually calling the shots will the be same people we’re taking about making these maneuvers to replace him.

No, because once he’s president he can dump them. They don’t want to risk it.

It might not be as easy for him to dump them as it is for them to dump him.

To be a fly on that wall, in that room, where they closed the deal!

I watched the live video. He said his name will remain on the ballot in states that have yet to vote and he intends to accumulate additional delegates in an effort to have leverage at the convention.

How big a house did they buy him this time?

“This only leaves Biden.”
Don’t be so sure. These are democrats that we’re talking about.

“On a practical note, let me also say this,” Sen. Bernie Sanders said Wednesday as he announced he is suspending his campaign for the 2020 Democratic presidential nomination. “I will stay on the ballot in all remaining states and continue to gather delegates.”

Biden may become the nominee… maybe… But now it’s really about the VP pick who can be expected to do most/all of the campaigning to showcase themselves for 2024. It won’t be Hillary. I am guessing Kobluchar.

… but the Joe Biden/Stacey Abrams ticket would make history

It’s going to be a losing ticket whomever the pick. The Clintons and Obamas beheaded the party to open the way for The Squad.

Yes, but The Squad is young and we have at most 4.5 more years of Trump. Assuming he wins the election the country is still up for grabs in 2024. Imagine an Omar/AOC ticket. I can feel the treason already.

Thank God he is out as he is the most dangerous person to seriously run for President in my lifetime, perhaps ever.

I fear that with yet another crisis upon us the trend toward a larger and more intrusive federal government will only accelerate as more and more people, particularly young people, will fall for Bernie’s nanny state ideas.

What a useless old buffoon.

He’ll be back. He’s only 78 and there’s another election in four years.