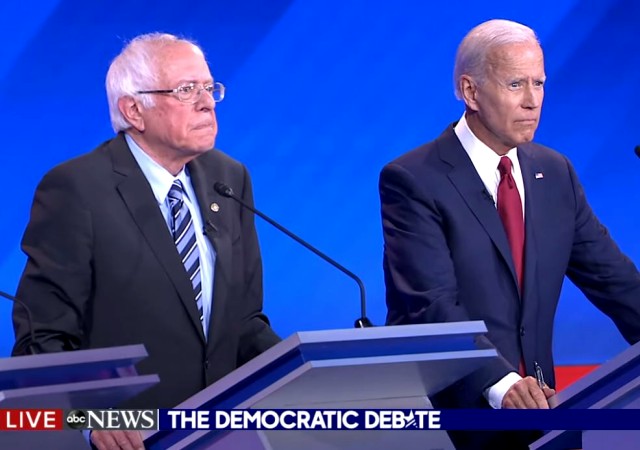 In the 2016 election, a significant number of Bernie Sanders supporters either stayed home, voted for Jill Stein, or even voted for Trump. They didn’t like Hillary Clinton, and they felt betrayed by the Democratic party.

Something similar is already taking shape in the 2020 election.

Bernie supporters see the establishment going to bat for Biden, after weeks of hearing liberal pundits ask how Bernie could be stopped. And just like they did with Hillary in 2016, many of them are vowing not to support Biden in 2020.

A ‘Never Biden’ movement vows not to vote for Joe

There’s no question it’s been a banner two weeks for Biden. But lurking in the background of his sudden ascension to all-but-presumptive nominee is evidence that at least some Bernie Sanders supporters might not migrate to him in November, weakening him in the general election.

The significance of the problem became apparent in the same string of primaries that put Biden on the cusp of the nomination.

In Michigan — a state critical to Democrats’ efforts to reclaim their general election footing in the Rust Belt — just 2 of 5 Sanders backers said they would vote Democratic in November, regardless of who became the nominee, according to exit polls. Four in five said they’d be dissatisfied with Biden as the Democratic standard-bearer…

“The rationale for us is that our votes need to be earned and that we’ve been taken for granted, and the party never moves to us,” said Alyson Metzger, a 54-year-old writer and progressive activist in New York City who supports Sanders. “If they install Joe Biden, I will not vote for Biden. … This is not democratic what’s happening in the Democratic primary.”

Democrats are undoubtedly hoping these folks will eventually come around, and some of them might. But many of them won’t.

The Bernie Bros are vowing revenge.

As the presidential campaign of Sen. Bernie Sanders continues to crash and burn, the socialist’s most hard-core supporters are vowing they will never vote for Joe Biden at the ballot box — even if that means handing Trump a second term.

“We will never – NEVER boost or support Joe Biden or defend his abysmal record and terrible policy positions,” Henry Williams, executive director of The Gravel Institute, told The Post. “We will tell people, as we always have, to vote their conscience and to make decisions based on the interests of all the world’s oppressed people … I do expect a massive exodus from the Democratic Party.”…

The grumbling from Sanders die-hards is no idle threat. A whopping 12% of them voted for Trump in 2016, according to an analysis by Cooperative Congressional Election Study. That added up to roughly 216,000 voters in Michigan, Pennsylvania and Wisconsin, exit polls showed. Trump’s combined margin of victory in those states was 77,744.

Bernie has already said that he will support Joe Biden if he becomes the nominee, just as he did for Hillary Clinton in 2016. But like 2016, it won’t matter to many of his supporters.

Does anyone actually believe the dnc is an honest broker? This will be the second time they screwed bernie, but what the bernie bros need to understand is bernie doesn’t care as long as he gets paid.

Why should the DNC turn their party over to a Democratic Socialist? It would forever stain the party with Marxism (as if the natural-born British East African hadn’t already done so). The DNC lets a non-Democrat run for their nominee just to keep him from running as a third party. Sure, they will alienate some Bernie Bros, but they will lose fewer votes than if Bernie was on the ballot in November as the DSA candidate. And, as you point out, Bernie gets paid.

Not only is there a Never Biden Movement, but there is also a Never Bernie movement. Bernie won California, but that hasn’t been acknowledged by the Mainstream Media, nor do they mention all of those Delegates that went to Bernie when they proclaim that “It’s all over for Bernie” Just as they delayed the Iowa caucus, until later the did it in California, even though they never had a problem in either state before. Also in Washington, until they fixed the results. One other thing: CA was always a Winner Take All State, for Democrat Delegates, until now. The Dems just can’t let help cheating every time they can.

I don’t see how anybody under the media-induced Wuhan influence could possibly want a cognitively-impaired geriatric or a crazy who wants to drive us to Venezuela as their President. It’s sad to see all the cancellations and craziness of the past week. But all of that is driven by private organizations and companies and state governments. I fully trust in Trump through all this. Anybody who would want Biden or Bernie in charge has a death wish.

I certainly don’t trust the DNC to have honest voting. The many means they use to “vote” has fraud written all over it.

There is no way that Buttigeig and Klobuschar and Liawatha all drop out as they did without pressure, and even with that, how would a large majority vote for a man who is clearly in early stages of dementia? Sure, some will ignore it, but not in this great a number.

The Biden campaign was dead, then it miraculously takes a turn for zero reason? Really? There isn’t one thing you can point to that resurrected his campaign, the poll numbers were horrendous for him, then suddenly they weren’t. If that doesn’t wreak of manipulation nothing does.

Bernie didn’t help himself, but Bernie crashing and burning his campaign over his love fest for Castro doesn’t translate into support for Biden, the only crazy man left standing, and causing the turn out in the numbers that were given. What motivation do you have to go vote when you have a choice between crazy and insane? You are far more likely to stay at home. This is nothing more than the left trial run at how they can manipulate the voter fraud for the election ahead.

Biden can barely get a dozen people to a campaign rally, yet gets hundreds of thousands of votes. Right.

biden with hrc as vp.
biden suddenly strokes out/gets mentally committed after inauguration,hrc finally gets her dream fulfilled. she persisted….
then michelle obama explodes (I wish literally…) back onto the screen.

Yippee, Trump will have clear sailing, continuing to lead these clowns around by their nose, one Tweet at a time.

<obligatory> “…but don’t get cocky.” </obligatory>

Biden, Trump, the Clintons, the Obamas, and most likely Bernie as well, are all working together for the same outcome. None of them are on our side. When that is not easily noticeable, broaden the information input.

Come November, the landscape with the Wuhan Flu “black swan” status is going to turn the election one way or the other. By then Bernie will be a faded memory and his voters sit it out. I have a hard time seeing Biden being allowed to be the Dem candidate because of his cognitive status. Either America will be well on track to normalcy in which case the Dems have no case, or we will be mired up in panic and economic decline in which the opportunity for Dems to win can’t be left in Biden’s trembling hands.

So, who replaces Bernie in the Bernie-Bro quest for free everything at no one’s expense? Mrs. Clinton? Mrs. Obama? Stacy Abrams?

AOC will be (technically) old enough to run for president by 2024.

Among Democrats Bernie was after all the people’s choice. Creepy Joe was the default the DNC went to strictly to stop Bernie. What else is there?

I hope they succeed. although these are people who support a candidate whose media team says 500 million us citizens declare bankruptcy from medical bills each year. math is racist or something.

It’s all right, they figured out that Bloomberg could just give away a few of his $$$ and make us all millionaires.

We shall see. Some of the Bernie Bro’s may sit out the election in the fall. Some of them may vote for Trump (probably not many). Some of them will vote for Biden being either good Democrats or vehemently anti-Trump.

… and some will vote for a third-party candidate TBD.

Make no mistake, Biden is Bloomberg’s puppet. The whole thing is was set up to keep Sanders and Warren out. The people would battle it out and the ones favorable to Bloomberg would drop out for the person who was leading to receive a bump just before SuperTuesday. Biden just happened to be it. Of course Biden happens to be the one who is closest to Bloomberg in philosophy.

A stooge for the credit card companies, and someone who was instrumental in shaping the bankruptcy laws.

For Sander’s supporters one would think Trump is the better choice. Yes he is wealthy, but he earned his wealth in the main, building things. Whereas Bloomberg earn his money by catering to Wall Street, and Biden hearned his money and status sucking up to the Bloomberg’s.

What a GREAT idea. I could really support these fools/tools and their Supreme Leader. Just don’t ask for money or a vote.

Bernie Bros are still stinging from what the DNC and Clinton did to him four years ago. They will see this as more of the same and it will be the end of them as reliable Dem supporters.
.
I remember back in the early debates, Biden was up there trying to convince the Bernie faithful that he too could be a radical Leftist if he had to. He was up there agreeing with all kinds of crazy Bernie schifft – raising his hand in support of things that would make AOC give him a kiss. He’s already walking it back now that it’s mono on mono and he’s in the lead. It will be more obvious once he locks up the nomination.
.
The best case for Biden is that Bernie’s die hard supporters stay home. The same goes for the Black voters. I expect them to stay home too as a best case scenario for Creepy Uncle Joe.
.
Unfortunately, a good percentage of both will go for Trump. By “good percentage” it may mean as little as 5% of each, but even that would be a 20 point swing in those vital demographics.
.
In an era where a hanging chad can make the difference, Biden and the DNC have a big problem on their hands.

“…terrible policy positions”
I guess the irony is lost on the Bernie supporters.

Either one provides a perfect excuse for the Dems to lose the election. They will be able to say that it’s not the party that the deplorables rejected, but the candidate.