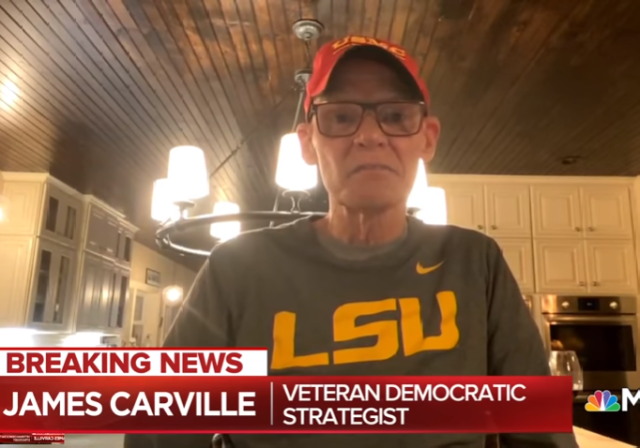 Democratic strategist and former Bill Clinton adviser James Carville appeared on MSNBC this week and stated plainly that Republicans “will kill people to stay in power.”

Carville was referring to the decision of the Wisconsin Supreme Court to not postpone the state’s primary, which happened on Tuesday.

Longtime Democratic strategist James Carville claimed Wednesday that Republicans were so intent on maintaining power that they would literally “kill people” in order to do so.

“My kind of mission in the short-term is to sound the alarm to say [that] Mitch McConnell and the Supreme Court — they’re going to do everything they can to hold onto power,” Carville said duing an appearance on MSNBC.

“This thing in Wisconsin was one of the most awful things I’ve ever seen in my life,” Carville added, referring to the controversy over whether to postpone the Badger State’s primary elections due to the coronavirus pandemic. “The extent that they will go to to hold onto power — it was all about one Supreme Court seat in Wisconsin — they will kill people to stay in power, literally.”

Earlier in the segment, Carville predicted that Trump would emphatically lose his bid for reelection in November.

“I am totally, totally unimpressed by President Trump’s political powers,” he said.

Carville is very confident in Biden’s chances. Like the Atlantic, which recently wrote that all Biden needs to do is stay alive, Carville thinks Biden can just “stand there” and win.

“The Democrats have already picked their nominee … Joe Biden,” Carville told radio show host John Catsimatidis the same morning. “There’s not going to be a convention of any kind.”

Biden’s opponent Bernie Sanders has not yet dropped out of the race, and the former vice president said he recently spoke with the Vermont senator to inform him that he was moving ahead in the process to select a running mate.

Carville said there’s a rare chance Biden will not be the nominee.

Carville’s line of thinking is flawed for at least two reasons. He assumes a majority of voters dislike Trump as much as he does, but recent polls do not reflect that. Perhaps even more importantly, he is just assuming that Bernie Sanders supporters are already on board.

YouTube personality Tim Pool understands Sanders supporters better than many people, and he is absolutely convinced that Democrats have a problem here. This video is 23 minutes long but worth your time:

Jimmy boy, I think by “Repbulicans” you mean “Democrats”. Because that’s been page one of the left’s playbook for at least the past 50-60 years, pal.

There the Democrats go again self projecting what they are and what they do onto innocent victims.

caseoftheblues in reply to notamemberofanyorganizedpolicital. | April 10, 2020 at 1:02 pm

James Carville is on my list of the top 10,000 people whom I would prefer that they self-isolate for the rest of their days.

The common factor among those on the list is membership in the Democrat Party.

With a ball gag in their mouth and their hands handcuffed in mittens.

Damn, I thought LBJ was a democrat.

And Democrats just Instigate and Investigate. I am wary of people who never have anything positive to say, except for Rube Goldberg perpetual motion give aways.

Given to whom he’s married, he should hope he’s wrong…

notamemberofanyorganizedpolicital in reply to stevewhitemd. | April 10, 2020 at 12:38 pm

Don’t you mean you sure hope he’s right considering who he’s married to?

Kill people to stay in power? Carville must have been wearing a sleep mask during the Arkancide years.

I’m sure Carville doesn’t know anybody who voted for Nixon, either.

Well, isn’t it like the democrats to accuse Republicans of the very behavior that they are engaged in and hope nobody notices. It would be hilarious if it weren’t just so fucking scary.

Reminds of that passage in The Lord of the Rings where Gandalf says Sauron cannot comprehend that his opponents would act in any way other than he himself would. Of course they’ll do whatever it takes to seize and keep the Ring of Power! The idea that they might want to destroy it is simply inconceivable.

Might check with the Liberal governors that said we can’t use hydroxychloroquine.

However, he should be afraid of the group of Americans who are fed up with all politicians, and their venal corruption.

As the old saying goes, if you want to know what the Democrats are looking to do, just listen to what they claim the Republicans are doing. They project all the time.

So, given what the left has been doing to this economy, given what they acted like when Trump wanted to ban travel from China, given how they are acting toward Hydrocholoquine as a treatment for this Chinese Coronavirus, I would say he is spot on… projecting to the Republicans what the Democrats are doing to stay in power.

If what Carville says were true … but it never has been, has it?

So why are we paying even the slightest attention to this guy again?

Pay no attention to anyone who looks like an extraterrestrial.

I think the exact same thing when I see Donna Brazile on the television. Why is *anybody* listening to what she has to say?

The funny thing is that twice he said “Wistonsin.” Yeah, that’s an intellectual I will listen to.

Headline you never saw: FDR goes to war to keep Democrats in power.

While I am always amused by Mr. Carville, it’s always transference with these people.

I seem to have misread the ending of Tolkien’s The Return of the King. I thought Gollum fell into the lavas of Mt Orodruin, and died.

Gotta wonder what Carville sees when he looks into a mirror.

Carville is not that stupid. He says what results in a deposit to his checking account. The words mean nothing.

“My kind of mission in the short-term is to sound the alarm to say [that] Lie about everything related to Mitch McConnell and the Supreme Court — they’re We are going to do everything we can to hold onto power including lying, cheating, stuffing ballot boxes, and anything we think of over the next several months,” Carville said during an appearance on MSNBC.

There. Fixed it for you.

What absolutely amazes me is that people like Carville hold that belief, and at the same time, somehow believe that Democrats won’t…

Let’s hop into the Wayback Machine to see what Corporal Cueball was predicting before the 2016 election.

Memo for Carville: Aside from the fact you were uniformly wrong on all counts, you were a friggin’ Nostradamus.

JC has zero credibility. He lost all cred as a political prognosticator when he was 100% certain that his girl was going to win. Now he’s 100% certain his little molester buddy is going to win as long as he has a pulse? I wish we didn’t have to see his ugly mug on the web anymore.

Funny, James Carville — I’d submit that the contemptible Dhimmi-crats want to kill people, with their indefensible and patently idiotic opposition to the common-sense China travel ban, on the grounds that it is allegedly “racist.”

That’s the Dhimmi-crats’ manifest uselessness, for you, in a nutshell — prizing narcissistic and self-congratulatory exercises in virtue-signaling, over protecting the homeland and American citizens.

he damn sure hasn’t seen very much, especially having been around the clintons/the kenyan

A local has taken on the task of removing my meme signs from a prominent corner so I hit them with the DEM + PANIC = PANDEMIC this morning. Now to sit at the picnic table and observe. 😉

notamemberofanyorganizedpolicital in reply to MajorWood. | April 10, 2020 at 1:52 pm

Instead of just passing the open displays of the local rag that citizens have called the toilet world for years and occasionally looking at the headlines, I’ve started turning them over not only to see what other lies they have below the fold what’s so it’s noticeable that it’s touched.

CorkyAgain in reply to notamemberofanyorganizedpolicital. | April 10, 2020 at 3:49 pm

Eww, it’s got your cooties on it!

notamemberofanyorganizedpolicital in reply to CorkyAgain. | April 10, 2020 at 5:04 pm

No worries since only TDS DEMS buy them.

As I have read it around the web, Wisconsin was a real special case.
It seems the Democratic Governor couldn’t make up his mind what to do with the election. Then, the early numbers absentee ballot came in from Democratic strongholds running lower than expected. Then the day before the election, the Governor decided to stop the balloting and move to another date (probably figuring any court appeal might rest the result on the absentee ballots which usually are heavy Democratic).

This is slander per se, and somebody should sue the bastard. Filing suit and getting a ruling is by definition avoid murder.

I guess he’s never heard of the Clintons…

Drag a $10,000 bill in front of James Carville’s trailer-park mind, and you never know what lies you’ll find.

“…they will kill people to stay in power, literally.”

Now compare them to the Clintons.

I beg to disagree. He really means “figuratively.” Leftists are the ones who LITERALLY kill people.

You might better have dedicated this space to a discussion of what happened in Wisconsin rather than wasting it on a leftist hysteric who doesn’t even believe 90% of his own rhetoric. Tales of boxes of absentee ballots never mailed to voters and other discrepancies cry out for investigation.

Yup. I mean, he worked for the Clintons.

What do you get when you drag a roll of toilet paper through a trailer park? James Carville!!!!!!!

Ole Serpenthead has never met some demogogery he didn’t like. He seems to have moved on from dragging $20s through trailer parks.

His hat and tee shows you he is a simpleton living off his very distant past.

Not sure what he’s complaining about…killing thousands sure sounds like a Dem voter registration drive to me!

He means that Republicans will risk their lives for free, fair and honest elections while Democrats will use any danger to cheat and take you freedom. Freedom is often dangerous.

Go away you morally-bankrupt kook!!