“Democrats need little from the front-runner beyond his corporeal presence.” 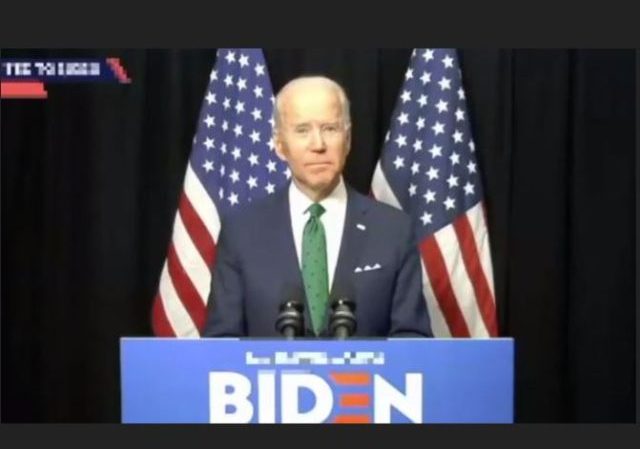 People on the left don’t seem to have very high expectations for Joe Biden. The liberal journal, The Atlantic, has published a new column suggesting all Biden needs to do is stay alive until November.

It reads like something out of The Onion or the Babylon Bee.

This is a real article in The Atlantic. pic.twitter.com/0vJ3mM39jN

From the piece by Alex Wagner:

Two days before the South Carolina primary that would reverse his political fortunes and redirect the course of the Democratic nomination, Joe Biden’s campaign for president announced a hastily planned event in McClellanville, South Carolina. The national campaign press was alerted that Biden would enter full battle mode at this stop, that the proverbial gloves were about to come off ahead of the kill-or-be-killed primary on Saturday, and no one would want to miss this one.

And yet, when the cameras and reporters arrived, all they found were a few folding chairs in an otherwise empty parking lot, in front of a community health center. Biden walked out to a podium, mumbled a few words about the improvements he wanted to make to Obamacare, and then shuffled off, alone. The sun was shining, the birds were chirping, and absolutely nothing had changed. The most notable thing about the event was how unremarkable it was.

Wagner spends paragraphs explaining how unimpressive Biden’s campaign is, but clearly thinks hatred of Trump will carry Joe over the finish line:

In all likelihood, the desire to oust Trump will be piercing in the coming days, as death and chaos escalate. The president has been reckless, duplicitous, and morally hazardous in his leadership during a pandemic that is likely to be the defining event of a generation—forget about a campaign cycle. But the many union members looking at their closed casinos and the mothers in lockdown with their children and the students forced off their campuses and the older Americans living in complete isolation may find it impossible to imagine that their earlier fears about another four years of Trump have abated, or that the ferocity of their desire to get him out of office has lessened. Indeed, the emotion of this moment may displace any that has come before it.

Biden’s team appears to understand this, and to believe that what matters most now is keeping their candidate alive in the American imagination as an alternative to Trump.

What an enthusiastic view of Biden’s candidacy. Also, consider this:

Democrats and their media allies have repeatedly challenged Trump’s mental health, but now their bar for Joe Biden – who frequently seems confused – is just stay alive through November. What a message.

If you have time, I recommend watching Tim Pool’s analysis of this article. It’s entertaining and Pool can barely contain his laughter as he discusses it:

Finally, this should really be Biden’s campaign theme now:

He will also need to keep from drooling and peeing his pants noticeably during the debates or they will need to keep him off TV until after the election.
That would cause a panic like the run on toilet paper, ammo and guns for the Democrats.

I take comfort in the knowledge that Joe Biden is out there working tireless, nights and weekends, just trying to develop a vaccine for Polio.

Limbo territory. “How low can you go?”

They are plotting The Toricelli Switch to Cuomo as we type. Sex allegations first, then mental questions, etc. He will go down with the same heavy hand that took out Bernie is mu guess.

If the purpose is to stay alive, he better not choose Hillary Clinton as VP.

Well, with the virus at large and Slowhandsy sheltering in place in his bunker, at least we won’t see much of him groping the little girls.

Like with FDR in 1944, the VP pick is what really matters. That, and all of the appointments Biden would rubber stamp.

To make appointments he’d have to make it to inauguration. I assume that if he wins he’ll be replaced before Dec 14 — and not necessarily by his chosen running mate.

Yeah, what are the rules on that?

My presumption would be that the VP-elect would be inaugurated as President, but I could be wrong. The only precedent I could think of was Pres. Tyler, but he and Pres. Harrison had taken office a month *before* Harrison’s death.

Oh, I get it now. You’re suggesting that the Democrats will submit a replacement slate before the electoral college votes on 14 December.

But that makes me wonder, if Biden wins with a majority of the popular vote how will the Dems square their request for a new slate with their compact to abide by the result of the nationwide popular vote? Wouldn’t be rather presumptuous of them to suppose that their replacement would also have won that vote?

Silly me, of course such concerns will simply be brushed aside with no attempt at all to square the circle. The compact will be stuffed down the memory hole to join with all the other inconvenient facts of leftist history.

I’m suggesting that Biden (assuming he wins the election) will resign from the ticket some time before Dec 14, on medical grounds. Either he’ll suffer a well-publicized medical setback, or he’ll just announce that he can’t do this any more. So no betrayal of the voters, but their candidate is no longer available, and they didn’t vote for the running mate to be president, so the DNC can justify putting in whomever they like. Assuming anyone asks them to justify it, of course, which you correctly say is unlikely to happen.

Legally, as far as I know, the Democrat electors will be pledged to vote for whomever the DNC tells them to vote for, and almost all of them will be party loyalists who will fulfill their pledge because they believe in it.

Of course this all assumes he’s doing well in the polls leading up to the election. If late October comes and Trump is winning, I expect Biden to have his medical episode then, and the DNC to parachute someone in to replace him and get all the sympathy vote. Again, not necessarily the running mate.

Andrew Cuomo had a couple of good days last week but he has evolved into s sanctimonious whiny child. NYC is the center of the U.S. pandemic but it is not the center of the universe. The Feds (FEMA, rest of the federal govt.) are doing more for NY state and the city than any other administration could or would have done. Cuomo has also entered “Chicken Little” territory as the rate of multiplication of hospitalized patients is dropping- due to the drug combination being used and the efforts to distance people. His pleas for 20-30,000 ventilators is off bad numbers. Credibility is an issue and he’s losing it fast – but he sure likes to hear himself talk. Sort of “live by the sword, die by the sword”.

he has evolved into s sanctimonious whiny child.

Not “evolved”, his nature has simply become visible to those who weren’t paying attention before.

If I were running the Trump campaign, I would make the issue the Veep nominee, whoever she maybe.

If Biden were to die tomorrow, Democrats might have the opportunity to run a stronger candidate.

But if he were to have a serious medical incident between now and the nomination they’d probably still be stuck with him, even if it became obvious that he had lost the ability to manage his daily needs, let alone serve as U.S. president.

The reason articles like this get written is, their author’s project their Trump-hatred onto the entire electorate, somehow imagining that everyone has the same opinion of Pres. Trump as they do.

if he were to have a serious medical incident
ArKarona virus?

“But if he were to have a serious medical incident between now and the nomination they’d probably still be stuck with him, even if it became obvious that he had lost the ability to manage his daily needs, let alone serve as U.S. president.”

The run up to the El Cid presidency maybe?

He has that blank alzheimer stare. This won’t end up well for him.

He has that blank alzheimer Democrat stare.

Watching his interviews is becoming a positively creepy experience — like he’s become one of the undead.

Today in my YT recommends was a video by KLRystal ball and dufus.

They were agreeing with Sanders when he complained that Biden would not be doing any more debates. I would like to see more debates but when was the last time someone who has suspended their campaign been in a debate?

Bee Gee’s hit “Stayin’ Alive” has got to be used for Biden’s diminishing run.

That’s the face of man who needs nursing home care, not the Presidency.

Exactly. Keeping him in the race is beyond cruel — it’s downright ghoulish.

That’s the face of someone that needs nursing funeral home care, not the presidency.

And that’s the truth.

Once again, the left illustrates they’re not the smart set they claim to be.

The right had about 20 candidates, and most had a good chunk of die hard supporters and fevered arguments about which was best.

We didn’t have “Weekend at Bernie’s;” we didn’t have to prop up our candidate just so he could LOOK LIKE he was speaking into a microphone.

Dear Leftists: Have you looked in a mirror lately?

And our candidates’ age range was healthy.

The left, most of theirs are or are about to be octogenarians.

It’s almost as if the Democratic Party were a union, where seniority matters.

Damn….. He has the deadlights stare…

Maybe Cuomo will run as VP.

Biden eliminated half the population as a VP candidate at the last debate, maybe Cuomo would have to wear a dress to be considered.

Alex, “I’m so bad NBC/MSNBC wouldn’t keep me on the air” Wagner

Biden has always been a douchebag in my mind but did you hear him today?

“I’m going to… Barack… significantly increase the number of pell grants that are out there. A pell grant is a family basically less than $50,000 you’re able to get at the time, it was less than six but it raised it to $6000.”

At this point having Biden run is tantamount to elder abuse.

This is the way they should have advised Biden:

all you need to know right there.
looks like I am getting my wish to see him devolving into diapers right in front of all our eyes.
good.

Actually, it is recognition of a principal principle that republicans would do well to remember. The candidate is less important than winning the election. Your agenda exhibits retrograde motion when you are out of power.

IF Biden wins the election keep close watch on who is picked for VP. Biden WILL be deemed incompetent and the VP will become president.

No, I don’t think so. As I wrote above, I think they will bring in someone new. Maybe Fredo’s smarter but nastier older brother, or maybe Michelle 0bama.

All Joe has to do is “stay alive?“ That ship has sailed…

Liberals have only one criteria for their nominee, a pulse. Sad.

Poor Alex Wagner is caught in a projection loop. Her hatred of Donald Trump is so abiding and deep that she cannot imagine how anyone could possibly feel different about him.