Perhaps part of the reason the streets of San Francisco are covered with feces, needles, and desperation? 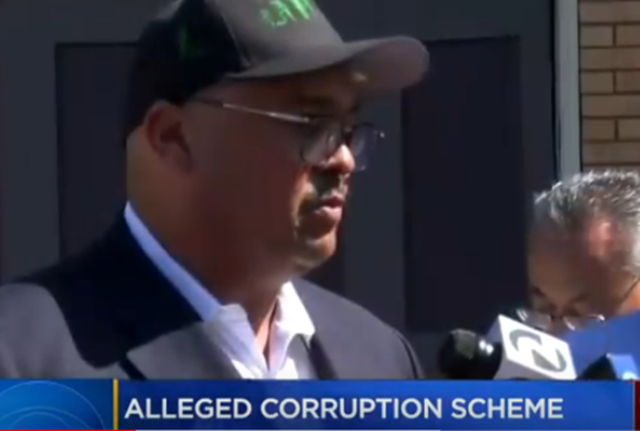 We have been following the diseased streets of San Francisco for a while, including the development of a human poop report app and the fact that the city’s residents have to fend off the homeless from in front of their stores and homes.

Part of the problem may just have been the priorities of its city officials. For example, the Public Works Director, whose staff is tasked with keeping the streets clean, has been arrested on alleged public corruption charges.

A top San Francisco public official and go-to bureaucrat to mayors over two decades was charged with public corruption Tuesday, upending City Hall as elected leaders scrambled to reassure the public that bribery and kickbacks would not be tolerated.

It also alleges other schemes in which Nuru is accused of trying to help his friend score contracts to build homeless shelters and portable toilets, along with a restaurant at the city’s new $2 billion transit station.

Perhaps certain California congressional representatives should check out the case the FBI is bringing against Nuru. This seems a lot like actual bribery!

The schemes involved an envelope of cash, fraudulent city contracts, improper gifts from a Chinese developer and a $2,000 bottle of wine, according to authorities.

FBI agents on Monday arrested Nuru, 57, and Bovis, 56, at their Bay Area homes before unsealing a federal complaint Tuesday for one charge of wire fraud. Nuru is separately charged with lying to the FBI after initially being arrested on Jan. 21 and being told to keep quiet about the investigation.

“The complaint alleges corruption pouring into San Francisco from around the world,” said David Anderson, U.S. attorney for the Northern District of California, at a news conference Tuesday.

Anderson accused Nuru of “corruption, bribery kickbacks and side deals by one of San Francisco’s highest-ranking public employees.”

Meanwhile, citizen activist and public sanitation superhero Scott Presler (aka “The Persistence”) is out in San Francisco today doing the job that apparently Nuru didn’t want to do:

Met a gentleman who works for Public Works.

They have cleaning crews out now.

Hopefully, he is not too late.

I didn’t want to believe it.

Right next to a food truck, there’s human feces everywhere.

This is a health hazard to the San Francisco community.#SanFranciscoCleanup pic.twitter.com/UhorMYlm5i

Believe it or not, Presler’s group of volunteers is getting hassled by protesters.

We got protested for picking up trash.

I never thought I’d see the day, as an adult, that I was protested for picking up trash.

Here is some video of Presler gamely dealing with the Antifa crowd.

“Why is Antifa protesting a trash cleanup?”

While volunteers cleaned the city, protestors called them racists & fascists

One Presler fan had the perfect summation for the entire situation:

So, how will it look when the entire homeless population contracts the Coronavirus?
It will then explode, everywhere.
San Francisco has to clean house…
But I think it is already too late.

It is interesting that these groups of people whose average IQ hovers around 85, consistently blow their opportunities with crooked scams. They are not smart enough to pull it off, but they still try.

This reminds me of Chicago in the late ’80s.

I bough a two-bedroom apartment in a 6-flat where I could afford it, like many other beginning professionals. We got protested for the big sin of gentrifying the area. Apparently the local organizers could find drug sellers and prostitutes (!) willing to object to rising real estate values.

The simple truth is, if I could have afforded a nicer neighborhood, I would have moved to it.

I lived in Sacramento in the early 60’s. One of the great high school dates was to go to San Francisco on Saturday, visit the sites and then go to dinner. We were so sophisticated in such a sophisticated city. In those days, even the garbage men wore bow ties. It was quite a city.

I feel sorry for those that never got the chance to see SF in its glory days.

I resided there in the early 1970s. It was quirky and odd in places, and crowded. But, it had charm, and unlike other cities, had an amazing variety of radio stations. I mean, what city, even then, supported TWO privately operated classical music stations?

Corrupt? Somebody who got an important job under Willie Brown?

It is important to remember that Mr. Nuru’s work as a consultant was a side job and did not take anything away from his main work as the Public Works Director. Under Mr. Nuru’s lead, the amount of feces picked up has actually increased by 1.3% per year for the last 5 years. It is not estimated that well over 7% of the feces on the street gets picked up. (SOURCE: SF Gate)

Bunch of racist pigs. It’s all because people who never had slaves discriminate against a bunch of people who were never slaves and never mind. There is nothing slavery can’t do.

This is Jay Inslee’s plan for using Washington’s emergency fund down to the letter.

Follow the money. Part of it must go straight up to pelosi and friends.

SF politician found to be corrupt. In other news, the sun rose in the East again this morning.

Remember folks this is a good example of why we have to start draining our local swamps this year.