The poop in San Francisco keeps piling up

The poop in San Francisco keeps piling up 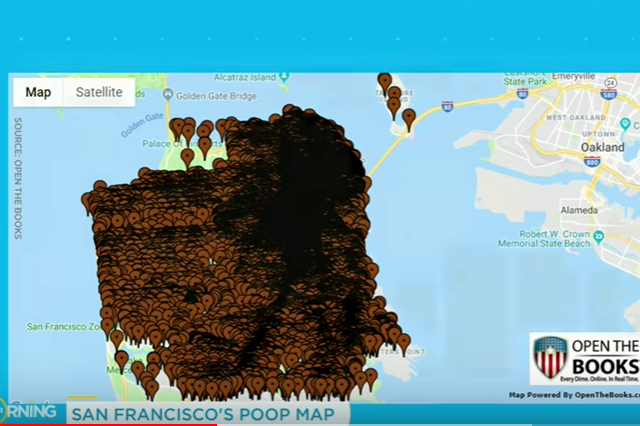 The Environmental Protection Agency (EPA) escalated its ongoing dispute with San Francisco, once again accusing the city’s water agency of improperly discharging wastewater into the ocean.

In a letter to the San Francisco Public Utilities Commission, EPA officials reiterated their assessment that the city was out of step with its wastewater discharge permit, which regulates water quality standards. The letter also implied that state water regulators may have erred in issuing permits to the SFPUC. The federal government gives the state the authority to issue wastewater discharge permits under the Clean Water Act.

Federal officials wrote that they doubted the SFPUC could “demonstrate compliance” in the near-term with the terms of its permits, and so they “strongly urge you to enter into … an enforceable agreement with the EPA.”

The EPA also accused the city of improperly maintaining its sewer system and failing to keep adequate records when people might have been exposed to pollution.

This has become critical issue as the poop in San Francisco keeps piling up.

As distasteful as it may be to discuss, complaints to SF 311 about feces on city streets increased again in 2018, including a surprising surge in Glen Park.

The rental site Rent Hop examined the number-two numbers across SF for 2018 and 2019 to date. According to their analysis, in 2018, SF 311 received 28,315 animal/human waste complaints, compared to more than 20,800 the year before, an increase of about 35 percent year over year.

One San Francisco native explains,”My wife and I both work in the civic center area and that’s obviously the worse but I can definitely notice it starting to creep out from the city center.”

It’s so bad, the city has it’s own “poop patrol” who cleans up human waste, mostly in the city’s Tenderloin neighborhood.

So far this year the neighborhood’s received the most feces complaints, nearly 7,000 per square mile.

The problem is not likely to get better anytime soon. San Francisco’s newly-elected district attorney has promised not to prosecute public urination and other quality-of-life crimes.

In response to an American Civil Liberties Union questionnaire reported by The San Francisco Chronicle last month, Chesa Boudin said such crimes should not be prosecuted.

“We will not prosecute cases involving quality-of-life crimes,” he said. “Crimes such as public camping, offering or soliciting sex, public urination, blocking a sidewalk, etc., should not and will not be prosecuted. Many of these crimes are still being prosecuted; we have a long way to go to decriminalize poverty and homelessness.”

I wonder what Greta Thunberg must think about the gigantic mural of her face that graces such an environmentally pure part of the globe!

Liberals destroy everything they touch.

No, just the stool of the Pacific Northwest.

notamemberofanyorganizedpolicital in reply to Cleetus. | November 25, 2019 at 10:29 am

I prefer to re-name all those “stools” after Pelosi!

As in:
“Oh, how disgusting!
That dog is doing a Pelosi again on the lawn!!!!”

Librals are in deep sh!t.

I wish. It seems that the GOP doesn’t stand a snowball’s chance in Hell of challenging the Donks’ hold on CA.

I just received this notice:

“FDA, CDC, and state health authorities are investigating an outbreak of illnesses caused by E. coli O157:H7 in the United States. FDA & CDC outbreak investigation evidence indicates that romaine lettuce from the Salinas, California growing region is a likely source of this outbreak. Upon this advisory, a withdrawal was initiated and various products containing romaine lettuce grown in Salinas”

It seems that California is shipping the best part of their poop all over the country.

I always knew San Francisco was full of $**+

That map shows about 5% of San Francisco that hasn’t been pooped on yet. Get to work poopers! Make it 100% to really send a message!

The EPA is just the sort of government agency San Franciscans clamored for, for so very long. Now, the EPA is here, but are ignored by the very people demanding them.

My guess is: they found out what compliance cost.

Since SF-ites are so much in favor of big government and the regulatory/nanny state, it stands to reason for them to borrow from the Royals and to create a new office, the Groom of the Stool.

They could put in Public Restrooms..

They would end up like StarBucks restrooms or worse.

They did, at great expense. They were automated for self-cleaning, built like Mosler safes for vandal-proofing, etc. They ended up being used as shooting-up rooms, sleeping quarters, etc. They are gone.

North Koreans think this is WASTEFUL … all that fertilizer going to waste.

So, put it in boats and ship it to their kindred spirits in Pyongyang!

If you build it, they will come. By not enforcing the law, having needle exchanges, welfare, etc., cities like San Francisco and Seattle have done everything possible to attract the homeless.

Now don’t be leaving Portland out of the mix. We may be smaller, but we are tying really hard. We even upped the bottle deposit to 10 cents to inject more money into the recreational meth and heroin markets.

There is this story, probably 20 years old, of a resident of NE DC who got fed up with pet owners allowing their animals to defecate of the sideways.
To bring attention to the problem, he went around putting little flags on toothpicks that read “poop”.

The plot above brought it back vividly.

At first I thought “blocking a sidewalk” was a weird addition to the “no-prosecution” list, until I realized why it’s there. Antifa surrounding somebody and not letting them leave is, I am pretty certain, kidnapping under California law, and thus a serious felony. I believe this DA will call that, when done by politically preferred persons, merely “blocking a sidewalk”, whether or not an actual sidewalk was involved.

Liberal paradise. You can’t have a plastic bag or plastic straw for fear you might not properly dispose of it, but you can leave a steamer anywhere the spirit moves you.

I always wondered why the SF Bay sea otters are brown While the ones in Monterey are grey.

Most bums try to be clean(er) – they used the disposable plastic bags for poop and dropped them into garbage cans. The Bag-Nazis took the bags away.…

randian, that’s possible but I suspect it has more to do with bums and panhandlers impeding pedestrians as they solicit for cash.

That’s very compassionate of him to plan on not prosecuting quality-of-life crimes. At what point will the city worry about the quality of life of the law abiding residents?

Never. All they have is contempt for them.

But no contempt for their money.

I grew up in Flint, Michigan, when it was clean and prosperous. with good schools. By the time I reached high school things were going downhill fast.

We decided to leave the city, and when I was 16 my grandfather, father and I built a house that summer on about 30 acres.

That move cost our family a decade worth of equity, equity which went to the city’s underprivileged. One neighborhood after another has been overrun over the past 60 years, to the point that for the most part, Flint is a ghetto.

In the same manner that those who suffer from Trump Derangement Syndrome, Flint residents scheme, perpetuate one scam after another, fleecing taxpayers, county, state and even nationally.

The point I am making is that sh!tholes usually cannot be fixed. Leaving seems to be the only solution. Maybe, given time, this will fix southern California’s collective wagons 🙂

“We will not prosecute cases involving quality-of-life crimes,” he said.

This is weirder than it looks. Normally not even the most red-hot socialists are devoted to filth and poor hygiene. What the hell is with this guy?

With great sadness, we have to report Los Angeles is there too.

Under crooked, idiot mayor Eric garcetti, the city has surrendered itself to violent street crazies. They’re in every inch of the city, and will remain as a permanent threat to everyone.

Meanwhile, lettuce from California is being recalled because of e. coli contamination. No one saw that coming. ?

notamemberofanyorganizedpolicital in reply to WestRock. | November 25, 2019 at 10:45 am

“I Left My Poop in San Francisco”?

notamemberofanyorganizedpolicital in reply to DouglasJBender. | November 25, 2019 at 10:48 am

Seriously, some up and coming singer needs to record and release that!

Kepha H in reply to notamemberofanyorganizedpolicital. | November 25, 2019 at 7:16 pm

Enjoy the shitshow SF, we just cancelled a long weekend planned there. I’d rather make it a fecal-free weekend away somewhere else.

Some people are self destructive, especially addicts. It seems there is little which can be done to fix them. They eventually kill themselves, the only question being how much damage they do to others before that happens. Isn’t it time that we allow addicts a safe space (for the benefit of society), where they, through their own actions, meet their fate sooner rather than later.

The police in San Francisco will not arrest a public pooper but they will arrest you for eating a sandwich in a BART station! Only in a liberal sihthole is that possible!

Maybe they’ll let the sandwich eater go if they promise to poop on the train.

You have to hate people an awful lot to believe that this ideology helps anyone. The city’s officials should be forced to clean up (literally!) the (literal!) mess they have made.

Once upon a time, San Francisco, troubled by lawlessness and corrupt officials, figured out a way to solve the problem. It would be terrible if vigilantism were the only way to solve the effects of leftism run amok. (Oh, I forgot: in the 1850s people had guns.)

Addition: George Soros, insane billionaire and refugee from the Soviet repression in 1956, should be forced to endure the consequences of the wild leftism he is now attempting to impose upon the United States. I’d like to see him forced to clean up sidewalks that are the way they are because of the sort of officials he is attempting to see elected.

I wonder what Greta Thunberg must think about the gigantic mural of her face that graces such an environmentally pure part of the globe!
———————–
I don’t think anyone would notice the difference between her face the poop on the sidewalk.