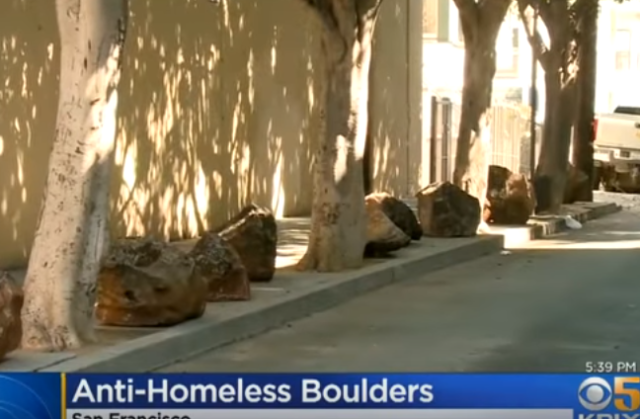 California has returned to its “Wild West” roots, as individuals strive to civilize the coast using their wits and initiative.

Case-in-point: Residents of a San Francisco side street have trucked in boulders to discourage homeless camping near their homes.

About two dozen of the massive rocks, each weighing hundreds of pounds, create barriers on a half-block stretch of Clinton Park, a side street off Market and Dolores streets. The boulders don’t block the sidewalk, but do limit the space available for tents.

Neighbor David Smith-Tan told KTVU that his family received a letter from the neighborhood about a month ago addressing the sidewalk problem.

“A bunch of my neighbors, we all chipped in a few hundred dollars and I guess this is what they came up with,” he said.

The line of 24 giant rocks is also intended to block open drug dealing that had been an ongoing problem. City supervisors, shockingly, were initially clueless about their origin or intent.

And they may well become a permanent fixture.

The rocks stand 2 to 3 feet high and 3 to 4 feet wide, so transporting and unloading them would have been quite a job.

Of course, social justice activists are unhappy with this development.

“”We have 1,200 people on the wait list for shelter. That’s for tonight. People have nowhere to go,” Friedenbach said., according to the station.

Meanwhile, Los Angeles residents are using some are using prickly plants, fences, and barriers to prevent homeless camps from spreading.

With dirt, they can weigh hundreds of pounds. The makeshift planter boxes are Peter Mozgo’s creations — roughly 140 of them lined up on the sidewalk to prevent homeless people from pitching tents outside his business.

Mozgo acquires the boxes from a Bell Gardens company that imports ginger, paints them firetruck red, pays $120 per cubic yard for dirt and then uses a $900 trailer to haul it all back to his neighborhood on the south end of downtown Los Angeles.

Like many L.A. residents and business owners, the 49-year-old says he is frustrated by the growing homelessness crisis — and the city’s often uneven response to it.

Los Angelinos are planning to install more planters throughout the city. Hopefully, Scott Presler’s clean-up site at Oxnard and Van Nuys will get the beautification treatment.

I suspect that more Californians will be removing politicians from the problem-solving loop, when it comes to controlling the homeless camps and preventing outbreaks of disease associated with those areas.

This plan has an obvious weak point.

The boulders don’t block the sidewalk

The homeless camps will grow where the flat surfaces are.

Bird seed. Get the winged and 4 legged critters vying for the same territory. Cost for a city block is about a buck a day and they usually move on to a more suitable spot after a few days.

but then you still have a sidewalk covered in droppings. Might be a different color and consistancy, but still full of diseases.

Those are Hate Rocks

Why not vote out the rockheads at City Hall who created the homeless mess in the first place?

Amazing how that never seems to be either a recommendation, nor even a solution the few times that it’s happened.

Is it the Council or judges who allowed the homeless to camp out?

How long until there is an ordinance making them illegal? San Francisco hates its self-supporting residents and businesses.

Next step will have the homeless sue them.

my thoughts excactly, can’t do it with laws, sue

The Compassion Lobby will soon be demanding that the city divert its resources from cleaning up poop and discarded needles to remove these Evil Bounders. The city will comply, once again surrendering to the lunatics.

The building department will assess a $100 “inspection and fire safety fee” for each rock.

I listened to a radio interview Scott Pressler, the Virginia activist who led an army of volunteers in cleaning an LA homeless camp a few days ago and famous for doing the same in Baltimore. He was asked whether he had any issues with the police and replied that the police didn’t know he and his volunteers were going to do this but were heartened to see it. One cop also told him it was a good thing he hadn’t preannounced the event because he would have been ordered to block the clean-up and arrest people who resisted.

I’m hoping that Dr. Drew picked this up and worked it into his campaign. The politicians are THE BLAME for this. The taxpayers approved $1B for addressing the homeless crisis yet other than the $700,000 per bed handout to the real estate developer cronies, not a single politician will explain exactly where than money went.

Good luck voting any one of them out. Believe me, most of these crooked politicians (but I repeat myself) would be voted it out if someone ran against them. The Republicans are WORSE than the Democrats!

A key point in your comment is the ~$1B for the “homeless crisis”. As my ex-mayor, Rahm Emanuel once said, you never let a crisis go to waste. Where did the one billion go? Check out the contracts and it’s likely that a lot of it went to consulting, overhead, and a bunch of useless things. Precious little went to solving the crisis.

One could use a fraction of this to fund Salvation Army facilities (what used to be called, “flop houses”) to get the homeless indoors at night. Even that wouldn’t solve the problem since there is a hard-core homeless group who “live hard” — that is, deliberately stay on the streets all night. Whatever their issues are with drug abuse and mental illness, they don’t want our help, thankyouverymuch.

You’re correct: not a single politician will explain where they money went. That’s the last thing they want to do.

well that settles it. i’m never moving to california. i always thought that it was a place of compassion and big hearts. somewhere that welcomed anyone, without regard to skin color and bank accounts. but now i see this. boy, were my eyes opened and now i see clearly. they are nothing but small minded, bigots and racists! how dare they not share their good fortune with others. they might say that the smell was offence or that the drug use threatened their children. but, don’t be fooled, these are nothing but code words. their main objection is that most of the homeless don’t look like them. i never realised so many conservatives lived in the former golden state.

Want to radically reduce homelessness, cheap? The following will never be done because it makes too much sense:

3. Entry constitutes consent to be searched. Weapons, drugs, and alcohol confiscated and discarded.

4. If you expect to eat, you will be on the cleanup crew.

5. People caught camping on streets, under freeways, in parks, etc., will have their belongings seized and thrown into a landfill.

I’m glad the problem isn’t the failed policaioan the elect over and over, its lack of boulders. sarc

Where is common sense boulder control when it’s needed? Are those assault boulders? Do the home owners have permits for those things?

Boulders are clever! Hmmm, I went with native plants – wild thistle populates the open space behind my Bay Area home. I have watched members of the local homeless encampment give wide berth behind my property. Apparently “pokie things” are not inviting. I’m OK with that.

“Pokie things” as part of a drug-delivery device are just fine, though.

I’d like to take up donations to send Detroit’s homeless to SF. For the laughs mostly.