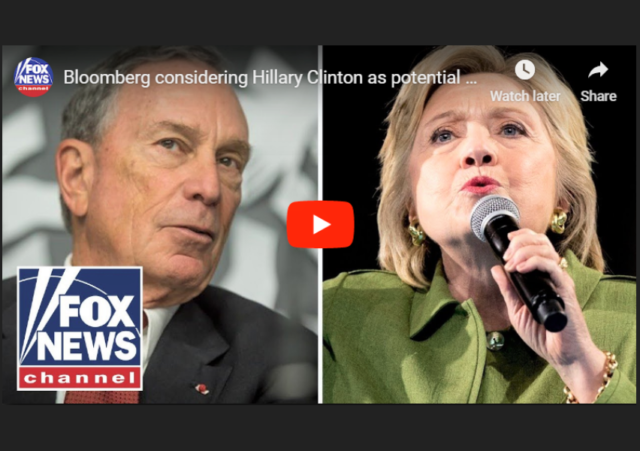 If you’ve already switched from Drudge to the Bongino Report, you may have missed this morning’s Drudge Report headline:  “EXCLUSIVE: BLOOMBERG CONSIDERS HILLARY RUNNING MATE.”

It’s unsubstantiated beyond Drudge claiming it, but the reactions to this bizarre announcement (by Drudge, not—yet?—by Bloomberg or his campaign) are hilarious.

“Sources close to Bloomberg campaign tell DRUDGE REPORT that candidate is considering Hillary as running mate, after their polling found the Bloomberg-Clinton combination would be a formidable force…,” the tweet continued, pointing to Drudge’s eponymous website, where the scoop was played in underlined type above the scroll and a bright-red all-caps headline.

Here’s Drudge’s tweet (note, he usually deletes his tweets within hours, so the tweet is followed by the screengrab of it): 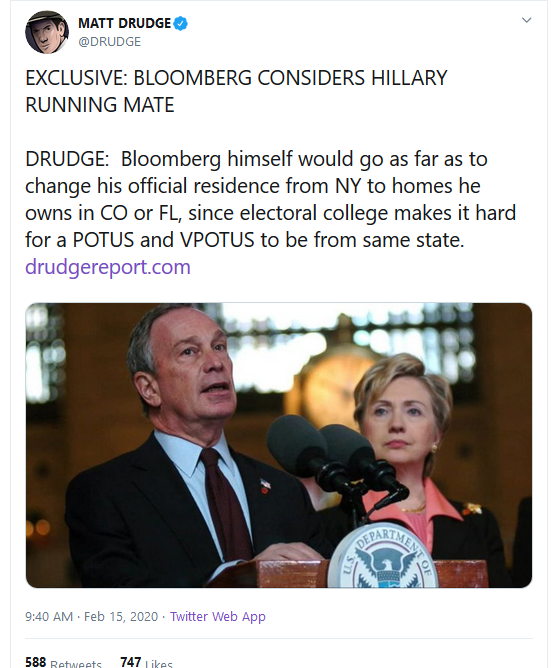 The jokes almost write themselves.

The white super rich ticket because the little guy!

Mini Mike and Grandma Death…. What a ticket…

“Operation Screw Bernie 2.0” may have its first Medal of Honor recipient: Mike Bloomberg for courageously sacrificing his own life by jumping on a grenade. #TopMinion

Mini-Mike considering asking Hillary to be his running mate. Does he have a terminal illness or is this simply a deathwish?

Soon to be trending hashtag: #bloombergdidntkillhimself

The swamp may like her (after all, she took everyone’s bribes, and they have yet to be paid off), but the voters hate her.

Bloomingidiot won’t pick her. Even he is not that out of touch.

Bloomberg would probably commit suicide, one way or another, if he had to put up with Killerary.

Mike: How’d you like to be my running mate?

Hillary: A heartbeat away? I can live with that…

notamemberofanyorganizedpolicital in reply to RedEchos. | February 17, 2020 at 6:30 pm

Bannon: Bloomberg has a personal vendetta against Trump

Is it true that Bloomberg commented that he can change his “place of residence” for the campaign from New York to Florida or Colorado in response to criticism that you shouldn’t have the VP (Hilary) from the same state as the Pres. nominee?

If CNN reports that then my belief is……

I like Bongino, but if this is first reported by Drudge how is it “exclusive” to his report?

Hmm, I puzzled over this question, and I think that I was unclear about whose “exclusive” it was. I have edited the post to more clearly indicate the headline is Drudge’s (not Bongino’s).

Even if it was Drudge’s scoop, who cares?

I don’t. I haven’t read Drudge in years, but I saw that he was trending on Twitter and wanted to know why. 😛

I get your point – I was just making another point about blowing off Drudge.

In fact, blow off any site that is celebrity-driven garbage, like Foxnews.com.

remember that just a couple days ago the same “sources” were saying that Mitt Romney was going to be Bloomie’s running mate.

IF true, then I’ll believe the reports about Mini Mike being so stupid and how he “made” his riches………….

Also if true, then Mini Mike has a real death wish.

Fuzzy Slippers in reply to notamemberofanyorganizedpolicital. | February 15, 2020 at 8:11 pm

Heh, the left is trying to say Drudge is trolling on behalf of Trump. This strikes me as amusing on a couple of levels: one, Drudge lost much of his audience because after Trump’s election he drifted into #NeverTrump world with his story selection (thus WhatFinger, Bongino Report, and others, sprang up to fill the void), and two, the left actually realizes that Hillary would be a horrific drag on a ticket they already hate. That one makes me giggle.

Honestly, if a Democrat wants to “unify” the ridiculous mess that is the Democrat Party right now, s/he’d have to take on Bernie as the VP (assuming he doesn’t somehow manage to finagle the nom from one of the other commie candidates pretending to be “moderate” by contrast to Breadline Bernie). If they really need the Bernie horde of revolutionary loons, that’s the way to get them. But that, too, has its downsides (obviously).

Citizenfreepress.com is a great one!

This is a good point. Even with Hillary as a running mate, it would still go to super delegates at the convention and Bernie would still have the most regular delegates/voters going into the second round. If the super delegates go to a Bloomy-Hilly ticket there would be physical violence. Antifa and Bernie Bros would set the convention on fire. That will likely happen anyway, but this would be all out war.

If she starts in with her screeching voice and her “no wayz taaarrdd” routine on the campaign trail, votes will be list.

Oh! And the hot sauce in her purse! She’s JUST LIKE us; who doesn’t feel taaaaard and lug around a bottle of hot sauce?

OMG, now I so want this to be true. Ooh, or on Biden’s ticket, he can talk about little black kids playing with his leg hair while intoning that Trump wants everyone “back in chains” while Hillary is in no wayz taaard and has the hot sauce in her purse to prove it!

notamemberofanyorganizedpolicital in reply to Fuzzy Slippers. | February 15, 2020 at 8:52 pm

Hilary was always the worst at faking a Southern accent….

Since she is Chicago born and raised, Hilary should be doing a South-side Chicago accent…..

Actually, I do. I even have a little belt holster designed to carry a 2 oz bottle of McIlhenny’s. You know, for emergencies, when I don’t have one of my standard 12 oz bottles on hand.

bwahaha! 🙂 And her hot sauce in her purse line didn’t win you over?

No, because she couldn’t open the bottle

Of hot sauce, that is. Chardonnay? No worries on that end

Hot sauce? I could believe Beano. But not hot sauce.

I’ll bet this started because earlier this week, Hillary indicated she would be open to the VP slot. So maybe someone asked MiniMike if he would consider it. What is he supposed to say? Absolutely not!? Yes would be a non-answer.

Even if he confirms it and means it, his candidacy would be cast under a shadow. Everyone would see it as a backdoor play for Hilary to get on the ticket without actually running or raising campaign money. Brokered convention, everyone assigns their delegates to Hilary and MiniMike kicks in $2B to her campaign.

Someone needs to ask him if that is his plan. My guess is this is a trial balloon to see if that happens.

A simpler backdoor would be for he and Hillary to win, then he resigns so Hillary becomes the first woman President.

Or she convinces him to travel to Benghazi on a diplomatic mission to meet with Obama.

and MiniMike kicks in $2B to her campaign.
———————–
I’m sure hildabeast would refuse such monies as everyone knows the dems keep saying there’s too much money in politics and Citizens United needs to be repealed……sarcasm off.

Scenario: Mini-Mike and Hildabeast are elected. How does Mini-Mike commit suicide?

notamemberofanyorganizedpolicital in reply to Tsquared. | February 15, 2020 at 8:54 pm

Face down in his 4 inch high platform shoes?

Drowns face down in a 52 ounce big gulp.

Tiny Mike hard up for a box upon which to stand.

If bloomberg picks that piece of garbage as a running mate, he risks ridiculous scandal (assuming Durham comes through), being a laughing stock for picking a criminal as a running mate, and losing his life (if he won, she’s shoot him herself).

So stupid. Just goes to show you what a hack bloomberg is.

Bloomberg’s biggest problem is going to be finding a VP candidate shorter than himself. She may be too tall.

He should pick that racist pig michelle obama: if he lays down he may not be as tall as the racist pig, but he’ll be as wide.

This will never happen. Media needs to let go of Shrillary

Uh huh!! Can’t call Hillary crooked anymore as US Atty Huber came just short of caller her the most ethical woman in America!

Via The Daily Beast:

Newly unearthed lawsuits against Democratic presidential hopeful Michael Bloomberg that have either been settled or dismissed paint a disturbing picture of misogynistic behavior. The never-before-seen legal briefs were provided to the Washington Post under the Freedom of Information Act and include complaints by a number of women that were followed up by attempts to keep them quiet. In one high-profile complaint, saleswoman Sekiko Sakai Garrison alleges that, when told of a male colleague’s impending marriage, Bloomberg suggested to female salespeople, “All of you girls line up to give him…..

If this is true, then Bloomberg must have a Arkancide wish!