NYPD Sergeants Union ‘Declaring War’ on de Blasio: ‘We Do Not Respect You’

NYPD Sergeants Union ‘Declaring War’ on de Blasio: ‘We Do Not Respect You’

“NYPD cops have been assassinated because of you. This isn’t over, Game on!” 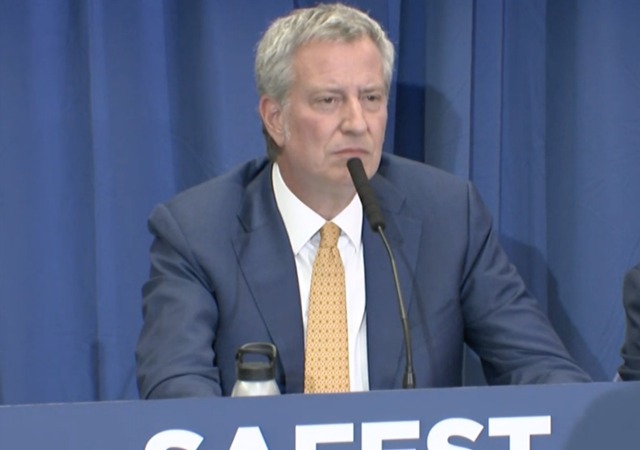 The NYPD’s Sergeants Benevolent Association (SBA) tweeted to NYC Mayor Bill de Blasio that the cops are “declaring war” on him after a man tried to assassinate two cops.

Robert Williams faces charges of attempted murder, criminal possession of a weapon, and resisting arrest. Williams allegedly injured 41 Precinct Lt. Jose Gautreaux on Saturday night as he sat with another officer in a marked patrol van.

Williams opened fire on the 41st Precinct on Sunday morning. He injured Officer Paul Stroffolino. Williams only surrendered when he ran out of bullets.

De Blasio tweeted out praise for the police and scorn for the gunmen. But if you know the history between them it sounds like he said it just because he had to say something. (I listed the topics we previously covered with de Blasio and the NYPD)

Obviously the union did not fall for it.

Mayor DeBlasio, the members of the NYPD are declaring war on you! We do not respect you, DO NOT visit us in hospitals. You sold the NYPD to the vile creatures, the 1% who hate cops but vote for you. NYPD cops have been assassinated because of you. This isn’t over, Game on! https://t.co/XyruPraM9T

Spokesperson Freddi Goldstein said Mullins “has forgotten his oath to protect and serve” and instead “threatens violence” while de Blasio “remains focused on the safety of our officers and communities.”

Mullins did not hold back in his individual comments:

NYPD Chief of Department Terence Monahan also took a swipe at Mullins, telling Pix 11 in an interview that “none of the other unions follow his lead.

President Donald Trump reacted to the shootings with a tweet that criticized New York leadership overall. The SBA agreed with Trump, which likely irritated de Blasio.

President Trump is 100% correct. NYS & NYC need the support of the Department of Justice. Criminals are being released, it’s time we prosecute in Federal Court. The Mayor is ruining NYC, cops have been stopped from doing their jobs. NYC is under siege. Send in the Feds https://t.co/OuOtwG5h7H

Reap what you sew, squish.

Same is going on in Seattle.

Earlier this month the Union elected a hard liner to stand up to the anti cop narrative of the Seattle City Council. It sort of punctuated the aftermath of a shooting downtown where the perps had been arrested 65 times. People (and attorneys) are afraid to show up for jury duty because the exist from their court house is a violent mugging gauntlet.

I am tired of the dredges of society bad mouthing our police. Civil society needs to start slapping them down.

I’ve heard people say the “Thin Blue Line” means corrupt cops protect each other. Couldn’t be further from the truth. Thin Blue Line means the police are few in number, but tasked with protecting all of society. Law abidingcitizens on one side, criminals on the other, the Thin Blue Line separating them. The line is thin but can not break, because if it does, chaos and anarchy ensues.

The term you seek is “the blue wall of silence”.

What we need is a green mile.

Mayor wants to shut down Rikers Island. It’s a huge facility. I wonder where all the prisoners will go?

The prisoners are going to go out into the streets to murder, rape,rob, pillage and burn. On the state level, years ago Mario Cuomo had part in transitioning Death Penalty sentences to Life Sentences. Now Mario’s older retarded son Andrew as governor wants to transition life sentences to parole. The intention is to empty the prisons. The 21st century remake of Escape from New York has a wall around the entire state.

Rikers is a jail, not a prison, so the prisoners there now won’t be there when it closes anyway. But the plan is for it to be replaced by new jails to be built in each borough.

Just look at what happened in New Orleans after Katrina for the best example of that.

I’ve always understood the thin blue line to be the police standing between civil society and criminals. If the socialists and the Democrats have their way, that thin blue line will be erased and we’ll all be running a gauntlet of thugs with clubs.

Once a city becomes a Dem-only govt, it’s like like demonizing of cops by sitting politicians becomes mandatory. Decade ago, Syracuse (NY) went to establish a civilian review board to oversee investigations in police involved violence cases.

Actually overdue, imho, when I was a kid the local cops had a reputation for at the least beating up any civilians who gave them lip, if not worse. One of my HS teachers was on crutches for a few months after he had been attacked at a bar, police showed up, they recognized his name (family owned a local bar known for fights that they wanted shut down), and he objected to them letting his attackers walk.

But when the subject of WHO would be eligible to sit on the board, city council lady ferociously objected to anyone with cops in the family being eligible. “They couldn’t be objective”. However, she had NO problem with members who either themselves or whose family members had had criminal histories. “People can change and deserve forgiveness.” Apparently no forgiveness for your relative being a police officer.

When I was a civilian member of the Use of Force Board, it included three cops, one of whom had to be Captain or higher. I advocated for removing the Captain and replacing him with a street cop, who would know far more clearly the stresses and risks of being on the street today. The Captain had not been on the street in the 2000s and did not know from first hand experience what a jungle the streets have become. The people judging our cops need to know how much legitimate fear there is amongst the cops when they patrol!

Like blacks having a bit over sevenfold higher crime rate and that a cop is 18 times more likely to be killed by a black man.

Those stats are stunning.

Everyone has a choice about rather or not they will be productive law abiding citizens, or not. I am tired of all the politically correct excuses for bad players, regardless of race.

Democrat controlled, long time dem controlled are worse. Take an objective look at any state or city that is on a decline. High taxes, budget deficits, crime, drugs, corruption, insane regulations. ALL have one thing in common. Democrats!! Keep voting for them if you like the direction your going. I can’t comprehend this at all> A state law that you can not suspend a student for unruly behavior or for disobeying a teacher?? If you have 2 brain cells you know where this is headed. We are banning plastic straws but giving you free plastic needles to bang all the heroin you want. Seriously?? Whats next free heroin for the people that cant afford it. Ooops forgot a good one. You can no longer buy a soft drink larger than 32 oz. You ignorant fool didn’t you know above 32 oz is not good for you. LOL The democrats (gestapo) want to control you!!

> Whats next free heroin for the people that cant afford it

Hey, don’t give them any ideas!

Ooops forgot a good one. You can no longer buy a soft drink larger than 32 oz.

Really? Where can you no longer buy that? Certainly not in NYC, where Bloomberg’s attempt went down in flames.

I have to add to my post. You don’t want your people to use a dirty needle. OK great. While you have people living on a side walk covered in dirt,trash,needles and turds.

Having a hard time worrying about unions all of a sudden noticing the democrats don’t really give a ship about their members only their votes.
Lay down next to the dogs, wake up with fleas.
—————————————
Relationship with Mayor Giuliani

The PBA’s relations with Mayor Rudy Giuliani (mayoralty, 1994–2001) were marked by years of labor disputes.

In 1997, it led a campaign asking Giuliani to not attend the funerals of city officers killed on duty.[15]

The PBA urged members to resist the mayor’s incentive pay initiative in 1998.[18] Additionally, in a five-year contract, officers were subject to a two-year freeze on salaries before seeing salaries increased 13 percent during the last years of the Giuliani tenure.[19]

During November of 2007, in anticipation of the 2008 presidential election, PBA president Patrick Lynch criticized the relationship between Giuliani and the NYPD. He said that the union would not endorse Giuliani. He criticized the mayor on pay issues, saying, “The inability to keep veteran cops on the job or to recruit adequate numbers of new ones can be traced directly back to the Giuliani mayoralty.” He added, “While the city was rolling in money, the Giuliani administration cried future poverty and stuck New York police officers with three and half years without a pay raise.”[19] Lynch further asserted that “Rudy Giuliani has no real credentials as a terrorism fighter.”[20]

Obama and DeBlasio will share a common legacy: “OFFICER DOWN!”

This guy better hopes he retains his personal guards, because it sounds to me like the cops won’t lift a finger to save him if anybody were to come after him.

I have long questioned whose side the Democrats Leftists are on. Consider how the Democratic Party controlled Virginia legislature is in the process of passing a number of gun control bills that makes it more difficult to legally own a gun while they refused to take action on a law increasing penalties for those using a gun while committing a crime. Add to this De Blasio’s behavior as well as that of the political leadership in Portland, Seattle, and so many other cities, where the police are prevented from do their work, new laws that all but eliminate accused individuals from needing to post bond, the decriminalization or reduction from felony status many laws that have allowed petty crimes to explode in so many communities, etc. One simple cannot be so stupid as to think that these actions will improve compliance with the law for everything in the universe points to how these actions only serve to enable criminal actions. The only reason left as to why these pro-criminal actions are becoming so common is that the Left/Democrats are aligning themselves with the criminals and against the lawful public which leaves the question of why the public continues to elect these people to be their leaders.

The Democrats know that a Second Great Civil Unpleasantness is coming, and are planning for it. The form will be different from the First. They are trying to create a battlefield that they believe will be to their advantage.