“O’Neill’s unjust termination of P.O. Daniel Pantaleo was merely the final straw: both men have displayed an appalling pattern of malfeasance and nonfeasance that disqualifies them from continuing to serve in their current offices.” 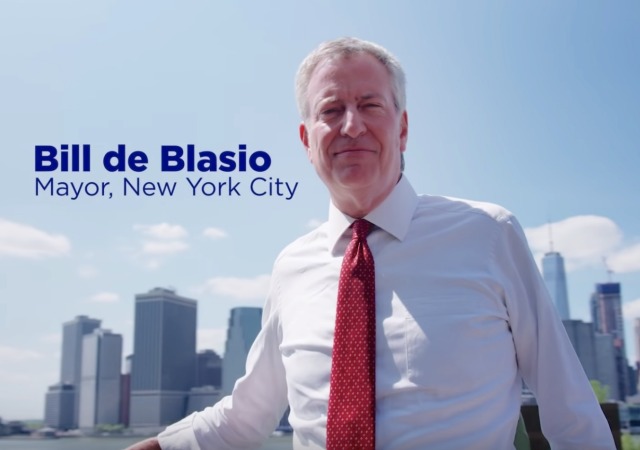 The Police Benevolent Association, the NYPD union, voted no confidence in de Blasio and Commissioner James O’Neill due to the firing of Daniel Pantaleo. He is the officer involved in the death of Eric Garner back in 2014.

O’Neill fired Pantealeo “after he faced disciplinary charges for recklessly using force by chokehold and intentional strangulation in connection with Mr. Garner’s death.”

The NYPD also confirmed its “officers had been making fewer arrests since” O’Neill fired Pantaleo.” The union did not “officially” tell officers to make fewer arrests. They did not comment on the situation.

“Today’s votes are an unequivocal indictment of our failed leaders in City Hall and 1 Police Plaza. For years, Mayor de Blasio has demonized police officers and undermined our efforts to protect our city. For years, Commissioner O’Neill has cravenly acquiesced to the Mayor and his anti-cop allies,” PBA President Pat Lynch said in a statement.

Meanwhile in a statement the NYPD said: “The dedicated women and men of the NYPD are out there each and every day, serving the public proudly and keeping the city safe. The Department stands with its officers, and will always support them and the brave work that they do. As the Police Commissioner has said before, his heart and soul are with the NYPD, and he is honored to lead this Department as it continues to drive crime to historically low levels.”

Lynch also said “O’Neill’s unjust termination of P.O. Daniel Pantaleo was merely the final straw: both men have displayed an appalling pattern of malfeasance and nonfeasance that disqualifies them from continuing to serve in their current offices.”

Lynch accused O’Neill and de Blasio of basing their decision on Pantaleo “on the politics” instead of the facts. He described “the events that unfolded in 2014 as ‘not a crime’ but a ‘chaotic situation.'”

De Blasio’s office was quick to dismiss the PBA vote as another attempt to “divide our city.”

“We won’t stand for it,” a mayoral spokesperson said. “Under this mayor and Police Commissioner, our officers and the communities they serve are closer than ever and the city is the safest it’s ever been. That isn’t changing.”

The NYPD and residents of New York City have long grown tired of de Blasio. He rarely stays in the city as he runs for the 2020 Democratic presidential nomination.

NYPD officers traveled to Detroit, MI, for the second Democratic debate. They stood outside in an effort “to convince our mayor to come back to the city and do the job he ran for rather than quit and start

A source told The New York Daily News on August 4 that “de Blasio ordered the NYPD Executive Protection to move his daughter out of her apartment.” The source described the situation as “abuse of city resourced.”

Residents posted “missing” de Blasio posters around the city since he has traveled to Iowa, New Hampshire, and South Caroline on the campaign trail.

But but but unions and dems are supposed to be big buddies. LOL gotta love it when that intersectionality crap bites them in their uppity progressives @$$es

notamemberofanyorganizedpolicital in reply to healthguyfsu. | August 29, 2019 at 3:33 pm

Have you seen this that happened yesterday?

But he’s the tallest cant-didate.SO in his mind hes already beat you guys

Regardless of De Blasio’s many faults, voters did not elect the police. Voters don’t serve the police, police serve the voters. If the police refuse to understand that, the voters or the elected mayor should fire them.

How many mayors have been killed in the line of duty in New York?

If the voters want a cop-killing enabler in City Hall, then the police should quit.

Politicians are elected to serve the voters, a responsibility they routinely ignore. The police are tasked to protect and serve EVERYBODY, and with few exceptions it’s a task they take very seriously.

Every law that’s put on the books is your holy “voters and public officials” saying “This is an action that we are willing to employ force to impose compliance.”

Force is not neat. Force is messy. If the “voters and public officials” don’t want force used, then they should not put the laws on the books. As long as they are there, they should back the people they send out to enforce them.

I think the police should do a partial strike – boycott black neighborhoods and the lefty hipster neighborhoods full of rich white techies who support BLM.

So both Brownsville and Williamsburg can see what it is like without those evil, racist police.

Where’s Frank Reagan when we really need him?

I don’t feel one bit sorry for the residents of NYC. They voted for Mayor Putz not once, but twice, and some of these very same residents voted for Occasional Cortex. NYC residents have made incredibly incompetent voting decisions. I guess it will take a near breakdown of life in NYC for the residents to vote in another Giuliani. Until then, they’ll kvetch and continue to vote for warm buckets of spit that appear on the ballot with a D after their names.

New Yorkers should be afraid. Garner was murdered and the cops are mad that they can’t commit murder anymore.