“Is it time for Elizabeth Warren” to drop out wondered Joe Scarborough on MSNBC’s “Morning Joe” program Monday. 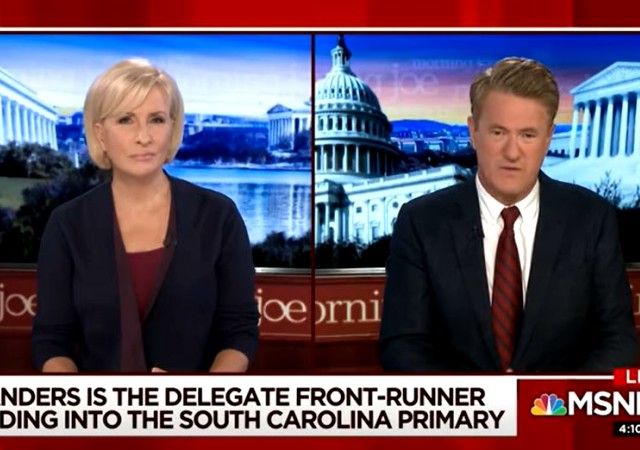 In the midst of Sen. Bernie Sanders’ star rising in primary polls, as well as his New Hampshire and Nevada victories, middle of the road Democrats like Clintonista James Carville and anti-Bernie Democrats like MSNBC’s Chris Matthews have been sounding alarm bells about how Sanders could fare against Trump in the fall.

Joining them in their efforts at trying to stop Berniementum have been Never Trumpers like fellow MSNBC host Joe Scarborough, who on Monday floated the possibility of Sens. Elizabeth Warren and Amy Klobuchar dropping out of the race altogether. The strategy behind this is so other candidates he and other Never Trumpers feel have a better chance of defeating Trump can pick up Warren’s and Klobuchar’s voter support and possibly overtake Bernie in the delegate count.

The idea was discussed during a Monday “Morning Joe” segment with Democratic strategist and former Hillary Clinton 2016 senior advisor Adrienne Elrod, who pointed out that candidates had to reach a 15% threshold in order to qualify for delegates in primary contests. She stated that the longer there were four or five other candidates in the race fighting for the “moderate” vote, that it made it harder for candidates like Joe Biden and Mike Bloomberg to reach that 15% threshold.

At that point, Scarborough turned to wife Mika Brzezinski to talk about Klobuchar’s and Warren’s track record to date, and wondered if it was time for the both of them to bow out:

“People are talking about how as well as she’s done, as good of a campaign she’s run, it is time for her to get out of the race,” Scarborough said of Klobuchar before pivoting to Warren. “A lot of people starting to talk about Elizabeth Warren, who finished weak again.”

“She finished in fourth place in her neighboring home state where she was supposed to win in New Hampshire last week. This week another disappointing finish. She’s maybe in single digits. She’s up to 10 percent now, but she’s in single digits in most of these counts,” he said.

“Is it time for Elizabeth Warren? If she keeps finishing in fourth, fifth place, is it time to her to get out of the race to help consolidate efforts against Bernie Sanders? That’s what a lot of buzz on Twitter suggesting that’s the case,” Scarborough concluded.

The issue was brought up to Klobuchar over the weekend, and she promptly shut it down:

Asked by a reporter on Sunday about her rationale for staying in the race, Klobuchar said,“Why would I get out? That’s not even a close call for me.”

The Hill also notes that Warren “believes she is building momentum after a solid debate performance last week” so she’s not going anywhere.

For the record, Scarborough is now being accused of sexism for suggesting the women drop out instead of Pete Buttigieg, Michael Bloomberg, or Tom Steyer.

For those of us in the cheap seats watching this all play out, it’s been interesting to watch prominent commentators like Scarborough who seem to have no core ideology anymore hit the panic button over Sanders. It’s as though they believe movers and shakers in the Democratic party actually welcome what amounts to interference in their nomination process from people who aren’t even Democrats.

I mean, you’ve got Bill Kristol begging President Obama to go to bat for Biden before Saturday’s South Carolina primary:

President Obama,
South Carolina was a key primary win in 2008. Joe Biden was your loyal VP. A Sanders nomination would relegate your presidency to an insignificant prelude to two terms of Trump or one of Trump & one Sanders. Passivity is a choice. Act. Go to SC & fight for Joe.

Kristol, like other Never Trumpers, has an alternative Democratic candidate to Biden in case the former veep’s campaign flames out this weekend:

Bloomberg has spent over $400m on ads making the case for himself, and it's not been ineffective–he's basically in second place nationally. There's one person ahead of him. Why won't he spend at least $100m next week in Super Tuesday states making the case against Sanders?

Washington Post “conservative” columnist Jennifer Rubin, also a Never Trumper, has been writing pieces giving advice to other Democratic candidates on how to take down Sanders (because her efforts at taking down Trump in 2016 worked so well):

If Warren, for example, wants to win the nomination and not simply avoid offending Bernie Bros, she must turn the debate to Sanders’s record. He voted for the 1994 crime bill and favored the expansion of prisons -part of mass incarceration of blacks. https://t.co/PuoeZ3KTpp

Biden should remind voters that if Sander is nominee both sides will be hell bent on destroying Obama's legacy https://t.co/PuoeZ3KTpp

Rick Wilson, who comes off as the de facto spokesman for the Never Trump movement, has taken to fighting with “Bernie Bros” over Sanders’ praise of murderous former Cuban dictator Fidel Castro:

I might know a thing or two about Florida. Maybe.

But by all means, B**nie Bros, tell me more of your vast experience here and how much Florida loooooves Castro and how “but literacy programs” is gonna sell, not only in Dade/Broward but, well, everywhere.

Tom Nichols, who has advised that the only way the Republican party can be saved is to vote for Democrats, has gone Code Red against Bernie:

The Democratic Party should do everything it can to stop Bernie, not because he is a socialist – that's bad enough – but because he will lose to Trump. https://t.co/NBbPfz0Yd6

This is a birds-eye view of what it looks like to live on Never Trumper Island:

Such islands, where the only sounds are crickets chirping and waves lapping, form only after all bridges are burned, or so I’ve heard.

What a clusterf**k! The whole thing is rigged anyway. The two women should raise their asking price to drop out …. (2) vacation homes each, a convertible, SUV, a prime speaking spot at the convention, and $5M cash. Don’t settle for less, ladies.

notamemberofanyorganizedpolicital in reply to walls. | February 25, 2020 at 7:36 pm

Heck, they should “DEMAND” the VP slot.

Here’s the Democrats dumping their Never Trump Lovers and forcing them to do the Walk of Shame the morning after.

The love affair between the Left and NeverTrump Right appears to be over. For real, this time.

After working in tandem for four years to try to destroy Donald Trump and everyone in his orbit, NeverTrump and the Left are breaking up in a very public and a very ugly way. …..

The split couldn’t be happening to a more deserving couple—or dare I say, in honor of former Representative Katie Hill (D-Calif.), a more deserving throuple since it also included a willing canoodler in the corporate media…..

NeverTrump is getting the boot for breaching the boundaries of this toxic relationship by daring to opine about the seemingly unstoppable candidacy of Bernie Sanders. Trouble in paradise began when NeverTrump changed the mood music from Orange Man Bad to Crazy Bernie Bad as the commie senator from Vermont began to dominate early Democratic presidential primary contests.

NeverTrump, consisting mostly of Democrats disguised as Trump-hating conservatives so they can keep their gigs on MSNBC and the Washington Post, are encouraging Democratic voters to dump Sanders in favor of a more reasonable Democratic candidate (LOL) who could beat Donald Trump in November…..

Lots more good reading about that at:
https://amgreatness.com/2020/02/24/the-left-dumps-nevertrump/

I’m going to need a lot of bourbon after reading a post with a photo of sourpuss Mika and whipped Joe then, as if that weren’t enough pain, you forced us to read tweets by a**hats Bill Kristol, Jennifer Rubin, Rick Wilson AND Tom Nichols!!?? Holy cow.

The image posted by pourmecoffee/twittwer?

That’s a real USCG photo of castaways. I recall seeing it at the USCG rescue website maybe 10 years ago.

notamemberofanyorganizedpolicital in reply to Tiki. | February 25, 2020 at 8:01 pm

Image info says its from PBS(?).

notamemberofanyorganizedpolicital in reply to Tiki. | February 25, 2020 at 8:04 pm

“Rahm Emanuel has just unlocked the Mayor badge in Chicago.”

“There, in less than 140 characters, is an exquisitely amusing encapsulation of the news that the White House chief of staff aspires to one day serve as mayor of Chicago.

For those who don’t get the joke, well, join Twitter and figure out what FourSquare is. But a lot of people are getting the joke. @pourmecoffee is the satirist responsible for those bon mots….

The the long and the short of it is: clear the field of all but white makes.

If they cut off their noses, I will do what they say, i.e.:

(I will) hold their nose and vote for X (the lesser evil).

God delivers in abundance. Including the “make my enemies ridiculous” prayer.

You know what the good thing about #NeverTrump-ers are?… I can’t think of anything either.

I kind of hope bernie’s army will invade the never Trumper’s offices and homes. Just for grins and giggles.

It must be horrible to be slapped around by your wife every evening.

Do you think she will make him stop wearing her panties?