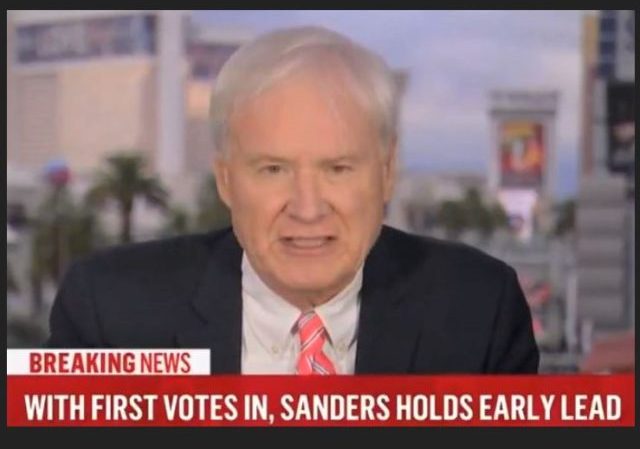 Chris Matthews on MSNBC is not taking Bernie’s victory in the Nevada caucuses well. It signals to him that Bernie is unstoppable in the Democrat primaries. Such a result would be the end of the Democrat Party as a viable force, a result so serious that he compared it to the fall of France in 1940 to Germany.

MSNBC’s Chris Matthews likens Sanders victory in Nevada to Nazi Germany overrunning France in 1940: “It’s too late to stop him … it’s over” pic.twitter.com/6GJetLoDkq

Mediaite has some of the trancript:

Matthews came on after Democratic strategist James Carville went on a diatribe against Sanders, and as the MSNBC host made reference to that, he invoked the historical episode when the Germans overran the Maginot Line and forced France to surrender in the middle of World War II.

“It looks like Bernie Sanders is hard to beat right now,” Matthews said. “I’m with Carville all the way in terms of the dangers of what lies ahead in November. They’re sitting on so much oppo research on Bernie.”

But Bernie “did his job” in Nevada, Matthews said, adding “it is pretty much over.”

Matthews continued with a comment on those who haven’t yet understood Sanders’s grip of the race:

I was reading last night about the fall of France in the summer of 1940, and the general, Reynaud, calls up Churchill and says, ‘It’s over.’ And Churchill says ‘How can it be? You’ve got the greatest army in Europe. How can it be over?’ He said, ‘It’s over.’

Don’t like the analogy? Perhaps this is a better one:

I completely agree — a far better analogy is to say Sanders has stormed the Democratic Party like the Bolsheviks stormed the Winter Palace. https://t.co/hmt3Tlbids

The divide is and has for a while been between those who say “Leave me the heck alone (and I’m really to busy to bother so I will leave you the heck alone)”. Do whatever your marriage thing is but don’t ask me to create a cake for your wedding.

The other side is the continual purity test SJW virtue signalling including the greening and socialism.

Carville and Matthews are hypocrites in that they do wish to impose a “lite” version of things, but on the entire country, using votes, or courts, or “by any means necessary”.

Their only complaint is that Bernie is too obvious and may go too far (or do it too fast). They only differ in degree, not kind. Or as Bertrand Russell put it “Madame, we have established what you are, we only have a disagreement about the price”.

The powerbrokers in both wings of the Uniparty know that Sanders can’t win. I hope that he’s got bodyguards and food tasters at least three layers deep, because Epstein didn’t kill himself.

I hear the Suicide Hotlines are all busy tonight

Hillary has them tied up while she places her order

If it goes to the Convention, Hillary thinks she will get the nod.

Speaking of that, why is there no mention of the murder of DHS whistleblower Philip Haney who exposed the muslim bro. infiltration of the 0 admin?
Yesterday, it was “murder” and no gun found; today, it’s “suicide”.

As he allegedly predicted.

Coronavirus is likely curable, Sanders and his aligned ideological followers are a global economic cancer. US is global reserve currency, and has trillions in foreign investments. Sanders, his platform and his core ideological views are massively value destructive to global wealth and stability – the attempt to implement his ideas will make the 2007-2009 market meltdown seem like a picnic.

Markets anticipate and would decline long before there is any “attempt to implement his ideas.” Leon Cooperman is right and if a brokered convention does not result in Bloomberg as the nominee, I really wonder if “Mini-Mike” will put any money into electing Bernie.

Between coronavirus and Bernie’s ascendance, anyone with money in an IRA or 401-k should be considering whether changing the allocation to more conservative investments is appropriate.

Well said but the markets “anticipation” movement or price action is also a function of past market sell offs. Sanders and his commie/socialist ilk are uncharted waters for global markets thus increasing the probability of uncharted market sell offs. Most US investors will likely stay invested in US markets and hope and believe that the market will recover but imo, there is at least a 50-50 chance that foreign investors in US pull out more than we’ve ever experienced. Facts sometimes follow prices vs leading markets imo.

I want some of Mister Matthews pills and/or booze.

Minus his spittle-flecks, of course.

Trump must be protected from the corona virus.

Yes, I worry about his upcoming trip to India.

Hey Chris, a better example is Hitler falling to Stalin in Russia. Hitler was leader of the National SOCIALIST German Workers’ Party; Stalin was leader of the Russian Social DEMOCRATIC Labour Party.
Both of these maniacs had an ideology that promoted a class tiered socialistic government. All of the current dem candidates are variations of socialism who promote systemic transformation not unlike the early days of Hitler and Stalin.

The Germans did not overrun the Maginot line, they bypassed it.

Yes, France built a huge fortress complex to block the invasion route the Germans didn’t take in 1914, only to find that they didn’t take it again in 1940. Brilliant.

This is the Democrat Party of 2020. The old guard has been living a lie…thinking they could expand the Party with the Far Left and not suffer any consequences. The hard left has more money than the central committee. The hard left is the party.

Matthews and his ilk are more like Dr Frankenstein, and finally realized their monster Socialism/Communism/Fascism has gotten loose.

If bernie sanders was elected president, it’d be the end of our nation as we know it.

Obama and clinton at least had to hide their treason.

Bernie doesn’t scare me, but the fools who vote for him are terrifying. Regardless of how this election turns out, they aren’t going away.

These monsters exist because of boehnerism.

The likes of boehner sold us out and gave away our country.

Not only are they not going away, they will increase until conservatives quit wasting time and energy on the less important issues and attack head on the fact that out schools, from K to PhD, are liberal indoctrination centers. Until we return them to centers of learning we will continue to play catch up. We go to Trump rallies, but can’t make the time to go to school board meetings. We com-lain about abortion funding but give schools billions to further the indoctrination of our children.

It is the MOST important issue we face. Everything else is just a holding pattern until we fix it.

Matthews is having a crisis. He thought that things like ‘socialism’ and ‘medicare for all’ were just bullshit that the party said to get votes (not unlike Republicans that promise to cut the debt).

He didn’t think they were actually going to try and DO IT.

Comrade bernie would have clawed his way up to the last Huey out of Saigon, kicking refugee families out of his way, ill gotten đồngs flying out of his overstuffed pockets, screaming “Seize the means of production!” as he flew off to the land of the big PX. Since we’re doing weird historical references.

ill gotten đồngs flying out of his overstuffed pockets

that takes on a whole new meaning when you think about his old porn/rape fantasy writings…..

Sanders is not even a Democrat. He’s an “independent.” After 2016, he refused to caucus with the Dems.

I understand why he wants to run as a Dem. As an independent or as a commie/socialist he has even less of a chance than he does with the Democrats.

But why oh why has the party leadership allowed him to run with them if they are so afraid of him?

“… why has the party leadership allowed him to run with them…?”

Perhaps they have more arrogance than brilliance.

I do not understand why the Bernie supporters don’t just move to Cuba or Venezuela or North Korea or China or wherever Utopia already exists. Perhaps we should offer free tickets as they like free stuff.

But why oh why has the party leadership allowed him to run with them if they are so afraid of him?

I don’t think they can stop him. As far as I know neither party has any control over who runs in their primaries.

Should be corrected to:

BTW, I take Matthews’ analogy as an extension of the “Trump is worse than Hitler” nonsense. The Dems are going to lose to Trump the way France lost to Hitler. Speaks volumes about why Americans have turned off the MSM, Hollywood and the rest. They just refuse to open their eyes and see reality. Their non-stop cartoonishly shrill attacks on Trump have turned him into an unstoppable colossus.

For all their rhetoric, no smart Democrat wants to run against a popular incumbent President. The party will be back for the next election. Then we will find out how bad their candidates are, when there’s a good opening to win.

gee allowing someone from a third party (I)to caucus with a different party somehow didn’t work out well for one party.
who could have thunk that??

Trump will stop him.

Perhaps this will be the question which many Democrats must answer in November. Stick with the current ‘devil’ they know which has attributes they have and want to continue to profit on or oppose and pay double for the ‘devil’ they do not know. Party affiliation will not be the deciding factor no matter what the polls report as we have come to realize over the past 5 years.

Bernie or Trump? What will Bill Kristol and the other conservative NeverTrumpers do? Decisions, decisions.