It could break the cycle of failure … if the Palestinians want it to. But all indications are it will be rejected. 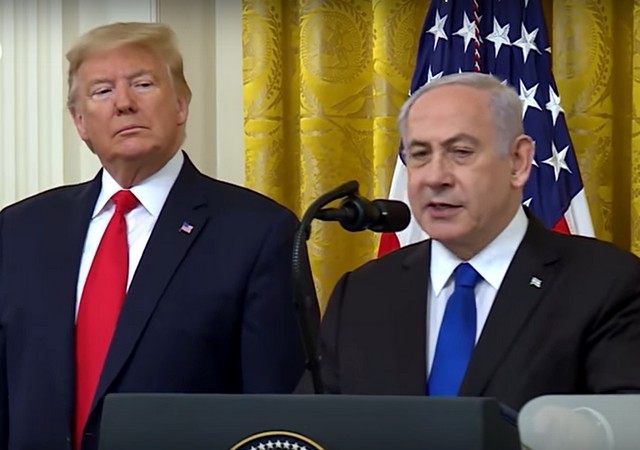 The top two contenders to be Israel’s next prime minister — Netanyahu and his challenger, former IDF Chief of Staff Benny Gantz — support the deal. Naturally, the Palestinians said that it’s a non-starter.

The current Israeli-Palestinian peace process since early 2014, when Palestinian Authority President Mahmoud Abbas agreed to a unity government with the terror group Hamas. (It’s also worth noting that the Obama administration had put forth a diplomatic framework that Netanyahu reluctantly accepted and Abbas refused to acknowledge.)

Before covering the implications of Trump’s peace plan, it’s worth giving some background.

We all know the language by now. The goal of Israeli-Palestinian is “two states living side-by-side in peace and security,” or some similar formulation.

But the crystallization of the idea that peace demanded statehood for the Palestinians wasn’t made explicit until President Bill Clinton enunciated the “Clinton parameters” — after Yasser Arafat refused Israeli Prime Minister Ehud Barak’s peace offer in 2000 and subsequently launched the so-called “Aqsa intifada” later that year — in an effort to quell the violence of the new terror war launched by the Palestinians against Israel. It was later reaffirmed in President Bush’s Rose Garden speech in 2002. (More on this later.)

But Palestinian statehood wasn’t always viewed as a necessity. In a tweet, Michael Doran recalled that Trump’s vision is similar to the terms for peace laid out by the late Israeli Prime Minister Yitzcha Rabin in his final speech to the Knesset in 1995.

The ironic thing is that thinking on the peace process has evolved so much in the past 24+ years, despite the Palestinian refusal to eschew terror, negotiate directly, or recognize the right of Israel to exist as a Jewish state, that Rabin’s vision would now be considered by many to be “extreme right-wing.”

As mentioned above, Bush laid out a vision for “two states, living side by side in peace and security,” in a speech delivered in June 2002. In the speech, Bush called for “a new and different Palestinian leadership, so that a Palestinian state can be born.”

Over the past 26 years Israel has retreated from the main Palestinian population centers in the West Bank (1995) and withdrawn totally from Gaza (2005). Both of these increased the terror risk to Israel. In the meantime, the Palestinians have rejected at least three peace offers (Camp David, 2000; Clinton Parameters, 2001; Olmert-Abbas, 2008). Hamas, a genocidal terror organization, has full political and military control of Gaza. The corrupt Palestinian Authority rules much of the West Bank and incentivizes terror.

Yet the peace processors will insist that Israel must make peace — including a Palestinian state — to maintain its legitimacy. Thus the Palestinians by failing to build the institutions necessary for statehood (and refusing to accept Israel’s right to exist as a Jewish state) hold veto power not only over peace but over Israel’s legitimacy. Under the old way of thinking what incentive do the Palestinians have to compromise for peace?

What’s in the Deal?

The deal is being described as favorable to Israel. To some that’s a bug; to others a featured. The Jerusalem Post summarized the main of the deal:

The Trump plan would allow Israel to retain about 20% of the West Bank. Israel would be called upon to cede some land in the south near Egypt’s border with Gaza. The plan also leaves open the possibility that Israel could cede the Triangle — three Arab cities in the Galilee — to a future Palestinian state, subject to negotiations between the parties.

Israel will be allowed to keep 15 communities as “enclaves” within the future Palestinian state. Israel would be responsible for their security.

Under the plan there could be a Palestinian state in four years if the Palestinians meet certain conditions. The total area of the state would encompass about 70% of the West Bank, including what is termed Areas A and B. The Post explains:

The state will only come into existence in four years if the Palestinians accept the plan, if the Palestinian Authority stops paying terrorists and inciting terrorism and if Hamas and Islamic Jihad put down their weapons. In addition, the American plan calls on the Palestinians to give up corruption, respect human rights, freedom of religion and a free press, so that they don’t have a failed state.

If the Palestinian Authority meets these conditions the United States would recognize the state and promise a massive aid package. During the four years, both sides would also be barred from beginning new construction in any part of Area C where it did not yet have a presence.

The plan would also allow for a limited number of refugees to settle in the new Palestinian state.

Also in the Post, Herb Keinon explained the importance of the map included in the plan:

The presentation of a map does not a deal make, obviously, and there is no guarantee that there will be a Palestinian state. But if there ever is one, this map shows the territory that Israel feels it can live with within the context of that state. It shows, for the first time, the territory Israel feels is vital for it to retain in a situation where it cedes land to the Palestinians to separate from them.

The map, by the way, shows that Israel would retain control over the Jordan Valley — the land just to the west of the Jordan River — which was one of the demands of Yitzchak Rabin.

Moshe Koppel, chairman of the Kohelet Policy Forum, identified the key difference between the Trump plan and previous peace plans.

The demand that the Palestinians take significant steps to demonstrate their peaceful intentions prior to receiving any concessions is the key change in approach. Stability will only be achieved when the Palestinians are treated like responsible adults; the perfectly reasonable demands being made of them as prerequisites to statehood do exactly that. The fact that all of their supporters regard the expectation that the Palestinians will act like responsible adults as an unrealistic and unreasonable imposition tells us all we need to know.

The most important & useful part of Trump's approach is that unlike in every past effort, he is putting onus on the Pals to seize the opportunity to build a state, as opposed to pressuring Israel for concessions and allowing the Pals to sit back and say no to everything

Will the Trump plan bring peace between Israel and the Palestinians? It’s impossible to tell.

The Palestinians have expressed their opposition to the plan. Abbas said, “1,000 “nos” to the plan. And of course, there are violent protests.

Wait, you mean the Palestinians reacted to a peace offer with violence? That would be…the same thing that has happened after every single Israeli peace offer. Ever. https://t.co/NVzHYmNEoU

For the Trump plan to work, the Palestinians will have to change their attitude.

Sanders, Warren & ten other Democratic senators do not. https://t.co/fT4hqEiXC2

Michael Makovsky had a nice thread assessing the Trump plan.

In particular, this point is important.

Another guiding idea: US & Israel will not wait forever for Palestinian participation. Progress will no longer be held hostage by Pal intransigence. Waiting for them has led to no deal, often violence, and no progress. If necessary, US & Israel will proceed together, w/out PA. 6/

While there are aspects to the plan that are questionable — for example, a tunnel extending from the West Bank to Gaza and Palestinian statehood — if the Palestinians want a state, they will have to take responsibility for themselves. That is the most encouraging part of President Trump’s vision.

Prediction: The Palestinian Arabs will not miss this opportunity to miss an opportunity.

The only thing which might change palestinian outlook is an unprecedented ass whipping.

jews are collectively a tremendous asset to humanity, palestinians a huge liability. They are useless, to themselves, to their children, and to nearly everyone who has to deal with them.

It would be hilarious if even Iran comes around to supporting it before Biden does.

I don’t think it really matters what the Palestinians “want” any more. They require a plan to be imposed on them. Trump need the cooperation of the Gulf States to stop all financing of the Pali’s, and he needs to shut off Iranian funds going to them. Abbas is 84 years old, he won’t be around much longer, and after he goes the PLA will be in chaos.

Did you notice that there were representatives of the Gulf States at the announcement? AND the Saudis. Anytime anyone wonders why we still work to keep up strong relations with the Saudi’s, THIS is why. And I don’t just mean Israel; the covert backing we get from the Saudi’s across the middle east is incredibly valuable to us.

There will never be a M.E. peace deal. It is one of the few things I don’t like about Trump.i dont mind so much that he talks about. Talking about it is fine.

Believing in it isn’t.

Cut the palestinians lose and send all the aid they would have gotten to the Kurds in Northern Iraq.

Trump needs to tell the Palistinians, “Here’s the deal. Here are the consequences if you break it. And here are your choices: take it or leave it.”

Arab countries despise palestinians, they don’t want them. Palestinians are like rabid dogs, and need to be handled the same way we handle the dog. The only difference is that we are sad when we have to put the dog down.

Yes, they hate them but it is their problem, not Israel’s problem. Besides, many Arab countries are empty space anyway.

There is no such thing as a Palestinian Arab. They are just Arabs. No, wait one. There are many of them who aren’t even Arabs. What you find in Judea and Samaria speak Arabic, but they could have come from anywhere in the former Ottoman Empire.

They are no different than the people you’ll find in Jordan or Syria. There is no cultural or linguistic difference.

Actually there are linguistic and cultural differences. For instance “Balestinians” can’t pronounce the letter P. That’s why they call it “Filastin”.

Historically the Arabs of what became known as “Palestine” were poor tenant farmers and share croppers, and looked down on by the Arabs of more prosperous parts of the Levant.

There will never be a deal re: Israel-Palestine. The problem is money. Palestinian leaders are getting rich off the Palestinian Authority. Arafat had over $10 million dollars personally squirreled away in France, at the time of his death. The US gives $50+ millions of dollars to the PA every year and no one seems to know where it goes. This stopped, in 2019, when the Anti-Terrorism Clarification Act was passed in 2018, which allowed US citizens to sue states, which received US foreign aid to be sued for complicity in acts of war or terrorism. The PA still receives hundreds of million of dollars in “foreign aid” from the international community. This does not count the number of NGOs which receive similar aid for Palestine.

As much as we would like to believe that politics is about higher causes, it is really all about the Benjamins. Once you begin following the money, all things political make so much more sense.