Obama Achieves Peace In Middle East … Between Fatah and Hamas

Obama Achieves Peace In Middle East … Between Fatah and Hamas 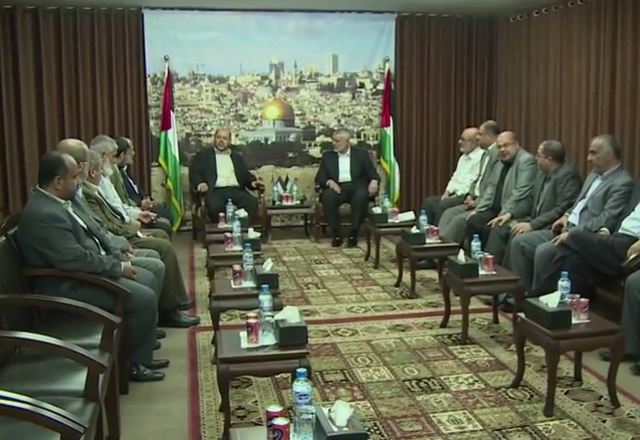 Fatah and Hamas have reached an agreement to put their differences behind them and form a unity government.

The two groups — the Palestine Liberation Organization, which runs the Palestinian Authority in the West Bank, and Hamas, the militant Islamist group that dominates the Gaza Strip — have reached similar accords before that were never carried out. But the latest deal comes as the fragile American-brokered peace efforts between the Palestinians and Israel are approaching an April 29 deadline without a resolution in sight. People familiar with the discussions have said the Israeli and Palestinian sides were far apart even on how to extend the talks past the deadline.

Analysts remained skeptical about whether the Palestinian reconciliation efforts would lead to a tangible change on the ground, because neither of the factions has shown interest in genuine power-sharing in the past, and they have deep differences over how to deal with Israel, which Hamas does not recognize.

Even so, some experts said that the latest effort at reconciliation appeared more serious than past attempts, because both factions are under growing pressure. Gaza under Hamas has been severely weakened by an Egyptian crackdown on the smuggling tunnels along the Gaza-Egypt border and an Israeli blockade. And Mr. Abbas, for his part, has faced growing criticism from West Bank residents about the negotiations with Israel and his own legitimacy, with Palestinian elections long overdue. He has threatened to dissolve the Palestinian Authority, which exercises limited self-rule in the West Bank, if the talks with Israel end in failure.

No Hamas does not recognize Israel. It is also a genocidal terrorist organization devoted to destroying Israel. Note terror is not mentioned.

To be sure, in order to make peace the Palestinians need a unified leadership. One of the follies of Kerry’s peace processing was to push for a deal in the absence of unity. So now, Fatah has chosen unity. Even if this unity agreement fails like the other previous ones, what does it say about Abbas that he can make an agreement with Hamas, which is devoted to destroying Israel, even as he claims that he is committed to peace with Israel?

Three years ago Barry Rubin asked why Fatah expelled former Gaza security chief Mohammed Dahlan. The ostensible reason for Dahlan’s expulsion was corruption. Rubin rejected that explanation because “if that was the standard held to by Fatah its leadership would be meeting in a Volkswagen bug.”

Most likely, there is something else and something more important at that: Dahlan hates Hamas and Hamas hates him. It is reasonable to think that he is being forced out because he opposes Fatah’s cooperation with Hamas. Dahlan believes that in any such deal Fatah will eventually be the loser and Hamas will take over the PA. I think he’s right. With all of his faults and failures, throwing Dahlan out of Fatah is one more step to that group’s decline.

Without a clear commitment from Hamas that it is abandoning its aim of destroying Israel, today’s agreement, like Dahlan’s expulsion, shows that Fatah is more committed to terror than peace. 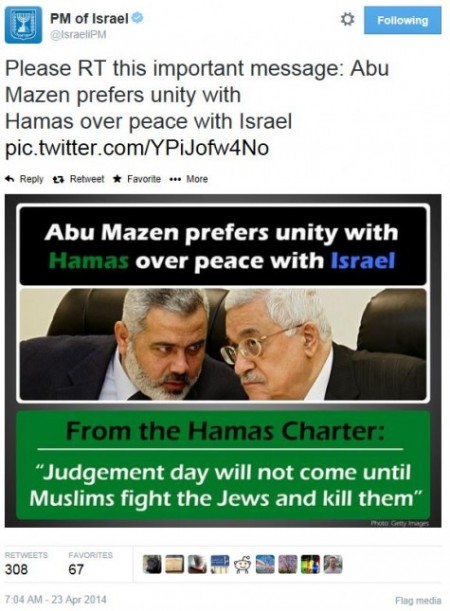 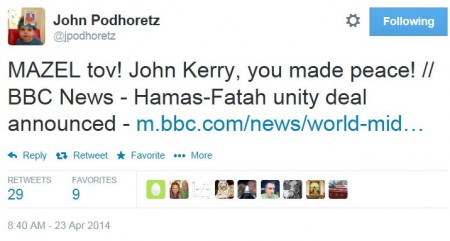 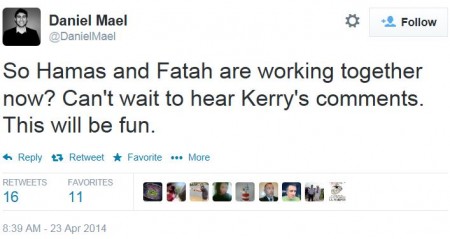 Our goal in Gaza and the West Bank should be encouraging them to kill each other to the extent that it keeps them from killing Israelis. I’ve stopped hoping they’ll kill themselves off.

It will forever be seared in Kerry’s memory that while the Israeli’s undermined the peace process, he kept them from breaking the law … of unintended consequences.

John Kerry should be deliriously happy that someone actually took his phone call.

The sheer absurdity of the entire charade of the “peace process” is that the ONE thing that Hamas and Fatah agree on without argument is that they will NEVER recognize Israel.

These people won’t honor their past promises. Why would any sane person think you can “negotiate” with the like?

Again, this is why for the last 20 years or so we only hear about the “peace process.” The interlopers now understand there will be no real peace, so they are all in for the “process.”

And what is the “process,” you may ask? It goes like this: The Palestinians attack Israel, set off bombs, fire rockets, and kidnap soliders until the “international community” pressures Israel to “come to the table.”

Once at the table, Israel is browbeaten into releasing some murderers from prison “as a sign of good will.” Neither Fatah nor Hamas is ever asked for signs of their own “good will,” as everyone knows they have none.

Once prisoners are free to kill again, the Palestinians extract any other minor concessions they can before breaking off the talks and going back to bombs and rockets, perhaps with an “intifada” thrown in.

As he (Obama) said in his book, he will stand with the Muslims. He’s helping fund Iran’s nuclear program by unfreezing billions of dollars in assets and giving it back to them, he gives billions to Hamas by sending “aid” to Palestine, and he gives billions to Pakistan which is one of the major backers of worldwide Muslim terror.

Actually, this was a US goal as it removes one of the obstacles to (theoretically) having an agreement. Of course, what it really does is endanger Israeli civilians further, but if Obama/Kerry cared about that, they wouldn’t have had us release murderers, wouldn’t they.

LHC – In what way did we (Israel) sabotage the “peace process”?

C’mon, David, stop being so naive. This peace agreement was what Obama intended all along. You can’t imagine that his and Kerry’s rhetoric was intended to be helpful to Israel!

Come, let us treason together!