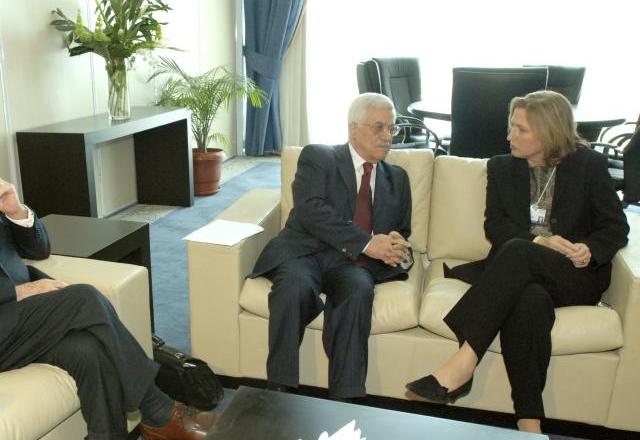 In his column yesterday, anti-Israel columnist Roger Cohen of The New York Times talked to Tzipi Livni, candidate for prime minister and Israel’s peace negotiator, about why the John Kerry-sponsored peace talks failed earlier this year. Livni tells of the three ways the Palestinians destroyed the peace talks.

The administration in March had presented a framework for both sides.

Livni considered it a fair framework, and Netanyahu had indicated willingness to proceed on the basis of it while saying he had reservations. But Abbas declined to give an answer in what his senior negotiator, Saeb Erekat, later described as a “difficult” meeting with Obama. Abbas remained evasive on the framework, which was never made public.

One part of the framework was to accept the 1967 lines (really the 1948 armistice lines) as the basis of negotiations. In other words, Netanyahu made a major concession here and Abbas still refused to play ball. Still at the behest of the administration talks continued and a few weeks later, the Palestinians were at it again.

Then, Livni said, she looked up at a television as she awaited a cabinet meeting and saw Abbas signing letters as part of a process to join 15 international agencies — something he had said he would not do before the deadline.

Abbas offered the excuse that Israel was stalling. Still, this was a unilateral action outside the framework of negotiations and a broken promise.

Finally, there was this:

Talks limped on around the idea of a settlement freeze and other confidence ­building measures. Then, on April 23, a reconciliation was announced between Hamas and Abbas’s Fatah — something since proved empty. That, for Netanyahu and Livni, was the end: They were not prepared to engage, even indirectly, with Hamas.

This is important. Livni is trying to establish herself with a sympathetic columnist, and yet Abbas’ stunts were too much even for her. In other words, even if she had been prime minister, there would have been no deal. It really doesn’t matter if the Fatah-Hamas unity government “proved empty,” Fatah had made a deal with an unrepentant terrorist organization. Fatah violated its commitment to renounce terror.

Cohen, unfortunately, spins this final blow to the peace process this way:

A long season of negotiation gave way to recrimination and, soon enough, the Gaza war, with nearly 2,200 Palestinians dead and about 70 Israelis.

Hold on. The way to cap off what Livni said is to acknowledge that three times the Palestinians destroyed the negotiating process. They refused to accept a framework that Israel had done, they went ahead with unilateral actions and finally made a deal with terrorists.

Cohen is unable to acknowledge this. For him it’s simply a matter of recriminations, that both sides contribute to equally.

Livni concludes, “For me, any day that goes by without a solution is another lost day. For those believing in the idea of Greater Israel another day that passes without an agreement is another day of victory and taking more land.” This would be more convincing if she showed that somehow Netanyahu was responsible for the talks’ failure. But she didn’t. She showed that even she, the self-proclaimed moderate, couldn’t make a deal with Abbas.

The PLO has stated in it’s charter that they will not accept the Zionist presence in the indivisible Arabian lands, of which Palestine is.

Article 9: Armed struggle is the only way to liberate Palestine. Thus it is the overall strategy, not merely a tactical phase. The Palestinian Arab people assert their absolute determination and firm resolution to continue their armed struggle and to work for an armed popular revolution for the liberation of their country and their return to it. They also assert their right to normal life in Palestine and to exercise their right to self-determination and sovereignty over it.

Article 15: The liberation of Palestine, from an Arab viewpoint, is a national (qawmi) duty and it attempts to repel the Zionist and imperialist aggression against the Arab homeland, and aims at the elimination of Zionism in Palestine. Absolute responsibility for this falls upon the Arab nation – peoples and governments – with the Arab people of Palestine in the vanguard. Accordingly, the Arab nation must mobilize all its military, human, moral, and spiritual capabilities to participate actively with the Palestinian people in the liberation of Palestine. It must, particularly in the phase of the armed Palestinian revolution, offer and furnish the Palestinian people with all possible help, and material and human support, and make available to them the means and opportunities that will enable them to continue to carry out their leading role in the armed revolution, until they liberate their homeland.

Article 19: The partition of Palestine in 1947 and the establishment of the state of Israel are entirely illegal, regardless of the passage of time, because they were contrary to the will of the Palestinian people and to their natural right in their homeland, and inconsistent with the principles embodied in the Charter of the United Nations, particularly the right to self-determination.