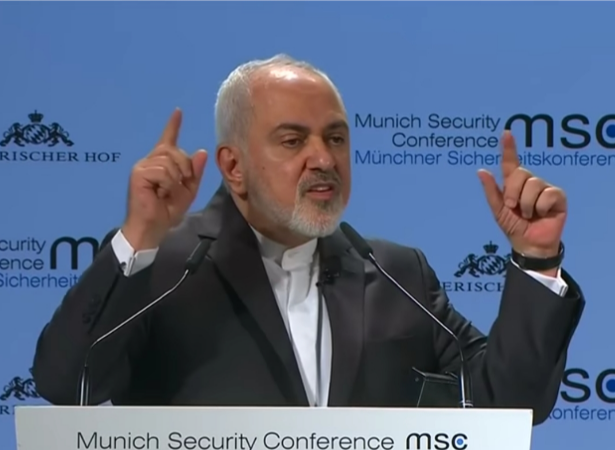 The notion that the international law worked only for those who were “blue-eyed” angered Iranian Foreign Minister Javad Zarif.

“We do not accept such racism,” he added.

Zarif was irked by the sudden invocation of Article 36 of the 2015 nuclear deal by the three European powers earlier this month, which launched a disciplinary motion against Tehran for violating the accord.

France, Germany, and the UK triggered the dispute mechanism on January 14 in keeping with the provisions of the nuclear deal. Iran will now be facing a Joint Commission comprising of Russia, China, the three European signatories, and the European Union. If this multilateral panel fails to reach a resolution, the dispute will then go to the United Nations Security Council. The UN body could impose worldwide sanctions against the Iranian regime over its continued violation of the nuclear deal.

Iran’s foreign minister says Britain, France and Germany have shown “racism” by activating a dispute mechanism in the 2015 nuclear deal.

In a televised speech in Tehran, Mohammad Javad Zarif slams the “illusion” that “only the blue-eyed” can benefit from international law.

In the face of “repeated violations by the United States and Europe, Iran does not have the right to use Article 36 (of the deal) despite several written notifications to European officials,” Zarif says, without elaborating how Iran has been denied that right.

“We do not accept such racism,” he adds.

Eternally pissed at the United States, the Mullah regime has now turned its fury on Europeans in recent weeks. Earlier this month, Iranian President Hassan Rouhani threatened European troops stationed in the Middle East. “Today, the American soldier is in danger, tomorrow the European soldier could be in danger,” the Iranian President warned in a televised address on January 16.

Iran’s behavior is shocking if one considers the extent to which the European powers, Germany and France in particular, have going in appeasing the regime since President Donald Trump withdrew the U.S. from the nuclear deal some two years ago.

The European and the EU leaders stuck firm to the deal despite the regime gunning down over a thousand Iranians who took to streets in protests that erupted mid-November. French President Emmanuel Marcon offered Tehran a generous loan of $15 billion to save the fledgling regime in the wake of tightening U.S. sanctions. Several Western European and Scandinavian countries have joined that German-backed Iran trading mechanism to bypass U.S. sanctions — more appropriately described by a senior U.S. Treasury official as a money-laundering and terrorism financing mechanism.

Iran isn’t satisfied with these efforts so far. Having squandered billions released under the Obama-Kerry deal on military buildup and on funding every Islamic terrorist group from Hamas to Hezbollah, the regime is now in severe financial trouble.

With U.S. sanctions stifling the regime’s ability to sell oil in the open market, its primary source of revenue, Tehran is finally turning on the European powers who have stood behind the nuclear deal despite Washington’s objections. Watching Iran stocking up on enriched uranium for a nuclear arsenal, even its staunchest backers in Berlin and Paris are beginning to abandon the meaningless nuclear deal.

Ditto. Too bad the rest of the world doesn’t implement some of the best ideas of America, like limited government, divided spheres of powers, checks and balances, and more.

Come to think of it, I wish America itself continued to implement those best ideas. The left wants no limitations on power. The only known alternative to limited government is unlimited government, the lusted-after goal of every tyrant.

I was going to say the same thing. Apparently they read the western press for tips.

The hard unvarnished truth is that people really are no created equal. The same applies to groups, races and even religious groups.

notamemberofanyorganizedpolicital in reply to JusticeDelivered. | January 30, 2020 at 12:46 pm

Don’t they have centuries of intermarrying relatives, otherwise know as inbreeding? (Same inbreeding that afflicts all the self-appointed Elitists and Globalists…)

JusticeDelivered in reply to notamemberofanyorganizedpolicital. | January 30, 2020 at 4:37 pm

Smart inbreeding can produce good results, often intermixed with some bad results. With an average IQ of 84, it seems unlikely that Iranians are smart enough to even try for good results, and clearly they did not get a good result.

Most certainly, paying homage to Muhammad 5 times a day did not do anything to improve their intelligence.

How long until the Iranian people kick the administration out? I’m getting impatient.

Yes. The Western civilization exercises its right to be racists against maniacs continually vowing to bring death and destruction to them. No nukes for you!

We may still have to give a nuke or to study as it goes critical.

Man, are we sure this guy didn’t grow up in the US?

He would fit in well with Obama or Jesse Jackson and similar race baiters.

The enemies of the west see the weakness festering within us, and they try to exploit it to destroy us.

POTUS is a genius in provoking the unhinged dead enders.

notice how the new deal to bring ‘Palestinians’ into a sane position OR fuggetaboutit in getting aid from US and gulf states.

So similar, the American Left and all the other enemies of the USA.

The way to deal with the Mullahs is one explosion at a time.

Really? Crying racism? He must be a Democrat. Yawn…

notamemberofanyorganizedpolicital in reply to MAJack. | January 30, 2020 at 1:01 pm

You mean like the 93%+ of Media people (2012 last time they would release the facts I think) and all the college administrations and teachers? (College Professors 95 Times More Likely to Donate to Democrats Than Republicans)

Why that’s Repression without Taxation (on the Oppressors) or Representation.

The EU has been non-stop kissing the Iranian…. democrat party donkey…

Allegations of diversity, huh. The Europe Union is under protest for committing a hate crime. Meanwhile, the Iranian regime and terrorist proxies have less flexibility.

Note that the Europeans have invoked the dispute resolution mechanism within JCPOA, rather than invoking the snapback mechanism that is built into the Security Council resolution that ratified it.

There is no need for the complaining party to offer any evidence, or submit to any sort of mediation or negotiation. Iran has to prove its innocence, rather than the accuser proving its guilt. And Trump could have invoked this on Jan-20-2017, bringing all the sanctions automatically back on Feb-19, but for some reason he chose not to.

And they want nuclear weapons. For one thing these deranged bastards cant even tell the radar signature difference between a airliner at 8k ft and a cruise missle. How long until some jihadist pushes the button and kills a couple million blue eyed devils? And why isnt Kerry-who served in VN-being prosecuted for treasonous behavior negotiating with them?