German Foreign Ministry: “Our goal remains to save the agreement.” 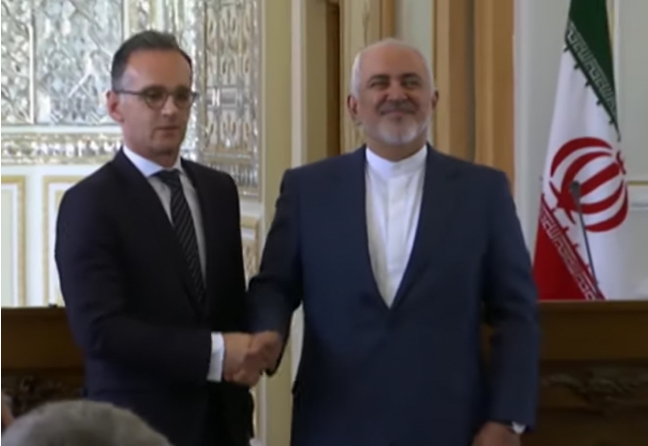 Amid Iran’s plans to enrich weapons-grade uranium, Germany has vowed to “save” the faltering nuclear deal, the German foreign ministry declared on Monday.

The German statement comes as Tehran refused to abide by the limits on enriching uranium put in place by the 2015 nuclear deal, Iranian state TV announced over the weekend.

Iran’s decision “could be the first step toward the end of this agreement, which would be a great loss,” German Foreign Minister Heiko Maas said.

Maas offered direct talks with Iran after a U.S. drone strike took out Qassem Soleimani, the chief of Iran’s elite Quds Force. Soleimani was behind the recent storming of the U.S. embassy in Baghdad and was directly responsible for the killing of hundreds of American servicemen and women stationed in Iraq.

While Germany desperately wants to keep the fiction alive of talking the Mullahs out of developing a nuclear arsenal, the European Union has come to terms with reality.

“The deal is all but dead,” news agency Reuters reported on quoting an EU diplomat.

In a last-ditch effort, German Chancellor Angela Merkel is teaming up with Russian President Vladimir Putin to rescue the Obama-era pact. She will hold a meeting with Putin at the Kremlin over the weekend, German newspapers confirm.

“Germany and Russia are two of the world powers which have been trying to salvage the 2015 nuclear deal with Iran after US President Donald Trump withdrew from the agreement in 2018,” German state broadcaster Deutsche Welle reported on Monday.

Germany still wants to save Iran’s 2015 nuclear deal with six major powers say despite Tehran’s announcement on Sunday that it would abandon limitations on enriching uranium, a German Foreign Ministry spokesman said on Monday.

“That would be a further breach of the JCPoA (Joint Comprehensive Plan of Action) but not – I want to stress that – automatically the end of the agreement,” the spokesman told a regular government news conference.

“Our goal remains to save the agreement. We are in talks on that,” he added.

Billions of dollars released as part of the Obama-Kerry nuclear deal financed Iran’s military build-up in the region. It bolstered the regime’s funding for the Lebanon-based Shi’a terrorist militia Hezbollah, the Gaza-based Islamist Hamas, and other proxy terror groups.

Besides financing international terrorism, the deal failed to achieve any of its principal stated goals. The agreement signed four years ago didn’t prevent Iran from developing its nuclear missile program. The Islamic Republic has been perfecting the ballistic missile systems capable of carrying nuclear warheads up to a long-range, the U.S. intelligence confirmed.

Chancellor Merkel’s government has fallen hook, line, and sinker for the Iranian ‘taqiyya’ tactics, the Islamic doctrine on deception during jihad warfare. Instead of acting on its intelligence assessment, Berlin has relied on false promises offered by the Islamic Republic. In June 2019, Iranian Foreign Minister Javad Zarif proclaimed that his regime would never build a nuclear arsenal because Islam forbade such weapons. It’s worth noting that Chancellor Merkel is merely following in the footsteps of President Obama. The former U.S. president had sold the 2015 deal citing an Iranian fatwa, the Islamic religious ruling.

Germany and other Western governments have repeatedly downplayed the reports of Iranian violations in hopes of keeping the regime within the deal’s framework. Iranian compliance, on the other hand, has been nothing more than a fiction. In its latest annual report, the German domestic intelligence service found a “clear rise in evidence” that Tehran has been working to acquire technical capabilities to enhance its nuclear weapons delivery systems. These revelations follow a series of similar warnings issued by German and other Western intelligence agencies since the signing of the deal.

Iranian lawmakers chant ‘Death to America’ in the national parliament.

One muslim country allied with another, I guess.

Germany has always allied itself with Jew Haters.

That is one reason you will never hear German police shouting “raus! raus!” while herding muslims into trucks. The other is: they FEAR the muslim; Jews were docile. VERY docile. TOO docile!

Cut Iranian oil off, make germany suffer for that dependence.

The good news is Germany does not have nuclear weaponry. They’re about as powerful as the military of Upper Volta.

They are only economic players now, and being we don’t need their trade, BUT they need our military and oil, we have merkel by her Stasi short hairs. Now: pull!

The new East Germany. As the EU continues to close nuclear power plants, they are enabling the biggest enemy to civilization to become a nuclear power. The “super race” on the rise again.

“Our goal remains to save the agreement.”

The real goal, keep the Iranians from exposing the bribed and keep sales rope up so the Iranians will have something to hang us all with.

The Germans are an enemy of freedom and liberty. Always have been.

Germany needs a leader with balls ASAP! First they got rid of their electric power companies for some pie in the sky green meme. Then they agreed to buy their petroleum from RUSSIA! Then they allow millions of muslims into their country and have watched it plummet downward in a criminal spiral. Now they want to make a deal with the world’s worst government on a deal that requires trust!
“Ich bin ein Berliner.” JFK was right. The germans are donuts!

Dear pandering Morons in Germany: There was no deal, It changes in Oct and this is nothing but ring kissing.

Iran’s decision “could be the first step toward the end of this agreement
Well, no. The first step was that Iran never intended to actually give anything up. The second step was Trump dumping it. This is third or fourth on the list.

Interesting the turn of fortunes. Germany is now run by Neville Chamberlain.

Obviously this is simply a cover for Germany’s and OBAMA’S hatred of Israel. While claiming to attempt Iran from securing nuclear weapons, Obama gave them startup money and Germany seeks to prop up the economy to keep the funds flowing. German leaders are still Nazi’s at heart.

Germany. Isn’t that the home of the original Nazis?

Except “Iran” is a distortion of “Aryan”. Mohammedans and Nazis go way back together in their hatred of the Jews. Mutual aid and admiration society. They even shared ideas on mass extermination of Jews.

The EU just became the Fourth Reich and took over Europe without a shot fired in anger (Pretty much like the Third Reich). Saw an ad on eBay recently for a French rifle: Never fired and only dropped once.

You know, if they *could* save the deal, convince Iran to stop trying so hard to get nuclear weapons and ballistic missiles, and to stop exporting terrorism…

Side note: Stampede kills 56 at funeral for Iranian

Wonder if any German officials were in this crowd.

The Friendly Grizzly in reply to notamemberofanyorganizedpolicital. | January 7, 2020 at 12:56 pm

To answer your question: no such luck.

The nuclear agreement guaranteed that Iran would obtain nuclear tipped ICBMs. This is the worst possible outcome for the world and proof that Obama was the first antiAmerica president.

With the stockpile of slightly enriched uranium, they can start rolling out bombs in 12 to 18 months, easy.

Yes, but… A uranium bomb has the advantage of simplicity, as in it is merely two subcritical lumps of U smacked together (gun type), but it is HEAVY. Iran’s goal is nukes on missiles, so they are wanting Plutonium bombs (implosion type). To go from enriched Uranium to Plutonium requires a breeder reactor, which *can* be done small scale if they’re only going to get small amounts of Pu. They’ve taken a couple of tries at this, which were blown up before they could be fueled, but I’d bet there’s a couple more being built or already built just waiting on fuel.

The real international incident will happen if we can’t find the breeder reactor *before* it is fueled, and we crack the casing with a few thousand pound bombs, scattering glow in the dark crap over large sections of Iran.

“…scattering glow in the dark crap over large sections of Iran.”

This is know as a feature…

You don’t need a breeder reactor to transmute U238 into Pu239. Any old reactor which can bombard U238 with relatively low-energy neutrons can do it.

Why do people act like anyone in Europe is actually folled by yhte Iranians.

Face the truth people. These people want to support Iran because Iran can take out Israel and they hate ISrael and love Muslims.

When will people just admit that the leaders of Europe want to embrace Islam and reject Judeo-Christianity?

Surprising how fast the world went to hell in a hand basket.

Not all that quickly. It’s taken Islam nearly fourteen centuries to get to where it is now, and is only dangerous because it’s coincided with the rise of a particularly enervating strain of liberalism which makes willing victims of what were once formidable adversaries.

But it’s not that hard to fight. The job just needs leadership.

DJT is a leader.

So, how are we going to relieve France of their nukes? That is a disaster waiting to happen, we need to stop French Muslims from gaining control of those nukes.

The reason the EU and Germany were and are such ardent supporters of the ‘Deal’ is access to Iranian markets for Airbus and the other state controlled industrial concerns. All about the Euros.

Remarkably, Germany learned nothing from the lessons given by Nazis. They continue to aspire to control the world and yet, still have no natural resources to accomplish that goal. They’ve had a long-standing alliance with Islam, both during and after WWII, as they had a common goal to destroy Israel at all cost. Evidently, unrelenting hatred takes more than 4 generations to eradicate… If the EU (Fourth Reich) is involved (guaranteed), then it’s indeed all about the Euros.

This just proves my theory that having finally won WW2 through domination of the EU, the Germans are using Muslims to complete the Final Solution.