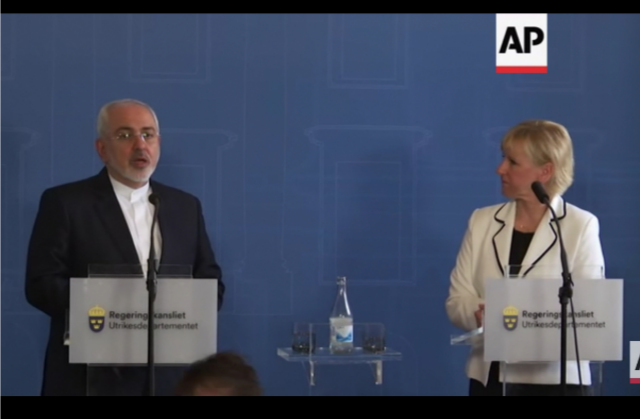 Six European countries have joined the European payment mechanism which seeks to bypass U.S. sanctions against Iran. “Belgium, Denmark, Finland, the Netherlands, Norway and Sweden are in the process of becoming shareholders of the Instrument in Support of Trade Exchanges (Instex),” the Government of Norway said in a statement on Friday.

The Instex (short for “Instrument in Support of Trade Exchanges), backed by Germany, France, and the United Kingdom—the three European signatories to the 2015 Iran nuclear deal, is based on barter transactions which do away with the incriminating money trail and thus shields the European state and private players who are filtering support to Tehran despite U.S. sanctions. According to Germany’s state-owned DW News, Instex “works as a barter arrangement operating outside of the US-dominated global financial system.” The mechanism “acts as a sort of euro-denominated clearing house for Iran to conduct trade with European companies,” the broadcaster explains.

A statement issued by the Norwegian government confirmed the entry of new members to the trading mechanism:

Belgium, Denmark, Finland, the Netherlands, Norway and Sweden attach the utmost importance to the preservation and full implementation of the Joint Comprehensive Plan of Action (JCPoA) on Iran’s nuclear programme by all parties involved. The nuclear agreement was unanimously endorsed by the UN Security Council and is a key instrument for the global non-proliferation regime and a major contribution to stability in the region.

In light of the continuous European support for the agreement and the ongoing efforts to implement the economic part of it and to facilitate legitimate trade between Europe and Iran, we are now in the process of becoming shareholders of the Instrument in Support of Trade Exchanges (Instex) subject to completion of national procedures. Instex was established by France, Germany and the United Kingdom in January 2019.

In this context, it is crucial for the Islamic Republic of Iran to return without delay to full compliance with the terms and provisions of the nuclear agreement.

Germany, France, and the United Kingdom “welcomed” the expansion of the Iran payment system.

Europe rewards Tehran financially at a time when the regime is conducting a deadly crackdown against civilians, gunning down hundreds of unarmed protesters in the past two weeks. The nationwide uprising, which began on November 15 after the regime rationed gasoline and hiked fuel prices sharply, is seen as a success for President Donald Trump’s policy of “maximum pressure” on Tehran.

European powers have been trying to save the Shi’a Islamic regime from the brink of economic bankruptcy. French President Emmanuel Macron offered $15 billion in credit to Tehran. The expansion of the Iran trading mechanism will bolster the fledgling regime.

Germany’s Ministry of Foreign Affairs released a statement on Saturday lauding the move:

As founding shareholders of the Instrument in Support of Trade Exchanges (INSTEX), France, Germany and the United Kingdom warmly welcome the decision taken by the governments of Belgium, Denmark, Finland, the Netherlands, Norway and Sweden, to join INSTEX as shareholders. This step further strengthens INSTEX and demonstrates European efforts to facilitate legitimate trade between Europe and Iran and is a clear expression of our continuing commitment to the Joint Comprehensive Plan of Action (JCPoA).

U.S. Ambassador to Germany, Richard Grenell, slammed the Norwegian envoy to Iran Lars Nordrum on Friday for praising the rogue payment system. “Terrible timing – why fund the Iranian regime while it’s killing the Iranian people and shutting off the Internet?” Ambassador Grenell tweeted on Friday. “You should be standing for human rights not funding the abusers.”

Terrible timing – why fund the Iranian regime while its killing the Iranian people and shutting off the internet? You should be standing for human rights not funding the abusers. https://t.co/LKS37nIu1I

Washington seems committed to countering the European payment system, which it sees as a mechanism for money laundering. The money flowing to Iran under the mechanism will inadvertently go towards funding international terrorism, President Donald Trump’s administration maintains.

Tehran remains the world’s biggest sponsor and exporter of Islamic terrorism, the recent data compiled by the U.S. State Department confirms. The regime funnels around $1 billion dollars each year to “support terrorist groups that serve as its proxies and expand its malign influence across the globe,” the State Department’s “Country Report on Terrorism” release last month disclosed. If the European payment mechanism rakes in revenue, it will be directly funding terrorist outfits like Iran’s Islamic Revolutionary Guard Corps (IRGC), a designated terror group, which profits from the country’s oil, banking, and other sectors of economy.

What the world wide, as in foreign and domestic, corruptocrats are doing is WAY PAST just despising them !

You only noticed now. No. You were OK with it as long as the money was rolling in. Pigs

Also: A number of European nations were big arms suppliers to Saddam Hussein and worked hard to circumvent embargos.
To paraphrase Glenn Reynolds of Instapundit, I don’t want to hear one d*mn word from Europeans about morality.

POTUS needs to tell our so called allies that either support our efforts or we will leave EU to defend itself !!!!!

“The money flowing to Iran under the mechanism will inadvertently go towards funding international terrorism, President Donald Trump’s administration maintains.”

PDJT has a long memory….Tariffs on EU cars, trucks and buses after the 2020 elections.

Sweden and Norway are supporting the terrorist Islamo-fascist Iranian regime, the United States should boycott the Nobel Prizes until the Scandinavians support peace and freedom.

I’d like to see Bruce Bawer’s take, since he lives in Norway.

The legal tools exist under US law to cripple Instex; the question is whether there is actually any need for the Administration to exert overt pressure on our upon putative “allies” who are propping up Iran for their own profit or whether the US sanctions are sufficient to collapse the Iranian economy regardless of Instex.

Well now . . . if the US decides that most of Europe is on the wrong side, it can pull out of the Old World entirely and leave Europe defenseless against the Russians. After Vlad moves in, he can take care of the Muslim invasion in a way the Euroweenies can’t manage themselves. So they’ll be subjugated to Russia, and not the Caliphate. Not the best way for it all to turn out, but far from the worst.

Of course this plan is a bit tough on Poland, Hungary, et al; certainly a serious drawback.

Instex “works as a barter arrangement operating outside of the US-dominated global financial system.”

We never should have compromised our sovereignty, monetarily or otherwise.

The answer to Mr. Grenell’s question is that the Europeans don’t give a RASS for the lives of Iranis or anyone else other than themselves. All they care about is what they can get out of other people. They have no principals or beliefs other than their lives (especially those of their elites) should be easy and trouble free and that the peons must bow before them. I’m sure there are some European individuals meriting respect, but as a general rule they are selfish jokes. Unfortunately, these selfish jokes have a history of getting other people killed.

Try a broader brush. How about everyone in the Eastern and Southern hemispheres?

1. China is worse and we aren’t boycotting or sanctioning them. Maybe we need the transplant tourism organs.

2. Instex is expanding faster than NATO!

3. If we have allies, perhaps we should insure they are going to follow us when we change our ship’s direction.

4. We are big friends with the Saudis (almost all of the 9/11 terrorists), especially their leader, Moe Bone-Saw-man. They still oppress women, behead heretics, throw gays off roofs… but no sanctions here!

We aren’t against hypocrisy, only we don’t like their version of hypocrisy!

“China is worse and we aren’t…”

Geez tz, where have you been the last three years?

China may be more of a long term threat, but they haven’t threatened to exterminate us and Iran has.

How can the Europeans still support the nuclear deal that guarantees Iran will obtain nuclear tipped ICBMs? Are they forgetting that Iran has already violated the agreement by lying about the status of their nuclear program?

Since Instex is basically a money laundering scheme, I wonder what personal benefit the politicians pushing it get.

I also wonder whether Hillary personally benefited from the hundreds of millions of dollars that went “missing” from the State Department budget. A thorough forensic accounting should have been ordered, but mysteriously wasn’t. Billions went unaccounted for in the Pentagon budget. And of course I wonder how much Obama benefited from all this missing money under his watch.

There are lot of financial interests at play in Europe when it comes to Iran deal. I have written about it in past. Perhaps it’s time to highlight it again.

notamemberofanyorganizedpolicital in reply to randian. | December 2, 2019 at 1:31 pm

Methinks “the hundreds of millions of dollars that went “missing” from the State Department budget” where next to Hilary’s illegal bathroom computer server. You know, the one she never wipes.

Iran has directly threatened the USA and Israel, yet our so called allies seem determined to undermine the USA. The next time Europe faces danger, don’t look to us for support.