She’s even fake when trying to be natural 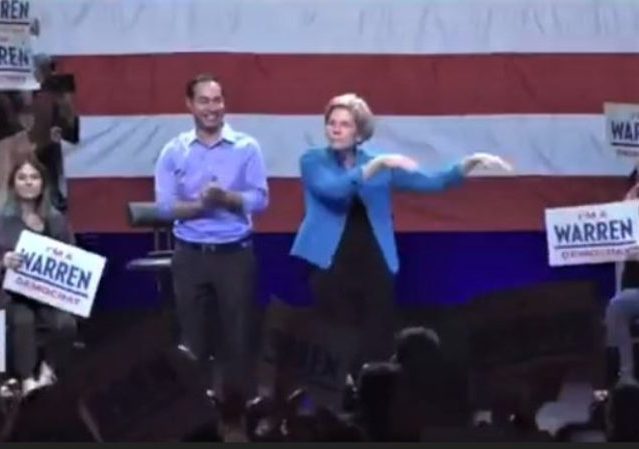 Sen. Elizabeth Warren (D-MA) is struggling in her bid for the Democrat nomination for president.  Her poll numbers and fundraising are nosediving.  Her response? Let’s dance!

At a campaign stop Thursday, Warren got her groove on.

I know your terrible advisers told you to be more relatable and dance but really the trick is just being your authentic self. No more no less @ewarren pic.twitter.com/iNSagQhqZH

The cringeworthy dance moves quickly earned wide-spread mockery on social media, much of it from the Bernie-supporting far left.

Elizabeth Warren: "We are on the brink of war with Iran."

Also Elizabeth Warren: *dances like she's the Indian from the Village People* https://t.co/zXDztUFKJx

The left has to left, so of course Sen. Cory Booker (D-NJ) hopped on the sexism bandwagon to defend Warren.

Raise your hand if you know why people are trolling Elizabeth's dance moves and not my dad jokes https://t.co/SUsyIQDlPZ

Progressive self-described YouTuber Kyle Kulinski responded to the implied accusation, insisting that his trolling of Warren about her strange dance moves is about policy, not sexism.  (We won’t tell him how that argument plays out with the extremist left. He’ll find out all on his own.)

Progressive commentator Kyle Kulinski trolled Elizabeth Warren on Wednesday for the dances moves she recently busted out on the campaign trail. In response, Democratic presidential candidate Cory Booker appeared to imply that Kulinski’s attack on the Massachusetts senator was rooted in sexism.

. . . . “And while we’re on the topic. My reason for not supporting Warren in the primary (f*cking obviously) has nothing to do with her super goofy dance. It’s completely policy based & strategy based.

. . . . Progressive commentator and The Hill’s Rising co-host Krystal Ball defended Kulinski, claiming that his mockery is “equally applied across gender and race.” Her co-host, Saagar Enjeti, opted instead to troll Booker, appearing to suggest that he was aiming to gain a position on Warren’s 2020 ticket as vice president.

Kulinski posted examples of his previous trolling of Booker’s dad jokes as well as Mayor Pete Buttigieg’s dance to Twitter. He also took the chance to plug one of the episodes of his eponymous show in which he explains his reasoning behind supporting Vermont Sen. Bernie Sanders over Warren.

It's sad enough when a sitting US Senator starts shit with a youtuber, it's even sadder when he gets rekt. https://t.co/nxHt5it8Vs

For some reason Warren didn’t learn her lesson about trying to fake looking real with her infamous beer-drinking video.

As if that wasn’t bad enough, she’s also playing Dear Abby for teenagers.

You deserve better. Dump the guy who ghosted you, convince the roommate to let you adopt a dog, and I'll take care of canceling your student loan debt! https://t.co/YIMb9o1Y8P

notamemberofanyorganizedpolicital in reply to utroukx. | January 9, 2020 at 7:14 pm

Just look at Elaine on Seinfeld.

This elderly socialist 1/1000 Indian is not playing with a full deck.

notamemberofanyorganizedpolicital in reply to dystopia. | January 9, 2020 at 7:16 pm

I’m sure you are correct in that, however up until now
I thought Lizzie was playing with a “MARKED DECK!” LoL

In the immortal words of Howard Dean – “ROARRRRR”

She has the Bernie limp wrist look down.
She is so phony, how could anyone really support this turkey? Phony intellectual, phony Indian, phony beer drinker, phony candidate… why would you support this … this… thing?

I wonder if Warren also gives lessons on drinking beer from a bottle.

You know what they say. The cheekbones are the first to go downhill. Then everything else collapses soon after.

That dance move is clearly the ‘Cherokee Cha Cha Cha’.

You can’t really expect an Indian to dance well without a drum beat!

notamemberofanyorganizedpolicital in reply to locomotivebreath1901. | January 9, 2020 at 7:17 pm

Then “show business” must be politics for…..

Dear Eli: My three week old identity privileged cismale baby routinely demands a teat – and when I refuse – he tries to guilt me by wailing and crying.

From: The Patriarchy Sucks

She borrowed her Indian identity from family folklore; borrowed the beer in the kitchen schtick from AOC; now borrowing dance moves from MO and EllenD?

Makes me wonder if’n she were made to return everything she’s borrowed, if there’d be anything left of her?

notamemberofanyorganizedpolicital in reply to MrE. | January 9, 2020 at 7:43 pm

Eddie Murphy portraying Buckwheat back when SNL was still funny.

OT
Rose Rosenstein named as lead defendant in lawsuit by Sharyl Atkinson re illegal spying on her and her family. Now I am going to make a wild guess re “umasking” and FISA Warrants.
https://www.zerohedge.com/political/new-lawsuit-claims-rod-rosenstein-led-task-force-spied-sharyl-attkissons-computer

When a reporter asked what that was all about, Elizabeth replied, “I dance for wampum. As lady Gaga said, that’s money honey.”

Regarding that guy with no life YouTuber – is there anything more funny than leftist twits not understanding why they’re attacked by more extremist leftist twits?

These people are so stupid.

Yes, they seem to be. But very entertaining.

I’m not even going to throw shade at him. I’m just going to enjoy the impending and repeated civil wars between the woke left and the more woke left as they infinitely split over and over again into smaller and smaller tribal outrage factions.

That said, the hypocrisy is staggering.

How many of those same anti-misogyny warriors have thrown shade at Trump for his looks or what he does? If you are a public figure you get mocked and criticized, it’s what America does…to everyone. No special interest groups are exempted despite all of the nauseating attempts at virtue signaling and shaming.

“That said, the hypocrisy is staggering….”

That matters only when they hypocrite and his/her/its peers have a sense of shame.

Kyle Kulinski responded to the implied accusation, insisting that his trolling of Warren about her strange dance moves is about policy, not sexism.

All right, how can lousy dance moves be a matter of policy? Not even the Central Committee of the Borg Collective would go that far. (Although, to be historically fair, while Washington’s unpaid troops were shivering their credentials off at Valley Forge, the Continental Congress spent the winter debating whether dancing should be made illegal. American congresses have always lived in their own little worlds.)

I think his point is that he doesn’t like her policies and that it extends to everything she does. It’s really not unlike my gleeful mockery of Obama for his “corpse-man” thing or his visiting 57 states or his #ObamaDogRecipes. Once you dislike the policy, it’s easy to mock the person behind it.

We all did it with Obama and still do it with AOC plus three, and et al. It’s not sexism, racism, or anything but disliking policy and trying to make the person behind it look as ridiculous and unserious as their policy positions.

Did she try the fake Southern accent already?

notamemberofanyorganizedpolicital in reply to Exiliado. | January 9, 2020 at 8:34 pm

Lizzie was meeting with Hilary remember.

But Hilary is Chicago born and raised…….

If I wanted to see a 70 something dance I’d visit one of Anchorage’s or Fairbanks’ seedier topless bars.

A friend of mine and I had just arrived in Anchorage from Japan en route deer hunting on Kodiak but we had to lay over for a day to pick up rifles.

My friend had worked as a BLM (Bureau of Land Management, not #BlackLivesMatter) surveyor before joining the Navy.

One of his BLM surveyor buddies had just gotten back into town after 6 months in the bush. With only 1 other hairy stinking surveyor for company. So we hit the worst dives in town and OMG! I couldn’t eat for a week.

I hoped never to relive the experience. But there’s Warren on stage trying to bust a move. The cold sweats start as I have the flashbacks. I suppress the urge to shout “Put it on! Put it back on! In the name of all that is holy put it back on!”

Sure she hadn’t started to strip off yet. But I was reliving a trauma. And, let’s face it. If her consultants told her that’s what she had to do to get votes you know she’d do it.

Sailors in seedy bars? Now that is a new one.

I live in Massachusetts and am horribly ashamed of Elizabeth Warren, Disco Markey, the spectacle of any Kennedy and some moonbat Muslim witch that does not look live Elvis.

Congress is just about overrun with ugly cretins, sure wish we had mandatory term limits to get rid of them.

Dukakis had his tank picture.
Kerry had the bunny suit picture.
Now this.

Massachusetts must have the dumbest political handlers in the universe.

notamemberofanyorganizedpolicital in reply to Oversoul Of Dusk. | January 10, 2020 at 1:58 pm

Just could not resist.

Bunny John Kerry reporting to the Iranians ( in their favorite position too).

Desperation isn’t an attractive color on anybody.

notamemberofanyorganizedpolicital in reply to Olinser. | January 10, 2020 at 1:58 pm

But it coordinates so well with their purple.

Maybe she can re invent herself as a Dot Indian.

Underrated zinger that deserves more than one upthumb.

OMG!!! I couldn’t force myself to read the story. Elizabeth Warren’s dating advice? Give me a break!

I’m old, born in what came to be the last year of the FDR administration. [As if they didn’t know they were signed on to elect a walking dead man.] I’ve seen some strange strange things in the ensuing years, but candidates acting like this clown-car of politicians is beyond the limit….

I didn’t vote for PDJT; I figured he would be finished at the Iowa caucuses (or is it “caucai”?) but I was wrong… I liked Carly, if for no other reason than the debates between her and Failed Democrat Presidential Candidate Hillary Clinton would have been classic. I’ve come to like his approach to all this. I admit to being a bare-knuckled, tell it like it is, kinda guy, so watching all this is great. PDJT has my vote, even if he nukes Tehran between now and November..

What’s she gonna do next for attention, finger herself on stage, a la that pig miley cyrus?

Don’t put it past her.

Warren has been cringe worthy since her election as my Senator.