“When progressives fight each other, the establishment wins” 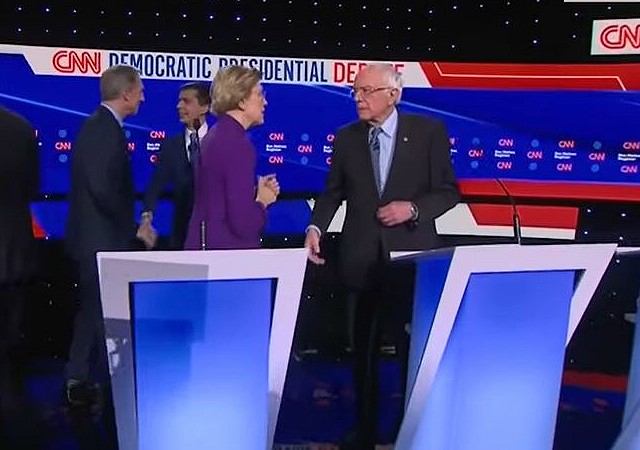 Up until recently, all of the 2020 Democratic candidates have been trying very hard to keep their political attacks focused on Trump instead of each other. Things changed at the debate on Tuesday night when Elizabeth Warren and CNN went after Bernie Sanders.

Sanders supporters who might have warmed to Warren if she gets the nomination were rightly furious and even caused the hashtag #NeverWarren to trend on Twitter.

Progressive activists know this is going to hurt their cause next fall no matter who wins the Democrat nomination and are now in a mad dash to get their ranks back in line.

Jonathan Easley writes at The Hill:

Eighteen progressive groups have signed a unity pledge vowing to keep their fire trained on the “corporate wing” of the Democratic Party amid a burgeoning feud between Sens. Bernie Sanders (I-Vt.) and Elizabeth Warren (D-Mass.) that has split the left.

The signers include seven groups who back Sanders’s 2020 presidential bid and two that back Warren’s. The remaining nine groups are either supportive of both candidates, such as Democracy for America, or have not endorsed anyone yet.

The three-part pledge says the groups will “focus our fight for the nomination against candidates supported by the corporate wing, instead of fighting each other.” The groups say they’re committed to ensuring a progressive candidate wins the Democratic Party’s presidential nomination and that they’ll join forces to ensure that candidate ultimately defeats President Trump.

These groups are right to be concerned. If Sanders supporters sit out the 2020 election or defect to Trump, it could make a significant difference in the outcome.

David Siders of Politico has more:

Fearful of splintering the progressive vote, leaders of progressive groups have been talking about unity within the movement since last year. But recent tensions between Warren and Sanders elevated their sense of urgency…

The groups said in a prepared statement that they will ask members to sign onto a pledge to vote strategically for Sanders and Warren in their caucuses or primaries. They said that in Iowa the groups will be “working to ensure their members do not leave their Feb. 3 caucus site without casting their final vote for one of the top two progressives in the race.”

“When progressives fight each other, the establishment wins,” Charles Chamberlain, chairman of Democracy for America, said in a prepared statement. “We saw it in 2004 when progressives took each other out and John Kerry slipped through to win Iowa and then went on to lose in November to a very unpopular Republican incumbent. We’re determined to not let that happen again.”

Similarly, Alan Minsky and Donna Smith of the Progressive Democrats of America said that although their organization has endorsed Sanders, “we love Elizabeth Warren too.”

Under normal circumstances, this would likely be a natural rift to heal. This seems different for two reasons.

First, Sanders supporters are still stinging from the Democratic primary of 2016 when CNN was caught giving debate questions to Hillary Clinton ahead of time. Second, the nature of this dispute is not based on policy, but accusations of sexism and lying.

I fully agree with Professor Jacobson’s recent observation. This feud is not over.

“When progressives fight each other, the establishment wins,” Charles Chamberlain, chairman of Democracy for America, said in a prepared statement

Bernie and Warren are the Establishment.

Meh. This is a clash between two Communist Party satraps. It is like watching a fight for power between Konstantin Chernenko and Yuri Andropov: absolutely nothing changes except the name of the supreme leader of the Soviet Union.

Whoever emerges on top will still have all of the advantages of totalitarian power: solid control of almost all media outlets, massive voting fraud, corrupt Federal law enforcement, violent domestic terror groups acting as the Party’s street enforcers, lawless Federal judges, and a multi-billion dollar propaganda machine that would make Joseph Goebbels envious.

Leftists have no common ground as they all want to be dictator-in-chief. There unity only comes from having a common enemy — the devil DJT.

They will get along once they refocus on DJT. Watch.

“Hatred is the most accessible and comprehensive of all the unifying agents. Mass movements can rise and spread without belief in a god, but never without a belief in a devil.”
― Eric Hoffer, The True Believer: Thoughts on the Nature of Mass Movements

Less than 3 weeks to Iowa. Some frogs gotta jump

Well in some respects this had to happen eventually because in the end there can only be one nominee. Our best hope is that whoever the eventual Dem nominee is is that this infighting will give Trump plenty of ammunition for whoever he has to beat.

A search worth digging into folks.

Warren’s getting her PhD (Piled Higher and Deeper).

Elizabeth Warren Takes Credit for Sponsoring Bills She Voted Against

And it’s not Barrack’s “Muh Economy is stuck where my wand is stuck” either. Great Branco cartoon on that. https://pics.me.me/economy-trump-economy-is-roaring-maga-kag-31496484.png

The party of no gender arguing over which gender is most electable.