President Trump hopes to flush away even more EPA regulations

President Trump hopes to flush away even more EPA regulations

Trump: “Our regulatory reform efforts are delivering prosperity to forgotten men, women and children of America” 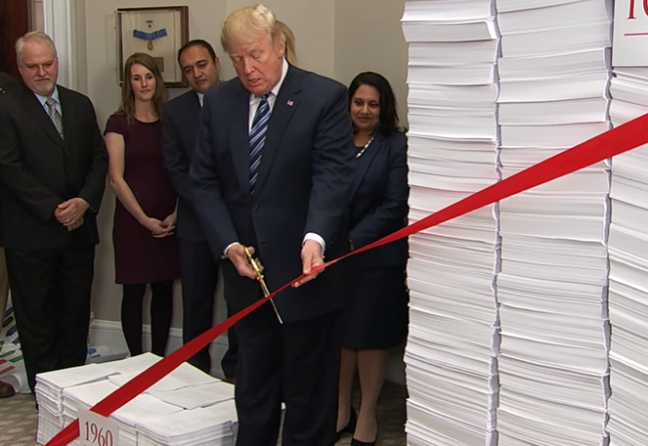 President Donald Trump hosted a small business roundtable at the White House Friday, explaining that he’d asked the Environmental Protection Agency to look into rolling back some more of their onerous regulations.

To begin with, Trump hopes to flush away some of the rules regarding toilets.

We have a situation where we’re looking very strongly at sinks and showers and other elements of bathrooms where you turn the faucet on, in areas where there’s tremendous amounts of water, where the water rushes out to sea because you could never handle it, and you don’t get any water. You turn on the faucet; you don’t get any water. They take a shower and water comes dripping out. It’s dripping out — very quietly dripping out,” he told reporters.

“You go into a new building or a new house or a new home, and they have standards, ‘Oh, you don’t get water.’ You can’t wash your hands, practically, there’s so little water comes out of the faucet. And the end result is you leave the faucet on and it takes you much longer to wash your hands. You end up using the same amount of water,” he continued.

“So we’re looking at, very seriously, at opening up the standard. And there may be some areas where we’ll go the other route — desert areas But for the most part, you have many states where they have so much water that it comes down — it’s called rain — that they don’t know, they don’t know what to do with it. So we’re going to be opening up that, I believe. And we’re looking at changing the standards very soon.”

The new bulb is many times more expensive and I hate to say it, it doesn’t make you look as good, of course, being a vain person that’s important to me,’ the president said. ‘It gives you an orange look, I don’t want an orange look.’

He was referring to energy-efficient lightbulbs which use LED or fluorescent technology – and which have a different color tone.

In conjunction with the meeting, the administration released a regulatory rollback report card, touting more than $50 billion in total savings.

“Our regulatory reform efforts are delivering prosperity to forgotten men, women and children of America,” Trump said at a White House meeting with Cabinet officials and small business owners. “We are seeing a middle-class boom.”

Since Trump took office, his administration has taken 392 total deregulatory actions and issued 53 economically significant regulations. That amounts to a ratio of 7.4 cuts for every big-ticket rule that has been added, and overall savings of $50.9 billion, according to the report. The emphasis on slashing bureaucratic red tape stems from Executive Order 13771, Trump’s directive requiring agencies to cut two rules for each new, economically significant one they issue, and to impose no new regulatory costs overall.

Given the excellent economic news recently released, you would think that all Americans would appreciate the success of Trump’s policies.

However, it seems one of the fastest ways to trigger a leftist is to put “Trump” and “EPA” in the same sentence. The activists on Twitter were quick to promote….#toiletgate!

Trump’s toilet rant is about explaining a bullshit reason he’s about to cut more regulations at the EPA. It’s not funny, it’s sad. Every time he comes out of left field with an idea, it’s because hes being paid or blackmailed to do it. He has no ideals or individual thoughts.

When you’re a president who’s full of sh*t, and 10-15 flushes aren’t enough to get rid of your adult diaper. #toiletgate pic.twitter.com/PPG72tY8sy

Those stacks of paper representing the regulations in 1960 versus now is a fantastic way to illustrate it.

It’s a miracle any Americans are left alive after all those “tons” of regulations crushing down on us.

Next, slashing the housing regulations that add tens and tens of thousands of needless costs onto housing.

Milhouse in reply to notamemberofanyorganizedpolicital. | December 7, 2019 at 7:56 pm

And the regulations in 1960 were nothing to be proud of.

I’ve remodeled a few bathrooms and kitchens and always remove or drill out the flow restriction devices – like the song from “Frozen” that goes “let it flow, let it flow …” 😉

I drill them out, too. Ever try rinsing shampoo out of a big beard with a flow restricted shower nozzle?

I can appreciate that 😉 Beards and me don’t mix tho’ – it comes in like a multi-colored cowlick that stretches from ear to ear. The one time I grew a beard someone said “For God’s sake man, pull up your pants!”

Seriously, a good hot shower or hand-washing has everything to do with an aching neck and back, and arthritis in my hands. Fortunately we’re on a well in the PNW.

I didn’t know you could do that.

Any money those flow-restrictors might have saved on your water bill will be eaten up and then some by the plumber you call to unclog your pipes, because you weren’t moving enough water through to keep them clear.

All this winning is so sweet!

Sometimes life deals you the right cards. In this case a royal flush.

Flush thrice toilets are about as popular as the 55 Mile Per Hour speed limit.

I really need to get AOC, the Squad, and the Democratic Candidates to call for a return to the “double nickle” speed limit.

I too remove the flow restrictors.

Let the left attack pets – they have a carbon footprint and use water too. There are working dogs, but then there are the children replacements.

Thank you, TZ. The pet-as-child-substitute makes me crazy.

One thing the Democrats do not want to admit is that regulations are used to favor certain vendors, as are contract terms. It is a bureaucratic way to force money to specific entities.

So, the net effect is to open up the market to other vendors and other products.

notamemberofanyorganizedpolicital in reply to Valerie. | December 7, 2019 at 5:40 pm

Exactly! Many regs are meant to keep extra bureaucrats, who vote and contribute Democrat, employed.

Many of those working for the agencies don’t know all the rules and few outside do either unless they have come up against them in enforcement.

This is an excellent order as a bureaucracy will always work towards maintaining itself as it’s first priority. Which is why they are so dangerous and even if they resist corruption just the burden alone will choke a nation.

less intrusive government is always a good thing. Hopefully, after 2020 we can work on the DEBT. The left doesn’t have time for the country’s business.

If he would just get rid of the CAFE (car fleet miles per gallon) requirements.

I’m so TIRED of econobox cars! THEY ALL LOOK THE SAME.

I’d kill for a 1990 Jaguar XJS with modern safety features!!!

I’m the same but for a 1965 AMC Ambassador convertible, or 1968 Plymouth Fury convertible.

I would like to see the CAFE standards euthanized as quickly as possible simply because it would make the roads safer.

The Left is all about control. All control, all the time. They know how to live your life better than you. Light bulbs, toilets, auto sizes, houses, airplanes,food, taxes. The Dems/Progs solution for everything is the same, more taxes, another government program. Yeah, it’ll work.

I’m not well read on history or politics; my wiring is geared more toward human behavior, relationships, spirituality, the arts, etc. That translates to a simplistic view of things, where I’ve often wondered what kind of world this would be if the culture were innovation and reward-based rather than punitive and threat (of punishment) based. The former breeds life, the latter death. Simplistic as it is, I tend to view the Democrats as peddlers of death – in more ways than one.

Surely the Trump Administration’s appointees could let each State’s citizens decide on water flow restrictions based on their State’s water situation (you know, actual Federalism in accordance with the Constitution and our Republic)!

If Democrat run states want to deprive their citizens of toilets and dishwashers from the past that actually work efficiently regardless of their water situation, no skin off most of our backs – let them wash their dishes before putting them in the ‘dishwasher’ and do multiple toilet flushes while polluting their environment with more chemical toilet cleaners, while taking long showers to rinse the Axe off.

Even Joe Bidet might agree, as long as the regs don’t disadvantage a Ukrainian Gas Company or Mastercard.

The flushed waste will have little pieces of obama in it. So hold your noses.

The SAME MORONS whining about him rolling back regulations are the SAME MORONS that spend hundreds of millions of dollars replacing urinals with ‘gender neutral’ restrooms.

Since Trump took office, his administration has taken 392 total deregulatory actions and issued 53 economically significant regulations. That amounts to a ratio of 7.4 cuts for every big-ticket rule that has been added,

It occurs to me that this seems similar to the ratio between things Trump does that I like versus things he does that I don’t. I’m still not a fan, but at this rate I expect to vote for him next time and like it.

And washing machines. We bought a water/energy saver Maytag washing machine about 10 years ago. It took 3 hours to wash a load. sometimes, in big items, it would come out with dry spots – you cannot tell me that even got cleaned (the heavy spin cycle not withstanding). Other items, specifically my little kids clothes, came out with stains still on them.

I had 4 kids and another on the way. I could not wait 3 hours to wash ONE load of clothes, not to mention the loads had to be smaller to get them clean. There was no way to soak the heavy soiled items for an hour or two before washing.

After a year, I listed it on KSL.com, and bought a Speed Queen. Very very happy with that.

so, get rid of this regulation also, please!

I’m not too up on current appliances. Was your Maytag one of those front loader types? Is the Speed Queen a tub type with an agitator? Or without?

Since Trump took office, his administration has taken 392 total deregulatory actions and issued 53 economically significant regulations. That amounts to a ratio of 7.4 cuts for every big-ticket rule that has been added,

I’ve hated low-flush toilets ever since I installed one in my basement twenty years ago. It takes two or three flushes to remove the waste and stays dirty all the time due to the small pool of water in the bowl. That said, I recently needed a taller toilet in my main bathroom and the only ones available are low flush. So I gritted my teeth and bought a Kohler Cimarron 1.28 gal flush toilet. I expected the worst but it’s the best toilet I’ve ever owned! Not only does it flush the waste down every time with a tiny bit of water, but it has a large reservoir in the bowl and stays clean. It also has some kind of miracle non-stick anti-bacterial coating in the bowl and hardly ever needs cleaning. I highly recommend the Kohler Cimarron.