Caveat: The number included over 40,000 jobs of returning General Motor workers after the strike ended. 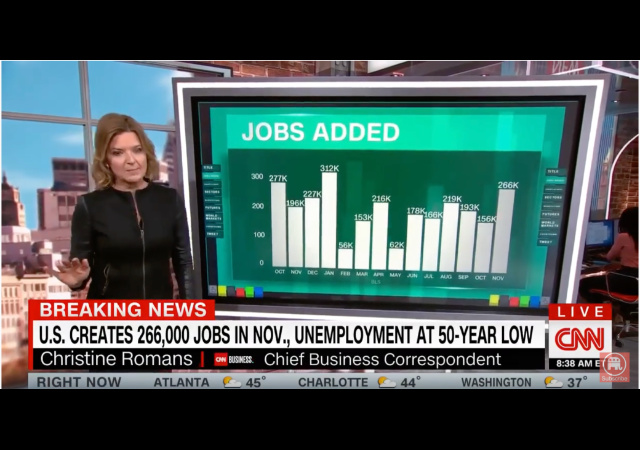 There is one caveat. The jobs report gained so many jobs due “to a reversal of the General Motors strike impact.” Economists believed this reversal would add 45,000 jobs. Overall, they expected 145,000 jobs in November.

The report showed General Motors added 41,300 jobs to the report.

Other sectors gained a handful of jobs:

A few sectors did not fare so well in the report:

The news was not all good. As the holiday shopping season accelerated, retail companies added just 2,000 net hires as gains in general merchandise of 22,000 and motor vehicle and parts dealers of 8,000 were offset by an 18,000 loss in clothing and clothing accessories.

However, in regards to retail, a lot of people shop online for Christmas presents.

Bloomberg Economists have lowered “its projection of the 2020 year-end unemployment rate to 3.3% from 3.4%.” Bloomberg also noted that the “[H]iring momentum continues to surpass the growth rate of the labor force, which is closer to 100k-125k per month.”

This will help President Donald Trump in 2020 because the voters will face “the lowest election day unemployment rate since Dwight Eisenhower won his first term as president in 1952.”

“However, in regards to retail, a lot of people shop online for Christmas presents.”

Also many people buy gift cards which don’t appear as sales until they are used, mostly in the following January.

Remember the doomsday predictions of the neverTrump crowd.

Remember the doomsday predictions of the no tariffs crowd.

notamemberofanyorganizedpolicital in reply to Barry. | December 7, 2019 at 3:30 pm

Turns out those forecasts where correct, but just not for
U.S.

“The Canadian election was held on October 21st, 2019. The central control government of Justin Trudeau would likely hold-back any negative economic information in an effort to support the ideology of the central government and maintain public opinion in advance of the voting. However, with the election over the economic books need to be reconciled.

I strongly suspect the Canadian November jobs report encompasses some of that state run reconciliation effort. Meaning the Canadian economy was in much worse shape in the months leading up to the election than state media were broadcasting. The reality is now catching up….

It is worth remembering that Canada does not allow competition in their media sector. The Canadian government considers the news media a protected “cultural industry”; and through a process of subsidizing broadcast all news media is essentially state run media.

“…voters will face “the lowest election day unemployment rate since Dwight Eisenhower won his first term as president in 1952.”

Bring back Operation Wetback from the Eisenhower days. Deport the invaders, and the numbers will get even better.

notamemberofanyorganizedpolicital in reply to Redneck Law. | December 7, 2019 at 3:55 pm

One of the Universe’s greatest oxymorons…..

RE: Democrat members of the Intelligence Committee.

At face value analysis by Zandi and all the brilliant minds at Moody’s Analytics predicted that by 2020 the unemployment rate would be 6.8% based on then candidate Trump’s economic plan. This was assuming Trump would do all the things he actually did. Hey, they were close – NOT!
.
WINNING!!!

notamemberofanyorganizedpolicital in reply to DanJ1. | December 7, 2019 at 4:01 pm

G I’m so shocked that previous months keep getting quietly revised upwards after being lowballed the first time. And if you want to say that 40,000 jobs were added because of that strike and those were subtracted from a previous one basically so…

Considering that I can’t remember a single month under Obama where the employment numbers were revised *up* after the fact. It was all “Look at the fantastic economy! We gained fifty jobs nationwide! Um… Oh, and last month we actually lost a few thousand, but ignore that.”

“…Other sectors gained a handful of jobs:”

For some reason the CNN infobabe doesn’t look too enthused with these numbers. Huh, wonder why?

notamemberofanyorganizedpolicital in reply to TrickyRicky. | December 6, 2019 at 5:02 pm

She just got a pink slip for a MSM Xmas?

Indeed, the more time they waste on show trials, the less time they have to pass truly damaging legislation.

The real reason that the Dems are trying to get rid of Pres. Trump is that his three years in office completely overcomes Obama’s eight years.

Trump has proven that Obama’s claim that we must get used to high unemployment is false. it was Obama’s way to justify his ant-business regulations. Obama intended to destroy our economy. Hillary would have sealed it.

Question for the attentive viewer: In that 1:23 clip what word – or name – is not mentioned once?

I didn’t even watch it….but let me guess….Trump?

Cheer up. Recession is just around the corner.

Of course right now the MSM/DNC axis is gearing up the tried-and-true Worst Economy Since The Great Depression (TM) shtick they love to use when a Republican President is running for the-election.

Not only that, but prior months were revised upward. Oh, and that 3.5% unemployment rate? It’s seasonally adjusted, which screened out the addition of holiday temporaries. The unadjustment rate was 3.2%.

Any way you slice it, this was really a blowout number. The only thing the mainstream media could do was try their best to ignore it and continue the impeachment dance. The recession dreams will not be realized. The yield curve is no longer inverted, and the intenals of the stock market show nothing but blue skies ahead.

I’ve expected Trump’s manner, or more to the point his lack of manners, to significantly attenuate his victory margin next year, but now I’m not so sure. Impeachment is a foregone conclusion, and McConnell is going to use that to maximum partisan advantage. The Democrats are in growing disarray, and there’s an increased chance of an actual landslide.

It’s still 11 months, and a whole lot can happen, but I sure wouldn’t want to be in the Democrats’ shoes right now.

“or more to the point his lack of manners”

For the LI reader I shall interpret:

notamemberofanyorganizedpolicital in reply to Barry. | December 7, 2019 at 4:05 pm

Unlike Peter Paul Buttigieg and Obama……..

Bad news for the fascist left.

Too bad obama used the ‘magic wand’ for self-pleasuring instead of using it to get jobs back to America.