Elizabeth Warren: “I plan to be the last American president to be elected by the Electoral College”

Elizabeth Warren: “I plan to be the last American president to be elected by the Electoral College”

Warren continues: “I want my second term to be elected by direct vote” 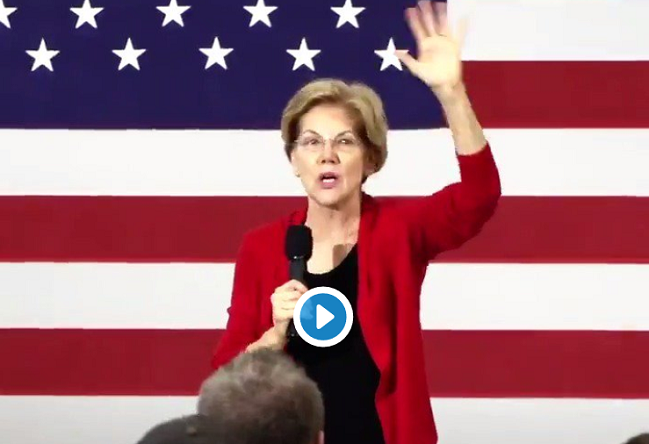 Perhaps attempting to distract from her tanking poll numbers and Medicare for All disaster, Sen. Elizabeth Warren (D-MA) is again calling for an end to the Electoral College. She floated this non-starter back in March.

She claims that after she wins, she wants to win her second term by popular vote.

My goal is to get elected—but I plan to be the last American president to be elected by the Electoral College. I want my second term to be elected by direct vote. pic.twitter.com/a2Lj2a9F0F

Sen. Elizabeth Warren (D-MA) isn’t even the frontrunner for the 2020 Democratic presidential nomination, but she’s already looking forward to running for her second term as president — a term, she hopes, she’ll win by popular vote after she eliminates the Electoral College.

. . . . At a stop in Waterloo, Iowa, Warren waxed poetic about her first term in office as President Warren, and suggested that among her top priorities is a rewrite of the Constitution, eliminating the Electoral College and replacing it with a popular vote.

The Electoral College is established by our Constitution, so she can’t get rid of it with a pen and a phone.  Instead, she would have to get a Constitutional Amendment passed by supermajority in both Houses of Congress and passed by three-fourths of states.

Alternately, a constitutional convention could be called by the states.  Neither scenario is going to happen; the latter never has.

The Electoral College is spelled out in the Constitution, so the Constitution would need to be amended, a process that requires the assent of two-thirds of the U.S. House of Representatives, two-thirds of the Senate, and three-fourths of the states. Although that’s happened before (and with some regularity) it hasn’t happened in decades, and with an increasingly polarized electorate — particularly one that feels the change is only “necessary” because Hillary Clinton lost the Electoral but not the popular vote — it’s unlikely to happen any time soon.

The states themselves could elimate [sic] the Electoral College by agreeing not to send electors — and some did just that in the wake of the 2016 presidential election — but, and perhaps this is the most deeply ironic problem for Warren, states like Iowa, who don’t have the kind of population that would make them relevant in a national popular vote, probably wouldn’t agree to a system that wipes out their voice in elections.

The POTUS literally has zero say in the process to eliminate the Electoral College. If your goal is to help push through a bunch of moronic constitutional amendments, you should stay in the Senate. https://t.co/1IxE2od4Va

Under this system, candidates would spend their time almost exclusicely in NY, CA, TX, and FL. Why would they bother caring what voters in IA or ND think? This idea is crap, and you should do some long thinking about why this is a terrible idea. https://t.co/SdkyThSg5v

Actucally @notaxation is correct. The electorial college was created in order to avoid rulership by the urban centers of America.

Politicians would only visit big cities if it was merely a popular vote. Electorial college forces politicians to campaign in rural areas.

Democrats are still on tilt after losing 2016, and the Electoral College has been on their radar again as a result.  They likely can’t win on the New Green Deal, Medicare for All, abolishing ICE, open borders, “free” everything, and the grab bag of lunacy they are currently running on . . . as long as the Electoral College is in place.

For her part, Warren is desperate to get some media attention that doesn’t involve her fumbling on Medicare for All or her horrific nosedive in both Iowa and national polls.

notamemberofanyorganizedpolicital in reply to RichieD.. | December 2, 2019 at 6:35 pm

She heap P.O.ed, and explains why she do this.

That is not the linked article I pasted into that last comment!

Lizzie Warren before she re-invented herself as a professional Indian.

Screaming Squaw can’t even make a spike in AR sales.

I love the smell of desperation in the morning (ok… evening).

I’m sure the flyover states are just lining up to sign off on that constitutional amendment. She smoke’em one too many peace pipe.

Yea – gonna be a breeze to get 34 states to ratify that.

38 states (>75%) would be required to ratify under Article V. But as a poster below warns, a con-con could change all of that.

What makes you think she’d try to make this change via constitutional amendment? Dems excel at thinking outside the box.

Do you see the dangers of a con-con?

Everything protection we now have, and the EC is one of the more important ones for all of us but especially for the citizens of the smaller states, would be up for grabs.

Do you really think that we would have First Am after a con-con. Or a Second Am? Or the EC?

The left lusts for a con-con because they could accomplish in a broad sweep what would take years if done by single amendments proposed by Congress (which is the way it’s been done up to this point).

At the moment there are 28 live con-con applications. 34 is the target.

No matter what gets proposed by a constitutional convention, it doesn’t become an amendment until it’s passed by three-quarters of the states.

You might think that we have a fail-safe in that provision, but there’s historical precedent that the con-con could change the threshold for ratification. Under the 1777 Articles of Confederation those articles could only be amended with unanimous consent of all thirteen states. But the 1787 convention, ON ITS OWN, declared that the new constitution would be declared ratified and operative with the consent of nine states. So much for the fail-safe of the 1777 Articles.

The “runaway convention” argument is patently absurd. All of the state bills calling for the convention lay out the parameters of what the convention is to cover. They can’t proffer amendments that fall outside of that scope. Then each amendment must be passed by 2/3 of the states. All these stupid fucking jbs lies have been thoroughly and repeatedly fisked at conventionofstates.org

Except the 1787 convention was itself a bit of a runaway. Not entirely since only the delegates of two states (MA, NY) were somewhat restricted. Delegates of the other ten states (RI never sent delegates) had more liberal instructions to consider the then political system.

The point remains that it’s possible that a runaway convention could emerge, and that’s what makes people skittish.

and that’s what makes people skittish.

And so it should.

It’s a historical fact that the Communists are always far better organized than their opponents. If they can ever get their feet in the door, they’re ready and able to ram their odious agenda through any opposition, either by force or by ill-informed consent. Rules on paper never even slow them down.

No, it’s not possible for there to be a runaway convention of the states.

The swell of support for such stupid ideas (among others) is truly concerning.

Yesterday a Warren campaigner stepped up on our porch looking for a family member who is a registered independent. I asked him why he would work for someone who was a proven liar. He tried to hand me some literature on her and I strongly advised that would not be in his best interest. We were having a family get together that afternoon and we all started chanting Trump Trump Trump Trump. We trumped him right off our porch.

Big Chief Pimple On Her Tongue hates federalism now. Add this to her hatred of the first two Amendments.

How stupid is this? I’ll tell you how stupid.

Let’s suppose, for the sake of the argument, that she has what it takes to get an amendment passed if elected. Well, she still needs to get elected first, right?
And how do you get elected? You need to win the electoral college!
But there she is, telling the same voters she needs now, that her priority is to nullify their votes for every elections after that.
Yeah, that’s pretty stupid.

She’s sell out her mother for a dollar. Imagine what she’d sell out our country for.

She’s a scummy as hillary clinton or obama.

How many Native Americans would effectively be disenfranchised if the voting power was concentrated in big cities and removed from rural areas?

This is just one more nail in her “Never get elected” coffin. Like hillary, the best thing we can do is to give this idiot a mic and all of the network’s free time. Of course, we also need a prompter to ask her questions about all of her “Plans”.

notamemberofanyorganizedpolicital in reply to inspectorudy. | December 2, 2019 at 7:56 pm

So, everyone wants to know….

Is Lizzie Borden….er….Warren the France of the Democrap Party?

USTR Lighthizer Announces 100% Countervailing Duties on $2.4 Billion of French Products……THIS $2.4 billion U.S. tariff against France would be on top of the $7.5 billion (per year) countervailing duty recently won from the Airbus subsidy case in the WTO…. and by law France cannot retaliate.

Oh my, President Trump strolls into the NATO bilat with Macron while holding a $10 billion legally justified countervailing tariff position….

Democrat pollsters have her ahead of Trump by 96 percent.

Given their track record on previous elections, I’d say that their findings are heartening.

When your campaign promises attack and undermine the Constitution, if elected you are guilty of a high crime on Day 1.

As someone else said in relation to Elizabeth Warren and her “plans”: A plan without a cost analysis is not a plan at all; it’s just an idea.

She’s kinda having a yard sale, and selling her old crap: namely, herself.

Ha ha, she won’t be the first, either.

This fool is running on devaluing her own state’s influence in an election. MORON.

Waxing poetic about her first term as president? Did that include nostalgic musing about the 25% unemployment rate she enjoyed before it jumped to 40%? About the millions of “new citizens” rushing up from the south? About tripling the national debt in her first year? About waving goodbye to one major corporation after another fleeing our shores due to prohibitive tax burdens?

Ah, those were the days.