After several months of a slow ascent to the top tier, Elizabeth Warren is now losing ground nationally and in key caucus/primary states.

In early November, the polling experts at 538.com wrote that Sen. Elizabeth Warren’s poll numbers had “leveled off” but were unsure if it she had hit a ceiling or if it might just be a “momentary blip.”

As it turns out, it wasn’t just a “momentary blip.” After several months of a slow ascent to the top tier, Warren’s numbers are actually in a decline. She now trails Joe Biden and Sen. Bernie Sanders nationally and is also falling behind in key primary/caucus states:

The senator has lost ground in the Real Clear Politics national average of primary polls relative not just to Joe Biden but Bernie Sanders. She’s lost over eight points in that measurement in the space of just six weeks. The story is much the same in Iowa, where Warren has shed five points from her October peak and ceded momentum to South Bend Mayor Pete Buttigieg. In New Hampshire, the Bay State’s backyard, Warren’s position deteriorated by eight points in roughly the same timeframe.

The four most recent polls in the caucus state of Iowa show Warren in second to Mayor Pete after behind ahead of the pack or tied there for several weeks.

Her numbers in New Hampshire are very wobbly, and currently she stands at just 1.7% ahead of Mayor Pete in the polling averages there.

Here’s what the national averages chart looks like for the last six months. Biden is the green line, Warren is the brown, and Bernie is the periwinkle blue (the mustard yellow color is Kamala Harris): 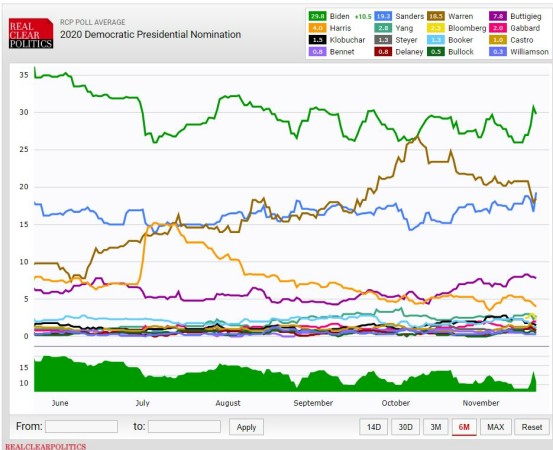 All of these polls were taken before this week’s Democratic debate, so it will be interesting to see what things look like for Warren in the coming days in terms of post-debate polling.

So what brought the decline on? As I’ve written before, I don’t think there’s any question that numbers drop coincides with the release of the details of her Medicare for All plan, and the scrutiny of it that has been done by analysts. For months she had stalled Democratic voters, journalists, debate moderators, and her political opponents when pressed for specifics on what the plan would be like and how it would be paid for.

It frustrated people and made it look like she was either unprepared for the questions or trying to hide something – or both.

And when she finally did release it, it was an insult to everyone’s intelligence. She actually stated in her Medium post the plan would be fully paid for “with targeted spending cuts, new taxes on giant corporations and the richest 1% of Americans, and by cracking down on tax evasion and fraud. Not one penny in middle-class tax increases.”

Even Democratic voters who are much more open to these types of government plans know their taxes would go up under Warren’s plan. Billionaires cannot and will not be funding every penny of it. It costs an estimated $52 trillion. The money has to come from somewhere.

Guess where it will come from? In addition to those billionaires and employers, the middle class would indeed be paying for it, contra Warren’s claims otherwise. Even CNN did an analysis and talked to numerous economic experts who noted backdoor and indirect ways Warren’s plan will cost middle class taxpayers money.

Remember, too, that two of the biggest critics of Warren’s version of Medicare for All have been Mayor Pete and Biden. Even Sanders has criticized it to a lesser extent. In addition to that, he’s also stopped reminding voters that his plan, too, would raise taxes on the middle class. All three of them have seen their national numbers rise this month where Warren’s have dropped.

It would seem that the people who have criticized her Medicare for All plan the most have elevated their campaigns at the expense of hers.

In the debate over healthcare plans, Elizabeth Warren seems to be losing the battle. It remains to be seen if she will ultimately lose the war over it, too.

Elizabeth Warren: That insufferable know-it-all nun you had in 6th grade at St. Mike’s parochial school who said you’d never amount to anything, that you were going to hell regardless, and who smacked your knuckles with a ruler in front of the class for passing notes to your friends.

Gee, I wonder why folks aren’t warming to her?

She is exactly like my eighth grade teacher, Mother Mary Peter.

When she found out that a group of us were NOT going to Catholic HS, she pulled out the heavy weapons!

She berated us for about half an hour. That we were all going to be drug addicts and criminals within the year, etc., etc., etc., ad infinitum.

By the end of it, one of my classmates was sobbing. Me? My eyes just glazed over. This was the beginning of my journey out of the church.

Now that I think about it, Warren does look a bit like the good Mother. Hmmm.

notamemberofanyorganizedpolicital in reply to NavyMustang. | November 23, 2019 at 12:29 pm

America is figuring out that we do NOT need another leftist Harvard fool as President. Too bad, I was really hoping to have her as the Dem nominee. She would become Dukakis 2.0.

What? That’s unpossible! She promised people everything!

Free hint, Lizzie… you can get elected as a con artist (especially as a Democrat), but you have to be better at it and more charismatic than you are.

Even the left wingers are finally realizing that Santa, the Easter Bunny and Warrens free health care plan aren’t for real.

Details, we don’t need no stinkin details. When they are scrutinized, they come up way short. Then the realization happens, if you pay taxes, you will pay for the 47% who doesn’t.

Po’ Ol’ Lizzie…. She brought down her ax too soon.

Well, to be a Stickler, the cost won’t be JUST one penny to the middle class — way, way more.

While I am not surprised that the more people hear her, and her “plan for that” scheme where all will lose money, that her polling would sink, I am surprised at Biden’s numbers going up.
While it’s still a period of time when there are people who don’t want to believe the corruption that is Biden, his numbers shouldn’t be going up. Are these democrats this stupid?

Yes, old goat, they are. They certainly are.

Yeah. Biden has remained steady as the other crackpots show that they are nuts. Warren is in another scandal today…lied about her son attending public school when he went to elite private.
Tulsi stands out, but the Democrats hate her because she went against Clinton. Tulsi also subscribes to the ridiculous Green Deal and I believe she is for free college for immigrants and free health insurance. In other words, immigrants are more important than citizens.

notamemberofanyorganizedpolicital in reply to puhiawa. | November 23, 2019 at 2:22 pm

Epstein and his Child Molester Clients…..

DEMS have NO problem Accepting Corruption of all stripes.

Barry in reply to notamemberofanyorganizedpolicital. | November 23, 2019 at 2:57 pm

Biden will be exposed. Corruption is catching up.

don’t you just hate it when you have to back up your PANDER BEAR routine? Talks cheap it takes money to buy whiskey.

Warren told another bald-faced lie the other day, claiming that her kids went to public schools (they did not). She appears to be a pathological liar who just can’t, or won’t, stop making easily-disprovable claims about her life. (Another example, besides the “I’m an American Indian” lie, was her claim that she was fired from a public-school teaching job for being pregnant, when in fact she was offered a teaching contract, while pregnant, but turned it down because she found the job boring).

It will be interesting to see what ultimately sinks Warren’s candidacy. Will it be her lousy policy proposals, her chronic lying, or something else? Stay tuned . . . .

I really thought that Warren was going to keep moving up until she became the nominee. I grossly underestimated her ability to piss off *Everyone* who has to listen to her talk!

notamemberofanyorganizedpolicital in reply to Tom Servo. | November 23, 2019 at 2:19 pm

Lizzie is a Bully.

She’s never had anyone call her out on her FraudS and LieS until President Trump.

Bullies think they can get away with everything and anything – since they have all their lives – until they’re Exposed!

She went insane 6 years ago but no one noticed.

notamemberofanyorganizedpolicital in reply to puhiawa. | November 23, 2019 at 2:18 pm

The Dem primaries would seem to be about whether the candidates can learn to lie and obfuscate quickly enough to get through the election. And Warren is proving she is a terrible liar. The rest are just as crazy, but are more adept at dodging facts and truth. Well, not Kamala – she’s just plain clueless.

The most eerily bothersome thing about Warren is she doesn’t stay down when knocked down and doesn’t recognize or accept that she’s been knocked out. The DNA test disaster and Trump branding her Pocahontas (Dammit DJT! It’s Fauxcahontas!) was a brutal blow. Stealing her identity and benefits from disadvantaged Indians! The school pregnancy lie. The CFPB scam if that ever gets aired out. EW has been down for the count several times and then she staggers back for another round like the former never happened. She’s like a zombie someone forgot to double-tap (Zombieland Rule 2). While I can respect coming back from a knockdown or a defeat, where it was your own wrongdoing that beat you I do NOT understand coming back without humility, remorse, apology …

That leads me to conclude there is something seriously defective in EW. She’s like the embodiment of a deathly condition cited in the scriptures; specifically someone whose conscious mind is seared over by their lustful desires – such that nothing can ever stand in the way of what they lust for. On that scale, she’s sandwiched neatly between Hillary Clinton and Stacey Abrams. Three people who ought to be institutionalized and forced into therapy.

notamemberofanyorganizedpolicital in reply to MrE. | November 23, 2019 at 3:59 pm

RE: “The most eerily bothersome thing about Warren is she doesn’t stay down when knocked down and doesn’t recognize or accept that she’s been knocked out.”

But that’s exactly what maglinant narcissist do.

Can you imagine if any one of the Democrat candidates become President (particularly Biden, Warren, or Sanders)? Might as well rename the country the USSA.

I cannot stand the sight of this lying sack of shit. But I will vote for her in our party ballot primary here in peoples republic of IL just so I can watch Pres. Trump make her cry.

Elizabeth Warren is a thief. She stole a minorities’ employment opportunity; who knows how she has lined her pockets with the bogus agency she formed in the Senate; we know the extend of the harm she created by backing the sick and destructive “Occupy Wall Street” disaster that spread across the nation; and who knows what else warren has stole, unlawfully coveted or who she bribed with her scams.

She should be rotting in hell with the likes of hillary clinton, schiff, pelosi, kerry, obama and the rest of the gang. But first: the gallows.