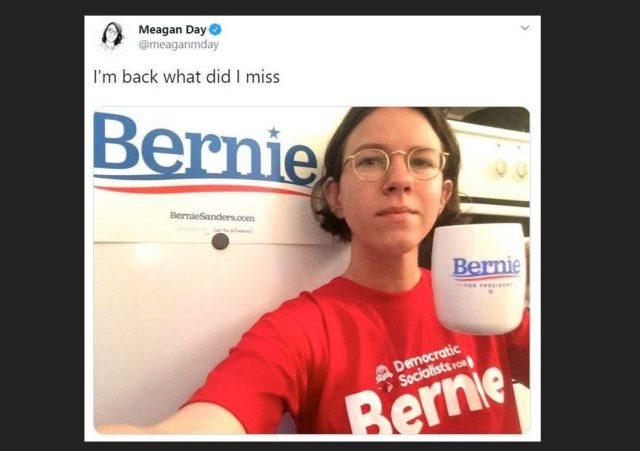 An important narrative in Elizabeth Warren’s presidential campaign is that she lost a teaching job early in her career because she was pregnant.

Yet that narrative has been largely-debunked by Warren’s own words in a 2007 interview, and through records obtained by the Washington Free Beacon and others.

Warren’s response has been familiar to those of us who covered her 2012 Senate campaign, when she blamed a “right-wing extremist” for bringing forward facts that disproved Warren’s claim to be Native American. (As the link indicates, it appears Warren was referring to me.)

History has shown that the facts brought forward were accurate, Warren’s claim to be Native American was false.

Fast forward to the supposed loss of a teaching job due to pregnancy. In the face of facts showing Warren’s narrative doesn’t hold up, Warren has blamed the “right-wing smear machine” for the controversy. Mainstream media has played a similar tune, focusing on the role of “conservative” websites (primarily the Washington Free Beacon) in digging out the evidence.

But the puncturing of Warren’s narrative didn’t start with anyone who remotely could be called “right-wing.” It appears to have started with Meaghan Day, a Bernie-supporting writer at the socialist Jacobin magazine.

Day criticized Warren for saying her “first career” was a “former public school teacher” when she only worked for a year. In response to pushback that Warren was fired for being pregnant, tweeted the link to the 2007 video: 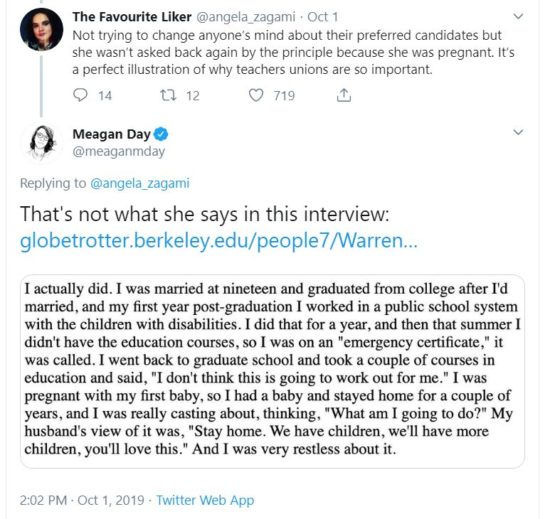 In the March 2007 interview, which was posted on social media last week by a writer for the leftist Jacobin Magazine, Warren stressed that to keep teaching she would have had to do additional graduate school work because she didn’t have proper certification to stay on.

The story gained traction when liberal Mediaite covered the contradiction, and then became a national issue when the Washington Free Beacon found county records damaging to Warren. The Free Beacon also credited Day for revealing the 2007 video:

Warren’s claim about her dismissal from the Riverdale Elementary School came under scrutiny last week when the journalist Meagan Day of Jacobin magazine noted that Warren’s story appeared to have changed over the years. Day pointed to a 2007 interview Warren gave at the University of California-Berkeley in which she suggested that she left her teaching job after realizing the graduate school classes required for her to obtain a teaching certificate weren’t going to “work out for [her].”

So this story of Warren changing her tune started with a Bernie-backing Socialist who writes for a Socialist magazine. Center and right-of-center media dug up more facts harmful to Warren, but this was in no way a “right-wing” hit on Warren. It’s just facts. Facts that are inconvenient to Warren.

Day defended the tweet after coming under sustained attack: 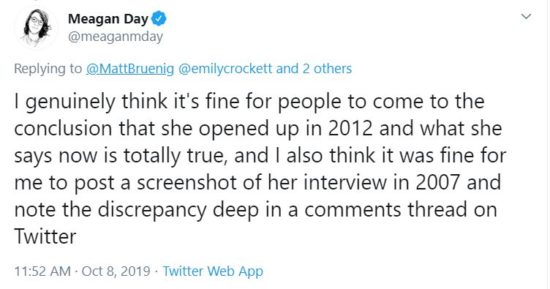 Yet Warren returned to the same form she showed in 2012, blaming the “right-wing smear machine” in a campaign email (emphasis added)

Subject: When right-wing smear campaigns try to dismiss our lived experiences, we can fight back by telling our stories.

Ever since I was in second grade, I knew I wanted to be a public school teacher. And after some twists and turns, I got to live my dream.

But when I was 22 and finishing my first year of teaching, I had an experience millions of women will recognize.

By June I was visibly pregnant — and the principal told me the job I’d already been promised for the next year would go to someone else.

This was 1971, years before Congress outlawed pregnancy discrimination — but we know it still happens in subtle and not-so-subtle ways.

My story is not unique. And now, right-wing media outlets are dismissing my story — and in doing so, dismissing many similar stories of other women who have also been affected by pregnancy discrimination.

We need to call out right-wing smears when we see them — including this one. As our grassroots movement continues to grow, we fully expect to see more of these far-right hit jobs. Our job is to stop them dead in their tracks….

And when right-wing smear campaigns try to dismiss our lived experiences, we can fight back by telling our stories. I’m going to continue to share mine, because we need to talk about how pervasive pregnancy discrimination is, and how many women and families it continues to affect.

Warren has taken a major hit with this story. Even Morning Joe is talking about how it’s part of a pattern of Warren lying:

Fake Native American ancestry, lying about Michael Brown, and now her central life story on the stump about being "fired" for being pregnant is completely falling apart

Don’t blame the “right-wing” — this is part of the Bernie-Warren fight that is percolating throughout social media. Warren finds it easier to attack the “right-wing” because she doesn’t want to take on Bernie Bros and Gals. 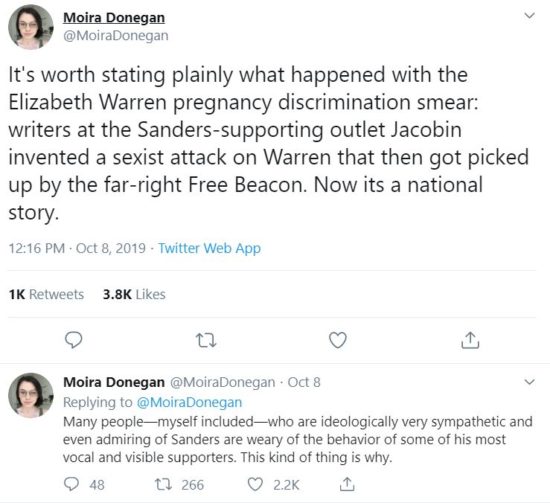 You have to hand it to the Dhimmi-crats for brazen gall and creativity, when it comes to contriving euphemisms that whitewash their lies and deceptions.

And, now, crone Fauxcahontas, a fabulist over many moons, has crafted a keeper — “opening up” is the new euphemism for lying and getting caught.

One has to be pretty stupid to believe that she started to tell the truth when she decided to go into politics.

The best part is that not only do Warren’s own words contradict her story about being a victim of “pregnancy discrimination,” but there is also documentary evidence (the minutes of the Riverdale school board meeting) that proves that she was offered a renewal of her teaching job after that first year, and she turned it down.

Victimhood your way to success!

And, all too predictably, watch the water-carrying propagandists of the MSM fall into line with alacrity, dutifully attempting to assist Warren in escaping from her mendacious predicament:

This is liking having “Pravda” times one hundred, working 24/7 on one’s behalf. You can’t buy PR like this. This is the main advantage of being a Dhimmi-crat apparatchik, today. “Like, Warren is such a HER-o:”

The Elizabeth Warren pregnancy smear shows how poisoned the media world is
https://www.washingtonpost.com/lifestyle/style/the-elizabeth-warren-pregnancy-smear-shows-how-poisoned-the-media-world-is/2019/10/09/6d9db186-ea96-11e9-9306-47cb0324fd44_story.html

Years after Warren left teaching, scrutiny of her story is bringing pregnancy discrimination to the fore
https://www.washingtonpost.com/politics/2019/10/09/years-after-warren-left-teaching-scrutiny-her-story-is-making-pregnancy-discrimination-talker/

Elizabeth Warren Details Her Account of Losing Teaching Job Because of Pregnancy
https://www.nytimes.com/2019/10/08/us/politics/elizabeth-warren-fired-pregnant.html

Women rally in support of Elizabeth Warren by sharing their own pregnancy discrimination stories
https://www.nbcnews.com/politics/2020-election/women-rally-support-elizabeth-warren-sharing-their-own-pregnancy-discrimination-n1064316

Think Elizabeth Warren Lied About Being Let Go While Pregnant? You’ve Never Been a Woman in the Workplace
https://www.vogue.com/article/elizabeth-warren-pregnancy-dismissal

Leave it to the inimitable John Kass of the Chicago Tribune, and, the Boston Herald’s Howie Carr, to set the record straight, with humor:

When will Warren unveil plan to tell the truth?
https://www.bostonherald.com/2019/10/08/when-will-warren-unveil-plan-to-tell-the-truth/

More propaganda on behalf of Fauxcahontas. Notice how the narrative shifts, from addressing Warren’s transparent and self-serving lies, to the allegedly pressing “problem” of “pregnancy discrimination.”

After Attacks on Warren, Women Point Out That Pregnancy Discrimination is All Too Real
https://www.motherjones.com/politics/2019/10/after-attacks-on-warren-women-point-out-that-pregnancy-discrimination-is-all-too-real/

Interestingly, “Commentary” magazine, while still finding time to bash Trump, at least displays a modicum of honesty in gently taking Warren to task for her casual mendacity:

She actually does have a personal connection to American Indians: Her grandfather shot one. There’s a local newspaper story of the event.

Lying for votes from women with families.

Is this her campaign’s foray into trying to woo suburban women from Trump?

Who in her campaign thought this was a swell idea?

“After Attacks on Warren, Women Point Out That Pregnancy Discrimination is All Too Real”

Which obviously has nothing at all to do with Warren’s mendacity. It just means that she was clever enough to base her fabrications on something dumb women can believe. “Jeepers, the same thing almost happened to me once, so it must be true!”

Actually, I’m surprised Warren even chose a plausible premise to build this latest myth around. The spectacular way she bungled the DNA test affair made me think that she’s essentially brain-damaged; but possibly not.

They’re trying to salvage Liz with the old “fake but accurate” defense.

Hillary’s campaign was the first to suggest Obama may not have been born in America during the Democrat primaries leading up to the ’08 election. But the right got blamed for it.

Democrats try to damage each other then blame conservatives for their actions.

Warren is a pathological liar. This is not Trump boasting or exaggerating. She is lying about facts in front of her.

The sanders fascist is as sick as warren, but not as corrupt. Though she’d probably make as murderous a commissar as any one of stalin’s.

Bolsevism without corruption is not possible.

It was not even a plausible lie. I assume that I am not the only person who went to school and had teachers that had children.

This is one of those things that when you hear it, you say to yourself, that can’t be right.

I did have teachers in elementary school who could have been fired for being visibly pregnant.

Of course, they were Catholic nuns.

The ones who weren’t nuns were expected to be visibly pregnant on a constant basis.

I’m trying to imagine what a date with Meagan Day would be like.

This is a delusional woman with very low self-esteem. Is her life experience so lacking in noteworthy accomplishments that she has to make it all up? Her life story can be summed up in “ambitious, lying, scheming, manipulative sociopath”. Pathetic.

To Warren, Bernie and his supporters are the right-wing.

Is obvious.
Criticism of comrade Warren coming from rightist deviationist. Not to worry. Meagan Day is now on list.

Another lie from Warren is no surprise. She’s a serial liar and anyone that pays attention knows that. What surprises me is that with so much practice she is so bad at it. She’s a foolish, a stupid liar who tells lies easily proved to be lies.

The problem with always having the media there to cover your butt is that you forget how to do it yourself.

The responses from the Warren sycophants are similar to the ones that we must believe Blasey-Ford even though the facts didn’t support her. This unfortunately, is the modern world of journalism. Facts bedamned, feelings are what count.

Bernie Bros are some of the biggest misogynists you will ever meet.

“When Right Wing smear campaigns try to dismiss our lived experiences,we can fight back by telling our stories.”
Stories would be the operative word.