The Jewish senator also issued his own quid pro quo to Israel, threatening to use aid as “leverage” to make the nation “change” its behavior. 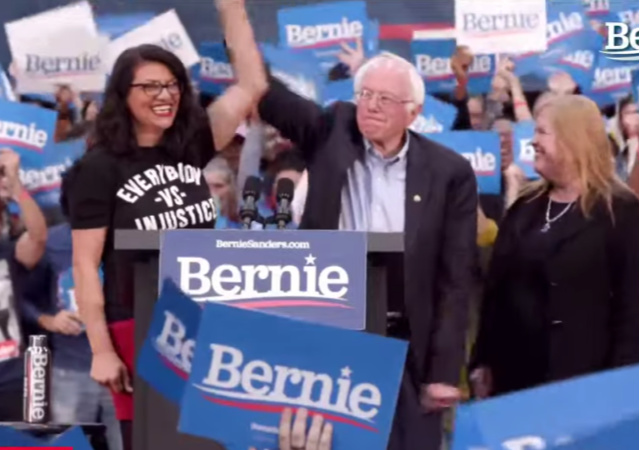 Then on Monday Sanders announced his own “quid pro quo” to Israel. He even said he would use American aid to Israel as “leverage” to force the country to “change their behavior.”

Sanders has now received the backing of three of the four members of “The Squad,” which includes some of the most anti-Israel members of Congress.

Tlaib gave her endorsement at a rally for Sanders in Detroit on Sunday.

She told the roaring crowd that Sanders has “never once wavered in fighting for us, fighting for civil rights and equality.” Tlaib also exclaimed that America deserves “someone who writes the damn bills.”

Therefore, Americans “deserve” the self-avowed socialist as our president.

“I am endorsing Amo Bernie Sanders because he’s not gonna sell us out. He understands that it’s not just about policies and about words, but it’s going to be also about completely transforming the structures in place.” –@RashidaTlaib pic.twitter.com/3SaGZeOUT7

Thank you (Shukran!) Amo @berniesanders for coming to our community to see firsthand and hear from the very people hurt by #corporategreed.

I am proud to endorse you for President of the United States. #13thDistrictStrong #rootedincommunity pic.twitter.com/xXvYJC7qhM

We at Legal Insurrection have documented the numerous times Tlaib did not shy away from expressing her hatred of Israel.

I thought quid pro quos are a bad thing that presidents should not do?

Oh, wait. That only goes for non-leftist presidents. The Democrats have pushed an impeachment inquiry into President Donald Trump over a phantom quid pro quo regarding Ukraine.

Apparently, no one has an issue when Democrats issue one against Israel. Sen. Elizabeth Warren (D-MA) did this a few weeks ago.

“We have a right to say to the Israeli government that the United States of America and our taxpayers and our people believe in human rights, we believe in democracy, we will not accept authoritarianism or racism,” the Vermont independent said Monday at the national J Street conference. “And we demand the Israeli government sit down with the Palestinian people and negotiate an agreement that works for all parties.”

“I would use the leverage. $3.8 billion is a lot of money, and we cannot give it carte blanche to the Israeli government or for that matter to any government at all. We have a right to demand respect for human rights and democracy,” he said.

Sanders has stated before he believes in Israel’s right to exist. Isn’t that sweet?

He has lately hardened his stance against the only democratic nation in the Middle East. Not only that, but he surrounds himself with notorious anti-Israel people like Tlaib.

How desperate do you have to be to get in bed with the devil?

Both of them threw in their lots with evil ages ago, so it’s not that hard to cozy up to yet another one.

notamemberofanyorganizedpolicital in reply to UnCivilServant. | October 29, 2019 at 1:26 pm

Sanders – the Life Long Fake – will do anything from Money.

Ever notice how Communist’s and Islamist’s go together hand and glove.

Well, I went to bed thinking Trump was a shoo-in for 2020; then I wake up to this bit of news and have to grudgingly admit to the handwriting on the wall. Sanders now has it in the bag. Game over for Trump now that he had lost Tlaib’s endorsement.

It’s so depressing that repulsive mediocre twits like Tlaib and Sanders possess any power in a civilized society where their decisions can affect the well-being of decent people who work for a living.

It never ceases to amaze me just how big the hypocrisy is in the dim/lib party.

How can a person be Jewish and vote for Democrats? Yet so many Jews do. What will it take for the majority of them walk away from the party that hates them? Before I can get angry about this, I need them to get angry. It’s like dealing with a battered woman. Before anybody can really help her, she needs to want help.

Endorsed by Medusa. One wretched human being.

Your description is too generous.

Pity no one understands history.

when you are totally consumed by your greed and lust for power, when you are morally bankrupt and concerned only for yourself and your own ego, when you seek only to limit the freedom and peace of all of those around you by your every transparent effort, when your insecurities over your own lack of any genuine or honorable accomplishments finally dominate your entire existence, you become bernie sanders–and you decide to run for president–not because of any call to help the country that by its very nature has allowed you to flourish and pursue your twisted path with impunity but to extend your selfish desire to control those both more and less fortunate than yourself, thinking it may somehow compensate for your myriad shortcomings, and then delude all the ignorant fools who will listen and part them from their money in the ” advance ” of your ” cause ” you reveal yourself as just another well-advertised grifter–with nothing to give and nothing to offer

Quite right. I would add that this description fits quite well for almost all (exception number one is PDJT) contemporary politicians. Particularly Pierre Delecto.

US Jews generally loathe dispise US Joe Jo Blow Control oF US society morals culture religion etc. And side with anyone to eventually radically change things. IE Barry and his hope and change.

You’re a semi-literate, intellectually feeble bigot and a total fool. I hear that Jesus was a Jew; I suppose you have a problem with him, too.

Go lick the boots of your Muslim, Jew-hating masters, like a good little dhimmi.

What I think we may be seeing is a civil war in the DNC. You have the Clinton wing that is well know to all of us. It is your old guard corrupt-o-crats Including Biden, Warren etc.and they manage a sort of global chop shop where they steal our wealth and sell it off to anyone willing to pay. They are well established among the global players.

Then you have the Obama wing which is more aligned with Muslim Brotherhood, Iran, etc. Thus you see the squad and their anti-semitism etc. getting serious traction. Far more Muslims in the world to send in donations than there are Jews.

I posted a link here the other day that showed that Tulsi (pure Obama camp) lost the party designation of “rising Star” when she dared to speak out in support of Bernie when he was robbed of the 2016 nomination. The Clinton wing of DNC dropped her like a hot potato- withdrawing all support.

Tulsi is very progressive and having defended Bernie against Clinton AND recently coming out against Clinton in a manner so aggressive that it assured zero way to walk it back and get faithful Clinton voters on board for the general, is very confounding. She needs them to win. I thought maybe it was some kind of 3rd party vote split ploy or that Tulsi got too full of herself and went off script . It made no sense.

But it does possibly make sense if we are looking at a Team Obama/Muslim Brotherhood attempted hostile takeover of the Clinton/globalist controlled DNC. Then an alignment of the AOC squad and Tulsi (Team Obama) and Bernie coming out against Clinton makes a lot of sense.

Sanders is Jewish in genetics only, but he cynically uses that to try to fool people into thinking that he isn’t just another anti-Zionist and antisemitic POS. Socialism is his real religion, and he hates the Jews’ self-image as members of a nation who have the right to be in charge of their own destiny instead of being at the mercy of gentile hosts.

Only the most contemptible and morally bankrupt reprobate, totally indifferent/ignorant to facts, history and theology, would look at Israeli Jews’ self-defense against the ceaseless jihadist belligerence and genocidal aspirations of the infantile Arab “Palestinian” jackboots, and proclaims that the Jews are the party that is allegedly blameworthy. And, then, threaten the Jews to “get in line” and to submit to the boot of Islamic supremacism and totalitarianism.

Just how many “damn bills” has Bernie written in his long tenure that have actually become Law?

3… The first was to give veterans a cost of living increase 30 years ago and the second and third were to rename 2 Post Offices in Vermont.

Ms. Pig Ebola endorses Sanders, and he accepts it.

What more bad things are left to say about Sanders?

Bernie will regret this when more Jewish voters turn against him. Bernie supports Tlaib, this anti-Semitic female pig. She is a disgrace to the US, but, hey, Bernie needs every crooked vote he can get.

Says one douchebag to another.