Americans support Israel overwhelmingly. The “Israel Lobby” is the American people. That’s a truth people like Rashida Tlaib cannot grasp, so instead they play the anti-Semitic dual loyalty and disloyalty cards.

Rashida Tlaib is a new Palestinian-American congresswoman from the Detroit area.

She’s also an Israel hater and supporter of the Boycott, Divestment and Sanctions movement, which is a modern version of the anti-Jewish boycotts dating back at least to the 1920s in the then British Mandate for Palestine. (See my lecture, The Real History of the BDS Movement.)

Tlaib made headlines when she pledged, right after being sworn in, ‘We’re Going to Impeach the Motherf***er!’.

As much controversy as that m-f-er pledge generated, Tlaib has generated even more controversy by accusing supporters of Israel in Congress of being disloyal to the U.S.

The U.S. anti-boycott laws now are somewhat out-of-date because while the Arab League boycott still exists, it is toothless. The economic jihad against Israel now comes from United Nations agencies, particularly the biased UN Human Rights Council, and from the BDS movement and its governmental supporters in Europe and elsewhere. There is a bill pending in the U.S. Senate that would update those laws.

There is a propaganda campaign against the bill falsely claiming it would punish individuals who personally want to boycott Israel. That’s not the case, as Ben Shapiro writes:

On Monday, Senator Chuck Schumer (D-NY) threatened to cut off security assistance to Israel under Senate Bill 1 unless Senate Majority Leader Mitch McConnell begins to push the budget bills necessary for a government re-opening. The bill itself allows state and local governments to stop doing business with companies that boycott Israel, in much the same way state and local governments have authority to stop doing business with companies that engage in racial discrimination. While some have expressed free speech concerns with the bill, suggesting that companies that boycott Israel are merely expressing their First Amendment rights, the bill itself raises few First Amendment concerns – or at least, it raises concerns only insofar as government anti-discrimination policies with regard to contractors raise First Amendment concerns more generally.

Tlaib wasn’t satisfied just arguing the alleged First Amendment claims. Instead, as BDS supporters and anti-Israel activists often do, she accused the Israel supporters who want a vote on the bill of being loyal to Israel not to Americans, in this tweet: 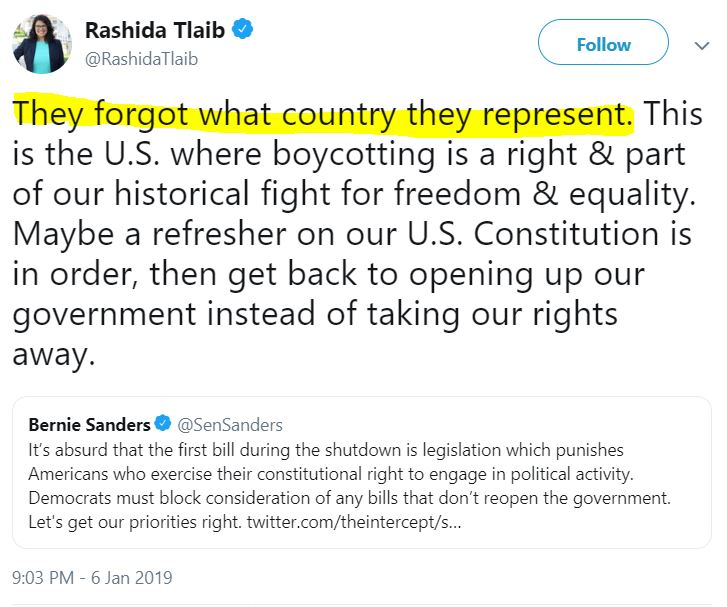 The accusation of disloyalty (or dual loyalty) is a standard anti-Semitic canard. It is irrelevant, as David Schraub correctly pointed out, that the people allegedly serving this foreign Jewish master are not themselves Jewish: 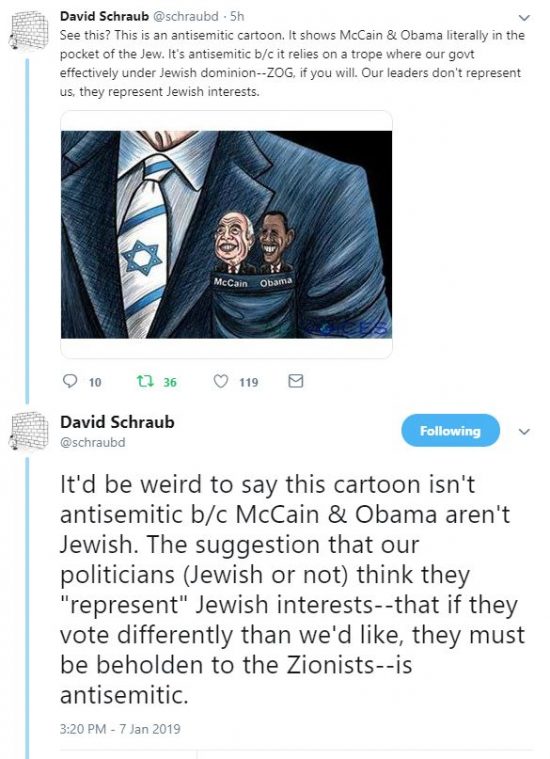 The reaction has been swift and severe, particularly from Marco Rubio, one of the sponsors of the legislation:

This is a lie.

My bill doesn’t punish any political activity. It protects the right of local & state govts that decide to no longer do business with those who boycott #Israel.

So boycotting #Israel is a constitutional right,but boycotting those participating in #BDS isn’t? https://t.co/kY9MSmBkkh

None of this surprises those of us who have followed the BDS movement and anti-Israel activists. They peddle terms like the “Israel Lobby” to suggest a nefarious foreign Jewish influence that corrupts American politics. 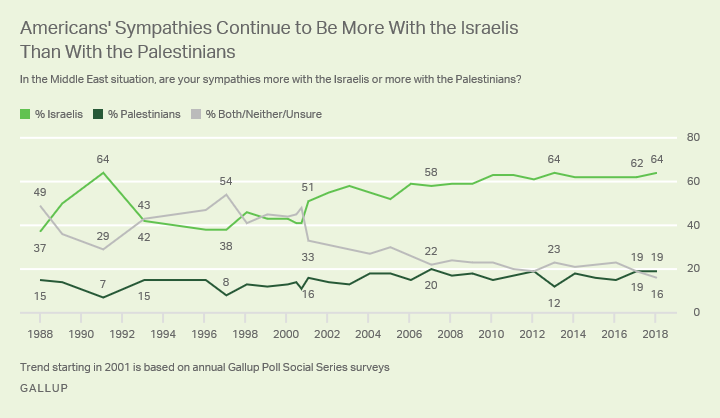 The only section of the American population where support for Israel has weakened is among the far-left, particularly younger far-leftists. That is a problem that needs to be addressed, particularly since many of them populate the ranks of journalists.

But the fact remains that Americans support Israel overwhelmingly. Politicians who support Israel are working the will of Americans. The “Israel Lobby” is the American people.

That’s a truth people like Rashida Tlaib cannot grasp, so instead they play the anti-Semitic dual loyalty and disloyalty cards.

I would have said that Ms. Tlaib is a living demonstration of “dual loyalty”, except of course that she has but a single loyalty…

This Muzziette is a prime example why they are required to dress in sacks with full face veils. We should be so lucky that this one would comply.

The original legislation, from the Carter admin, doesn’t even mention Israel. It prohibits supporting foreign boycotts of US allies. And the Supreme Court dealt with First Amendment issues in the mid 80’s. They can say whatever they like, it’s their actions that are prohibited.

I hope she dies.

Sorry, all. When someone like this is elected to the house, I can’t help myself.

America should not be expected to change our way of life to accommodate the cultures that immigrants refuse to leave behind.

Dont worry people, the media will be along any second now to report on the Democrats racism against Jews.

I support Israel because the Joooozz have bought me. If that’s true, when do I see some cash? Do the Jooooozz not know my routing number? I’m told by the Muslims the Jooooozz know everything. Who do I talk to in the international conspiracy to set up the direct deposit.

All kidding aside, this type of lying is typical for Muslims. It is precisely because of our American sense of fair play that we support Israel. The Arabs have the whole Levant, except for one small New Jersey sized slice That’s too much for them to let go?

Unfortunately, it is. I hope you all have your Qurans handy.

So if you’re familiar with your Qurans, you know that Surah 2 commands Muslims to drive out unbelievers from where the unbelievers drove them out. Muslims are the original cry bullies. The current historical narrative is that the pagan Meccans persecuted the Muslims. It’s not true. In fact the earliest Islamic sources state quite clearly that the pagan Meccans had no problem with Muhammad until he started insulting their gods and their forefathers. But later when they felt the need to make themselves victims they changed their story.

So now what’s her name makes the Palis out to be victims.

They’ll worship some guy as a martyr if he slits an infant’s throat in the child’s crib. But it’s the Pali murderer who is the victim.

Of course it’s just not true that the Jews drove the Arabs out. The Arabs in what became the former British Mandate left because the other Arab nations invited them to leave, because confident of victory they told them it would only be for a little while.

Also, one of the reasons the conflict has gone for so long is that according to the Quran Muslims are the best of peoples while unbelievers are the worst of created beings. Think about the implications. Pigs and dogs are unclean. Unbelievers are worse than pigs and dogs. We are worse than cockroaches. You do not make peace with the worst of created beings.

Again, going back to the earliest, most reliable Islamic sources, there was a 120 year old man (I doubt he was that old but apparently seventh century Arabs weren’t sticklers for record keeping) who made up derogatory poems about Muhammad and his followers. That’s it, just poetry. So Muhammad asked one of his followers to kill him. And one did. So another poet, a woman, made up another poem asking if any Arab was man enough to kill Muhammad. So Muhammad asked again if one of his followers would kill her. And one volunteered. He set upon her while she was lying in bed with her children. In fact, according to the narrative she was nursing one of her children. The man had to move the child away from her breast so he could stab her to death.

He felt bad about it. But Muhammad told him not to worry about it as she was completely unimportant. “Two goats won’t butt heads over her.” You see, Muhammad might have thought twice over killing an important person as perhaps some of the important person’s relatives might have embarked on a vendetta. But if the person wasn’t significant he wouldn’t have thought twice. He’d just have them killed.

I keep thinking back to how Obama kept saying that the assassins who shot up the offices of Charlie Hebdo couldn’t be Islamic as no religion condones killing innocent people. Muhammad had his followers kill poets. He thought they were guilty. Now ignoramuses are telling me it’s too much of a stretch for Muslims to kill cartoonists?

Per the Islamic historical narrative no one ever rejected Islam for a good faith reason. It’s always because somebody bought them off. For instance, the Christians of Najran went to see Muhammad (this is one of the reasons I laugh at the Islamic historical narrative as according to the historical records they were massacred about fifty years before Muhammad was born). And on their way, the Bishop stopped the march and came clean to his followers. “Look” he said to them. “We know this man is a prophet but the Byzantines are paying us good money so we have to reject him.”

So if the Byzantines could afford to pay the Christians of what is now Yemen that kind of money, couldn’t the international Jewish conspiracy of bankers and Hollywood moguls scrape up a little something for me?

First off, she looks like Ernest Borgnine in drag. Second, she’s just another leftist bowel movement in Congress. No need for a third comment!

Woman accusing others of dual loyalty danced with a Palestinian flag during her election victory party and said she would act as a voice for her grandmother who lives in the West Bank.

Tlaib didn’t play the “anti-Semite” card, Wm. She played the “Jew-hating” card. Don’t put water in your mouth to talk. Call it what it is—Jew-hatred. Call her what she is—a Jew-hater.

Don’t be shy, Wm. Tlaib would kill you if she could.

I had predicted to myself, a few weeks ago, that within one month of taking office, we would quickly witness the unabashed, unrestrained and gleeful anti-Semitism — masked under the fig leaf of anti-Israel venom, of course — of our new Muslim Congresswomen, who have been unduly sanctified and venerated by the mainstream media. Hate can’t be restrained, and, now, having been newly-installed in Congress, and, with the media salivating over her, Tlaib obviously feels empowered to spew Jew-hatred, without worrying about any consequences.

Anti-Semitism flourishes on the Left because the Dumb-o-crat Party has made very clear that there are no severe consequences to be borne by any of its politicians who openly fraternize with anti-Semites (e.g., the vile Farrakhan and Sarsour). Nor are there consequences to be borne by its politicians who explicitly express anti-Semitic comments (e.g., Keith “Hakim” Ellison, the members of the Congressional “Black” Caucus, and, now, the odious Tlaib and Ilhan Omar. Such attitudes have been completely legitimized and enabled by the Dumb-o-crats.

Further, given that a devout Muslim’s primary loyalty is to sharia and Islamic tenets, and, to preserving the supremacy of the same over any man-made, secular law (and, rival religions), this twit has some seriously obnoxious gall to raise the issue of “dual loyalties.”