She does love to mingle with anti-Semites.

In the article, Tlaib explained why America shouldn’t deport legal immigrants for minor criminal offenses. The article identified Tlaib as the “advocacy coordinator of the Arab Community Center for Economic and Social Services (ACCESS) in Detroit.” 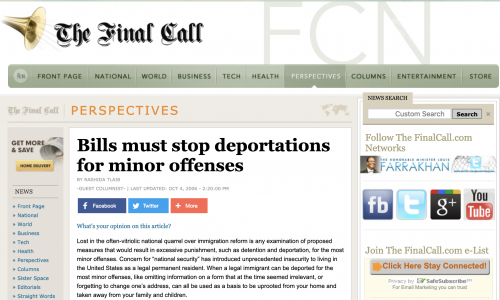 While it looks like it has no anti-Semitic language in it, it does show the connection between anti-Semitism and Tlaib. Bier could not find evidence that Farrakhan or The Final Call endorsed Tlaib and neither could I in a Google search.

However, Bier found that Askia Muhammad, the man who took a picture of Farrakhan and President Barak Obama, wrote an article at The Final Call on Tlaib’s victory in November where he quoted Howard University Dr. Clarence Lusane:

Ms. Tlaib’s victory carries perhaps, the most significance. “She ran on a very progressive agenda. She didn’t bite her tongue, at all,” said Dr. Lusane. Hers “will be an important voice, not just because of her background, but because of the policies that she’s advocated, from increasing the minimum wage, and the peace agenda. It will be great, I think.
“I would suspect that former Representative Conyers would actually be very happy that someone’s coming to take his place who really will represent not only the politics that he advocated for decades, but bring in that additional perspective and experience of being of Palestinian ancestry,” said Dr. Lusane.

Conyers was one of the many in Congress who had a relationship with Farrakhan.

It’s the same newspaper Keith Ellison used to hand out.

Tlaib has only been in Congress a little over a month, but she came on with a bang by having notorious anti-Semite Linda Sarsour, the woman who loves Farrakhan and terrorist Rasmea Odeh, with her at her swearing in. Also, someone covered Israel on the map in her office with a Post-It that says Palestine.

After her swearing-in, Tlaib dined with Abbas Hamideh, “a ‘Palestinian right of return’ activist who has called Israel a ‘terrorist entity.’ Hamideh has also tweeted that Israel has a “delusional ISIS-like ideology” and that the creation of the country was a ‘crime.'”

She also screamed at a party that “We’re going to impeach the Motherf***er!” in regards to President Donald Trump.

Then Tlaib also has no problem letting people know she is okay with the BDS Movement. From The Washington Free Beacon:

In late January, Tlaib advocated against Sen. Marco Rubio’s (Fla.) bill concerning Boycott, Divestment, and Sanctions movement against Israel, which would allow state and local governments to boycott companies that boycott Israel. Tlaib called the bill an “anti-First Amendment, anti-speech bill,” in an interview for the Intercept‘s “Deconstructed” podcast.

In further support of the BDS movement, Tlaib attempted to organize a congressional trip to the West Bank. The attempt was in opposition to an Israel trip traditionally organized for freshman members of Congress by AIPAC, a group that advocates pro-Israel policies.

“I want us to see that segregation [between Israelis and Palestinians] and how that has really harmed us being able to achieve real peace in that region,” Tlaib told the Intercept before she took office. “I don’t think AIPAC provides a real, fair lens into this issue.”

What’s the difference between this filth and David Duke? At its essence, nothing – except this pile of excrement got elected to Congress and Duke didn’t.

Duke has weighed in on the controversy and likes what he sees coming from these ladies.

Honestly had no idea until I read your comment and then saw it was a story today.

How can anyone be a Democrat? The party is horrific.

When you’ve been indoctrinated your whole life, this kinds of animals appear quite human.

Thanks for the protection, Crying Boehners.

When you derisively call someone an ‘animal,’ it’s obviously hyperbole.

In the case of this bigoted pig, it ain’t.

“What’s the difference between this filth and David Duke?”

What’s the difference between this filth and David Duke? At its essence, nothing – except this pile of excrement got elected to Congress and Duke didn’t.

A lot more than that. When Duke foisted himself on the GOP, it did everything it possibly could to distance itself from him. There has never been a time when Duke was ever welcome in the GOP. When he won a primary everyone in the party campaigned for the Democrat. He is literally a RINO — the only sense in which he is a Republican is that he says so and nobody can stop him saying so.

Tlaib, on the other hand, may be on the fringe of her party but she is a welcome member. She is fully accepted by her party, even by those within it who disagree with her on many issues, even by those who take sharp issue with this or that thing she has said or done, even by those who did not support her in her primary and may yet support a challenger in some future primary. The same is true of Omar, Ellison, Waters, Sharpton, Jackson, Grayson, and all these other awful awful people whose equivalents would never get a foothold in the GOP.

The Democratic Party follows the rule of “no enemies on the left”: They may sometimes disagree with communist- and fascist-style leftists, but they only treat people to their right as enemies.

Another thing: The so-called news reporters rarely if ever mention this, but when Duke entered Republican Party politics he left and renounced the KKK. But nobody believed him, and every report on his (when he was news) referred to him as a KKK leader, sometimes adding “former” and sometimes not, but making sure its name was firmly associated with his in the public’s mind. And they were right to do so, since while he outgrew the group and the name, he remained the same person with the same odious views.

Now consider Keith X Ellison, and his decade-plus career in the Nation of Islam. He too abandoned and renounced his former colleagues, when their stink threatened his advancement into real politics. And he too showed no indication of any change in his views. But what a contrast in the coverage. His former association is seldom mentioned, but even when it is it is minimized and dismissed as an irrelevant and short-lived error of a misguided youth. He pretends, and the reporters actively assist him in this, that he was there only for a short time, didn’t really know its views, and left as soon as he found out. Which is utter garbage, but you wouldn’t know it by reading anything reported about him today.

The difference is that you get unlimited strikes when you are Muslim in America. Because Palestine or something.

Bigoted pigs like this get unlimited strikes only with the democrat and GOPe.

I’ve learned a lot here at LI over the years. Its taught me avoid using the terms “Palestinian” “West Bank” and “Occupied Territory.” They are Arabs (mostly) residing in Judea, Samaria, and Gaza. These are disputed territories. These terms are more accurate, and don’t further the Arab narrative of victimhood.

The difference is intersectionality. The difference is not so much that there are Anti-Semites (aren’t there always?) but the extent to which they are accepted by those in the political mainstream.

Because Jews are perceived (in the aggregate) as relatively successful, intersectionality therefore considers Jews “privileged.” And in intersectionality’s world of relative privilege, to be “privileged” is to be despised and undeserving of any protections whatsoever.

So, a new theory produces the same old Anti-Semitism (plus ca change, etc.). But what’s alarming is not the Anti-Semitism (for it is perennial) but its apparent acceptance within the mainstream of one of America’s two major political parties.

The Democrats are screaming for the governor ofVirginia to resign because his offending blacks by wearing blackface umpteen years ago; but when it comes to anti=Semites such as Ellison (who is still vice chair of the Democratic National Committee) and the two new congressional WOGlettes, silence reigns. My only quarrel with the New York Times ad, is why the sponsors contributed money to the scumbag Sulzbergers who for several generations have been anti-Israel even before its creation. They could have made the same point through the Wall Street Journal, which has been and remains a stalwart defender of Israel.