“All of you know your Constitution, the way that impeachment stops is a Senate majority with me as majority leader” 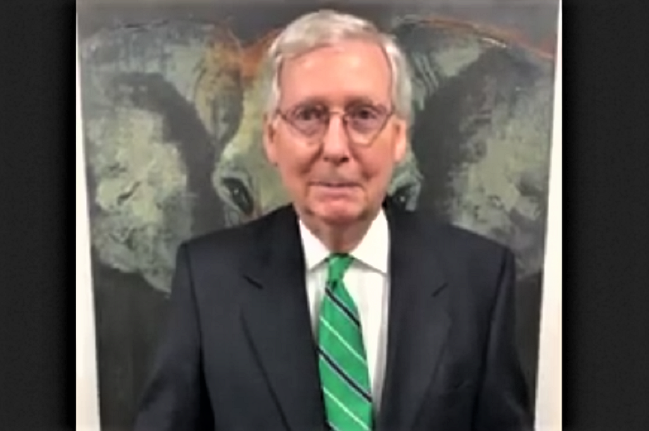 Senate Majority Leader Mitch McConnell (R-KY) has been vocal about his disdain for Democrats and their “impeachment obsession” and their seemingly endless “impeachment parade.”

He’s now taking his rhetoric to new levels in vowing to stop the impeachment circus in the Senate.

Senate Majority Leader Mitch McConnell’s (R-Ky.) reelection campaign is seizing on the fight over impeachment, pledging in Facebook ads that he will lead Republican efforts to stop President Trump from being removed from office.

“Nancy Pelosi’s in the clutches of a left wing mob. They finally convinced her to impeach the president. All of you know your Constitution, the way that impeachment stops is a Senate majority with me as majority leader,” McConnell says in an ad that began running on Thursday.

You can view the ad here.

It might be tempting to view this as just another campaign stunt, but the fact is that the latest Democrat attempt to undo the 2016 presidential election is falling apart and everyone knows it.

RESPONSE⬇ Speaker Pelosi ignores the basic standards of due process observed by past Speakers of the House. This is a sham process, a political messaging campaign served to reverse the results of an election that her party could not win. The American people deserve better. pic.twitter.com/5Ev4oHrXxa

Additionally, President Trump’s approval rating is up to 49% in the latest Hill/Harris poll, and the Democrats’ impeachment obsession has people donating huge sums to the president’s reelection efforts as well as to the RNC.

UPDATE: We have now raised almost $15 million in small dollar donations (including 50,000 NEW donors) since @SpeakerPelosi started this impeachment charade 72 hrs ago! Unbelievable numbers!! Keep it going — you and the dems are handing @realDonaldTrump the win in 2020! ????

“Few issues energize conservative voters like liberal overreach,” Golden said in a statement. “And the Democrats latest outrageous attempt to impeach President Trump has activated our base to new heights.”

McConnell’s office has not responded to questions about Trump’s assertion, though the Senate leader dismissed criticism of the call last week and said it is “laughable to think this is anywhere close to an impeachable offense.”

We don’t yet know what McConnell will do should the House pass articles of impeachment, but I’m pretty sure it will be well worth watching.

schiff sold her impeachment based on a long, drawn out MSM and leaking campaign based on the “whistleblower” complaint. That got destroyed in about 2 days, and now nancy is stuck. Her smart play is to throw schiff under the bus and sell it to her base as finding a better impeacher than him, since he has F’d it up for 2+ years.

Nancy is in the clutches of a left-wing mob?

LOL! Pound sand! She allowed this mob to flourish, even gave plum assignments to the howling moonbats. No sympathy for her now that she’s found out she cannot stop the tiger she has chosen to ride

While I agree Pelosi pulled the trigger a tad bit early because she pictured it playing out differently, she has already stepped out of the plane into open air. No matter how much she may want to get back in the plane, it’s just not possible to “un-jump”

Any turn from her current course will be seen as a victory for the GOP and she knows it. So she has to keep her course and not change direction.

Right now, she’s trying to figure a way of turning this all over to the Senate because she, like everyone else, knows there won’t be any conviction. That allows her to sell another fairy tale to the Left – “the GOP let him get away with it!! – so rally the vote and let’s take back the Senate”

Honestly, that’s what she’s wanted this whole time – to send it to the Senate and make it THE only issue for 2020 voters. And as soon as she had a chance to open the “Impeachment” door, she grabbed those door handles with both hands.

Her problem is she knows the “high crime and misdemeanor” dinner plate she wanted to deliver won’t be a five-star meal, but just a dressed up rubber chicken.

Hell, I wouldn’t be surprised if we start hearing more from the D’s in the Senate saying there is no way they can convict on such flimsy evidence….. and those voices jyst might be the ones who give her a way out.

I seem to recall that the last time he was running, Mitch McConnell was promising to repeal Obamacare (if the Republicans got the majority). I suspect that in campaign ads he’s claimed fiscal responsibility and tough on illegal aliens / supports American workers.

He’s also got dodgy connections with China and a member in good standing of the swamp.

It would not surprise me at all if in an impeachment scenario he stabs President Trump in the back — by inaction most likely so that he’d have plausible deniability.

This ad means nothing other than McConnell will say whatever it takes to increase his odds of reelection.

“…whatever it takes to increase his odds of reelection.”

And he is up in 2020, which means he has no choice but to be nice and fair to the president.

There’s even a chance, a good one, that he believes Trump is being unjustly railroaded.

McConnell is as dirty with Red China as dianne feinstein is, and as biden, pelosi and clinton are with the Ukraine. To say nothing of obama, who knew EVERYTHING.

What we’re going to soon discover is that our ‘ruling class’ has betrayed us, sold themselves out to foreign powers, caused our country to be looted, and the pocketed fortunes.

There’s a reason all these foreign nations had ridiculous trade agreements with us that were so out of whack with our interests.

I’m not a fan of McConnell, just the opposite. OTOH, he does some things I like, and he is pretty savvy at the political game.

McConnell’s business interests may be corrupt, but I have seen nothing that shows it to be likely.

You got it. McConnell is as corrupt as anyone in the swamp. As much as anyone, he is captured by the “there but for the grace of God go I” curse. McConnell has no choice but to defend Trump here. Pelosi would cut a deal with McConnell if she could. But she can’t. She has lost control of the House to the Squad so McConnell left with no other choice, he is propping her up to protect her, NOT TRUMP. It’s synchronicity. Politics and strange bedfellows…

Almost everything has been laid out in the open for us to figure out for ourselves who the swamp is and how it works. We just need to seize the narrative and carry it through. Romney, Kerry, Biden, Collins(?) and others are banding together because of common corrupt interests that are threatened. Trump has them so corralled into a process they started but can no longer control that it has become a death march if not stopped. That is why they are desperate to get rid of Trump before the election.

Ironically, China could help sweep out the swamp by cutting a trade deal NOW were they not the main benefactor of all of this corruption. But if they become convinced it is hopeless to resist Trump, they will cut a deal before Trump gets re-elected. A firmly entrenched Trump in the White House with his opposition swept out of “both” parties will be be less willing to cut China any slack at all.

“…That is why they are desperate to get rid of Trump before the election. But they wouldn’t survive an impeachment.”

I seem to recall that the last time he was running, Mitch McConnell was promising to repeal Obamacare (if the Republicans got the majority). I suspect that in campaign ads he’s claimed fiscal responsibility and tough on illegal aliens / supports American workers.

He’s also got dodgy connections with China and a member in good standing of the swamp.

It would not surprise me at all if in an impeachment scenario he stabs President Trump in the back — by inaction most likely so that he’d have plausible deniability.

This ad means nothing other than McConnell will say whatever it takes to increase his odds of reelection.

McConnell is a snake in the grass RINO. Was angry to see him re-elected in 2014. No way I would ever support him. The people of Kentucky should know better. Obama would say “Jump!” and McConnell and Boehner would say “How High?”

I am no Turtle fan, but given your scenario, would you rather see a Democrat get his seat?

Mitch has been pushing through many of Trump’s Judge nominees. It’s hard to say that is a terrible thing given how it is already been seen in areas where rulings from courts would never have gone as they are going now.

He has also lost a number of fellow RINOs in Congress, so while I don’t trust him, and wouldn’t support him, if I were in his State and it was a choice between him and a National Socialist AKA Democrat, he would get my vote. He is still far to the right of where the other party is currently.

Just as I had to vote for Romney and McCain because it was a vote against Obama, it is sometimes how you are left with a choice of a handful of crap vs. a ton of crap. Either sucks, but one definitely sucks less.

Who would replace him? The lesson of Boehner should be remembered; you don’t destroy without knowing what you will get afterwards. Ryan was at least as bad as Boehner.

We also have to give McConnell credit for (among other things) engineering the opportunity to nominate the conservative judges Trump is supporting. That was 10 years of hard work and planning; it’s also not something a RINO would do.

There were many of us who were against Ryan replacing Boehner, and Ryan turned out far worse than we who opposed him feared.

As stated above, McConnell isn’t ideal, but losing a seat in the Senate is worse, in my opinion. And at least he has done some good in the Trump agenda which will have a positive effect on the courts for years to come. I think the left are also concerned about their losing their lock hold on the courts which is fueling this impeachment parade.

I trust the man as much as I trust Graham, but I’d want him in place as Majority leader over a Democrat, or worse over a Romney type of “republican”.

Now, let’s look at obama: THE WEASEL HAD TO BE IN ON IT.

Ukraine seems to have been the playground of the left. It was the gateway to Russia in a lot of ways, probably to hide the direct ties.

At least McConnell is saying the right things, and it is through him that Trump has been rebuilding the courts to return to Constitutional law over political activists wearing robes.

Compared to a Democrat winning his seat, I’d still rather see the Turtle over that. Just like I would have rather seen McCain or Romney win over Obama, though I think either of them would have been poor Presidents.

This is a pick your fights type of issue. If you can elect more solid Senators in it would also help keep McConnell in line. What gave Ryan the ability to be such a turd in the cornflakes were his fellow RINOs. Had the House been stocked with better Representatives rather than too many phony conservatives things would have been better during Ryan’s turncoat tenure.