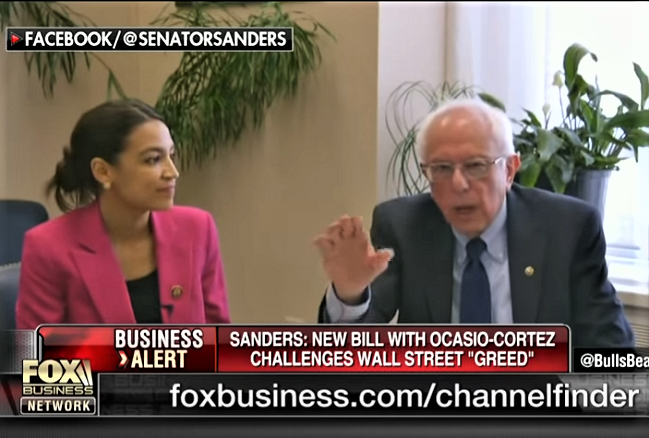 Back in March, I blogged that Sens. Elizabeth Warren (D-MA) and Bernie Sanders (I-VT) were competing for the coveted Rep. Alexandria Ocasio-Cortez (D-NY) endorsement.

While he lost out to Warren for the socialist Working Families Party’s endorsement, Sanders took the AOC endorsement prize.  She formally announced her choice on Saturday.

Today I am endorsing Senator @BernieSanders for president.

In the end, we must come together to defeat Donald Trump. We should do so knowing he is a symptom of a larger problem – and our greatest hope is a multiracial, working class movement in the United States of America. pic.twitter.com/9fiTS7FTX9

“I am joining Alexandria Ocasio-Cortez tomorrow to officially & publicly endorse a true hero of the people, Senator Bernie Sanders, as our next President of the United States!” Moore posted on Twitter on Friday afternoon. “I will speak tomorrow for him at his “Bernie Is Back!” rally at 1pm in Queensbridge Park in NYC. Join us!”

Bernie’s campaign has been flagging of late, so the big question is whether or not AOC’s (oh, and Michael Moore’s) endorsement will make any difference.

Sen. Bernie Sanders (I-Vt.) is seeking to bounce back in the Democratic presidential primary with an assist from one of the left’s brightest starts, Rep. Alexandria Ocasio-Cortez (D-N.Y.).

Sanders will return to the campaign trail on Saturday in the New York City borough of Queens for the first time since he suffered a heart attack.

. . . . Sanders appeared to be losing momentum in the race even before his health problems, so the Queens stop is an important moment for the progressive firebrand to both reassure his supporters and tell the world he’s ready to take on the other top-tier candidates — particularly Sen. Elizabeth Warren (D-Mass.).

The timing of the Ocasio-Cortez endorsement suggests Sanders’s team felt it needed a burst. News of her expected support churned up positive headlines for the campaign at a time when it needed some good press.

“Having someone like AOC promoting someone like Bernie Sanders might energize a lot of younger people to vote,” said Raffi Mercuri, the chairman of the local Democratic Party in Boulder County, Colo.

Mercuri added that Ocasio-Cortez’s influence among Democrats, particularly younger ones, was on display last month when she spoke at the party’s annual Truman Dinner.

No, the kiss of death. The clown Squad’s leader wants to see the world Bern.

That’ll get the corrupt hack another 3 votes.

At least he finally nailed down the coveted Vermont vote.

one wonders how much that ‘coveted’ endorsement cost bernie.

one more shakedown before the big MI

Reds of a feather stick together.

Psycho-Chick is preternaturally stupid, and utterly ignorant of every field of human endeavor . . . but nobody’s ever said she isn’t authentic. And so is Bernie—well, at least when compared to a total fake like Warren&mash;so it’s not too surprising when bacteria of a feather infect together.

Larger forces are going to guarantee that Bernie loses. So, were Psycho-Chick smarter, she’d do better to sit this one out at least through the primaries.

Interestingly enough, while the Working Families Party has endorsed Warren, and the Democratic Socialists of American have endorsed Sanders, the Communist Party USA currently claims that it doesn’t endorse candidates who aren’t Party members, but does seem to lean toward Sanders as the genuine article, vs. the upstart copycat.

Every time I hear AOC speak, all I hear is the ocean.

This is what happens when a overqualified bar tender is elected to Congress.

Socialists have to stick together, at least until they get into power. Then they can fight internally over that power.

I don’t know where their third Socialist comrade, Tlaib, fits in to this power scheme. I suspect she will serve as their Trotsky, a “useful idiot” until she gets in the way, and then she will be eliminated.

Right after his heart attack which makes him less electable? But increases the chance that if she gets in as his VP, she could get promoted upon his demise.

Arti, my take on this as well. Like it or not Bernie is popular among the Left. This (Bernie’s run for President) would be the perfect vehicle to launch a Socialist/Communist/Whatever-ist into the Oval Office. A Bernie-AOC ticket would garner a lot of support. He take the Oath of Office, givers AOC a wink and a smile, and promptly drops dead of a massive coronary.

Br afraid. Be very afraid. And don’t write these lunatics off. Just because they are crazy doesn’t me they aren’t (gag!) smart.

Happily, AOC is only 30 and as such does not qualify to be on a presidential ticket in the first OR the second spot.

So how do the leftards reconcile old white dude, multimillionaire, patriarchy and alla that stuffs?

I’m not surprised by the bartender endorsement of Bernie, they had traveled around in their endorsement tour together and they are quite in line with each other’s views. Warren is not a warm person, and little AOC is vain, not wanting to really share the stage with any woman who would have more power than she thinks she has. Bernie is squishy in many ways, and he would give her access to the WH should the country be so deluded to vote him into power.
She is narcissistic enough to think her praise of Crazy Uncle Bernie is going to give him a massive edge to winning the nomination. I doubt it will move the bar up at all.

LoL. Big deal. Bernie has about as much chance of getting the nomination as there is in finding a virgin in a maternity ward. So AOC’s “endorsement” means nothing.

I’m sure the idea that you get an AOC who is also a POC will miss that the “A” could have a different meaning.

It’s smart. It allows the eventual nominee (who won’t be Sanders) to distance themselves from the squad.

That endorsement could be the kiss of death. AMC is not that popular in Polls.