(But she’s totally not a socialist.) 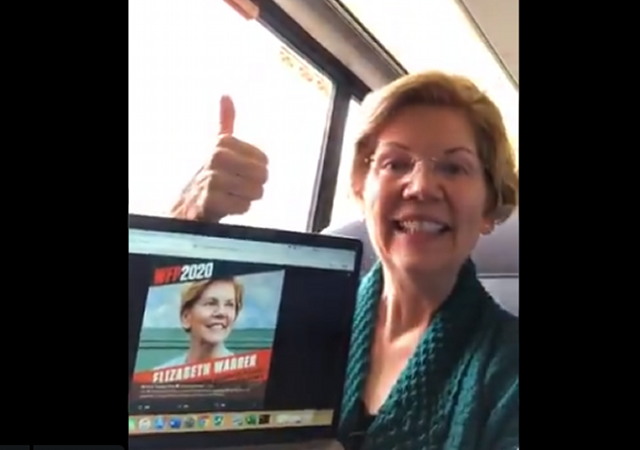 The Working Families Party, an organization which espouses Democratic Socialism and endorsed Bernie Sanders in 2016, is now throwing its support to Elizabeth Warren for 2020. That’s rather telling.

If you’re not familiar with the Working Families Party, this should help:

These four members of Congress have courageously stood up for their constituents in the face of poisonous hatred from the right wing. Now they’re not just facing Republicans in 2020, but threats of primary challenges from the corporate Democratic establishment. That’s why we need to come together now to have their backs.

Warren has gone on record multiple times calling herself a capitalist. Why would the Working Families Party support such a candidate?

“The Working Families Party is proud to announce our endorsement of @ewarren for president in the Democratic primary,” the group tweeted.

The progressive group, which is aligned with unions, endorsed Sen. Bernie Sanders (I-Vt.) last campaign cycle, but this time picked Warren amid a push to defeat centrist candidates like former Vice President Joe Biden in the race for the Democratic nomination.

“If our focus is on victory, we can’t be delusional about it,” Maurice Mitchell, the WFP’s national director, told The New York Times.

“You don’t defeat the moderate wing of Democrats through thought pieces or pithy tweets, you defeat their politics through organizing.”

A party spokesperson said Warren received more than 60 percent of the votes on the first ballot of the “tens of thousands” of members.

The Working Families Party is proud to announce our endorsement of @ewarren for president in the Democratic primary. #WFP2020 #WFP4Warren pic.twitter.com/HnVofql6Xp

What cheering in the Quiet Car looks like. Thanks @WorkingFamilies! pic.twitter.com/kuPZlWBlbp

As you can probably imagine, many Bernie Sanders supporters are not happy about this.

The Working Families Party, the progressive political group, endorsed Senator Elizabeth Warren of Massachusetts for the Democratic presidential nomination, the New York Times first reported, and the news is riling up supporters of her 2020 rival Senator Bernie Sanders of Vermont.

Sanders fans are upset because the WFP was put on the map, so to speak, by its endorsement of Sanders in the 2016 presidential election…

It will be interesting to see in the coming months if WFP’s endorsement will sway other progressive organizations as they make their endorsement choices.

For now, though, Sanders’ supporters are taking to Twitter to announce that they are unfollowing the party, calling the WFP “fools,” and calling the endorsement an “outrage.”

Warren and Sanders occupy the same lane in the 2020 Democratic primary field. Some people seem to think that if one of them drops out, the other will automatically absorb the other’s supporters.

This endorsement shows it might not be that simple.

Warren is a capitalist in the same way thst I’m a Martian.

We need to end fusion ballots. A Political “Party” that merely puts up another party’s candidate is not an independant entity. Put up your own candidates or drop off the ballot.

IF this outfit cared about working families they would back Fauxachontas.

Nothing but a communist group endorsing a commie.

notamemberofanyorganizedpolicital in reply to Albigensian. | September 17, 2019 at 10:05 am

Sanders fans are upset because the WFP was put on the map, so to speak, by its endorsement of Sanders in the 2016 presidential election…

Say what?! This is the first I’ve heard that it even exists in other states, and I’m skeptical that it is “on the map” in those states, but if it is then maybe the Sanders endorsement did it. But in NY, which is the only state where I’m aware of its existence, it’s been a significant player for the last two decades. Nobody paying attention to NY politics, or who has voted in a NY election, can have been unaware of it.

For those who’ve still never heard of it or don’t know what exactly it is, it’s ACORN. At least in NY, when ACORN fell into disgrace and supposedly disbanded, it just continued to operate under the WFP label that it had created in the late 1990s. (And let me remind those who’ve forgotten, that ACORN itself was just a label used by the SEIU for its non-union political activities.)

She presents another meaning to not all there.

Sanders and Biden are fighting hard over the all important Louis Farrakhan endorsement. It’s a must, for a DEM candidate.

for some reason, the caption photo of warren, the pose, the thumbs up, etc. reminds me of an exlax commercial from years ago–the gleeful exlaxer now regular again