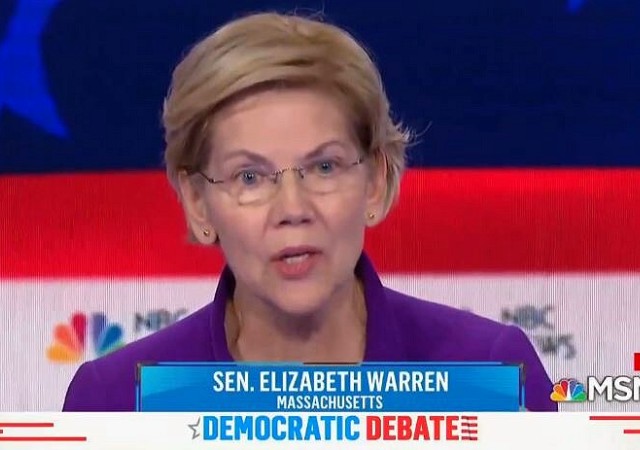 With the frontrunner status in political campaigns comes more scrutiny and attacks from rivals looking to make inroads with voters, as Joe Biden has experienced since he officially declared his candidacy for the Democratic presidential nomination back in April.

While Sen. Elizabeth Warren (MA) cannot claim the frontrunner title, she’s enjoyed a steady rise in polling numbers (she now has a third place polling average), a growing number of rally attendees, and sizable fundraising numbers since May. She also skated through the first two debates virtually unscathed.

But that could be about to change.

As Democrats gear up for the third debate, which is scheduled for September 12th, Politico reports that the “Warren lovefest” may be over:

But with the Massachusetts senator now drawing massive crowds and surging in national polls, competing campaigns are starting to refocus on Warren, looking to blunt her momentum.

Democrats are already opening up new lines of attack: calling her celebrated policy proposals a “fraud,” challenging her to say how she’d pay for a massive health care plan, highlighting a lack of diversity in her supporters and dropping reminders of Warren’s long span as a Republican.

Aides to three rival candidates confirmed in interviews they’re revving up opposition research on Warren in preparation for the next debate on Sept. 12. Still others privately complained she’s gotten fawning treatment in the media as she unveiled a litany of ambitious plans without being pressed on where the money would come from to pay for them.

Here are the candidates who qualified for the next debate:

BREAKING: The final lineup for the third Democratic debate is set for a single night in Houston on Sept. 12.

Of those who will appear on the debate stage alongside Warren in Houston, which one would be most likely to attack her?

The other two candidates in the top tier are, of course, Joe Biden and Sen. Bernie Sanders (VT). The Vermont Senator has made it clear over the last month that he is not willing to go after Warren, whose fan base he would like to win over instead of alienate.

Biden has shown over the last two debates that he will only attack other candidates if they attack him first. Plus, he’s the frontrunner, so all he has to do is survive the debate. So he’s unlikely to take a verbal jab at Warren unless she jabs him first.

But lagging in a distant 4th place is Sen. Kamala Harris (CA), who desperately needs another breakout moment after her polling numbers began a freefall in mid-July. Her polling collapse accelerated after the last debate when Rep. Tulsi Gabbard (HI) took her to the woodshed over her troubling criminal reform record as California’s attorney general.

Her numbers, in fact, are still falling, a fact that has become a cause of concern for donors and supporters.

Harris surrogates like her South Carolina campaign co-chair Bakari Sellers have ramped up their attacks on Warren in recent weeks:

This is a big story and an awful oversight by Warren & Biden, intentional or not.

Again, y’all keep the same energy on these interwebs. https://t.co/3d6LVjOHXt

Sellers also told Politico that he believed Harris had gotten an unfair shake this summer but that Warren, on the other hand, “has gotten a pass in both debates”:

In an interview, Sellers complained that Harris has battled sexism, racism “and the Russians” while others in the race, including Warren, have had an easier ride, including on the debate stage.

“Elizabeth Warren has gotten a pass in both debates,” Sellers said. He said he believes Warren has run the best campaign of the 2020 race, but added: “I think that at the end of the day, the biggest criticism of Elizabeth Warren is her inability to make her plans actual reality. There are a lot of voters — especially black voters — who will say, ‘A lot of this is pie in the sky and we want pie on the table.’”

A July McClatchy analysis of the Harris and Warren campaigns found that Harris might be Warren’s biggest competition going forward more so than Sanders:

As they rise to the top of 2020 Democratic presidential field, Harris and Warren are increasingly in direct competition for many of the same voters and donors, according to polls and fundraising data, with each drawing support from the party’s more affluent, college-educated wing — particularly women.

The overlap between their supporters might be a surprise, especially for Warren, who is usually portrayed as being in direct competition with fellow liberal stalwart Bernie Sanders. But Warren’s strongest support so far has come from the same group of voters that is critical to Harris’ path to the nomination.

Perhaps more so than any other candidate Harris has demonstrated that when the opportunity to go for the jugular of a candidate in the top tier presents itself, she will take it and run with it. Even if the attack ultimately proves to be disingenuous and hypocritical.

I predict Harris will look for ways to pounce and seize on Warren’s unrealistic plans and try to slow her momentum at the next debate. We’ll find out one way or the other in two weeks.

Not hard to do. All that work’s been done, here at LI, by Howie Carr, by Twila Barnes (Cherokee Genealogy & Research).

Lets see the other Ds put pressure on Harvard Law to pressure it to release her job application papers so we can all see in black-and-white where she makes the claim to Native American status.

Is that’s the case then Warren has no competition at all; Harris is the definition of lightweight and she brings nothing to the table. All that Warren has to do is dangle the VP spot in front of her and Harris will keep quiet. She has more ambition than talent and she’ll quickly realize that’s the best thing she has right now.

At least Harris is part Indian….since they majority of Prog taught Dems have no knowledge of geography then the Indian sub-continent could well be just south of LA.

notamemberofanyorganizedpolicital in reply to alaskabob. | August 31, 2019 at 12:57 pm

At best Warren might be 1024th South American Indian since U.S. native American tribes have made it illegal for their members to donate to any DNA data banks or programs.

The takeaway from this is that no one feels the need to go after the front runner. Biden is in the process of self-destructing anyway.

And no one has ever taken Bernie seriously, or ever will. So Warren is the target.

They other Dem runners Communist Chinese checks must have cleared and cleared the way for the CCP’s fav, Ol’ Gropin’ Joe.

She’s pretty safe unless they can find an old daguerreotype of her Trick-or-Treating in blackface.

There’s a high probability of that don’t you think….

This is a process that will keep repeating itself with this weak field.
1) Someone appears to be the front-runner
2) The weaknesses of the front-runner are highlighted
3) Voters decide this person can’t beat Trump
4) Front-runner drops back in the pack and new front-runner repeats steps 1-3

Either the D’Rat Party is doomed, or we all are doomed. What a pathetic crew.

Watching candidates compete by trying to hurt or otherwise impede their competitors, is like watching a long-distance marathon where all the runners have meat hooks.

Hence the DNC kept Tulsi out.

Unless the Dems call out Pocahontas for being Pocahontas, they are not serious.

In fact, it’s enough to classify you as nearly a war-criminal for questioning her status.

Fauxcahontas is SUCH an easy target.

I can see a warren/harris team being a bit of a problem.
Lot of older bitter women out there who feel they’ve been ignored for their “contributions” to society. Especially if their husbands divorced them in their 50’s.

In other words, the other candidates are putting on their warpaint and getting ready to tomahawk Warren’s candidacy? 😉

Warren is a turnkey operation that comes complete with oppo research already baked in. If Harris, Booker, or even Gabbard make an issue of her fraudulent and abusive misuse of the affirmative action system on center stage in a debate, her candidacy …

She’ll wither. Or what doesn’t kill you makes you stronger. One or the other.