Warren already has admitted there could be more shoes to drop on her Native American deception. That’s a problem if you are a Democrat who, above all else, wants to defeat Trump. 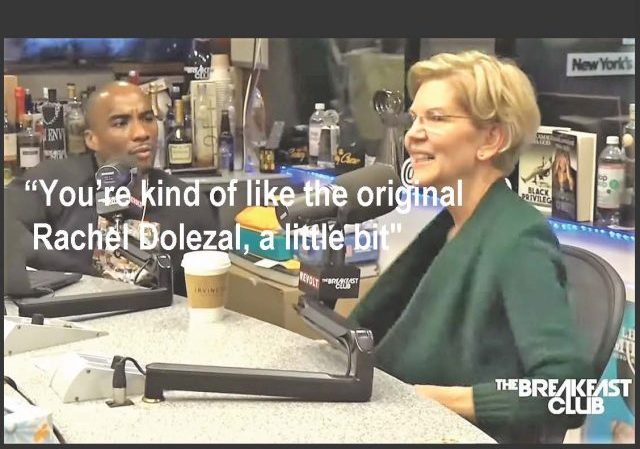 She took a campaign left for dead early in the year after the DNA debacle and her Native American problem, and turned it around on the back of rolling out aggressive plans every few days to keep herself in the news cycle. It took a while, but being the center of news coverage for months appears to be paying off.

Those plans are both a primary election benefit, and a general election curse. The promise to eliminate private health insurance and to tax guns and ammunition into oblivion play well in a Democratic primary, but could be disastrous in a general election. So too Warren’s insistance — throughout her political career — that we are a nation of victims is a hard sell in a time of historically low unemployment.

Warren has perfected the politics of envy, but that may not set her up as a viable general election candidate.

The NY Times is taking note of that problem, Many Democrats Love Elizabeth Warren. They Also Worry About Her:

Yet few candidates also inspire as much worry among these voters as Ms. Warren does.

Even as she demonstrates why she is a leading candidate for the party’s nomination, Ms. Warren is facing persistent questions and doubts about whether she would be able to defeat President Trump in the general election. The concerns, including from her admirers, reflect the head-versus-heart debate shaping a Democratic contest increasingly being fought over the meaning of electability and how to take on Mr. Trump….

These Democrats worry that her uncompromising liberalism would alienate moderates in battleground states who are otherwise willing to oppose the president….

The problem with running left in the primaries is well known. But the Times focuses on the lingering concerns about Warren’s Native American problem from an electoral standpoint:

Many fear Ms. Warren’s past claims of Native American ancestry would allow Mr. Trump to drown out her policy message with his attacks and slurs against her….

But Ms. Warren also demonstrated that she was still uncertain about how to address Mr. Trump’s taunts about the Native American heritage she once claimed. Her attempt to prove that ancestry with a DNA test last year drew fierce criticism from the right and left as well as some Native American groups; she stood by the DNA test for months, then apologized for it and the claims.

Having been told by advisers to generally avoid engaging on the issue, Ms. Warren struggled in the interview to articulate an answer about whether she would respond to Mr. Trump head-on when he uses his frequent slur for her, “Pocahontas,” or pivot to a more policy-centered rebuttal.

Many Democrats like Ms. Warren — some wait for an hour to take pictures with her — and she continues to gain supporters. But even among some of her enthusiasts, the questions about her vulnerabilities linger.

In Council Bluffs, waiting to see Ms. Warren take the stage, Herb Christensen was succinct about why he liked her — and why he worried about her as the nominee.

Warren already has admitted there could be more shoes to drop on her Native American deception. That’s a problem if you are a Democrat who, above all else, wants to defeat Trump.

LOL NYT is so funny.

guinspen in reply to notamemberofanyorganizedpolicital. | August 15, 2019 at 11:16 pm

And when she saw what she had done, she gave our country forty-one.”

It was fairly blatant fraud.

Blatant fraud, yes; but it also exposed some of the follies of the affirmative action racket.

They really have no one.

Were I to be outed after pulling this stunt, I would be embarrassed for myself, family, and friends …. and I would bury my head in shame and disappear never to make a public appearance again. Which is why I’d make a lousy politician.

Some Pipe Smoking Native Elder needs to bang a drum and sing a sacred song in her face, every day until the election. It goes with the territory.

Does anyone on the Democrat side worry even a little bit about what her “Native American problem” says about her character?

LOL your fking joking right She is a Democrat

Hmm, not viable. The forward-looking choice would be to self-abort… her campaign.

It took a while, but being the center of news coverage for months appears to be paying off.

That can be a double-edged sword…sorry, I meant double-edged tomahawk. Just like Hilliary, the more people know, the less they like.

It’s baffling to me the reaction on twitter. The general response is ‘who cares, everyone has oral history that says that, should I be blamed for believing it?’ and ‘but we didn’t have DNA testing then (when Warren claimed NA heritage on multiple documents that gave her ‘ins’ that were reserved for Native Americans.)

See, I’ve been doing research in my family histories since the mid 80’s. I studied in college under a professional genealogist before I started work on my own family. The first thing I learned is ‘never trust that your family oral history is un-garbled. It might have a kernel of truth in it but you have to do a lot of legwork to find that kernel. You dig through old microfiche. You drive out to lot of county records offices. You visit old places of worship that have records. Half the time you find out the records were destroyed in a fire. Then you find a new clue and try a new direction. For descents whose ancestors left the tribe on the trail to reservations proof of your ancestry is harder than you can imagine. But you can trace to your tribe. If you have integrity you don’t try to claim something that gives you a leg up in life without doing that footwork, and even then think long and hard before claiming it after you’ve seen the people who live on the reservation. I can take pride in my blood without taking the place of someone who might share that blood but who has seen real hardship, unlike me.

The difference between “oh shucks, I thought I had a different family history than I really did” and Warren is that Warren knew she had zero proof of Cherokee blood, yet for decades she said she was gal-darned Cherokke in order to boost her career. In reality, the closest her family history got to the Cherokee was in rounding them up for the Trail of Tears.

She’s a fraud, a disgusting human being. The fact that she is being taken seriously as a presidential candidate is a F-ing joke.

PS – kyrrat, didn’t want to give you the impression I was ticked off at what you said. My ire is directed toward people who have no integrity, which is clearly not you.

Look, I’m going to draw an analogy. Electing somebody as President is very much like loaning them your car.

-Most Republicans to this point promise a lot, but never change the oil and return it with a half-full tank.

-Democrats so far have vanished with the car to the sound of squealing tires, bring it back four years later with no gas, abandoned a few blocks from your house, with scratches and scrapes all over the body, and a bunch of parking tickets and traffic citations that show up in the mailbox for years later.

-Trump has been driving his own car like a destruction derby, so everybody was more than a little worried, particularly since he blows his horn everywhere he goes. But so far, he’s obeyed the speed limit, didn’t leave any stains in the back seat like Bill did, didn’t spray paint flames on the side like Obama, and even fixed that nagging engine problem it had for the last 8 years where it couldn’t even get up to highway speed no matter how far Obama jammed the gas pedal.

Make sense? Particularly since every Dem candidate seems to be determined to ‘Race for pinks’ the instant they get their hands on the keys, even though they can’t work a manual shift, and lost their license years ago.

Shrieking Crow has other problems. Her entire life is a lie. Slum lord, foreclosure buzzard, working for chemical companies, lying about income …..it never ends.

Everybody seems to focus on the DNA test and forgets that her original claim, that her parents were shunned by her father’s family because of her mother’s heritage, was debunked years ago. That was even before the affirmative action fraud came out. If the Dems think Tomahawk Lizzie can go toe to toe with Trump, they are nuts.

Little Fauxahontas is being picked on again,poor little Marxist Liar.

She’s a Pathological Liar ,,, that’s why the demonCraps love her !!

In other instances Warren has declined to say whether she or an assistant filled out forms.

Why would it matter who filled out the form? Warren signed the it. Why would an assistant falsify her boss’ enthnicity anyway? Pretty lame dodge.

To me, her lie of ancestry is just one of the too many lies. She’s as phony as any liberal politician. case in point she ran a distance to a mic a couple of days ago. Her ilk was tweeting you never see the president doing that. HE DOESNT HAVE TO only a pandering liberal has to do that. Omam had a routine of running up 3 seats on the podium with shirt sleeves rolled up like hed had been working hard and only too time off to talk tot he downtrodden.

When they fact-check Warren they give her Pocahontases instead of Pinocchios.

I can just see Trump walking around with a copy of “Pow Wow Chow” with the cover conveniently turned toward the cameras. Yes, it’s still in print.

But there are plenty of others:

Really tells you everything you need to know about the left and how it cares about minorities only when it suits them.

LOL, the Pocahontas nickname really worries Albert Fuddy of the democrats.
What he should really worry about is the scandal of her being on the side of big business screwing the little guys. Sure big biz is allowed to hire the best they can or the most, still won’t leave her much wiggle room when it comes to light how much she fought to screw workers.
Prof covered that a while ago, I’d bet most of the liberals have no clue about her past with big business. Can’t wait to see the side stepping that will go on once that part of her past is aired out liberally.

This is not a very nice thought about Ms. Liz “Pocahontas” Warren: I suspect she tests as a sociopath. The trail of falsehoods she’s told through out her life with no apparent personal regret, no concern for those she’s stepped on or over to get to her goals is textbook sociopathic behavior imho. As anyone seen her show real sympathy for someone, for some “victim” in her many, many public appearances? Victimology is the trademark of the modern Democratic Party after all…