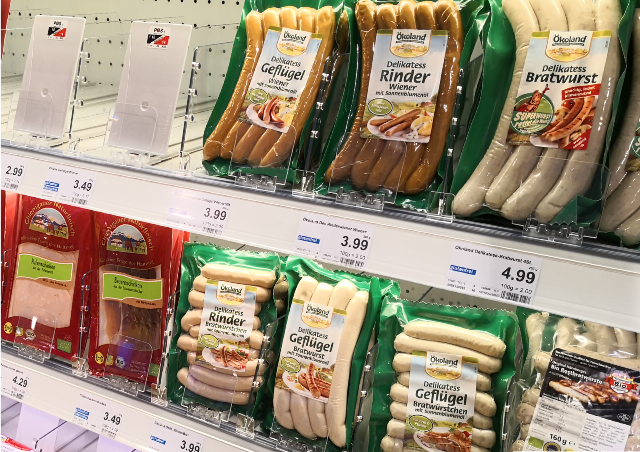 The meat tax, initially proposed by the Social Democrats (SPD) and the Green Party, will sharply increase the prices of meat products by raising the tax rate from the current rate of 7 percent to 19 percent.

The meat tax will hit poor German households the hardest. “More expensive meat might, in theory, reduce those numbers as some people cut their consumption to save money,” Reuters news agency concluded.

The radical proposal comes at a time when poverty is at its highest since the unification of Germany in 1990. Over 15 million Germans, roughly 20 percent of the population, “aren’t earning enough to pay their bills or adequately heat their homes,” a 2018 government study showed.

German politicians from the Social Democrats (SPD) and the Greens on Wednesday proposed raising the value added tax (VAT) on meat to the standard rate of 19%. Currently, meat is taxed at a reduced rate of 7% like most foodstuffs.

“I am in favor of abolishing the VAT reduction for meat and earmarking it for more animal welfare,” said Friedrich Ostendorf, agricultural policy spokesperson for the Greens.

His SPD counterpart Rainer Spieging added that “a meat tax, such as increasing the VAT to 19%, could be a way forward.”

The lawmakers proposed using the additional funds raised by the tax increase to support animal welfare in the country at a time when the meat industry is coming under increased scrutiny for how it treats livestock.

The agriculture spokesperson from Chancellor Angela Merkel’s Christian Democrats (CDU) was open to the plans. Under one condition:

“Such a tax can be a constructive proposal,” said Albert Stegemann. “However, the additional tax revenue should be used to support livestock farmers to help them restructure.”

Instead of coming to the aid of working-class Germans, Chancellor Merkel’s government has chosen to concentrate on climate change as they spend billions on migrant settlement and so-called green energy projects.

Merkel’s much-feted Energiewende, or energy transition, is expected to cost €520 billion by 2025. This transition from conventional to renewable energy generation has already resulted in spiraling costs of electricity and heating for the German household.

Her government’s open-door policy for illegal immigrants could come at a price tag of over €400 billion, Germany’s leading economists estimate. The cost of integrating the present and second-generation immigrants, who entered Germany in the wake of the 2015 migrant crisis, could rise up to €1.5 trillion, a 2016 economic study predicted.

And all this at a time when the German industrial sector, the country’s economic backbone, is in a phase of dramatic decline. In June, German industrial production suffered the worst annual decline in a decade. “German industrial output fall exacerbates fears of recession,” London’s Financial Times reported. “June figures raise concern that the largest eurozone economy is heading for contraction.”

Instead of focusing on the country’s economic woes, Merkel and lawmakers are engaging in voodoo economics. Taxing the Bratwurst or Schnitzel out of existence won’t solve Germany’s current problems.

Germany’s rulers are insane. Their not doing anything about the Muslim invasion. Their main worry is the mythical climate change. That’s going to win them a lot of votes! /sarc

Frau Führer Merkel created the Muslim invasion. I’m sure the German workers in Merkel’s Fourth Reich will appreciate foregoing their accustomed meat rations to fatten the Reich’s coffers so Frau Führer can feed her invaders.

Of the many idiocies found in this proposal, and this news item, is the inability of Germans to understand why their industrial sector is collapsing. Electricity is one of the highest cost for any heavy manufacturing plant. Industrial rates in Germany for electricity are 3 – 4 times higher than they are in Texas, for example, giving them a huge and automatic cost disadvantage. Needless to say, those industrial plants that can relocate are doing so, and those that can’t are closing down. Germany is destroying its own economy in pursuit of the ‘Green Dream”.

At least there won’t be much left when the muzzies take over. They’re going to inherit a jobless wasteland.

notamemberofanyorganizedpolicital in reply to Tom Servo. | August 8, 2019 at 5:20 pm

Texas has no major rivers, so they have not hydro-electric dams.

Don’t think they even have nuclear plants do they?

txvet2 in reply to notamemberofanyorganizedpolicital. | August 9, 2019 at 1:30 am

Among the major rivers in Texas are the Colorado, Pecos, Nueces, Rio Grande, Guadalupe, Red, and Sabine. They, and dozens of smaller rivers, feature multiple hydroelectric dams that generate a significant portion of our electricity. Canyon Dam on the Guadalupe River is the largest earthen dam in the country. And yes, we have two nuclear power plants – S. Texas, and Comanche Peak.

“Let’s double down on stupid! That will teach Donald Trump a lesson”!

BTW, tax on food should be illegal. No sales tax on groceries in Ohio. Wonder how many other states tax groceries versus those that don’t.

Agree. During the early 70’s in Washington, the people voted OUT sales tax on food. Shortly thereafter, the state legislature reinstated it while they came up with a tax plan for other goods and services to offset the loss. I’d walked to the grocery store and was checking out with a bottle of Simba soda when the clerk hit me with the sales tax and I refused to pay it. Left without my Simba. Mad. Went home and made Koolaid.

You have to admit that this happened in Washington. They will NEVER give up on any tax, and they will do their best to not do what the people want rather than what the Nomenklatura want or what will benefit them.

notamemberofanyorganizedpolicital in reply to buckeyeminuteman. | August 8, 2019 at 5:21 pm

You may be thinking of how sales taxes are “regressive.”

Texas has no sales tax on food staples.

Wait until the politicians find out that all those refuges are meat eaters and don’t like taken away.

Climate change is only the excuse. This is a wealth transfer from a demonstrably powerless class, namely low-income Germans, to the political class, for misuse as they see fit.

Obviously, the Left should be willing to make the sacrifice they demand of everyone else, so this should really be a massive tax on tofu.

After all, we *want* to eat those cows. They fart! The faster we eat them, the less chance of methane emissions, so eat a hamburger today! It’s for the planet, after all.

“I am in favor of abolishing the VAT reduction for meat and earmarking it for more animal welfare” . . .

The lawmakers proposed using the additional funds raised by the tax increase to support animal welfare . . .

“. . . the additional tax revenue should be used to support livestock farmers to help them restructure.”

I don’t see a whole lot of relevance to climate here, unless they’re hoping that contented cattle fart less, maybe.

At least the pigs are less nervous..what with the Greens, Merkel and the Muslims.

That’s because you’re reading the word “shutdown” as “restructure”. Destroy the farms and no cows contented or otherwise.

I think that the US should help Merkel with her climate change agenda and add a 25% tariff on German motor vehicles.

notamemberofanyorganizedpolicital in reply to SHV. | August 8, 2019 at 5:23 pm

BMW and Mercedes buyers can afford it!

It is a good thing meat products such as wurst and schnitzel are not popular in Germany!

For how many years did the EU/US media pass Merkel off as a uber-conservative bulwark holding off the forces of economic socialism?

Another thing on my mind? Are Germans so cruel to their household and farm animals that the federal government need to implement far ranging taxes for Animal Welfare services?

Of all the meats I love liverwurst. (Hitler was a vegetarian…I know.. another Nazi comparison)

Trying for “reply” I accidentally hit the downvote. Sorry ’bout that. Braunschweiger is my favorite liver sausage, which may be what you were writing about.

notamemberofanyorganizedpolicital in reply to Edward. | August 8, 2019 at 5:25 pm

Love Braunschweiger. Is that made with calf liver?

Old family joke….of all the meats i like liver “worst”.

I am 34 German from families that immigrated from Germany into the Midwest in the mid 1800’s.

Hitler wasn’t a vegetarian. He advocated eating less meat for health reasons, but by no means did he cut it out entirely.

Sometimes you are an absolutist killjoy!

The human body needs protein in the diet .

In the future these special nutrients will be provided by a new food made by the native Germans: Soylent Green.

T’was the best of times; t’was the wurst of times.

Next up on Merkel’s agenda: Strength Through Joy!

It’s got to be in their DNA…. Victor Davis Hanson remarked about that in the last episode of The Second World Wars from Hillsdale (donate for the DVD!). It is really a cultural thing which is going to be blunted(?) by hopeless immigration. Prussian mindset, military action in WW1 and WW2. Only problem for Brexit is German influenced EU military in Scotland right up against England’s border and also in Ireland. Just be glad Germany doesn’t have nukes (yet).

“The Hun is either at your feet or at your throat.” popularly attributed to Churchill.

The Plan circa 2019… USA out, Russia in, Muslims in, Germany up. What could possibly go wrong?

If Germany stopped all carbon emissions other than the CO2 from breathing, Germany still wouldn’t make a minuscule contribution to eliminating the mythical Anthropogenic Global Warming/Climate Change/whatever the current favorite term might be.

Then go the extra kilometer and make them stop breathing. 😉 It’s for Mutter Gaia.

notamemberofanyorganizedpolicital in reply to Edward. | August 8, 2019 at 5:28 pm

But I thought plants LOVE CO2, and made oxygen of it.

Guess the Fourth German Reich has something against organisms that breath oxygen……….

alaskabob in reply to notamemberofanyorganizedpolicital. | August 8, 2019 at 8:49 pm

So did the Third….

I admit I am at the point where the only reaction is amusement.

If they raise the tax on meat, it might trigger a political revolution. With Germany a lost cause as is, that would be a good thing.

If they do not revolt, a) they deserve what happens to them, and b) they will be protein starved if we do have to deal with them again.

Is that black meat market? Or meat black market? Hmmm .

Germany is no ally, Merkel is a fascist.

These Greens are nuts!
As if reducing the meat intake for 10-20% of Germans (that’s 8-16 mm people, 0.114% of the world population) is going to make any measurable difference in the amount of CO2 in the atmosphere—even if they’re correct about this debatable link to a debatable phenomenon. It’s all about virtue signaling, and nothing more.
(That’s virtue signaling by their upper-middle class, to the detriment of the poor they profess to love so dearly: isn’t social democracy just great?)

We are way ahead of this. We dedicate 1/4th if corn production to ethanol. Bacon i too expensive.