German newspaper Die Tageszeitung: “The first payments are under way” to Iran as part of the EU’s new trading mechanism. 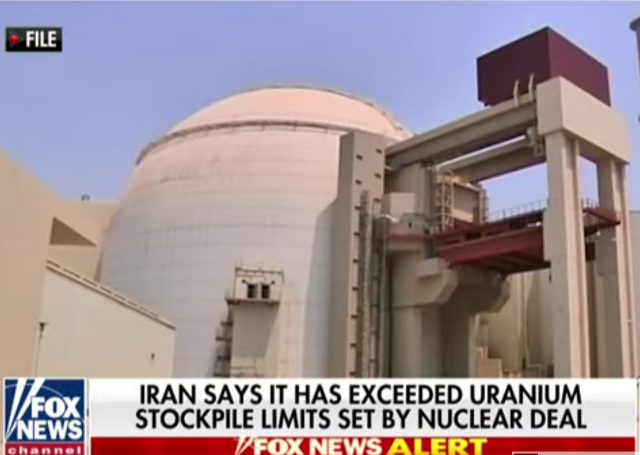 As Iran breaches the limit on its enriched uranium stockpile set under the 2015 nuclear deal, European powers scramble to appease the regime.

The European Union has started processing payments to Iran under a new trading mechanism, German media reports confirmed. While French President Emmanuel Macron is expected to rush to Tehran in an attempt to coax the regime into the Obama-era deal.

The United Kingdom, Germany, and France will issue a joint statement today underlining their approach in light of the latest Iranian breach, British newspaper The Guardian reported.

“The Trump Administration calls on the international community to restore the longstanding nonproliferation standard of no enrichment for Iran’s nuclear program,” Secretary of State Mike Pompeo said. “[N]o nuclear deal should ever allow the Iranian regime to enrich uranium at any level.”

While Pompeo sought allied support, the European Union hussled to the aid of the Iranian regime. Brussels, backed by Germany, the UK, and France, rewarded Tehran’s belligerence by launching a new trade mechanism to protect the EU’s Iran trade from the U.S. sanctions.

“EU mechanism for trade with Iran ‘now operational,'” German public broadcaster Deutsche Welle confirmed. “The move is an attempt by EU countries to show they are serious about alleviating the pain of sanctions on Iran in order to convince Tehran to remain in the 2015 … Iran nuclear deal.”

Deutsche Welle explained the workings of the EU-Iran trading mechanism:

The new EU mechanism will coordinate import and export payments so that cash between partners need not be handled by banks, thus avoiding the risk of drawing Washington’s ire.

INSTEX will create a virtual ledger to offset balances. Thus payments will be exchanged between EU companies importing and exporting to Iran, and the same will happen on the Iranian side. Thus, all sides will be able to complete transactions without euros going to Iran, or rials to Europe.

“France, Germany, and the United Kingdom informed participants that INSTEX had been made operational and available to all EU member states, and that the first transactions are being processed,” the EU declared in a statement.

In the past, the U.S. Treasury Department has condemned the EU payment mechanism, which seeks to boost the Iranian oil trade largely controlled by regime’s Islamic Revolutionary Guard Corps (IRGC), as a tool for money laundering and terrorism financing.

Iran could further escalate nuclear tension to extract more economic concessions from the EU. “Further breaches could follow as Tehran seeks help in increasing trade with Europe,” British newspaper The Guardian reported. Iran’s breach of the nuclear accord “will put pressure on Europe to do more to help mitigate the effect of crippling US sanctions,” the newspaper added.

The Guardian detailed the new measures taken by the European leaders to placate Tehran in the wake of nuclear breach:

Monday’s move reflects Tehran’s exasperation that EU states have been unable to do more to counterbalance the effect of US sanctions.

The UK foreign secretary, Jeremy Hunt, said he was “very worried” by the Iranian move, but he did not refer to any plan to activate the deal’s formal dispute resolution mechanism, a staged process that could end with EU sanctions being reimposed in as little as 65 days. He said in a tweet that the UK “remains committed to making [the] deal work and using all diplomatic tools to de-escalate regional tensions”.

A joint statement from the EU signatories to the deal – France, Germany and the UK – is likely within 48 hours.

European leaders had urged Iran not to breach the deal, but the focus may now be on dissuading Iran from taking further, more serious steps away from the terms.

One proposal is for the French president, Emmanuel Macron, to travel to Tehran, but there are also plans for a joint commission meeting at foreign minister level bringing together Iran and the other remaining signatories – Russia, China and the EU three.

Israeli Prime Minister Benjamin Netanyahu urged the European leaders to impose sanctions on the regime as it races towards a nuclear weapon. “On this day I also call on all European countries to stand behind their commitments. You committed to act the moment Iran violates the nuclear agreement, you committed to activate the mechanism for automatic sanctions that was set in the (UN) Security Council,” the prime minister’s office said in a statement.

“I say again that Israel will not allow Iran to develop nuclear weapons,” added Netanyahu.

Since Iran sighed the nuclear deal almost four years ago, the European countries are fully aware of the regime’s attempts to expand its nuclear weapons program in direct violation of the accord. German Intelligence services have repeatedly uncovered Iran’s efforts to acquire Western technology and components to build up its nuclear weapons capabilities.

Despite the lucrative Obama-era nuclear deal, which gave Iran access to billions of dollars in frozen funds and a fresh infusion of Western investment, the regime has kept up the campaign of terrorism and espionage against the European countries.

Germany, France, and the UK have chosen to ignore their intelligence to keep the fiction of Iranian compliance with the nuclear deal intact. Instead of penalizing Iran as it rushes towards a nuclear weapon, the leading European powers are throwing an economic lifeline to the regime. Watching Germany leading the European effort to appease the Islamic tyrants in Tehran, shows how little Europe has learned from its recent past.

If a company does business with Iran, sanction that business’s country to the max. The Europeans have to decide if they want to be on our side or the Iranian’s’ side. If they choose Iran, punish them severely.

Certain parts of Iran need to be slagged. It’s the only way they’ll understand the consequences. I’m not saying invade, I’m not saying send planes, send precision stand off weapons to let them know we really care.

Iran knows these knuckle-dragging leaders will capitulate. It’s like watching a 2-year-old manipulate their parents.

The ghost of Chamberlain and his Munich Appeasement of 1938 has come back to haunt Europe – in spades.

European powers scramble to appease the regime
———————————
Deja BOO BOO all over again. Bernie would probably offer Iran Medicare for All if he was elected.

The president should withdraw from NATO if our allies have actually activated INSTEX as a way to circumvent our sanctions on Iran. This is not how allies act.

Exactly. NATO Has outlived its usefulness. The U.S. should no longer subsidize their defense, especially if they are circumventing sanctions and playing footsie with Iran. And while he’s at it, President Trump should get the U.S. out of the U.N., and the U.N. out of the U.S.

NATO is tough…if it gets cut, then domestic political enemies of the liberal persuasion will use it to further justify cuts to our military. It shouldn’t be that way as both should be working towards a strong defense, but we know that we have serious traitors in our midst and in power.

Jeremy Hunt claims he might-kinda-sorta Brexit by the end of September after exploring the EU’s intentions (as if things might change) – while at the same time he remains committed to Germany and France’s anti-American sanction busting no cash “barter” scheme. It’s a grift. Pure and simple.

The notion that France, Germany and Perfidious Albion will stick to bartering western humanitarian aid/food for Iranian oil is laughable. They pulled this same stunt not twenty years ago, got caught red handed trading high tech goods, and were sanctioned for it by an EU court.

Lets get this straight. Hunt is Theresa May in a blue business suit. Macron is ‘peace in our time’ Neville Chamberlain. And the avaricious Krauts, to quote Churchill are either, “at our throats or at our feet.”

notamemberofanyorganizedpolicital in reply to Tiki. | July 2, 2019 at 5:02 pm

Time to Sanction Continental EU back to the Stone Age.

Back when this deal was in the works – I posted on several progressive web sites (puff host )that the deal will facilitate the acquisition of nuclear weapons.

The responses demostrated the detachment for reality – as if they never heard of the munich accord.

I try to give even Iran the benefit of the doubt, but when it cries foul about people trying to stop it from having Highly-Enriched Uranium for its own legitimate domestic power-generation needs, and I know that no such thing exists, not just for Iran but for any other nation on the face of this Earth, I get jaded.

So Iran wasn’t in violation at all when Trump unilaterally nixed the deal? And only breached it when it had already been nullified?
I guess like Iraq, killing a half million Iranian children will be “worth it” to the neocons here.

Iran violated the agreement at the start when they were supposed to report the status of their nuclear program and lied. According to Obama the sanctions are supposed to be snapped back into place. Another Obama lie!

Great Britain, France, and Germany need to be added to the list with Iran. Stupid, gutless traitors. Do they really think their appeasement of Iran will accomplish anything of consequence? Hoping their destruction will be last.

OH YES!!! lets arm the REST of the LUNATICS in the world W/A-bombs/ H-bombs and all the chemicals we can. YES! let us race to the END by ALL MEANS!

The Europeans are a bunch of disgusting moochers–and have been for years. As. for the French, if you have them for allies you have no need for enemies. Both DeGaulle and Macron have made no secret of their hatred for the U.S. And the French have for years been successful in blocking the opening of European markets to American agricultural products.
I spent two semesters as a visiting professor in Germany–and let me tell you that despiite all the honeyed words about the new Germany, the German character remains the same–arrogant, grasping, in a relentless pursuit of power. As for Britain, its collapse into hopeless irrelevance under the current government is tragic–and even worse is ahead with a dark red Labour Party. The time is long past for the termination of NATO–and return to American historical policy of bilateral arrangements with individual countries.

The Iran deal is a fig leaf for the EU and formerly the US to allow Iran to become nuclear without having trying to have every excuse they need to pothers they tried to stop it.

as they have said repeatedly, a nuclear iran is not a concession the israelis will ever be willing to make

It occurs to me that Iran just took the opportunity to declare they are over the limits and got out of the way. ( Which I believe they accomplished some time back )
Now I am wondering how this is to affect the parties which are still honoring the agreement.