Chancellor Merkel: “We take these acts very seriously, there is strong evidence.” 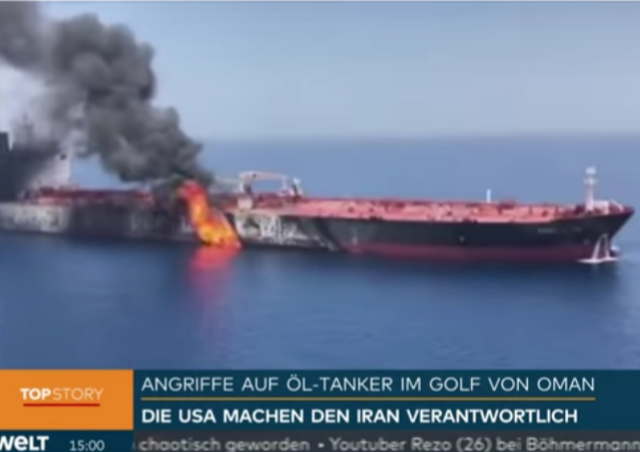 In a major shift, Germany has acknowledged Iran’s involvement in the last week’s attacks on two tankers in the Gulf of Oman. German Chancellor Angela Merkel declared that their was “strong evidence” that Tehran was responsible for the attacks on the tankers.

Last Thursday, a Norwegian-owned and a Japanese-owned oil tanker were attacked in the Strait of Hormuz shipping lane. A mine had struck the Japanese vessel, while the Norwegian one had been set on fire. The US Navy came to the rescue, evacuating the crew of the damaged tankers.

Chancellor Merkel’s comments are in response to the video footage released by the United States showing an Iranian patrol boat removing an unexploded mine from the damaged Japanese tanker.

German Chancellor Angela Merkel said Tuesday there is “strong evidence” Iran was behind the twin tanker attacks near the strategic Strait of Hormuz. (…)

Speaking at a news conference in Berlin alongside Ukrainian President Volodymyr Zelenskiy, Merkel called for a peaceful solution to tensions in the Persian Gulf.

“We take these acts very seriously, there is strong evidence,” she said, referring to the US allegations that Iran was behind the attacks on the two tankers.

“It is a very serious situation,” she said, adding that Germany would tell all sides and especially Iran, “that the situation should not escalate.”

German admission signals a shift in the European stance. EU foreign policy chief, Federica Mogherini, has been telling European countries ‘not to jump to conclusions’ about Iran’s involvement. Earlier this week, German Foreign Minister Heiko Maas questioned the U.S. intelligence saying that so far the evidence was only coming “from one side in particular.”

With Chancellor Merkel’s latest statement, German government now agrees with the U.S. assessment that Iran was behind the tanker attacks on the high seas. Berlin has been Iran’s biggest backer in the West since Washington pulled the Obama-era nuclear deal last May.

Despite Chancellor Merkel’s admission, little may change on the ground with regards to Germany’s support for the Iranian regime. Berlin is still working on a ‘special purpose vehicle’ to protect Iranian oil trade from U.S. sanctions. The EU-backed payment system will be devised to hide the Iranian money trail and protect European companies from prosecution under the U.S. law. Trump administration has called it a mechanism for laundering money and financing Islamic terrorism.

With the economy failing in wake of the stiff U.S. sanctions, Iran has set a July 7 deadline for the Europeans to deliver on the financial benefits promised under the Obama-era deal. Last week, German Foreign Minister Maas rushed to Tehran to appease the angry Mullahs. “Heiko Maas spearheads effort to reassure Iran’s leaders of economic payoff for sticking to agreement,” The Wall Street Journal noted.

Tehran received billions of dollar under the Obama administration for signing the 2015 deal. Those massive reserves seem to have dried up in the subsequent Trump years.

Trump bashing was so much easier to do, than confronting reality.

Time to put iran in its little place.

Now is a good time to knock out all their hydroelectric and water reservoirs. Too much water followed by not enough water. Then drop leaflets telling the Iranian people that they need to put all the Mullah’s heads on pikes.

Then we can talk about peace, and if that doesn’t happen, they can receive a lasting peace.

LOL….remember all of the youtube commenters screaming that this was a false flag operation by Israel. I’m sure Germany is in on that one, you idiots!

I think that mainly Bernie Sanders and his buddy over in England, Jeremy Corbyn. They always imagine Jews hiding in the shadows everywhere they look.

Also, this is a major misstep by Iran. Germany was in their corner, but leave it to those fuming, delusional idiots to bite the hand that feeds.

“Tehran received billions of dollar under the Obama administration for signing the 2015 deal. Those massive reserves seem to have dried up in the subsequent Trump years.”

Talk about government waste….there should be a monetary penalty on all of those frozen assets to cover the costs of Iran’s bad behavior.

German Foreign Minister Heiko Maas questioned the U.S. intelligence saying that so far the evidence was only coming “from one side in particular.”

Yeah, so where were they?
So far as I can tell, we were the only ones out there to observe it.

I have suspected that the threats of war are just to remind countries like Germany that they need to honor the economic sanctions. Maybe to give cover for sanctions after Germany said they wouldn’t honor sanctions.

Anyway, it is difficult to determine what faction(s) in Iran are forcing a belligerent foreign policy. If you don’t know that, you don’t know what kind of pressure might work.

Or maybe Germany wants calm because that was a Norwegian tanker and Norway is a founding member of NATO. Having to go into any kind of conflict would reveal to the world just how badly Frau Merkel has devastated the Germany military. Might as well fight with toy soldiers from what I hear.

I believe that Iran already has exceeded the limits on enriched uranium and in all probability has enough for a bomb right now. Of course we won’t know for certain until they set one off or we find it after a messy little police action (like Vietnam).

In the end, we have the ability to quickly transform Iran into a large glass parking lot, and then use it to store spent nuclear materials.

Fair enough, Frau Bundeskanzlerin. You take these acts very seriously. Now, what are you going to do about it? Ah yes, nothing. That’s what I thought.

The Iranian terrorists only have one card left to play, the shipping, which scares the europeans.

But we hold the Trump card, and they know it.

Tell me one more time why we don’t leave Germany and let the other commies have it.

Because if we do that we can’t help the Poles, who deserve our help. We need the strategic depth.

Uh Steve, you really think the Poles need or want help from the Germans?

No, of course the Poles want as little to do with Germany as possible. However, we have a huge infrastructure in Germany – Thein Main Airbase, medical facilities. port access in Bremerhaven. It is far easier to fly men and materials in to Rhein Main or ship them into Bremerhaven than it would be to get them into Poland with landing rights in Germany

Assume a major dust-up between Poland and Russia. In that situation, if Germany was not an active ally we would not be able to help the Poles. If Germany closed its air space and territorial waters we’d not be able to get people, supplies, etc. into Poland in any meaningful way, and certainly not in time. Germany wouldn’t even have to “take sides”, they would just be “neutral” and the Poles would be screwed.

As Granny points out, Germany also has a lot of facilities, bases, etc. that are very useful to us in the defense of central and eastern Europe.

What do you think the Germans are going to do to us for violating their airspace if they were to close it?

We don’t need Germany to help Poland. A war with the former Soviet Union is not going to be fought with tanks and rifles.

I’d close every base in germany, tomorrow since today is about over. When the germans take their own defense seriously, spend the money required including that in arrears, we’ll talk. Until then they are nothing but leaches.

I’ve spent considerable time in germany. I have uncles that were stationed there for something close to 40 years total. Germany is a lost cause.