56% respondents believe the problem will only get worse.

We have witnessed the mainstream media collapse due to Trump Derangement Syndrome, but I have also seen people on Facebook share supposedly conservative news that is also not true.

Fake news has made it hard to trust the news. Who do we believe? What do we believe? If we do not have faith in the press to tell us the truth, where will we go?

It has become an actual problem. The Pew Research Center discovered that Americans believe fake news is more of a problem than terrorism, climate change, and illegal immigration.

Indeed, more Americans view made-up news as a very big problem for the country than identify terrorism, illegal immigration, racism and sexism that way. Additionally, nearly seven-in-ten U.S. adults (68%) say made-up news and information greatly impacts Americans’ confidence in government institutions, and roughly half (54%) say it is having a major impact on our confidence in each other.

U.S. adults blame political leaders and activists far more than journalists for the creation of made-up news intended to mislead the public. But they believe it is primarily the responsibility of journalists to fix the problem. And they think the issue will get worse in the foreseeable future.

The vast majority of Americans say they sometimes or often encounter made-up news. In response, many have altered their news consumption habits, including by fact-checking the news they get and changing the sources they turn to for news. 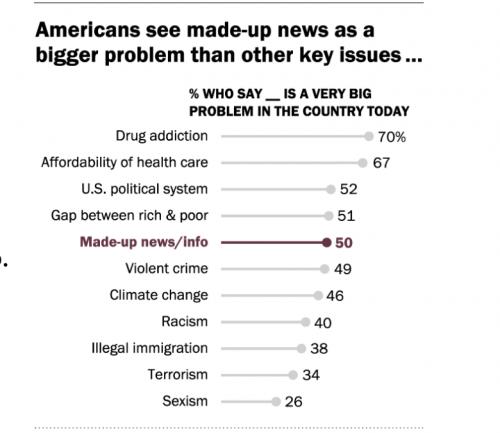 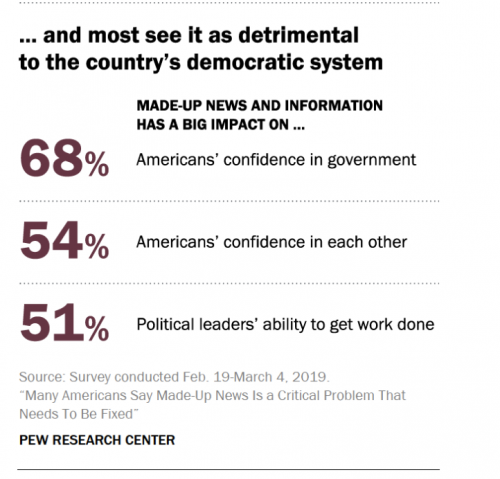 Pew found that “Republicans, the highly politically aware and older Americans” view fake news as a problem more than any other group, which I find odd because those are the people I see sharing unreliable “news” on Facebook. I will not name names!

Most of these people do not think the fake news issue will get better anytime soon. 56% of the respondents believe fake news will get worse in the next five years. 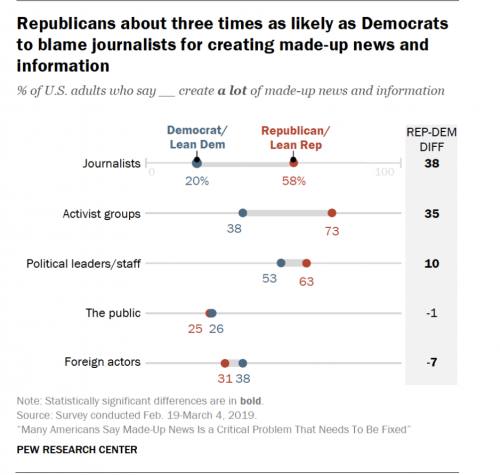 I found it odd that the majority of respondents placed the fake news blame on political leaders (57%) and political activists (53%). Journalists came in third at 36%. I have documented the many times I found fake news within the media. Professor Jacobson allows me to go ginger on them. 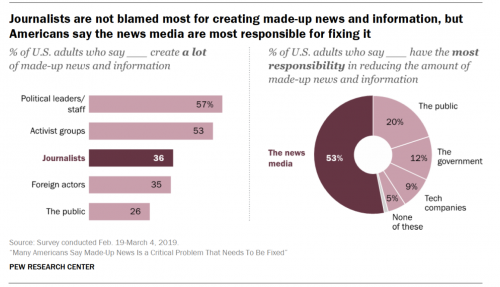 Despite that, 53% of Americans believe that journalists “have the greatest responsibility to reduce it.”

Duh. That is the primary job of the free press. We rely on journalists to provide us the truth, ask questions about any corruption, and demand details.

If the press will not do it, then who will? We saw an explosion of online blogs and media outlets during President Barack Obama’s administration due to a loss of trust in the press. Professor Jacobson stresses accuracy in our blogs, but unfortunately, that is not the norm everywhere. Americans admitted to Pew they shared fake news but did not know it was fake when it happened:

A somewhat larger percentage of those surveyed (20%) say the public itself bears the most responsibility to reduce it. But another finding suggests the challenges inherent in that effort. Of the 52% of Americans who say they have shared made-up news themselves, a vast majority of them said they didn’t know it was made up when they did so.

Almost four-in-ten Americans (38%) say they often come across made-up news and information, and another 51% say they sometimes do. Given their concerns about made-up news, Americans have also changed their news and technology habits. Almost eight-in-ten (78%) say they have checked the facts in news stories themselves. Roughly six-in-ten (63%) have stopped getting news from a particular outlet, about half (52%) have changed the way they use social media and roughly four-in-ten (43%) have lessened their overall news intake.

Half say they have avoided talking with someone because they thought that person would bring made-up news into the conversation.

I have seen people get on President Donald Trump for using the term “fake news,” but in all honesty, if the outlets and people did not push fake news, then he would not say it all the time.

I encourage people to watch all of Trump’s speeches in full so they do not encounter any doctored videos from any outlet or person. Also, remember that every outlet has great reporters. Do not allow the rotten apples to affect your view of the entire outlet.

“Pew found that “Republicans, the highly politically aware and older Americans” view fake news as a problem more than any other group, which I find odd because those are the people I see sharing unreliable “news” on Facebook. I will not name names!”

Mary, think for a second.

What credibility do you lend to those articles shared by those people? They are joe blow nobodies.

What credibility do you perceive big media outlets like CNN, FOX, MSNBC, and even the AP having? That’s the problem here is the credibility behind the different sources of “fake news”. Our world of information has been slanted in different directions in a criss-cross fashion by those with the most power to influence it.

Bottom line when journalists became activists and readily traded their credibility for their embraced causes and beliefs, things got really messy.

Once upon a time journalists believed in their credentials more than their own personal feelings. That has changed, especially on the left.

I don’t know when that “once upon a time” ever was. You can review “journalism” as far back as Rome and Greece, and they all write to an agenda. Professional liars.

“I hate newspapermen. If I had my choice I would kill every reporter in the world, but then we would be getting dispatches from Hell before breakfast.”

Sherman was concerned because all reporters, honest or otherwise, are functionally spies. They’d go into a Union camp and merrily report everything they could find out, and the Confederacy would know it all within a few hours—numbers of troops, dispositions, supply situation, battle plans . . .

Of course, newspaper spying worked both ways. When Sherman cut his supply lines and vanished with some 80,000 men into the Georgia hinterland, Washington could keep track of his progress toward the coast by reading reports of his army’s “imminent destruction” in the Southern papers, complete with locations and maps. This news was so reliable that when Sherman finally reached the Atlantic, a gunboat dispatched by Grant met him there, and delivered dispatches, new orders, and a supply of cigars.

Touche, fitting then that “Once upon a time” is a popular opening phrase for works of fiction.

What we have had in the US for my entire adult lifetime (and even before I was born) is a far Left media monoculture that created the illusion that journalism was being run by dedicated, non-partisan people. If you ever saw broadcasts from the 1970s and 1980s they were as predictable (and as boring) as a meeting of the Soviet Central Committee. A group of aging white communist males bloviating on topics they knew absolutely nothing about – happy, happy, joy, joy.

Today’s media broadcasts are run by hot-tempered Khmer Rouge wannabes compared to the ossified geriatric Pravda denizens of several decades ago, but they are just as predictable and boring (and dishonest).

I finished Grant by Ron Chernow(great book) a couple of weeks ago and have William Tecumseh Sherman In the Service of My Country by James Lee McDonough sitting next to it waiting to be read. In reading American and World History it is apparent to me that there was never a time when activist & tabloid journalism did not rule the day.

There were only periods of time when our sources of information were limited and nostalgia tainted by the false belief that the downward spiral of integrity is just a contemporary trend.

It is the same as it ever was…

True Paul. Historically, newspapers made no bones about not being impartial. It was until more recently, they began to claim to be impartial, even as they spun tales to protect their clients. Wilson, as i recall, prosecuted newsies for not toeing the party line. Perhaps that’s where the myth started. Folks believed it and now as they’re outed again by talk radio at first, then the internet sources, they’re still pretending.

It’s not just the credibility but also the reach. The broadcast networks have an incredible reach in terms of “eyeballs”, absolutely dwarfing cable. The prog liars are not only considered more ‘reputable’ but they also reach many orders of magnitude more viewers.

Hopefully this is true.

But like the left’s “fake news,” there is their “fake polls.”

It’s all b.s., as is our justice system after 8 years of that scumbucket obama, and the GOPe rats who profited from his treason.

The questions omitted the issue of deficit spending and national debt. Crushing debt is the biggest threat but neither political party seems to know or care.

One major difference is that the conservative websites are usually quick to correct their errors whereas the liberal leaning websites double down on the errors & mispresentations.

It’s up to readers to do their own due diligence about this stuff. You can’t just be lazy and blindly believe anything you read. At reddit on T_D, we do a pretty good job policing each other of fake news stories.

Also, remember that every outlet has great reporters.

With all due respect, MC, please name names.

For proof that journalism is completely biased I offer the example of Chris Wallace.