After being called out, NPR undermines its own story in Editor’s Note: “Trump Jr. did not address what Cohen has now admitted” 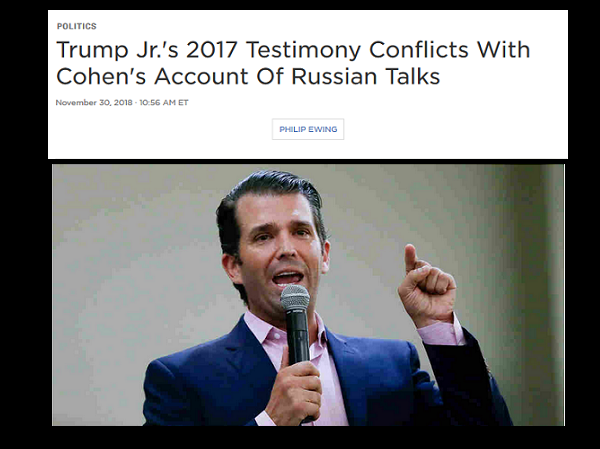 NPR posted the type of “scoop” story that has become common among journalists trying to out-do each other in going after all things Trump: “Trump Jr.’s 2017 Testimony Conflicts With Cohen’s Account Of Russian Talks.”

The point of the story, however, was premised on a clear misreading of the transcripts because there is no conflict between the testimonies of Donald Trump, Jr. and Michael Cohen.

After being called out on their error, NPR changed the article’s title to “Cohen’s Account Of Russia Talks Raises Questions About Trump Jr. 2017 Testimony” and added an “Editor’s Note” to explain that there is no there there . . . yet the story is, as of this writing, still live on NPR’s site and without a full retraction.

Mollie Hemingway and Sean Davis at The Federalist led the charge in debunking the NPR story.

Hemingway wrote at The Federalist:

NPR falsely claimed that Donald Trump Jr.’s testimony before the Senate Judiciary Committee in September 2017 conflicted with an account given by a former attorney for President Donald Trump.

Here is NPR’s false write-up of that testimony:

Trump Jr. told the Senate Judiciary Committee in September 2017 that although there had been negotiations surrounding a prospective Trump Tower in Moscow, they concluded without result ‘at the end’ of 2014.

‘Certainly not ’16,’ he said. ‘There was never a definitive end to it. It just died of deal fatigue.’

Trump’s account contrasts with the new version of events given by Cohen on Thursday in a guilty plea in federal court. In that new version, Cohen says the discussions with at least one Russian government official and others in Moscow continued through June 2016, well into Trump’s presidential campaign.

In fact, Senate investigators were asking Trump Jr. about a series of efforts to develop property in Russia, going back several years. Reporter Phil Ewing (reporter Tim Mak contributed to the story) conflates one of those efforts with another separate effort. That conflation results in the false news report.

A full 100 pages before the portion Ewing quotes, Trump Jr. explicitly contradicts NPR’s false claim when he gives a clear answer to the following question:

Q. It’s been reported that in late 2015 or 2016 when now President Trump was running for office the Trump Organization was pursuing a plan to develop a massive Trump Tower in Moscow. Is that accurate?
A. Yes.

A hundred pages later, the investigator asks if there was an effort by Felix Sater to “bring together a development in Moscow.” Trump Jr. says he believes there was an effort to work on that with Cohen in 2015. Asked if he knew about the deal, he says not much, but that it got to the point his father signed a letter of intent. He said he would provide a copy of that letter. Trump Jr. says he was aware of this deal “peripherally.”

The transcripts give lie to the NPR story, making it a clear example of the type of #FakeNews that President Trump decries.

Once you see the transcript, which NPR presumably had since they quoted from it, it's really, REALLY hard to see how this happened. The entire premise of the story—which is still posted, btw, just with a slightly more cautious headline—was false. https://t.co/btmVCHoNrW

The story’s author, Phil Ewing, claims that he simply misread what the transcripts said.

I misunderstood the material in our transcript story today and it has been updated with a correction. Thank you to everyone who pointed out the issues. I made a mistake and the responsibility was entirely mine.

As is obvious from the context, the quotes Ewing used weren’t about the Cohen efforts, but the Agalarov efforts.

What makes Ewing’s error so surprising is that the very next two lines make abundantly clear that the discussion is not about the Cohen efforts but the Agalarov efforts. Here’s a brief exchange with Trump’s attorney:

Q. How did that deal first come about?
MR. FUTERFAS: Which, just for clarification?
MR. PRIVOR: The Agalarovs in 2014.

This NPR story appears to be wrong. It notes that Trump Jr. told a Senate committee that a deal in Moscow died of "deal fatigue" by 2014.

But that was a deal with the Agalarovs. He was also asked if a deal was in the works in 2015/2016 and said yes.https://t.co/B8SuolTfyK pic.twitter.com/w34SamzXJF

Rather than pull the story and issue an apology, NPR chose to retitle it and add the following Editor’s Note:

Editor’s note: An earlier version of this report mischaracterized an answer Donald Trump Jr. gave to Senate investigators in 2017 about the prospective projects his family was negotiating with people in Moscow.

The story reported that Trump Jr.’s response — that negotiations on one project concluded by the end of 2014 — contrasted with the version of events as laid out in the guilty plea by Michael Cohen on Thursday. In fact, Trump Jr. and investigators were alluding to a different set of negotiations — not to a deal that Cohen was reportedly pursuing. Trump Jr. did acknowledge in his testimony that Cohen and another man were exploring a possible deal in Moscow in 2015 or 2016.

Trump Jr. did not address what Cohen has now admitted — that talks about such a deal continued at least into June 2016, longer than previously known and well into the presidential campaign. [Emphasis mine]

So wait, “Trump Jr. did not address what Cohen has now admitted — that talks about such a deal continued at least into June 2016, longer than previously known and well into the presidential campaign,” but NPR is still saying that Cohen’s account “Raises Questions” about Trump Jr’s testimony . . . about something else entirely? How does that work?

So why does #FakeNews matter? Because it is spread by unthinking and/or agenda-driven people who don’t really care about the truth or whether or not what they are spreading is fact or, as in this case, pure fiction.

A good lesson for all kids (and for anyone in the White House): the truth always comes out. https://t.co/ox7kMjs65c

Now you might think that Schindler, upon seeing that NPR’s original tweet had been deleted (viewable here via archive.is), might note this. But no, in the cascade of anti-Trump vitriol that follows this tweet, Schindler, as of this writing, makes no mention at all of NPR’s fakery.

But the damage is being done:

While Trump Jr. is pushing back, the #FakeNews will take hold and become “truth” for the Trump Deranged.

You were saying senator??? Please correct this immediately so you aren’t misleading many people now that even NPR corrected their sloppy attempt to smear me. https://t.co/dm8np9RIcN

We have deleted an earlier tweet that mischaracterized an answer Donald Trump Jr. gave to Senate investigators. See below for our full editor’s note. https://t.co/qywUjrs57b

Yet the story, now without any foundation at all, remains and without a full retraction.

This is the part that gets me, too, Bucky. Our tax dollars are funding NPR via @CPBmedia. More info here: https://www.cpb.org/

It’s one thing when crazy CNN or MSNBC posit their endless stream of fake news, but when it’s NPR, we are paying for it. Unconscionable.

Remember, that drunk rino rat boehner had the opportunity to defend this government-funded leftist sewer, but capitulated. (Of course he did.)

Why isn’t the executive branch re-staffing NPR and PBS?

How Public Is NPR’s Funding?

Because it can’t. The government has no control over NPR, and as your own source points out, although a lot of taxpayer money finds its way eventually to NPR very little of it comes directly as a federal government grant, so there’s very little that can be cut off.

Even $0.01 is too much and needs to be eliminated, along with the sham CPB. The Dallas “public television” station, as I’m guessing is true of many, if not all, devolved into running the equivalent of commercials with much of their programming plus the insufferable week long “pledge weeks” through the year. I don’t watch PBS nor do I listen to NPR, yet some minute amount of my taxes are being sent to support these entities.

minute amount is being sent.

I’m glad that the lie was exposed so quickly but this isn’t news any longer. This is the crap that is called news! No one bothers to fact check anything anymore and it is with the blessings of the editors. As long as it is negative for Trump then it goes to print/air. These fools in the msm don’t seem to realize that their days are numbered and that Americans are fair-minded people. Eventually, even anti-Trumpers will be revolted by their lack of ethics and professionalism.

And as pointed out by others, these ‘errors’ only happen against anyone with an ‘R’ after their name.

“The House of Representatives and the Senate overwhelmingly passed legislation allowing Obama to grant permanent normal trade relations, or PNTR, to Russia in order to ensure that U.S. companies share the full benefits of Russia’s recent entry in the World Trade Organization.”

NPR, 2018: Evil orange man attempted to do business with Russia!

“NPR falsely claimed that Donald Trump Jr.’s testimony before the Senate Judiciary Committee in September 2017 conflicted with an account given by a former attorney for President Donald Trump.”

There is no underlying crime to any of this process. Only perjury traps. WE’RE BEING PLAYED, PEOPLE!

So many questions. Worse than Hitler!!!!!

Cohen is not CPL.

I get up very early and should have coffee before I post. Still, the point is still valid.

What is most sad, and upsetting, is that this nonsense will end, will only get worse, and the end result of all this is the internal destruction of America…..it is going to get really ugly.

What is sad and upsetting is that an American citizen can be forced to testify about his involvement in a perfectly legal activity with the hopes of a contradictory story by a disgruntled former employee can be used as a basis for prosecution.

What is worse is having committed no crime but yet getting trapped for lying due to a clever, politically-driven “special prosecutor”. The investigation IS the crime.

This is when I kinda wish it was easier to sue media companies for doing this.

It’s either a flat out lie or extreme incompetence but there are no real consequences for it because the media practically can’t be touched thanks to previous court rulings.

I don’t think the First Amendment should protect media companies to this extent.

It doesn’t protect media companies more than it does everyone else.

Have you ever been involved in any litigation involving the media? In my experience, they are given a shocking level of deference and treated with kid gloves by the courts.

Maybe, but there’s not even a hint of such a thing in the first amendment.

C’mon Milhouse. You aren’t enough of a naif to believe that the Federal Courts actually use the Constitution as the ultimate law of the land (hint, as evidenced by the Fourth Circuit giving the SCOTUS Heller decision a big FU in the MD “Assault Weapon” case). Next you’ll be telling us that there are no Obama/Clinton/Bush/Trump Judges, just Judges trying to do their level best to administer the laws completely and fairly to everyone.

Leahy is one of the dimmest bulbs in the swamp, he can’t comprehend the real story.

Leahy isn’t stupid, he knows exactly what he doing in smearing anyone named Trump