Featured on cover of Time mag and widely shared on social media. 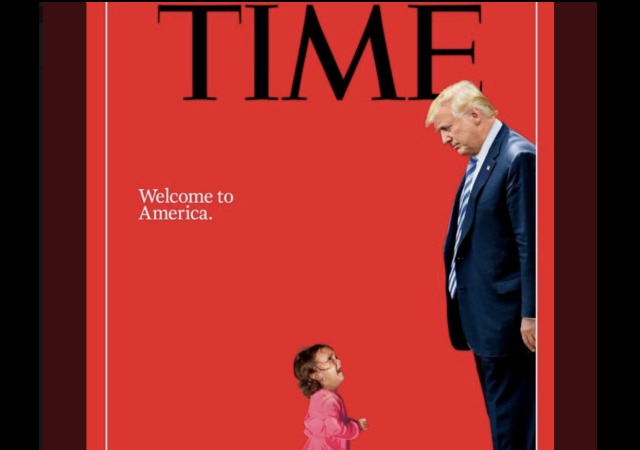 If the media wants President Donald Trump and others to stop calling them fake news then they need to stop being fake news.

A Getty photographer snapped a picture of a crying girl a few weeks ago and became the go-to image for the border fiasco. Time used the picture on its cover to bash Trump, but the girl’s father said that the child and her mother were never separated.

In fact, he told The Daily Mail, “They are safer now than when they were making that journey to the border.”

In an exclusive interview with DailyMail.com, Hernandez, who lives in Puerto Cortes, Honduras, says that he was told yesterday that his wife and child are being detained at a family residential center in Texas but are together and are doing ‘fine.’

‘You can imagine how I felt when I saw that photo of my daughter. It broke my heart. It’s difficult as a father to see that, but I know now that they are not in danger. They are safer now than when they were making that journey to the border,’ he said.

Denis said his wife and daughter were never separated by border control agents and remain together.

He revealed that his wife had previously mentioned her wish to go to the United States for a ‘better future’ but did not tell him nor any of their family members that she was planning to make the trek.

‘I didn’t support it. I asked her, why? Why would she want to put our little girl through that? But it was her decision at the end of the day.’

He said that Sandra had always wanted to experience ‘the American dream’ and hoped to find a good job in the States.

I saw so many people dismiss this story because it came from The Daily Mail. I have some news for you! Reuters confirmed this information with Honduran Deputy Foreign Minister Nelly Jerez. The Daily Beast received confirmation from the border patrol. ICE sent confirmation to Buzzfeed.

In other words, another narrative squashed.

Thing is, the media should have never used the photo for their narrative. John Moore, the photographer for Getty, told The Washington Post that he didn’t “know what the truth” was and he feared “they were split up.”

FEARED. The media twisted this to fit their agenda, but Moore didn’t know if officials split up the mother and daughter.

But since when did they care about facts? Moore also told Time his story and put in the article that “the girl was carried away screaming by border agents.” The magazine had to go back and change the FACT that the girl and her mother went together.

If you don’t want people to call you fake news then don’t be fake news. https://t.co/NQNWCTHsgl

“Why does the public distrust the media?”

Just decided.one day to come to America for a better economic life

Want a better life, fine. Apply like everyone else does. and get in line!

From what I have seen, Mexicans have a decent work ethic, but they are also usually low skills, meaning that their children end up drawing welfare. Since they have large families, they cost American taxpayers.

In light of the fact that there are at least ten million here illegally, and their high reproductive rate, I think there should be at least a ten year moratorium on accepting any more people from Latin America.

As a person born in the late 60s, I enjoyed growing up during the time that benefited from basically NO illegal immigration and almost NO legal immigration: from the 20s until the 60s.

It was a wonderful life, with Moms at home during the day and other kids to play with outside all the time.

I advocate no legal immigration for at least 40 years to assimilate those here — or actually, for forever. We’ve only had this problem since Teddy Kennedy’s B.S. bill in 1965. WHY WOULD WE EVER WANT TO GO THROUGH THIS DRAINING EXPERIENCE AGAIN??!!

That was also during the era of the very robust and effective Braceros Program for seasonal guest workers. Bush 43 tried to resurrect the guest worker program and got crucified for it.

These non stop faux OUTRAGES are approaching the level of ‘blood libel’.

I see the media is using Hamas’s practice of faking pictures.

The irony is that the dad was relieved to learn that the mother and kid were being detained in U.S. custody, because he knew (as did the mother, no doubt) that the mother and daughter were in much greater danger on the journey through Mexico, especially in the border regions, which are controlled by the cartels.

The Honduran father has more common sense than millions of hysterical American leftists.

Treasure of the Cesspool Media.

Dobbs: “If you’re journalists, where are your facts?”

Another Dan Rather style “fake but accurate” meme.

So they admit none of them are ‘refugees’? Good, this makes it clear they’re here for the money. It’s the cheap labor, illegal votes traitors that want the illegals here. Make it a serious crime to encourage, abet, or facilitate illegals in anyway. Make it harsh publicize every illegal flight back to their shithole country.

Every single one that does not stop in Mexico and ask for asylum had to go straight back. If they can show they stopped in our fine neighbour’s country and properly applied for asylum then they can be processed here.

A mother who drags her small daughter across an entire country, under arduous conditions, for economic advancement. Fake propaganda, by supposedly reputable news organs, to advance a Lib/Prog agenda. A benevolent US government which keeps the mother and daughter together, at least temporarily. This is obviously horrible treatment for a person who violated US laws to for economic gain.

This is what our country has been reduced to. 30 years ago a person would have thought that lying was a bad thing. This changed to lying being alright, unless you got caught. This attitude changed to lying was alright, even if you got caught at it, if you somehow benefited from that. Today, a large segment of our society firmly believes that being branded a liar for the rest of your life is perfectly acceptable, as you can simply lie again and claim that you do not lie. And, these liars expect other people to believe that. That so many people actually DO believe these proven liars is even more disturbing.

I love the subtitle, “Welcome to America.” It really reveals the end game.

“Aaawwww! You brought a child with you. Come on in!”

So, everyone is on the same page. Those who want to violate our borders and those who want to protect our borders. The key to extortion is children. The way to tell the difference is that Trump is taking the key away from the illegals, and the advocates of illegal immigration are screaming bloody murder about it.

Can someone explain what happened with families who were nabbed before the zero tolerance policy?

To be absolutely truthful, as I understand it, she WAS separated from her mother by about 5 or 6 feet while her mother was being searched.

I am surprised that Trump looks so benign in this confected presentation. I don’t think he looks cold-hearted here at all. The MSM has jillions of photos that make Trump look like a raving loon, angry despot, sneering sociopath, and every other possible deplorable attitude. I don’t believe they have discovered the use of subtlety in propaganda, so why did they choose a neutral photo?

It’s not that I approve of this media-created propaganda piece, it’s just that I am a bit surprised that for once they forgot to lather on a really thick layer of over-the-top smear frosting.

I agree. Time really blew it. Trump looks benign,a bit puzzled and somewhat fatherly. It will not have the effect Party apparatchiks want.

time served a huge win to the Deplorables with this cover. It’s getting effectively meme’d on the nets/social media. The picture of DJT they chose lends itself to any emotion, and the MAGA crowd is exploiting it bigly. Apparently time is unaware of the Trump curse, you’d think all of the msm would have caught on by now.

This story just gets better and better. Now it is reported that the mother of this child was previously deported in 2013 and traveled to the US, this time, without telling any of her family members in Honduras, including her three other children [ages unknown]. And, according to her husband, she did it solely for economic gain.

In other reports the father says that the mother paid a coyote $6,000 to smuggle her and the kid into the U.S.

Nearly half of American families couldn’t come up with $400 in cash for an emergency, but this “desperately poor” illegal alien can come up with $6,000 cash to pay a smuggler?

Why was this Honduran woman (whose husband says he has a good job) so eager to come to the U.S. that she’d risk exposing her little girl to drug cartels that rape, kidnap, and sex-traffic kids? Not to mention exposing the kid to harsh desert conditions in the summertime? There must have been a mighty powerful incentive for her to come here. Perhaps it was the thought of the thousands of dollars in cash and benefits she could get every month from the U.S. government if she made an asylum claim (which is what she has now done)?

Having destroyed America’s prospects of being able to afford health insurance, Dems/MSM AND the GOP are happy to change the subject to misery of non-Americans.

How long will it be before they are Photoshopping images of kids crying on Santa’s lap and slapping them in front of the President?? Are not the families that sent their children, UNACCOMPANIED, to the U.S. guilty of family separation? We should reunify them will all haste with quick deportations. After all, if they traveled all that way alone, they certainly aren’t babies or toddlers.

Where are the pictures of crying children and parents that are the victims of drugs, gangs, DUIs etc. committed by illegals? Don’t we have enough of that on our own that we don’t have to allow it in?

The only people using illegal children as props are the Democrats (or is it Democratics?) and the media. But I repeat myself.