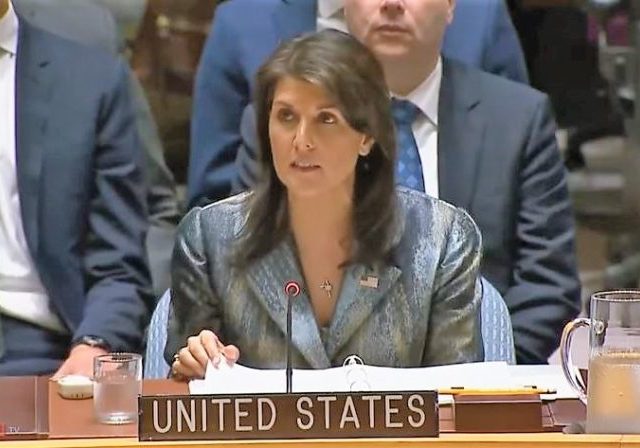 Once again, if you don’t want to be called fake news, DO NOT PUSH OUT FAKE NEWS.

The New York Times published an article this morning that curtains in Nikki Haley’s apartment cost $52,701. Buried within the article? The Obama administration ordered the curtains in 2016 and Haley had no say in it!

The State Department in 2016 decided to lease this apartment for the US ambassador to the United Nations, “with an option to buy, according to Patrick Kennedy, the top management official at the State Department during the Obama administration.”

SIX paragraphs into the article, the NYT writes that Haley’s spokesman said the ambassador “had no say in the purchase.” Yet, the article continues to call it Haley’s curtains:

A spokesman for Ms. Haley said plans to buy the curtains were made in 2016, during the Obama administration. Ms. Haley had no say in the purchase, he said.

The curtains themselves cost $29,900, while the motors and hardware needed to open and close them automatically cost $22,801, according to the contracts. Installation took place from March to August of last year, during Ms. Haley’s tenure as ambassador.

Ms. Haley’s curtains are more expensive than the $31,000 dining room set purchased for the office of Ben Carson, the secretary of the Department of Housing and Urban Development. That purchase became so controversial that President Trump considered firing Mr. Carson, though the spending rules covering agency chiefs are different from those for ambassadors.

While Ms. Haley’s curtains were being ordered and installed, Rex W. Tillerson, the administration’s first secretary of state, had frozen hiring, pushed out many of the department’s most senior diplomats and proposed cutting the department’s budget by 31 percent. In embassies around the world, projects were eliminated, jobs were left unfilled and the delegation to last year’s United Nations General Assembly meeting was slashed.

Then the publication has the nerve to put a quote in from an Obama official, trashing the purchase…even though it was said administration that purchased the curtains:

“How can you, on the one hand, tell diplomats that basic needs cannot be met and, on the other hand, spend more than $50,000 on a customized curtain system for the ambassador to the U.N.?” asked Brett Bruen, a White House official in the Obama administration.

But Mr. Kennedy defended the purchase, saying that it would probably be used for years and that it was needed for both security and entertaining purposes.

“All she’s got is a part-time maid, and the ability to open and close the curtains quickly is important,” Mr. Kennedy said.

When The Washington Post has to correct you….if you look up “buried lede” in the dictionary, this portion of the NYT article is there as a classic example.

This seems like a pretty important paragraph that we should get to the bottom of before calling them “Nikki Haley’s $52,000 curtains” https://t.co/2RfJkFqvch pic.twitter.com/AZOJwsofwS 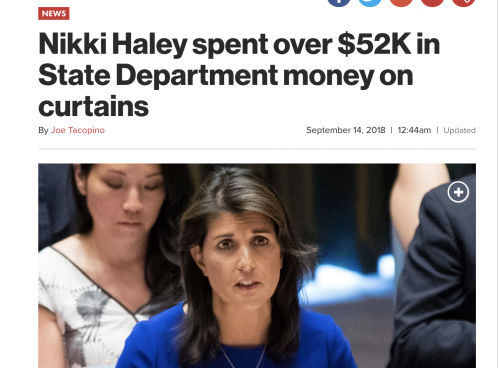 Others quickly tried to put out the fire…

Why people distrust the NY Times, Part 8,967,465. Breathlessly announces curtains in Nikki Haley’s official residence cost $52,701 at a time of “deep budget cuts.” Forgets to mention curtains had been ordered in 2016 by Obama admin. #FakeNews #Hackeryhttps://t.co/arXHzUAQpy

Six graphs in before they tell you Obama’s Administration ordered the damn curtains. A better headline would be, “Haley Fails To Cancel Obama Era Curtain Order.”https://t.co/OFj49FfmdA

Scummy and classless! It’s stuff like this where they truly earn their nickname “The New York Slimes!”

Like the DOJ and FBI, the democrats, the traditional media’s lies and bias are disclosed daily. One voice with a podium calls them out: Trump.

No mention of cutting security in embassies in say…. Libya while purchasing formal dinnerware for embassies in Europe…. oh… that was Clinton

Or, they assumed Hilliary was going to win, and their wasteful spending would never be disclosed.

Wait, it’s a New York Times reporter? They probably went to Lowes and drew their comparisons by looking at bedroom drapes for their one-story walk-up.

Fact of Life for GSA: Everything costs more and takes longer.

All the news that’s fit to line the bottom of a birdcage with.

That is a cruel thing to do to your bird. PITA will get you.

Good point. What was I thinking? Fish wrap, maybe?

Do you really want your fish poisoned?
Maybe the remains after cleaning the fish……..

Any Dem campaign literature will do. But an HRC book on sale and line the cage bottom with it. The doo-doo will blend in and not be noticed.

The real question is:
Does the msm / lsm, print, say or report – ANYTHING that is true anymore ???
Anything that is not a lie, distorted, or deceitful ???

It would be hard for any thinking person with an IQ north of room temperature to say anything but a straight “No”. That said, I’m sure there are many addled lefties (but I repeat myself) who still think the NYT and its lame-stream media counterparts are the gospel.

I’m sure there’s something of worth in the classifieds!?!

What is so incredible about this whole thing is that the Times posts this story under a totally misleading headline and then puts it all into perspective several paragraphs into the story by saying that the curtains were ordered and paid for during the Obama administration, not the Trump administration. This destroys the credibility of the story. But, the Times knows its audience. The editors know that most of their readers will never get past the first two or three paragraphs of the story. And, many will never get past the headline.

The absolute best result in this kerfuffle was Anti-2A puke David Hogg absolutely embarrassed himself with this tweet:

There are starving children in America everyday and you have the audacity to misappropriate thousands of tax dollars for your own lavish lifestyle. Resign immediately

Still laughing at him.

What’s even more incredible is that the Times backed off so quickly. Someone had a little chat with the editors?

All —
Pay close attention to this. It’s not just the NYT. It’s all of the other liberal-leaning rags that pick and choose the stories from the NYT that they want to carry.

This is from the Charleston (S.C.) City Paper. They’ll headline the story to smear Haley, to leave an impression in their readers’ minds that Haley is just a profligate spender. But the correction??

We don’ need no stinkin’ correction.

This is where the danger lies. Until there are consequences for paper X printing—and distrbuting—fake news, this will continue.

Ethics and any hint of objectivity in the news business is extinct. Freedom of the press be damned. If you print a falsehood, it should cost you.