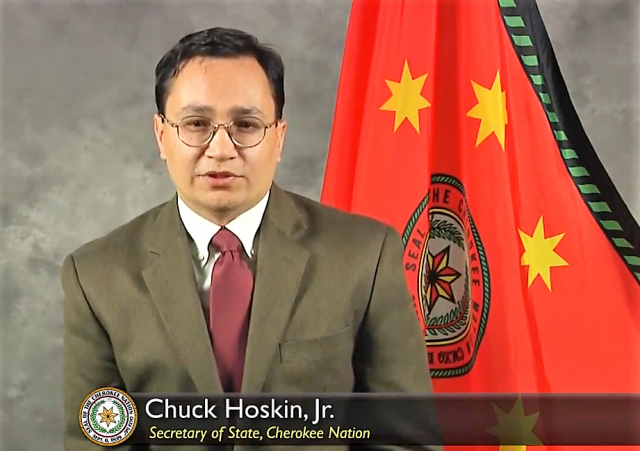 When Elizabeth Warren rolled-out her DNA test in October 2018, there was a lot of laughter and mockery because the test revealed that she may be as little as 1/1024th Native American by DNA. Even that finding was suspect given the DNA sample used for comparison was not from North American Indians, so Warren may be 0% Native American.

But it was no joke to actual Native Americans, particularly Cherokee, whose identity Warren had misappropriated for employment purposes as she was climbing the law professor ladder to Harvard Law School.

In fact, there was widespread disgust over the use of DNA to try to prove Native American identity.

The Secretary of State for the Cherokee Nation, Chuck Hoskins, Jr., issued a statement that was widely quoted in the media:

“A DNA test is useless to determine tribal citizenship. Current DNA tests do not even distinguish whether a person’s ancestors were indigenous to North or South America,” Cherokee Nation Secretary of State Chuck Hoskin, Jr. said. “Sovereign tribal national set their own legal requirements for citizenship, and while DNA tests can be used to determine lineage, such as paternity to an individual, it is not evidence for tribal affiliation. Using a DNA test to lay claim to any connection to the Cherokee Nation or any tribal nation, even vaguely, is inappropriate and wrong. It makes a mockery out of DNA tests and its legitimate uses while also dishonoring legitimate tribal governments and their citizens, whose ancestors are well documented and whose heritage is proven. Senator Warren is undermining tribal interests with her continued claims of tribal heritage.”

There was some pushback that Hoskins didn’t speak for the tribe, and may have gone rogue. But he continued his criticism of Warren:

Warren steadfastly stuck to her story and defended the DNA test, until it because obvious she was damaging her nascent presidential ambitions. So Warren quietly sort-of, not-really, apologized privately to Cherokee leaders, but Warren’s claim to be Native American and the DNA test continue to haunt her campaign.

Hoskin stuck by his criticism even after Warren’s belated apologies, writing on January 31, 2019:

This concept of family is key to understanding why citizenship matters. Everyone who cares about us as natives are welcome, but at critical moments those who have legal and cultural standing have a unique place with specific rights and responsibilities.

That is why it offends us when some of our national leaders seek to ascribe inappropriately membership or citizenship to themselves. They would be welcome to our table as friends, but claiming to be family to gain a spot at the table is unwelcome.

In a recent radio appearance, Warren admitted she should not have claimed to be Native American, but she blamed her parents for telling her family lore. (This excuse doesn’t hold up, because Warren didn’t claim to be Native American as a child, teen, or even in college. She only claimed that status quietly for employment purposes starting in her mid-30s.)

Hoskin, who turned the media tables against Warren’s DNA test, was just elected Principal Chief of the Cherokee Nation, as this official announcement states:

“Being elected your Chief is one of the greatest honors of my life. It is a responsibility that I promise to never take lightly,” Hoskin said. “We have a tremendous foundation, but there is more work to do to improve the livelihood of our people. I pledge to be a voice for all Cherokees and work hard on their behalf to make our great Nation stronger.”

When you compare the dignity of the Cherokee Nation handling of the issue with Warren’s pathetic attempts for many years to justify what she did, it’s obvious why this is still an issue for her.

The dems can lie, plagiarize, stifle all opposing speech, cheat, steal, attempt a coup, conduct massive voter fraud, grease the skids for illegals, among other things: All is forgiven, if not embraced, for it is done for the right cause. To them their ends certainly justify their means.

notamemberofanyorganizedpolicital in reply to Rick. | June 5, 2019 at 4:06 pm

Tribal heritage not about race so much as it about particular values, shared interests and a philosophical mindset embodied in the culture of a tribe. Oral tradition is highly valued by most Native American cultures, above written history. As we like to say, history is written by the winners and can’t be trusted. Oral histories are told over and over again by elders who pass them down through daily rituals and otherwise.

But Fauxcahontas’ skimpy claim is based on a different “oral” tradition, her presenting of dubious family hearsay. Is her claim to an ancestor having married a Cherokee the only “knowledge” passed down? That doesn’t make her a Cherokee even if true.

So how is hiring her on the basis that “her people” have been wronged make sense? It does nothing to advance the interests of any tribe nor right any wrong committed again her due to her “heritage”. She could just as well have claimed she was black or an extraterrestrial.

There is no putting a positive spin on this. She is a shallow grifter.

This quote from Hoskin is so eloquent and to the point:

“They would be welcome to our table as friends, but claiming to be family to gain a spot at the table is unwelcome.”

And the cold hard reality is that Warren was even more callous than appears on the surface. Not only did she claim a family slot at the table but she professed that part of her reason for making the claim was “to meet people like me” what is a bold faced lie. She took the family slot at the table and parlayed it into high profile roles at Penn and Harvard but never once engaged any Native American groups at either institution or anywhere else for that matter.

She stole the slot at the table then did nothing to advance the cause of Native Americans at Harvard or pen. She didn’t reach out to them, she didn’t engage their student groups… nothing.

She claimed to be family yet wasn’t even a friend.

I don’t think it’s possible to pile on too much with this. Warren is a lying dirtbag at the root level. That needs to be hammered home as often as possible.

I am sure Fauxcahontas is baffled by the concern about her lying. After all, it was Hillary who gave a speech to her real constituents, talking about the need for a public position and a private position. If Hillary could do it, why not her?

I find it very offensive that American Indians are referred to as ‘Native Americans.’

I’m sure they’d balk at something accurate like “aboriginals” or even “autochthons”.

I don’t find it as offensive as you do but it is illogical. My family came to this continent more than 350 years ago. Apparently, though, that’s not long enough to be a “native.”

Even the “native” Americans (they weren’t ever Americans, just tribes until the war of independence) weren’t native to North America. There is ample evidence they came from somewhere else. And they weren’t peaceful to the previous inhabitants.
We really need to tell the tribes they are no longer a separate nation. Sit down, figure out a fair deal and dump them into society.

I don’t know if they realize it or not but the Native Americans should understand that people may be concerned about how the “Nations” go about determining their citizens. And do these citizens have to be American citizens or become American citizens if they become a Nations citizen.

I think that’s problematic and could cause some people to demand there be some oversight by the US as the Nations are within and a part of the US although they do have sovereignty I don’t think they have total sovereignty and cannot setup a regime on their reservations that would be inimical to the US.

Maybe I’m wrong and it’s no big deal or it’s already handled somehow but this bothers me that these Nations can decide who is a citizen or not according to THEIR rules and apparently without concern about US rules.

As a side note, there is not database on the Native American Nations as they refuse to allow one. Also they claim rights to any ancient human remains found on US soil whether on a reservation or not.

I think that’s short sighted and makes me wonder what they think they need to hide. It also prevents legitimate research into the indigenous natives and how they came to this continent and that may be why the Native American tribes don’t cooperate and have taken over and stopped any of this sort of DNA research from either end.

If it was white people doing this you know there’d be a huge outcry and laws against it.

I believe current “Native Americans” oppose archaeological research into their past for fear that it will eventually show that they are not the “First People,” but instead are responsible for annihilating the actual first people of the Americas. That would knock them from their high horse and turn the “victims” into “colonialists” guilty of genocide.

Does someone want to tell this mutt that Warren has disavowed her claims of tribal ancestry?

So you’re ok with a con job which lasted for years? Most are not.

but at critical moments those who have legal and cultural standing have a unique place with specific rights and responsibilities.

Very good; a politically elegant way of saying “see who qualifies for free handouts from Washington.”

I don’t think “dignity” is the word I’d use. They’re all fighting for largesse of one sort or another; freebies they haven’t actually earned.

Maybe Liz will tire of politics and take a job as, oh I don’t know, as maybe President of Cornell Law School.

Could put facility meetings on pay for view.

Best slogan from the Asian Indian who ran against Sen. Checks-the-Box in the 2016 Massachusetts Democratic Party primary: ” It takes a real Indian to beat a fake Indian. “