Democrats have a vested interest in keeping the racial pot stirred going into 2020, but it’s unfortunate to see a civil rights pioneer like Lewis join in on it. 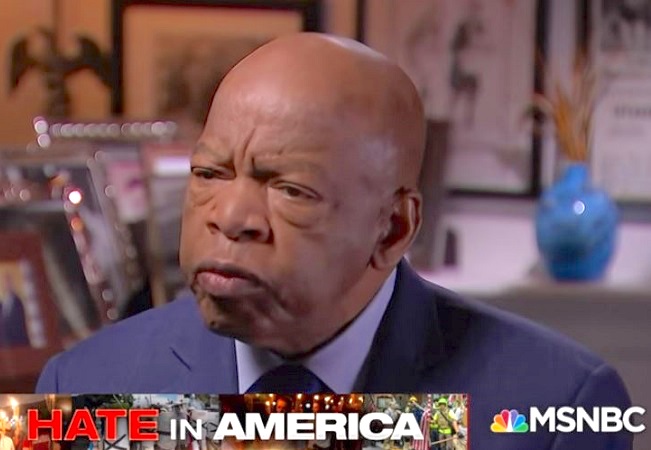 Rep. John Lewis (D-GA) appeared on a segment of MSNBC’s “Hate in America” special on Memorial Day to answer questions from Hardball host Chris Matthews on white supremacy and anti-Semitism in America.

During the interview, Lewis told Matthews he believes that the election of President Donald Trump stopped America from heading in the positive direction during past Democratic administrations.

Matthews asked specifically how Trump was elected in 2016, “knowing his attitudes about race, about division.”

“I’m not so sure, but somehow and some way, his message arrested that movement toward goodness and openness. People stopped respecting the worth and dignity of all of us,” Lewis said.

In the same interview, Lewis said that Trump appears to “feel at home” with what’s happening in the country, pointing to Trump’s remarks concerning the Charlottesville riots in 2017.

“I don’t think this president has been helpful. I think he feels at home with what is going on. When he reacted to what was happening in Charlottesville, you know, ‘Good people on both sides,’ I cried,” the lawmaker said.

There is a lot of wrong to unpack here. Let’s start with what Lewis claimed Trump said about Charlottesville. People have debunked this myth over and over again. Here is the transcript from Trump’s press conference:

After another question at that press conference, Trump became even more explicit:

“I’m not talking about the neo-Nazis and white nationalists because they should be condemned totally.”

For the benefit of the press, I will include in this thread the many links debunking Biden's announcement gaffe-of-the-century about the "fine people" hoax. Starting with the transcript. Make sure you read the bottom part. #Biden2020 #FinePeopleHoax pic.twitter.com/3z8OJt3e8U

I agree with Lewis that we do not want to see in America the violence, the injuries, and the death of an innocent young woman. But like many other Democrats, he perpetuated the media-driven falsehood about what Trump said in response to what happened in Charlottesville, which only makes matters worse.

While the mainstream media and the left have a vested interest in keeping this myth going as we head into the 2020 election cycle, it’s unfortunate to see a civil rights pioneer like Lewis join in on it.

Secondly, did the Obama administration see a positive direction on race? No, we weren’t, as Joel Pollak documents here:

In fact, a widely-cited Gallup poll shows race relations began to decline during President Barack Obama’s second term, in the aftermath of the Trayvon Martin controversy and through the Black Lives Matter movement that followed.

In 2010, Lewis was at the center of another alleged racial hoax, when several Democratic members of the Congressional Black Caucus claimed that Tea Party protesters had shouted the “n-word” at him as he walked through their demonstration on the weekend that Congress was voting on Obamacare. The claim, widely repeated throughout the media and used to malign the Tea Party as racist, was never substantiated.

As Pollak also noted, Lewis took the low road in 2008 with comments he made about Republican presidential nominee Sen. John McCain and his vice presidential running mate Sarah Palin. The civil rights icon insinuated they were racists who reminded him of the days of segregationist Gov. George Wallace.

Let’s also not forget the countless times people dismissed legitimate criticisms of President Obama’s agenda as nothing more than “racist attacks” against the president.

On the issue of anti-Semitism in America, what can we attribute to the rise in attacks against Jewish people? People have debated this subject for the last two years, with Democrats predictably blaming Trump.

But is it the non-stop false painting of Trump, who often stands shoulder to shoulder with Israeli PM Benjamin Netanyahu, as a raging enemy of the Jewish community?

Or could the slow, but steady rise – and acceptance of – anti-Semitism within the ranks of the Democratic party be one of the factors? After all, two Democratic women who unapologetically support the anti-Semitic BDS movement and who have routinely repeated anti-Semitic tropes were elected to the U.S. House last year in a blaze of glory.

Do not forget the Congressional Black Caucus and their longtime embrace of the anti-Semitic Nation of Islam Minister Louis Farrakhan, which neither the mainstream media nor Pelosi, Hoyer, nor other Democratic leaders have objected or condemned. Lewis, by the way, ranks as the senior-most member of the CBC.

On the other hand, Republican leaders stripped Rep. Steve King (R-IA) all his committee assignments in January after he made disturbing remarks suggesting there was nothing offensive about white nationalism and white supremacy.

The issues of anti-Semitism and white supremacy in America are severe ones that deserve honest, frank debates that center around finding out the who, what, when, where, why, and how (as in how do we combat them?). Unfortunately, we’re not going to get those types of constructive discussions from any of the programmings on left-leaning cable news outlets – nor their guests.

You can watch Lewis’s full interview below:

He and the other race baiters have become more than tiresome.

The country was “heading in a positive direction” under Obama with respect to race relations? Just fuck you, liar.

Like John McCain, whatever good this guy did long ago has long since been overcome by the harm he has done.

Don’t give them any undeserved clicks for this drivel, please. I understand source citation but your screen capture image effectively does that.

He is an embarrassment to Georgia.

Also part of why Georgia has the best politicians money can buy.

I don’t understand how blacks have been succored into defending the party of slavery, secession and segregation.

He a disgrace, period.

There is a reason why some words will never expire.

Can anyone remember the last time we had a race riot in any city in this country? I can. It was when Obama was in office. Race riots were almost commonplace.

It was almost as if the administration was purposefully ginning them up.

Obama’s ACORN buddies on the Federal payroll at DOJ comes to mind.

When your “leadership” qualities consist of getting the snot beat out of you by a group of Democrats, don’t expect much. Lewis delivers completely. The race baiting business has proved lucrative.

Another doddering leftist fool who needs to retire

I put him on an intellectual plane about equal to auntie maxine.

It’s not just his intellect, it’s his morals (or lack thereof.)

Wow! For minute there I thought you were talking about the cartoon character; there’s no question she’s far brighter.

Since they have room temperature IQs, I’d say it is proof against global warming, because they sure aren’t getting smarter.

Lewis is a one-trick pony. His participation in the c. 1960’s race marches and other activities is what got him to where he is today. If racial differences and resultant hostilities decrease, his relevance in the 21st century also decrease.

Like old ball players, he should make himself aware of when it is time to hang up the jock and let the youngsters take it on down the road.

Democrats whining about the deteriorating “racism” situation in modern America are too much like Nazis complaining about civil disorder after Kristallnacht. After Obama, who made not the slightest effort to be subtle about it, such obtuseness can only be deliberate.

Five years ago I was saying that they were overplaying their racist card, and that its value was decreasing as a result of misuse.

“I agree with Lewis that we do not want to see in America the violence, the injuries, and the death of an innocent young woman.”

The evidence shows that Lewis is an inciter of racial hatred who would not care about violence if the victims were white.

Lewis was broke till his wife started a nonprofit. Now he’s rich.

Lewis is just another corrupt democrat looking to continue looting the nation under the guise of curing an imaginary evil.

Blexit is a huge problem for the Democrat Party. And, the cry of “racism” has been used to rally African-Americans to the Democrat banner.

I wonder how the IRS investigation into John and his wife’s 501(c)(3) is progressing?

He is hoping for a Democrat presdeent in 2020, and it will all go away.

“Rep. John Lewis Perpetuates Myths Around Racism, Anti-Semitism During Trump’s Presidency”
Well, of course he did.

Lewis lost all of his credibility when he said that heard someone in the TEA party crowd yell “N*gger” as he and Pelosi walked from the House. All kinds of rewards were offered, one by Andrew Brietbart for $100,000, to ANYONE who could produce an audio of this infamous quote but none were ever offered. From then on, he has been a party-line hack with nothing to be proud of.

A party hack whose better days were 50+ years ago. Today many black students at some of our most prestigious universities demand black-only dorms and graduations. Why isn’t civil rights hero John Lewis trying to end this growing self-segregation among black college students?