“As alleged, AVENATTI used misrepresentations and a fraudulent document purporting to bear his client’s name and signature to convince his client’s literary agent to divert money owed to AVENATTI’s client to an account controlled by AVENATTI.  AVENATTI then spent the money principally for his own personal and business purposes.”

We’re losing track of all the indictments against Michael Avenatti.

And that’s not even getting into the problems he caused Stormy Daniels by bringing a defamation suit against Trump, and other business problems:

Remember, this guy was the toast of #TheResistance media, FLASHBACK: When the media was in love with Avenatti, a supercut:

The feds just indicted Avenatti for stealing from a client, widely believed to be Stormy, as well as for his previously charged alleged extortion of Nike:

Geoffrey S. Berman, the United States Attorney for the Southern District of New York, and William F. Sweeney Jr., Assistant Director-in-Charge of the New York Office of the Federal Bureau of Investigation (“FBI”), announced the indictment today of MICHAEL AVENATTI on fraud and aggravated identity theft charges.  As alleged, AVENATTI used misrepresentations and a fraudulent document purporting to bear his client’s name and signature to convince his client’s literary agent to divert money owed to AVENATTI’s client to an account controlled by AVENATTI.  AVENATTI then spent the money principally for his own personal and business purposes.  The fraud and aggravated identity theft case is assigned to U.S. District Judge Deborah Batts of the Southern District of New York.

AVENATTI was separately indicted today on extortion charges, which were the subject of a previous Complaint and arrest of AVENATTI, relating to his alleged attempt to extract more than $20 million in payments from Nike, Inc., by threatening to use his ability to garner publicity to inflict substantial financial and reputational harm on the company if his demands were not met.  That case is assigned to U.S. District Judge Paul Gardephe of the Southern District of New York.

Manhattan U.S. Attorney Geoffrey S. Berman said:  “Michael Avenatti abused and violated the core duty of an attorney – the duty to his client.  As alleged, he used his position of trust to steal an advance on the client’s book deal.  As alleged, he blatantly lied to and stole from his client to maintain his extravagant lifestyle, including to pay for, among other things, a monthly car payment on a Ferrari.  Far from zealously representing his client, Avenatti, as alleged, instead engaged in outright deception and theft, victimizing rather than advocating for his client.”

Here are the key allegations of the indictment, from the DOJ press release:

From August 2018 through February 2019, AVENATTI defrauded a client (“Victim-1”) by diverting money owed to Victim-1 to AVENATTI’s control and use.  After assisting Victim-1 in securing a book contract, AVENATTI allegedly stole a significant portion of Victim-1’s advance on that contract.  He did so by, among other things, sending a fraudulent and unauthorized letter purporting to contain Victim-1’s signature to Victim-1’s literary agent, which instructed the agent to send payments not to Victim-1 but to a bank account controlled by AVENATTI.  As alleged, Victim-1 had not signed or authorized the letter, and did not even know of its existence.

Specifically, prior to Victim-1’s literary agent wiring the second of four installment payments due to Victim-1 as part of the book advance, AVENATTI sent a letter to Victim-1’s literary agent purportedly signed by Victim-1 that instructed the literary agent to send all future payments to a client trust account in Victim-1’s name and controlled by AVENATTI.  The literary agent then wired $148,750 to the account, which AVENATTI promptly began spending for his own purposes, including on airfare, hotels, car services, restaurants and meal delivery, online retailers, payroll for his law firm and another business he owned, and insurance.  When Victim-1 began inquiring of AVENATTI as to why Victim-1 had not received the second installment, AVENATTI lied to Victim-1, telling Victim-1 that he was still attempting to obtain the payment from Victim-1’s publisher.  Approximately one month after diverting the payment, AVENATTI used funds recently received from another source to pay $148,750 to Victim-1, so that Victim-1 would not realize that AVENATTI had previously taken and used Victim-1’s money.

Approximately one week later, pursuant to AVENATTI’s earlier fraudulent instructions, the literary agent sent another payment of $148,750 of Victim-1’s book advance to the client account controlled by AVENATTI.  AVENATTI promptly began spending the money for his own purposes, including to make payments to individuals with whom AVENATTI had a personal relationship, to make a monthly lease payment on a luxury automobile, and to pay for airfare, dry cleaning, hotels, restaurants and meals, payroll, and insurance costs.  Moreover, to conceal his scheme, and despite repeated requests to AVENATTI, as Victim-1’s lawyer, for assistance in obtaining the book payment that Victim-1 believed was missing, AVENATTI led Victim-1 to believe that Victim-1’s publisher was refusing to make the payment to the literary agent, when, as AVENATTI knew, the publisher had made the payment to the literary agent, who had then sent the money to AVENATTI pursuant to AVENATTI’s fraudulent instructions.

The same press release linked to an indictment regarding the prior extortion charge involving Nike. 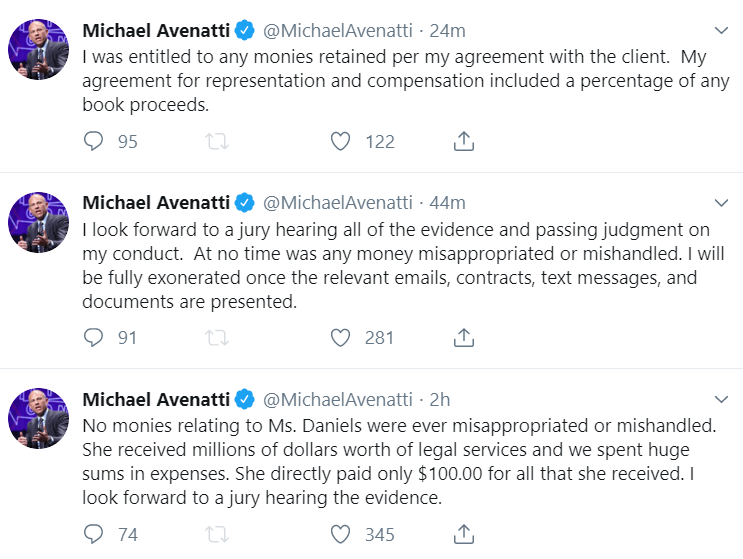 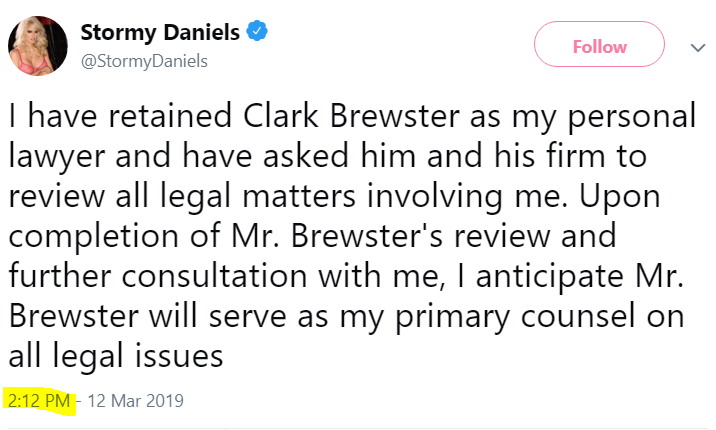 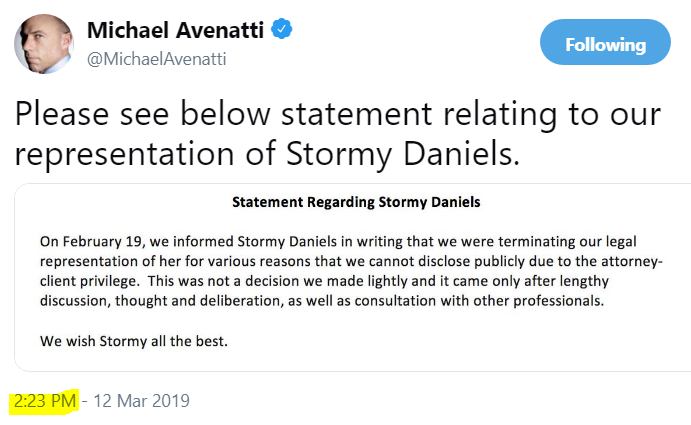 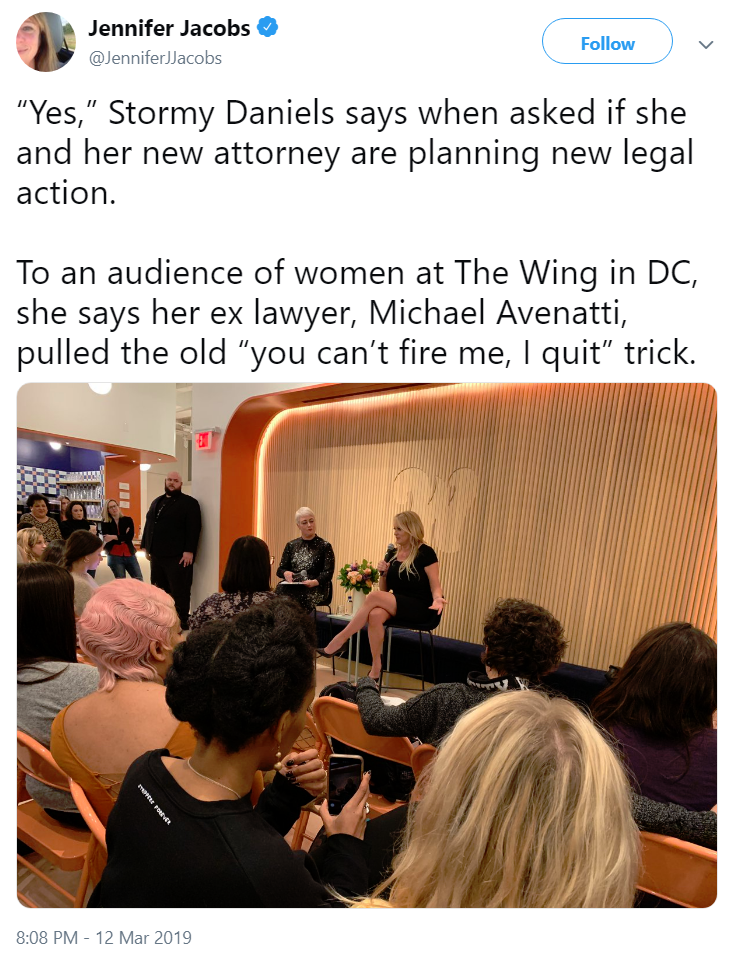 What’s the next shoe to drop on Avenatti? Remember I called it: 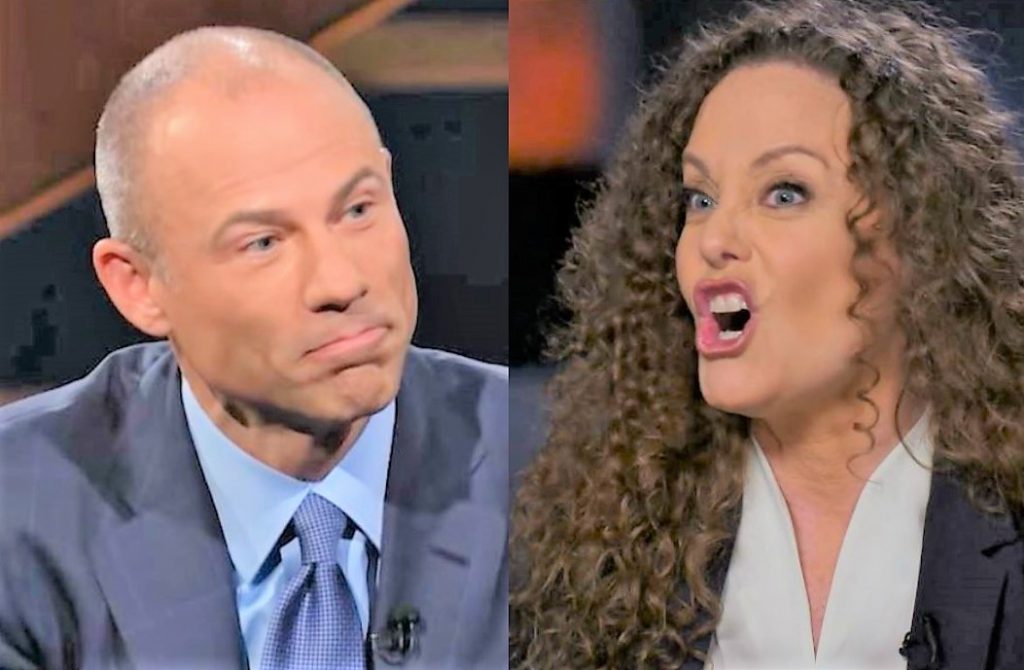 The Resistance still has Shifty Shift and Nasty Nadler

Double entendre is a serious allegation.

It is wonderfully astonishing at the number of people who have hurled all sorts of accusations about and at President Trump only to come off looking worse than anything they accused him of.

Methinks the Resistance is beginning to take casualties. They want a war with no casualties on their side.

What’s really funny is that he’ll be able to get a book writing deal and probably a film deal out of all this because he managed to really be so blatant and extensive of the “bad lawyer” trope.

He’ll be the name of this type of lawyer for decades.

No more ambulance chasers and such terms. It’ll be “he’s an avenatti wanna be” or something.

Avenatti, won’t get such ‘appealing” playmates in jail!……:O}}}

Am I the only one who doesn’t find either of these women at all appealing?

at least he is consistent in his behavior…

so, when does he get disbarred?

As far as we know he only screwed her financially.

According to CNN’s Brian Stelter, Avenetti is a “credible presidential candidate.”

It was Joy Behar, Who Gushed Avenatti Would ‘Save the Country,’

What dirt bags. And they want to govern us??

Joy Behar, makes even the dumbest blonde……look like a PHD!

What a total fool, & she gets paid to be the dumbest fool on T.V.

That’ll teach Avenotti to trifle with his affections!

Stephanie Clifford got used by an man. Again. I’m shocked.

Avenatti must have missed the class in Law school where they explained that the term “criminal lawyer” means a lawyer that takes criminal cases, not a lawyer who is a criminal.

He didn’t miss anything. He’s a sociopathic criminal.

Rags was definitely second, or more like third rate. Irrational hate, knee jerk emotional responses, juvenile insults. It is hard to imagine Rags keeping his cool in court, and easy to see how a really good attorney could eat his lunch.

So when is Avenetti announcing his candidacy for leader of the Democrat Party? He’s eminently qualified.

Michael Avenatti actually said this in a posted video compilation (on the View, I believe):

You cannot make this up. Boy, is he gonna get his wish …

I thought she made a living out of getting screwed. What did she expect from a scumbag like Avenatti?

Over my career I dealt with plenty of honest attorneys, I did run into a few dishonest ones. When they were sufficiently irritating, I would adjust their attitudes in a multitude of creative ways. I destroyed the practice of one, got two others fired from their jobs, and two disbarred.

There are some attorneys who deserve to be destroyed, Avenatti is definitely one of those. It warms my heart seeing him brought down.

Avenutty is a real lawer!

Well, this shouldn’t be a problem for Avenatti. After all, he’s told us he’s the “bestest”, “greatest” and most qualified and experienced lawyer in the history of lawyers in the whole of the United States and that “Nobody should f**k with him”. So getting out of these charges should be a cake walk for him.

Couldn’t happen to a better guy.