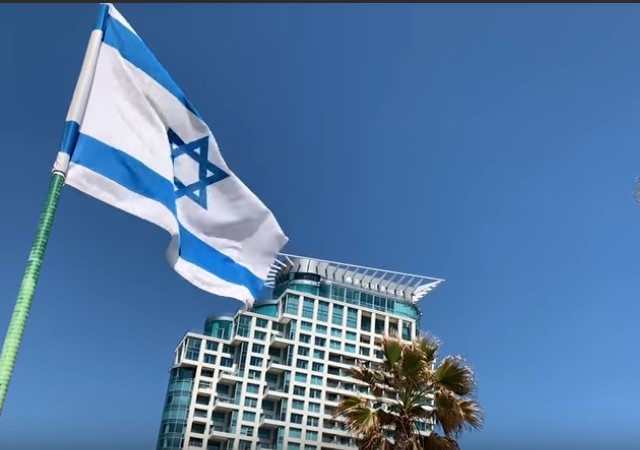 In an exclusive report this week, Israel’s Ministry of Strategic Affairs, which is tasked with fighting the Boycott, Divestment, and Sanctions (BDS) campaign to isolate Israel internationally, revealed that the BDS movement has deployed hundreds of bots to promote a campaign to boycott this year’s Eurovision Song Contest, which is slated to be held in Tel Aviv later this month.
According to the Ministry’s report, the BDS campaign has attempted to promote its agenda by using “coordinated manipulation” employing bots to tweet messages with the hashtag #BoycottEurovision2019.  Such campaigns are prohibited according to Twitter’s terms of service.

Twitter confirmed that it had suspended a “small network” of accounts based on the Israeli complaint.

The campaign, according to the Ministry was coordinated by “PACBI (The Palestinian Campaign for Academic and Cultural Boycott of Israel), the academic arm of the BDS National Committee (BNC) operating from Ramallah with close ties with the PNIF (Palestinian National Islamic Forces), an organization which is comprised of many Palestinian organizations including five terror groups, among them; Hamas, the PFLP and the Palestinian Islamic Jihad.”

(The ties between BDS and terror groups have been established elsewhere. Armin Rosen and Liel Leibovitz reported in Tablet Magazine last year that the US Campaign for Palestinian Rights, an umbrella group for BDS in the United States, which is registered as a non-profit in Virginia, facilitated donations to PNIF. In 2016 Congressional testimony, Foundation for Defense of Democracies Vice President for Research Jonathan Schanzer, a former Treasury Department anti-terror official, noted that seven former employees of the Holy Land Foundation, which was found to have funded Hamas, went to American Muslims for Palestine, a major BDS-supporting group.)

Nor is this the first that the BDS movement has resorted to such tactics,

“Past cases include a fake-user Twitter campaign launched late last year against the singer Lana Del Rey, in which Twitter bots were found to have partaken in pressuring the artist to cancel her planned visit,” the report stated. “Such actions are in line with practices employed by the cultural boycott campaign against artists and cultural figures intending to perform in Israel – which range from exerting indirect pressure to behind-the-scenes physical threats to the individual or his/her family, intimidation and shaming.”

In the case of Lana Del Rey, the intimidation was successful and the singer canceled her performance in Israel.

The deceptive tactics of the BDS movement, show that their campaign needs to be scrutinized. Their stated goal isn’t to change Israel’s behavior, but to destroy Israel.

As Prof. Jacobson has shown, singling out Jews or Israel for boycotts has a long dishonorable history. BDS is simply the repackaging of an old idea going back to anti-Semitic Durban conference of 2001 (not 2005 as many like to say.)

2001 is significant too. The Oslo peace process began in 1993. From then until the end of 1995, Israel withdrew from the main Palestinian population centers in the West Bank. At that point, roughly 90% of Palestinians were living under Palestinian Authority rule.

It’s pretty clear that the so-called Al Aqsa intifada was launched by Arafat as a way of deflecting blame for the failed summit. Durban and the boycott strategy adopted there, a year later, appears to be larger international effort to shift blame for the failed peace efforts on Israel and away from the Palestinians.

LI author Vijeta Uniyal has written up some of the important work that the Ministry of Strategic Affairs has done to fight BDS.

He reported on the Ministry’s revelation last year, that there are extensive ties between the BDS movement and terror organizations. The Ministry followed up with an extensive study detailing these links earlier this year.

But it’s not without benefits. Earlier this year, Vijeta was one of the bloggers fighting BDS who was invited to Israel by the Ministry to discuss strategies to fight the campaign to isolate Israel.

I’m not a fan of BDFs but what I’ve seen of Eurovision past, a successful boycott would do us all a favor.

Somebody needs to create a way for people to boycott everything, everybody they don’t like. I mean, Eurovision crowned some drag queen for God’s sake!!! (Sarcasm)

Other than ABBA’s international launch with a Eurovision win 45 years ago, on the very rare occasions when I think of it Eurovision causes me to wonder why anyone watches.

The only way to overcome the Ministry of Information and its bots is through education. I repeat, the importance of a real education cannot be overemphasized

The democrat media is a scam. So are their polls, their candidates and their loyalty to our country.

Obama could never be elected nowadays – enough sane people have caught on.

Awwww, the Palis are all relevantly cheating, because they have learned how to buy bots. Cute.

Fauxtography, faux atrocities, use of tactical necessity to draw strikes that kill neutral-to-friendly targets. Violations of the Geneva Conventions, and getting caught at all of it, so much so that even the old Saudi King found out.

The Palis will find the utter bottom, and start digging.

And somehow, rich nations keep paying for this criminal activity. Something, something, humanitarian something. Why?

Why don’t we all (Saudis and Qataris included) just stop funding terrorists? If they have to work for a living, maybe they will find something productive (other than murder) to do.

Seriously. Why should Yasser Arafat’s widow have been rumored to be one of the richest woman in the world?

Millions of Facebots Twittering their anti-semitism and other purposes.