McConnell says anti-Semitism “seems to be more fashionable in this country regretfully, at least among some members of the new class in the House.” 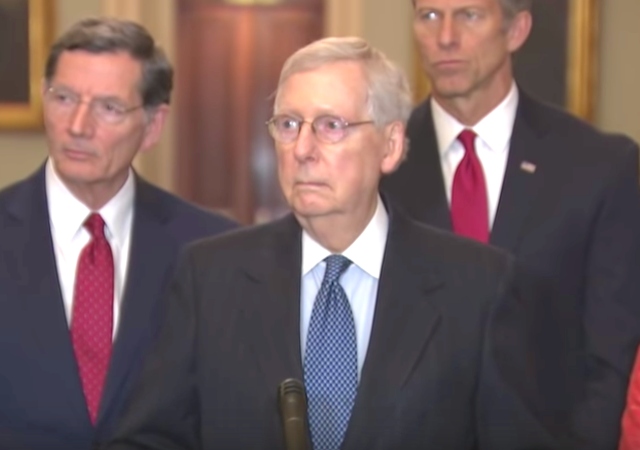 The Washington Examiner reported that Senate Majority Leader Mitch McConnell found the rise in anti-Semitism “disturbing” and has concerns about it.

At a town hall last weekend, Omar said, “I want to talk about the political influence in this country that says it is okay to push for allegiance to a foreign country.”

Jonathan Chait at The New Yorker explained that “[A]ccusing Jews of ‘allegiance to a foreign country’ is a historically classic way of delegitimizing their participation in the political system.” Chait wrote that the congresswoman “is directly invoking the hoary myth of dual loyalty, in which the Americanness of Jews is inherently suspect, and their political participation must be contingent upon proving their patriotism.”

House Democrats have started to draft a resolution to condemn anti-Semitism, but does not name Omar. Reports have also emerged that the Democrats may expand the language to include anti-Muslim bias.

The Senate passed a bipartisan anti-BDS bill in early February. McConnell mentioned the bill in his remarks, but thinks the Senate may have to expand on it:

“We feel like we already addressed a portion of this through the BDS proposal, and we may well address it again,” McConnell said.

McConnell from Senate floor on House anti-semitism resolution: “Unfortunately again for 2nd time in just the last 3wks,this seems to be in response to the invocation of crude, hateful & backward anti-semitic stereotypes by one specific freshman mbr of House Democratic majority.”

Nanny Pelosi has a high-wire to dance on.

Cocaine Mitch has a stronger position.

I’m of Irish Catholic heritage. My ancestors suffered their share of bigotry and discrimination. But I would never pretend to think that they suffered anything close to the vile persecution the Jewish people have suffered for centuries.

I stand with my Jewish friends and with Israel. Never let Omar and her contemptible ilk equate “Islamophobia” with Antisemitism. There’s no comparison. I hope the Senate calls Omar and the other two out accordingly.

I can hardly wait for the draconian condemnation from the RINOs in the Senate! With the turtle leading the sloths, what can we expect? Their attitude is if they overdo it then some future Demorat Senate will use the same technique. This is the logic of not backing Trump’s national emergency declaration. ICE is now claiming that over 1,000,000 illegals will cross this year! No crisis huh Nan?

So, will Republicans name names?
If so, popcorn please.

Perhaps I am naïve but I do not equate anti-Semitism (or anti-Zionism) with anti-Islam.

I see how hateful Islam can be, with its blood-lust, jihad, culture of death and terrorism. I do not know of any Jewish mother who prays that her children will become terrorists and will be killed while killing innocent defenseless Muslims. Islam and Judaism are not comparable.

I condemn anti-Catholicists, anti-scientists, anti-gravitationists, anti-Baptists, anti-semites, anti-palestians, anti-rationalists, anti-whitemaleanglosaxonprotestants, anti-anti’s. The problem is that I can never find any of these people to hate. Yes they do exist, but they aren’t even a minor part of our society. Could we please move on to some of the important issues we face?

By this rationale, a mere handful of wacky Muslims flying jets into large buildings are inconsequential.

The Democrat Party has a large segment of anti-Jewish members. Make them Own it!

I worked at the 2012 Democrat Convention in Charlotte and saw 40% of the delegates boo Israel and boo GOD!

People need to know what a monster the DNC really is.

McConnell, “[I]t [anti-semiticism] seems to be more fashionable in this country regretfully, at least among some members of the new class in the House”

We speak English, Mitch. It’d be okay if you were to point to the three Muslim House members (Carson, Omar, Tlaib) whose religion has as a central tenet Jew Hatred, along with their rabid leftist supporters such as AOC and her claque.

What a weak POS.

Was the Turtle around during World War Two as well?? —

“…despite the collection of evidence and the prosecution of hundreds of Nazis – a judicial process that has been overshadowed by the trial of the Nazi leadership at Nuremberg – the Allied Powers did little to try and help those in peril. He said efforts by President Franklin D Roosevelt’s envoy to the United Nations War Crimes Commission (UNWCC), Herbert Pell, were pushed back by anti-semites in the US State Department.

Mr Pell would later claim that individuals within the State Department were concerned that America’s economic relationship with Germany after the war would be damaged if such prosecutions went ahead. After Mr Pell went public with the scandal, the State Department agreed to the prosecution of the Nazi leadership at Nuremberg, something that gathered pace after the highly publicised liberation of the concentration camps in the summer of 1945.

“Among the reason given by the US and British policy makers for curtailing prosecutions of Nazis was the understanding that at least some of them would be needed to rebuild Germany and confront Communism, which at the time was seen as a greater danger,” writes Mr Plesch.”
https://www.independent.co.uk/news/world/world-history/holocaust-allied-forces-knew-before-concentration-camp-discovery-us-uk-soviets-secret-documents-a7688036.html

On the Turtle’s watch. What a malignant clown….

Suuuuure they will. Afterwards they will get around to increasing border security and repealing Obamacare

If they won’t name names why bother? Whatever resolution meets with the approval of GOP “moderates” will be milquetoast and pointless.

Doesn’t the Senate have anything better to do than virtue-signal?

Ilhan Omar is on the House Foreign Affairs committee. She is threat to foreign relations and national security threat.

I’ll believe it when I see it. They also said they’d be voting on the Green New Deal.

That said, go ahead and do it, please, to put the Dems in the position of voting yes and siding with GOP or refusing and showing that again they will work with no one.

Because “racism” wasn’t a word when “antisemitism” was coined?

Technically, Mexican is an ethnicity not a race, so you can’t be “racist” against Mexicans or Hispanics or Latinos for that matter.