Rep. Omar on Obama and Trump: ‘One is Human. The Other is Really Not’

Rep. Omar on Obama and Trump: ‘One is Human. The Other is Really Not’

There she goes again. 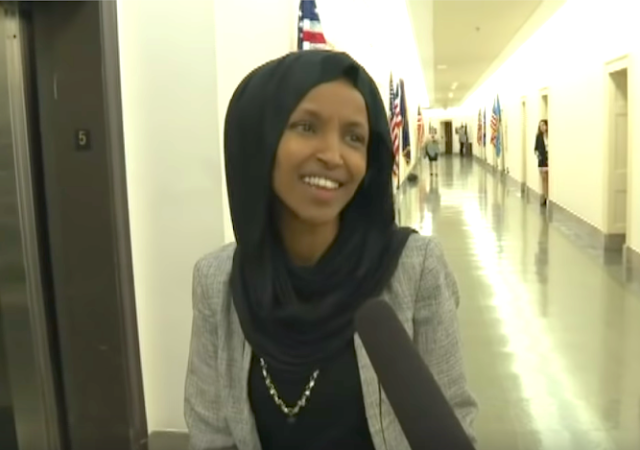 Omar attempted to clear her name with a recording of her interview, but she ended up owning herself.

So will she get it right on the third try?

A Fox News reporter waited outside of Omar’s office on Monday in order to get some clarification.

Omar told the reporter “it was ‘silly’ to compare” President Donald Trump and Obama because “one is human” while “the other is really not.”

Obviously Omar was referring Trump as not human. Can you imagine if she were called not human?

This is what Politico published on Friday:

After her remarks caused a slight ruckus, Omar shot back at Politico. She gleefully tweeted out that she had a recording of the interview, which she believed would clear her name.

It did the exact opposite and she deleted the tweet.

So @Ilhan Omar has released audio of what she said about Trump and Obama. She claims she was quoted out of context and that she’s an Obama fan. Here’s the transcript. You be the judge. cc: @blakehounshell @TimAlberta pic.twitter.com/a3IKhh5bAZ

Exhibit A of how politicians use the media as a straw man to avoid owning what they said.

Your tape…supports what I wrote 100%. So does my longer tape. It’s beyond dispute.

Next time, a phone call from your office before the Twitter ambush would be appreciated. https://t.co/eb2grgn5Cd

“one is human” while “the other is really not.”

And one is the President of the United States, and the other is really not.

notamemberofanyorganizedpolicital in reply to tom_swift. | March 12, 2019 at 2:34 pm

Which best fits a definition of being human? Someone who sets an enemy soldier on fire inside a cage to watch him die or someone who signs a bible and hugs a hurt homeowner while they cry?

That Bible thing is ridiculous. Someone who has just been through a terrible experience hands Trump a Bible and asks him to sign. What was he supposed to do , refuse?

Obama signed Bibles. Don’t you remember all the kerfuffle the media raised about that?

Yeah, me neither. What a surprise.

I will simply point out if the Bible-signing was the most anti-Trump news of the day, our press is now scraping the bottom of the barrel to the last, few molecules of wood for anything to sustain its Trump Derangement Syndrome.

notamemberofanyorganizedpolicital in reply to Leslie Eastman. | March 12, 2019 at 2:35 pm

In other words….we have a “bottom of the barrel” press….

I am certain that any accusation that the press response to the notion that it has reached the bottom of the barrel will be “hold my beer”.

Omar sets a new standard for a Representative. The lowest ever.

According to the Babylon Bee – from now on Rep. Omar will reply to any questions with the single phrase, “I am Groot.”

That maggot Rashida Tlaib is right behind.
Cortez is next, and Pelosi is alongside them.

Between this sorry excuse for an American and that other sorry excuse ‘AOC’, the Red/Green coalition is made. Toss in the Congressional Black Caucus that backs these two shrews to the hilt and there begins an orchestrated color divide. Red/Green Black. Toxic.

So Omar thinks Obama is not human? lol. Omar really better stop dissing Obama like this, or her Dim supporters are going to get mad.

If you wanted to take it the other way, like @Observer notes, that is a racist attack, calling an African American “not really human.” Think about it…….

That was one of the many justifications in history for enslaving the Africans–they were sub-human, a lower form of life, like animals. #JustSaying

She is digging…….. I just hope enough people get angry enough to get out and vote to remove these cretans from office, and ensure Trump a LANDSLIDE victory in 2020!

Flip the House–again! Give the Senate a super-majority! Stop this nightmare…..pull us back from the brink!!

I do wonder if there is any significant regret among those who voted in the Socialist-Democrat majority in the House. Probably not, many/most voters in the US seem to not care enough to bother to spend five minutes learning about those for whom they vote.

“”That was one of the many justifications in history for enslaving the Africans–they were sub-human, a lower form of life, like animals. #JustSaying””

Given that the Muslims ran the slave trade, that attitude on her part is understandable.

Understandable, perhaps, but quite despicable.

She is the face of the Democrat Party: full of hate, putrid on the outside, but with a toothy smile and a mask of semi-attractiveness that hides the horror beneath, that slips when she opens her mouth. Same with AOC and Tlaib–anti-Semitic, evil…all with masks on.

No wonder Nancy had such fear in her eyes. She sees the Frankenstein monsters she and her cronies have created, and fears she cannot contain them.

Schadenfreude? Perhaps. Karma? Maybe. But we are the ones they ALL target.

Here’s a follow up question : “Do you think that Jews are human?”.

Good grief. Her 15 minutes of fame is starting to seem like an eternity. Make it stop!

No. Please keep covering the Anti-Semitism that she and her sisters are spouting.

AOC just sent out a fund raising letter calling for a severing of the ties between the US and Israel.

She and AOC are such empty vessels people who haven’t already will soon stop taking them very seriously. The only advantage to what you describe is getting the other Dems on record about it. However, I don’t expect their vacillation will last long. They will soon learn to rebuke as needed. And then all of the AOC/Omar noise becomes wasted air.

The gift that keeps on giving!

Meh. In ten years Omar and the rest of the MSM/DNC axis will discover a Strange New Respect (TM) for Trump like they did for Nixon, Ford, Reagan, Goldwater, Bush I, Bush II, McCain, and Romneycare. Meanwhile, anyone whom the GOP might nominate to run for President will become Hitler.

In part, Obama was born to a Muslim and considered a member of the Ummah.

notamemberofanyorganizedpolicital in reply to Edward. | March 12, 2019 at 2:38 pm

Is that part of the Ubangi Tribe?

Omar has the corner on recognizing inhumanity.

This is her attempt to chum the media sharks with their preferred diet.

This woman is simply evil.

Never trust anyone who marries her own brother and who wears a pillowcase on her head.

The difference between this worthless muzzy goatherder and Donald Trump?

One is an American, and the other is not.

One is an American, and the other is an oxygen thief and a waste of protoplasm.