Elizabeth Warren running scared, admits “shouldn’t have done it” after heckled over lying about being Native American

Elizabeth Warren running scared, admits “shouldn’t have done it” after heckled over lying about being Native American 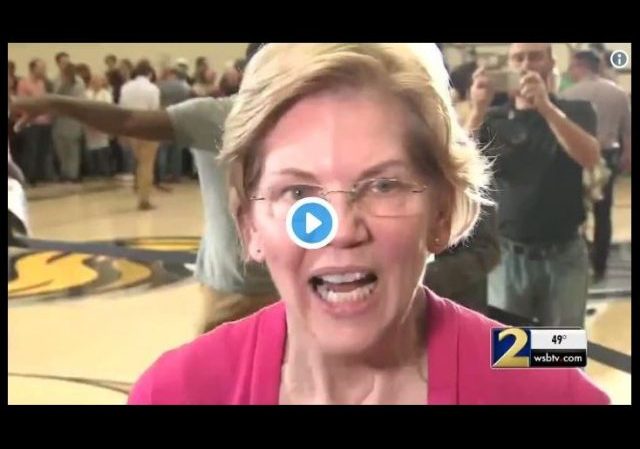 Senator Elizabeth Warren (D-MA) is on the 2020 campaign trail, and she is quickly learning that there is no escaping her well-documented ethnic fraud in repeatedly claiming to be Native American, apparently to further her career.

While attending a campaign event in Georgia, Warren was heckled by a man who shouted “Why did you lie?”  Holding up a sign with “1/2020” written on it, the man repeatedly shouted at her as he was escorted out of the venue by security.

Democratic presidential candidate Sen. Elizabeth Warren, D-Mass., was once again reminded that she exaggerated her Native American ancestry and was heckled during a campaign stop in Georgia.

While introducing herself to a crowd of about 1,000 supporters in a Lawrenceville high school, a man shouted “Why did you lie?” Warren replied back “Be easy, be easy,” while the crowd chanted her name and clapped.

The man was holding up a campaign sign that read “1/2020” as he was quickly escorted out of the building. Warren released DNA results examining her possible Native American ancestry last year in response to criticism from Republicans and President Donald Trump.

Warren already heckled by someone in red shirt holding a "1/2020th" sign. Escorted out of the gym while the crowd chanted "Warren!"

The “1/2020” is clearly a reference to the most infamous of her many botched attempts to disappear her Native American problem.  In that disastrous attempt, she took a DNA test and then gleefully released the results as vindication of her claims.  The problem?  The test showed that she is 1/1,024 Native American, or to put it in context, less Native American than the average American of European ancestry.

WSB-TV interviewed Warren after the event and asked her about claiming to be a Native American.  She said she’s already apologized and said she “shouldn’t have done it.”

In an interview after her stump speech, Klaus asked Warren about identifying as a Native American in the past.

“I shouldn’t have done it. I am not a person of color,” Warren said. “I am not a tribal citizen, and I’ve apologized.”

Warren was heckled at the event by a man holding a 1/2020th sign, apparently yelling "why did you lie" about having Native American heritage. She was asked about her previous claims afterward, said again she "shouldn't have done it" (footage from @wsbtv)https://t.co/lCyCMcogWj pic.twitter.com/jbYL6DhmTw

I have no doubt at all that Warren, now running for the 2020 Democrat presidential nomination, wishes she hadn’t “done it” . . .  for the almost two decades that she did just that.

If a Republican had made the claims she had made and failed the “test” as she did, the Democrats would hire activists to dress up as Native Americans to heckle them wherever they campaigned.

If a (R) had done this, that (R) would be ostracized out of the public eye faster than it took me to type this sentence.

“I am not a tribal citizen, and I’ve apologized.”

“Tribal citizen”? I don’t recall her ever being dumb enough to claim that. Her crime is the bogus assertion of Affirmative Action status, and an entire career as a fraud. And it’s not clear how she could apologize for that.

Absolutely she claimed to be a “tribal citizen.” She claimed for decades to be Cherokee.

The forms said “American Indian” or “Native American”. I have yet to see “Cherokee” written out by her on any AA paperwork. Throwaway quotes to the press, sure, but that’s not the important part of her career of deception.

Amazing how liberal ALWAYS come out as the real racists.

Conservatives try to teach people how to fish so they can feed themselvse for a lifetime, and liberals give them fish tin order to enslave and use them.

Wake up, black Americans: you have been used and abused for generations. Remember, it was the Republican Party (the party Lincoln that freed the slaves; the democrat party was the party of the KKK.)

Great headline. “Running Scared” can be her new campaign name. Fauxcahontas has too many syllables.

Funny, she looks pretty red-faced in the video… or am I imagining that?

I thought the crowd was chanting kool-aid kool-aid.

Oh come on now. If the dingbat baby killing governor of Virginia is a racist because he appeared in black face in his medical school yearbook—-let that sink in. I’m sure that somewhere Liz Warren has a high school yearbook from her year attending school on the rez showing her dressed up as a Cherokee Princess. So she’s an Indian by the Northam standard. Good enough for me.

Conservatives are just silent on it now because of the primaries. If she miraculously wins the nomination, it’s a best case scenario.

She’s Hilary 2.0 with a big pile of baggage of her own. She doesn’t get out the minority vote and move the needle on that side at all.

OK. Progress. She admits she should not have done it. So the next question is how much she must forfeit in reparations. The timing of that question will determine when she disappears from politics. ROFL! Trump owns her.

How to fend off a heckler. Experts claim one should raise their arms and growl and make loud noises while slowly backing away from the heckler or pack of hecklers.

My white daughter is more Native American than Warren: graduated from Central Michigan University (Chippewas), drives a Jeep Cherokee, even worked at an Indian casino as a college student.

The immutable truth of the matter is that Elizabeth Warren would never have made such ethnic claim had there been NO incentive for her to do so.

At every opportunity for her to have abandoned her pursuit of racial or ethnic opportunity she has doubled down on her intention to deceive.

Left to her own abilities and capabilities, Elizabeth Warren has no demonstrated competitive advantage in a competitive market place.

The woeful miscreant has lied about matters as trivial has having breast fed an infant while competing as female among in an “unfair” standardized bar exam in New Jersey.

Nobody knows the trouble she’s seen. And, yet she persists.

Hell, it wouldn’t surprise me if she actually picks out her own outfits to wear, most days of the week! Even Kamala Harris has CNN trying to “dress” her for success!

There is no lie that Elizabeth Warren does not believe. The Kennedys ain’t got nothing on Warren in the market of family entitlement.

Fauxcahontas be getting some slings and arrows.

She’s disgusting, corrupt garbage, and deserves unlimited shame and shunning. If not prison.

She got where she is by lying. Now after getting decades of benefit from that lie she wants to simply apologize and move on.

Love the dog-whistle of heckler was “wearing a red shirt”. Not as good as a MAGA hat but still!!

notamemberofanyorganizedpolicital | February 18, 2019 at 9:22 am

If that is security then she has been given the absolute bottom of the barrel by the Secret Service. Guy in blue is wearing an adipose vest. 😉

Let’s not understate Warren’s declaration that you didn’t build that, you don’t own that and, dammit, you owe me.

It doesn’t take any bravery to say she shouldn’t have called herself an Indian now. The fact is she is a nobody without affirmative action and now that she is past that stage of one in the crowd she can easily say “Oh I should have gotten into the Harvard facility the od-fashioned way on my merit which would have been just as easy” LOL. Does anyone see anything but a grifter in this woman? Maybe worse than the Clintons on that score.